Nizamuddin, the Newest Chapter in the Assamese Distrust of the 'Miya'

The ease with which an Islamophobic narrative of the pandemic is building itself within the state of Assam is worth exploring. 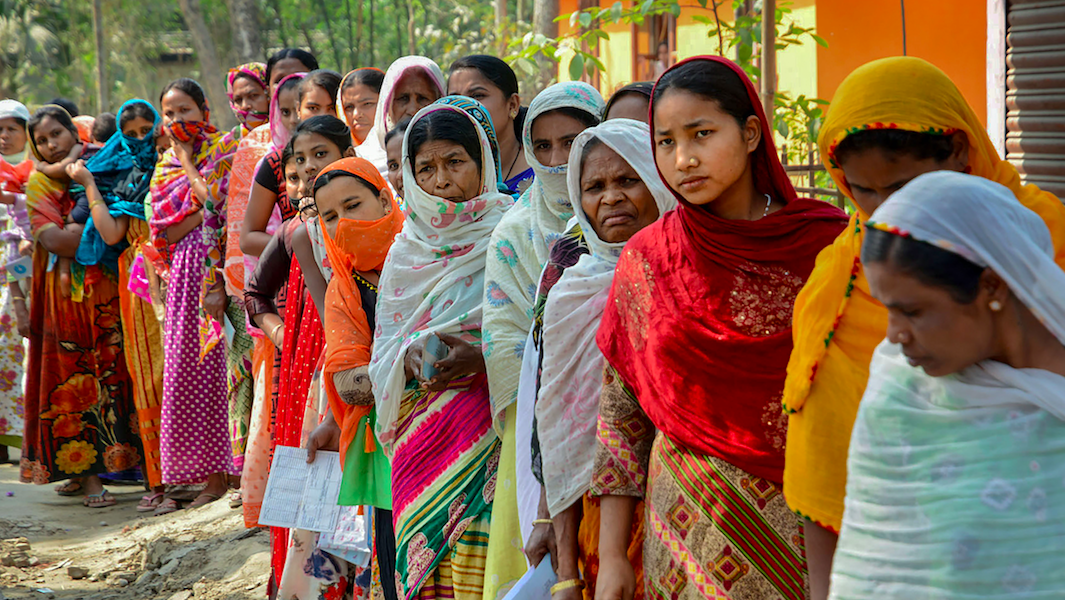 Women line beside a bank in Assam's Kamrup amidst the coronavirus lockdown. Photo: PTI

Note: The word ‘miya’ is used in this piece as the word used locally in Assam to refer to Muslims of Bengali origin. Often used with a derogatory tone, the use of the term here is not intended to hurt any sentiments or indicate disrespect, but merely to provide necessary context. The term ‘Assamese’ used here denotes the indigenous, predominantly Hindu, population of the State. However, the author does not claim this to be a comprehensive definition of the term ‘Assamese’ itself.

The recent incident at Nizamuddin has sent the average Assamese into a tizzy.

A state that had so far been patting the backs of its ministers (the same ones who were until now being deeply criticised in relation to the contentious Citizenship Amendment Act, 2019) for maintaining a “zero confirmed case” status for the state, is suddenly worried of what the miyas might bring.

Or like they say, what the miyas will bring.

Until March 31, 2020, no confirmed cases of coronavirus had been reported in Assam.

However, following the death of six persons in Telangana who attended a large religious congregation of the Tablighi Jamaat at its New Delhi headquarters in Nizamuddin, the scenario has dramatically transformed. Official disclosures made on March 31, 2020 initially revealed that approximately 456 persons from Assam had visited the Nizamuddin area between March 13-15, 2020.

The state government has since actively been engaged in tracing these persons and as per a statement made by the health minister on April 6, 2020, while about 500 persons who attended the gathering have been traced, other attendees from the state have been directed to report themselves or face legal action. As of April 6, 2020, 26 positive cases of coronavirus have been detected in Assam, a majority of which have been linked to the Nizamuddin gathering.

The reaction that has followed the revelation of the Nizamuddin congregation as a hotbed of COVID-19 contamination, can be split into two strains:

First, on the justifiability of a mass congregation at a time when there was sufficient alarm already raised about the spread of the virus gaining momentum.

Second, the immediate (and at this point, unsurprising) communalisation of the whole debacle as being almost a handcrafted, premediated terrorist act by the Tablighi Jamaat. 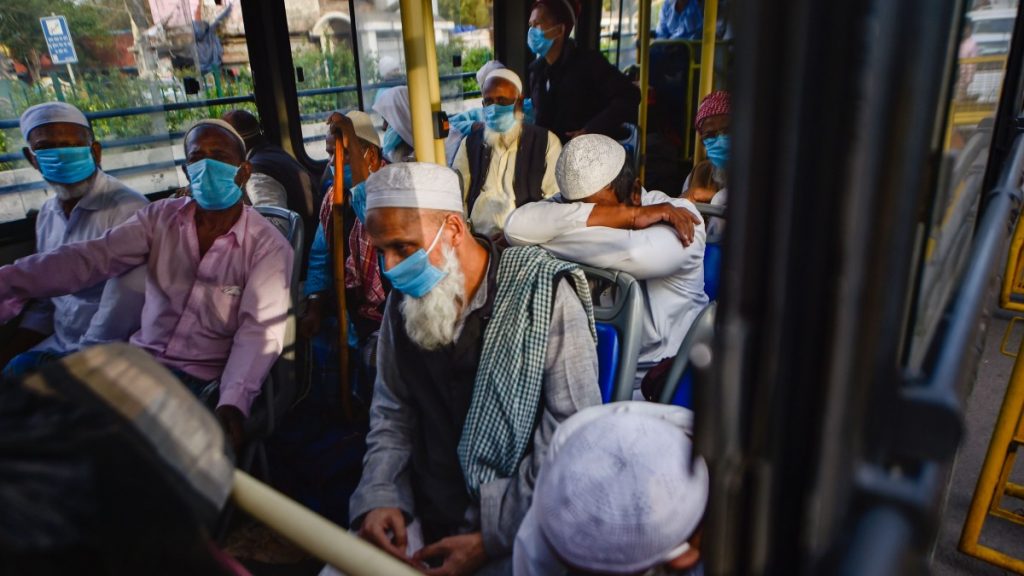 On the first, legitimate criticism lies in view of government directions against mass gatherings already being in place, although questions remain as to whether the event was held entirely outside of the government’s knowledge. At this point, any justification may seem bleak where there has been an undisputed dereliction of public responsibility. What is sought to be explored herein, however, is the second question.

While several accounts and critiques are already in public discourse with respect to the country at large, the ease with which an Islamophobic narrative of the pandemic is building itself within the state of Assam is worth exploring. This is especially so when viewed in the context of the otherisation that Muslims of Bengali origin in the state have now experienced for a while.

I draw much of what is said from this point onward from personal encounters and observations – in person, on social media and elsewhere; recently in the wake of the Nizamuddin incident and for years prior having grown up in the state.

Over the past four days, targeted social media posts by some Assamese people making statements such as “if you went there, then why didn’t you stay there and die”, “amaak miya bure xex koribo (the miyas will be the end of us)”, “eibure sapha thakibo najaane (these people have no sense of hygiene)”, “at least Hindus don’t hide their devotees in temples defying government directives” , “these fanatics are causing a biological bomb blast”, have been numerous.

These posts are representative of a long-existing, complex, deep-seated bias of class and religion against ‘the other’, the other that is almost always a ‘miya’ in Assam. Over-the-balcony discussions of neighbours such as one saying “as long as miyas are there, there won’t be peace” and WhatsApp forwards of friends and family have only further exhibited these prejudices.

Among these messages, are videos calling out the Muslim community at large and attendees of the ‘Islamic congregation’ (emphasised as such repeatedly) in particular, as being spreaders of disease and hate, ‘lockdown-cheats’ and ‘dangerous’. Several videos, which were later found to be old and unrelated such as one where a few Muslim men are seeing licking utensils and another where they are seen sneezing, have also been in circulation. 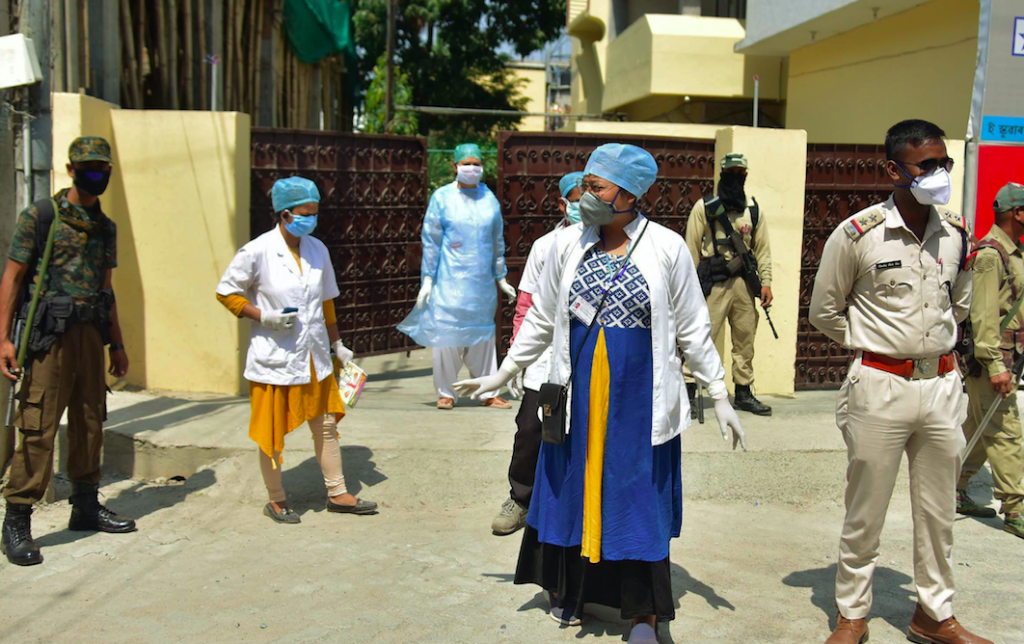 Officials at the house of an Assamese man found to have been COVID-19 positive. Photo: PTI

The undertones of violence in reporting, with local news headlines referring to the Nizamuddin incident as a corona ‘timebomb’, are also deeply concerning.

Undeniably, these incidents (which are not exclusive to Assam) cannot be taken as sufficient basis to presume that these sentiments are actively shared by the entire Assamese population; yet, they must suffice to alarm even the passive, otherwise harmless, non-participant of what is symptomatic of a long-nurtured culture of hate and suspicion.

Despite class operating as an equally significant facet of the day-to-day discrimination cited above, the structural prejudices of religion are unequivocally clear.

In recent times, what has historically been an anti-outsider sentiment has rapidly transformed into additionally being an anti-Muslim sentiment under the concerted aegis of the ruling government. The Assamese did not protest the National Register of Citizens (NRC) till its implications became intertwined with the Citizenship Amendment Act, 2019, an approach that has itself been criticised as being ethno-fascist.

While the NRC was criticised in terms of implementation, it was still seen as a somewhat effective segregation of the ‘outsiders’ from the Assamese. Put differently, it did not cause any discomfort when the implied understanding of the NRC was that a mass population, predominantly Muslim, would be rendered stateless; but when the CAA opened the back-door for non-Muslim outsiders, the anxiety of the Assamese became palpable.

This reaction in Assam, which stood in contrast with the country-wide protests which condemned both the NRC and the CAA, is often cited as proof that the average Assamese is in fact not anti-Muslim, but only anti-outsider. While an anti-outsider agenda remains unjustifiable when pushed at the cost of grave human rights violations, this narrative becomes further unconvincing when one religious segment is accused of organised disease spreading at a time when the line separating outsiders from non-outsiders is blurred.

I found it both interesting and unsurprising to hear from a friend recently that Muslim woman named Saleha [name changed], a daily-wage earner who did domestic work at a number of households in a residential society, was renamed “Mamoni” (a popular Hindu Assamese name) by mutual agreement of some of the residents. The comical tragedy of class superiority that allows us to assign identities to others aside, this was done with the motive of just somehow making Saleha’s existence and services more palatable.

Similarly, in incidents of theft and suspected theft, the suspicion, much like elsewhere in India, is primarily on the person lying lowest on the class hierarchy. But in Assam, if there is a ‘miya’, who lies at the intersection of both class and religious prejudices, they are definitely more susceptible to being accused of the offence, with phrases like ‘miya bur soor’ (Muslims are thieves) often being casually thrown around.

Similarly, it is not unusual for a relative to suggest against a halt, when your car passes through a village of pre-dominantly Muslim population in view of ‘safety concerns’.

I apprehend potential criticism that these descriptions are an exaggeration of ordinary, harmless situations; or depict a complete oversight of a history traceable to the linguistic disputes partition of India; or the undermining of what has been an ever-expanding threat to Assamese culture and identity.

But here is what the fear is: when we are brought up in households, and have extended families which view a certain people as being naturally prone to committing criminal offences, as being the ones who have constantly deprived the native Assamese people of what is rightfully theirs or as those who are, by birth, of a sinister mind, a process is kickstarted. These perceptions taught, seen and learned, form the bedrock of what later manifests as unfounded religion-based hatred.

We grow into adults who say with ease that death, severe beatings and mass genocide must befall persons who commit the same recklessness (in the immediate context, the Tablighi Jamaat gathering) that members of the majoritarian Hindu religion (in the immediate context, Shivraj Singh Chouhan’s oath-taking as the chief minister of Madhya Pradesh, gaumutra parties, Yogi Adityanath’s participation in shifting of the Ram idol at Ayodhya) have committed and continue to commit with impunity. We begin to assert with conviction that some lives are more important than others. What transpired from the Tablighi Jamaat congregation is unfortunate and even more so for it having been avoidable. Yet the immediate, effortless condemnation of the ‘miya’ or an entire people is misplaced, unwarranted and dangerous. Recklessness no doubt causes harm and has in fact caused harm as seen in the upsurge of COVID-19 cases in India; but a religion by itself does not. In these grim times, where incidents of brazen communal hatred have seamlessly overlapped with a pandemic of unprecedented scale, it is imperative that ideas of what we see as threats and what we see as harmless are recalibrated.

The viewing of miyas as a threat to Assamese indigenousness has historically stemmed from the fear of trespass through the porous Assam-Bangladesh border, the consequent economic overburdening and ethno-linguistic dilution of Assamese Hindu culture.

A compelling empathy-based justification for regulation of immigrant entry in view of the prolonged subversion of indigenous people’s right to self-determination also exists, which perhaps deserves a separate discussion of its own. Yet, the right to self-preservation is, at best a weak justification for derogation from basic human rights obligations of the state (as has happened in the NRC exercise and the consequent detentions).

Be that as it may, the current temperament has failed to ask the right questions even from the perspective of this self-preservationist agenda. The Assam-Bangladesh border continues to be permeable even after completion of the NRC.

Simultaneously with placing the entire burden of the corrosion of Assamese culture and heritage on largely the Bengali Muslims (despite the fact that a large part of the Assamese economy rests on the labour of the migrant Muslim population), no real enquiry on state measures taken to ensure checks on border permeability are being carried out.

With the track record of the present government, rehabilitation of those rendered stateless remains a far cry. Post-entry identification of immigrants, followed by them being rendered stateless (on the basis of hugely-classist, document-based tests of citizenship), further followed by them being dumped into concentration-camp like detention centres, is hardly how a progressive society should engage in indigenous identity preservation.

In the absence of the necessary questions of governmental accountability being raised, directing our collective scorn at the ‘miya’ (while clanging utensils as a community spirit-lifting exercise) will achieve nothing – not for identity-preservation and certainly not for COVID-19 eradication.

Rakshanda Deka is an advocate practising in New Delhi.