At New York's Times Square, Both Celebrations of and Protests Against Ram Mandir 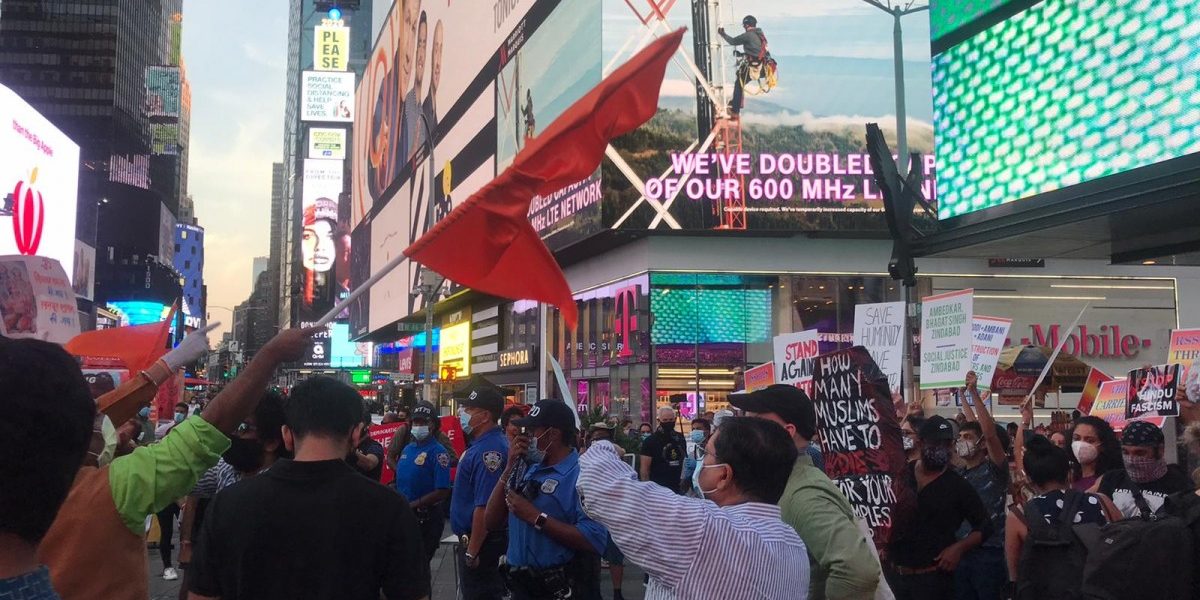 Two groups of protestors try to drown each other out at Times Square. Photo: Pavni Mittal

San Francisco: South Asian diaspora groups converged in New York’s Times Square on Wednesday, some to celebrate the construction of a Ram temple in Ayodhya and others to protest it and draw attention to the situation in India. Both raised slogans, trying to drown out the other, and vocally declared their support and opposition to the bhoomi pujan ceremony attended by Prime Minister Narendra Modi, on the spot where the Babri Masjid was brought down in 1992.

While ambitious plans by the American India Public Affairs Committee, said to be a pro-Bharatiya Janata Party group, to project an image of the proposed temple on the prestigious Nasdaq screen in Times Square did not materialise, one digital board of the temple aired over the Hershey’s store for a limited part of the day.

However, many South Asian civil rights groups held protests against the temple, and other digital banners saying ‘Kashmiri Lives Matter’ and ‘Kashmir siege day’ also went up. Those protesting the Ram Temple at Times Square included a whole range of groups, including civil rights activists, Kashmiris protesting the year-long lockdown and Sikh groups.

According to Pavni Mittal, an Indian journalist based in New York, those celebrating the Ram Mandir, dressed in festive wear, danced and sang and beat dholaks, while free boxes of mithai were distributed. She said she was shocked to see so many people at the plaza, because she had got used to seeing the Square empty in recent months because of the pandemic.

A truck with images of the Babri Masjid on the sides went around Times Square. Protestors meanwhile held up banners with slogans like “Stand Against Hate” and “Join the Struggle Against Fascism”. Mittal said she found it somewhat “surreal” to watch both the celebrations and protests unfold under large images of Mickey and Minny Mouse.

Prominent protestors at Times Square included Zohran Mamdani, housing counsellor and Democratic nominee for New York’s 36th assembly district. He had urged New Yorkers to stand up to fascism in a series of tweets on Wednesday morning.

As an Indian Muslim whose family is witnessing the rising tide of fascism in India, I won’t be silent.

As New Yorkers who are no strangers to the rise of right-wing nationalism at home, none of us should be silent.

Join us tonight to bear witness, stand up & fight back. (8/8) pic.twitter.com/3HZtuVN4Eh 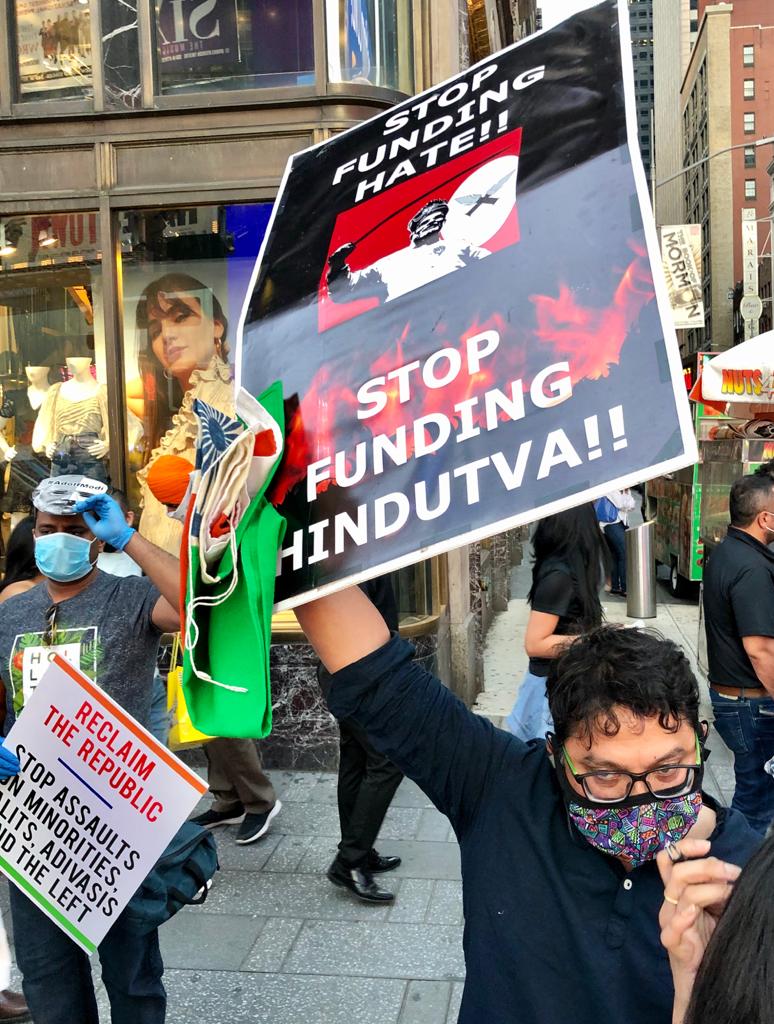 Protests against the Ram Mandir and Hindutva. Photo: Special arrangement

Jagdish Sewhani, president of the American India Public Affairs Committee, said to be associated with the BJP and RSS, was behind the effort of Hindu groups to ‘celebrate’ the inauguration of the temple’s construction. He was quoted by the Indian media as saying that images of the Ram Mandir would be beamed on prominent billboards across Times Square including the Nasdaq screen.

However, swift action by a hurriedly put together coalition of civil rights groups managed to prevent that from happening by lobbying with Branded Cities, the agency that handles the hoardings on the Nasdaq building. Representatives of the coalition had earlier told The Wire that they were informed by the agency that there were never any plans to air hoardings of the Ram temple.

“I was so proud to see our Ram Mandir and Ramji in Times Square today,” wrote Sehwani on Twitter, with the hashtag SriRamJiAt TimesSquare.

American writer and journalist Aatish Taseer responded with, “You promise us a great spectacle, all of Times Square, multiple images, resounding with images of Ram, and then you stick him in some side alley, like some musical being edged off Broadway?! I am deeply offended on behalf of Ram, who I happen to know personally. You are a disgrace.”

A coalition of South Asian civil rights groups across all religions, had spent the last few days campaigning against the proposed hoardings, including petitioning the mayor of New York city, Bill de Blasio. When the hoarding of the Ram Temple was spotted on the Hershey’s building, activists called the customer care line for Hershey’s. “I explained to him that this was a celebration of hate and bigotry. I told him that many people who lived in New York would not appreciate the hoarding,” said Raja Swamy of India Civil Watch

Sana Qutubuddin of the Indian American Muslim Council was particularly moved by passionate speeches made by teenage Muslim girls in hijabs who spoke of what the demolition of the Babri masjid meant for them. “It was as if Shaheen Bagh had come to life again,” she said.