For Urdu Publications, the Government's Default Setting is Suspicion

There has been much outrage over the NCPUL 'loyalty' form, with many prominent writers publicly condemning its circulation. 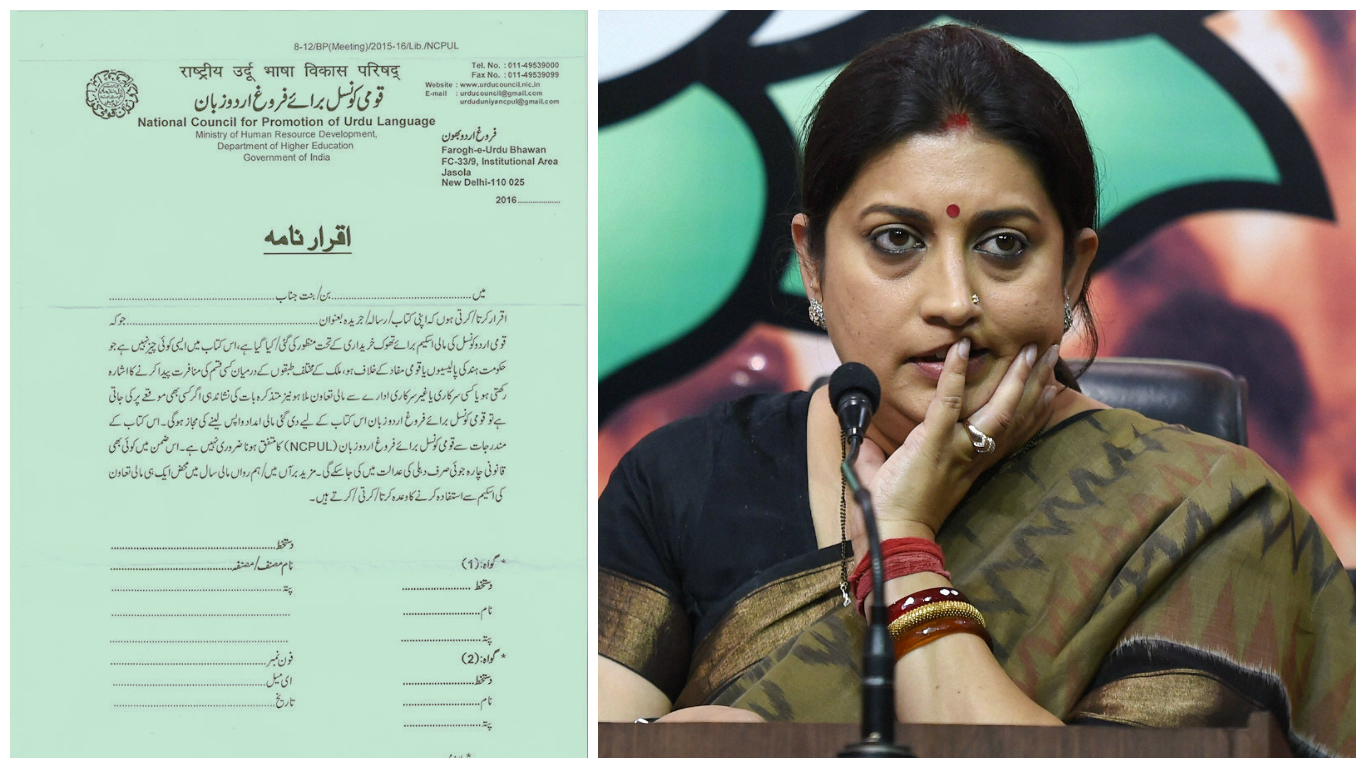 New Delhi: “Does this mean people writing in Urdu are the ones who will write anti-national things?” asks Shahnaz Nabi, head of the Urdu department at the University of Calcutta. Nabi received an unusual form earlier this week when the National Council for Promotion of Urdu Language (NCPUL) undertook to bulk purchase her book on literary criticism. The form, which has been criticised by many writers for a controversial clause which requires them to declare that their work is not critical of government policies. Here’s a rough translation of the text which is originally in Urdu:

“I, son/daughter of __________ do hereby declare that my book/journal/booklet _______________ , which has been accepted by the National Council for Promotion of Urdu Language’s scheme for financial assistance for bulk purchase, does not contain anything which goes against the policies of the Indian government, or anything that is against national interest, or anything which promotes disharmony between the various communities.” A copy of the declaration form that was sent to Professor Shahnaz Nabi. Credit: Rahman Abbas

It further states that the council could take legal action against the writers, and ask them to return the financial assistance they have been provided, if they do not abide by the declaration. It also requires the writers to get their form signed by two witnesses.

Nabi told The Wire that she never had to sign any such form in the past, nor has she heard any other writer being required to do the same. “Writers across the world, from all languages, have the freedom to criticise their governments. Why should we be made to sign such a declaration? Why do they demand it to be signed by two witnesses? This is an insult to the writers, and such interference won’t be tolerated. The NCPUL should withdraw the form immediately, and publicly clarify why it issued it in the first place,” she adds.

The NCPUL is an autonomous body under the ministry of human resource development (HRD). One of its major functions is to bulk purchase literary works, and many writers benefit from this as it is difficult for them to find publishers willing to publish their work.

There has been much outrage over the form, with many prominent writers publicly condemning its circulation. “They are confining the language Urdu – which belongs to the entire North Indian region to just Muslims and have no knowledge of History and the contribution of Urdu to the freedom struggle,” Noor Zaheer, author of the book My God is a Woman, told The Wire. “It is aimed at humiliating a section of the Indian population with the preconceived notion that because Urdu writers belong to a certain community, they would criticise the government, and hence should be doubted and would have to keep proving herself/himself a loyal citizen. A government is not the country, Criticism of any government is an important part of a democracy and this right cannot be taken away from the Muslims,” she added.  “It is disgusting that the present government is resorting to these steps because it has no other economic, social or political agenda.”

Zaheer is not alone in voicing these sentiments. “This is an undeclared censorship on poetry and literature. It says anything which is against government policies is unacceptable. Why are only Urdu writers asked to give such a declaration? It means the government looks at Urdu publications and writers with suspicion. It’s an attack on all creative work in society,” Shahid Siddiqui told The Wire. Siddiqui is the editor of the popular Urdu weekly Nai Duniya.

Abrar Mojeeb, a Jamshedpur based journalist who publishes a literary magazine called Raavi, also received the form recently. “I am fine with the objection to content that goes against national interest, but how can they ask us to not be critical of the government? This is an attempt to stifle our creative freedom,” Mojeeb told The Wire. “Modi and Amit Shah say that criticising the government is not wrong, but speaking against the nation is not good, and I agree with them on this,” he adds.

Writers from across the world have started voicing their concerns regarding this form, and a campaign against it is gaining heat on social media. “This decision, even if it was there for years, is undemocratic and an effort to turn writers into puppets of the ruling party. It is a duty of writers to criticise the policies of government and raise awareness about political and policy issues. We are planning to protest against the move and will continue asserting our demand that the HRD ministry withdraw this anti-art and anti-literature dictum which is nothing but a sign of fascism,” says Rahman Abbas, who has spoken to T.K. Rangarajan, a CPI (M) Member of Parliament from Tamil Nadu, and asked him to raise the issue in parliament. A copy of Abbas’s letter to the MP is with The Wire. Abbas is a published author, and his books have also been bulk purchased by the NCPUL in the past.

A report in the Indian Express quotes NCPUL director Irteza Karim responding to the controversy saying, “If a writer wants financial aid from the government, then of course the content cannot be against (the government). NCPUL is a government organisation and we are government employees. We will naturally protect the interests of the government.”

Karim’s statement also confirms that it was indeed a recent decision to circulate the form, “The decision to add this declaration form was taken about a year ago at a meeting of the council members, which includes members of the HRD ministry. The home ministry is also in the know of things,” Karim said. Justifying the need for the form, he was quoted as saying, “The council has to face many problems; sometimes books written by one author are submitted under another’s name and we get embroiled in legal issues. Since we do not have the manpower to scrutinise every single line of each book, this form helps us place the onus on the authors.”

Karim also said that the move was triggered by an incident last year when a book on Abul Kalam Azad put out some incorrect information. At the time of the publication of this story, both the MHRD and the NCPUL are yet to respond to The Wire’s query regarding the form.