The communal riots of 2020 are the opening shot in the BJP’s campaign to retain power in the states where it still rules, and of course at the Centre.

The mob which burnt these vehicles has a misplaced sense of patriotism because the national flag was never meant to be used to celebrate a crime. Photo: Shome Basu

Don’t be confused by the big media narrative of pro- and anti-Citizenship (Amendment) Act protesters or “two sides” fighting it out in the streets of Delhi. And for heaven’s sake don’t fall for the ludicrous claim made by the minister of state for home affairs G. Kishan Reddy that the continuing violence is a “conspiracy to defame India”.

As the death toll from the Delhi Riots inches past 30, we need to remind ourselves that until violence was cynically unleashed on the women and children protesting the Citizenship (Amendment) Act in different parts of North East Delhi – most of whom are Muslim – the national capital had witnessed 70 days of peace.

Throughout the 70 days of peaceful protest across multiple locations, there were no mobs on the rampage, no stone pelting, no burning of shops and homes. Only people sitting on dharna, surrounded by the national flag, copies of the preamble of the constitution and portraits of national icons like Dr B.R. Ambedkar, Mahatma Gandhi and Maulana Azad

So why did violence suddenly engulf the city? Who willed it? Who allowed it to happen? By now, there is no dispute that the violence and communal riots of the past three days clearly followed the call for direct action against the protesters that was made by BJP leader Kapil Mishra in full view of the Delhi Police. And that the Delhi Police, which reports to Union home ministry, not only failed to clamp down on inflammatory speech but also on the violence when it erupted.

Egged on by Mishra’s words, a mob of Hindutva activists and lumpens attacked one of the sites of the anti-CAA protest in North-East Delhi. This was the ‘Salwa Judum’ model of vigilante violence imported to Delhi. An independent investigation will surely reveal the hidden hands involved in the mobilisation of the crowd because such mobs do not form spontaneously. Predictably, the protesters they viciously attacked – who had been sitting peacefully all the while – fought back. But there matters ought to have ended, if the Delhi police had done its job and the Union home minister Amit Shah, had done his.

The big media presented what was a violent attack on the anti-CAA dharna by a lumpen mob mobilised by Hindutva groups as “clashes between pro-CAA and anti-CAA protesters” but the ugly reality of what was really happening became evident that evening and the next day. If the crowds mobilised were driven only by their support for the CAA, why would they chant slogans like ‘Hindustan mein rehna hoga to Jai Shri Ram bolna hoga’? It was evident that the mobs which the Hindutva leaders had assembled had a different task – to intimidate and attack Muslims in general, spread fear and insecurity across Delhi and polarise the city and country on communal lines.

The fact that nothing short of a communal riot was being imposed on Delhi became apparent on Tuesday when mosques, Muslim shops and Muslim homes were targeted across a number of areas in North East Delhi.

In scenes reminiscent of the demolition of the Babri Masjid, thugs climbed atop the Badi Masjid in Ashok Nagar, Shadara, planted a saffron flag and then tried to break away parts of the minaret. They then torched the mosque. My colleagues Naomi Barton and Avichal Dubey were in Ashok Nagar and filed a quick story on the destruction of the mosque. The response of BJP supporters online was to claim the story was fake. No less a person than MoS Home Kishan Reddy demanded that action be taken against news platforms that published what he said was “fake news”.

This attempt to deny the ugly truth about what was happening to Delhi under the watch of the Modi government obviously could not last long. After all, The Wire had released video footage that its reporters had themselves been witness to. It then emerged that mosques were also attacked and burnt in Mustafabad. Worse, the meagre huts of poor working Muslim families  were destroyed by masked thugs shouting Jai Shri Ram. My colleague Raghu Karnad spoke to their Hindu neighbours who testified to this, and added that the arsonists threatened to kill them unless they too chanted Jai Shri Ram. 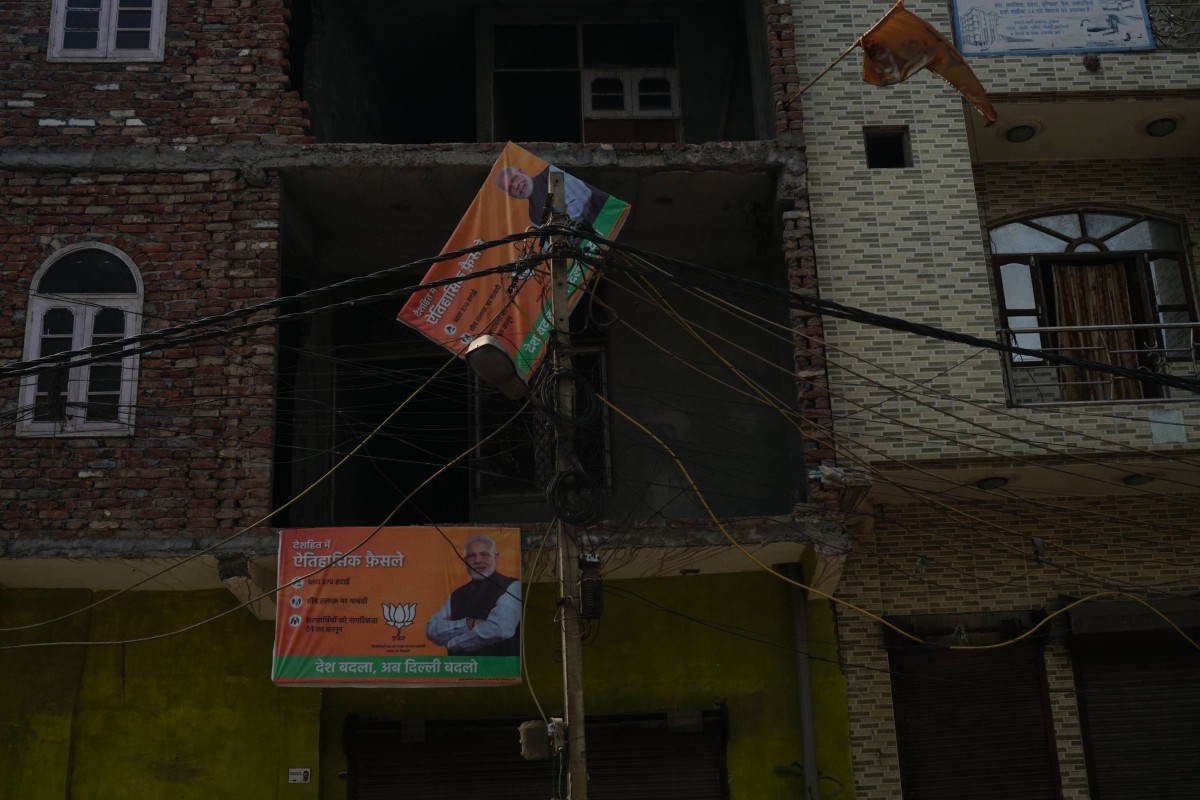 If it was possible for anyone in Delhi to still delude themselves that the government and police meant well and that they were battling some incredible conspiracy to “defame India”, the Delhi High Court’s order at 1:42 am on Wednesday should have cleared all doubts.

There were 20 odd riot victims who lay injured in a small hospital in Mustafabad –  the Al Hind Hospital – who needed to be transferred to the government-run Guru Tegh Bahadur hospital in order to receive proper treatment. The doctors at Al-Hind had been trying since 4 pm to get the police to provide an escort for ambulances to take the injured safely away since the Hindutva mobs were still threatening them. Sadly, the police offered them no help. In desperation, they approached the high court through a lawyer and Justice S. Muralidhar convened a special sitting in his house and ordered the police to provide the victims safe passage.

The same judge also pulled up the Delhi Police on Wednesday afternoon for failing to even take cognisance of the hate speeches of BJP leaders. He knew what he was talking about. After all, he was the one who finally sent Congress leader Sajjan Kumar to jail for the 1984 massacre of Sikhs. And perhaps that was why the Centre immediately notified his transfer to the Punjab and Haryana high court.

Also read: ‘Never Had Riots Here in 1984, 1992 Either’: Amidst Violence, Seelampur Emerges an Oasis of Calm

Is there a similarity between what has played out in Delhi over the past three days and earlier incidents of communal violence? Yes there is. We saw all of this in the capital in 1984 when the Congress-led government presided over the massacre of thousands of Sikhs following the assassination of Indira Gandhi. Rajiv Gandhi may have been a so-called “inexperienced” prime minister but his home minister, Narasimha Rao, was no babe in the woods and the Delhi Police had tonnes of “experience”. Yet they allowed more than 3000 people to be killed.

In Gujarat in 2002, Narendra Modi as chief minister presided over a state government that allowed more than a thousand innocent Muslims to be killed by Hindutva thugs. In both 1984 and 2002, the police were mute spectators to the violence because they knew the mobs had the backing of the ruling party. Delhi 2020 is no different.

Poison in the blood

A question many people ask is why would Narendra Modi, Amit Shah and the BJP allow violence to take place at a time when they were playing host to Donald Trump. Incidentally, the Congress government had no qualms about showcasing genocide on the streets in November 1984 even as world leaders gathered in Delhi for Indira Gandhi’s funeral but it is still worth asking why Modi et al. would they rain on their own parade. The answer is quite simple. Remember the story of the scorpion and the frog? A frog is carrying a scorpion across a river as a favour but then the scorpion bites the frog. As they both drown, the frog cries out, ‘Why did you bite me? We’re both going to die now’. And the scorpion shrugs his shoulder and says, ‘What can I do? It’s in my nature.’

The fact is that it is the BJP’s nature to polarise, even if its communal poison causes a PR disaster for India. For Modi and Shah, a US presidential visit is a one-off event but politics,  electioneering and vote-bank building are a continuous, never-ending process. The BJP fought the recent Delhi assembly election on a hard communal platform. They ran advertisements that were openly communal and BJP politicians freely circulated anti-Muslim memes and images on social media. The one consistent message from these images and words was that Muslims are traitors, traitors need to be shot. Unfortunately for the BJP, Delhi’s electorate did not succumb to this hate campaign, and though the saffron party’s vote share improved by a few percentage points it was still convincingly trounced by the Aam Aadmi Party.

In photos: Masjid Set on Fire in Mustafabad During Delhi Riots

But even in defeat, the BJP saw a political opening in the AAP’s refusal to openly confront its communal agenda. The party’s local leaders calculated that if we launch an aggressive movement against Muslims and stoke a communal riot, the Aam Aadmi Party will not be able to counter us because it cannot embrace the anti-Muslim rhetoric of the Hindutva parivar nor speak very aggressively against it. And in a polarised atmosphere, the BJP would be able to play to its sole strength once again.

When it comes to the BJP and Sangh parivar there is no such thing as an accident. Nor do they ever lose sight of the long-term. Everything the parivar does is well thought out and planned, with each person and organisation assigned the role he, she or it must play.

The communal riots of 2020 are the opening shot in the BJP’s campaign to retain power in the states where it still rules, and of course at the Centre. With the economy showing no signs of recovery, desperate times call for desperate measures, the people of Delhi be damned. There is no “Hindu side” and “Muslim side” to this violence, just a diabolical political plan to divide the people on communal lines. The riots of 2002 helped make the BJP electorally invincible in Gujarat. The work to bring this vital aspect of the Gujarat model to Delhi has begun in earnest.