Though both communities say 'outsiders' were responsible for the violence and arson, a sense of insecurity and chaos is palpable in the area. 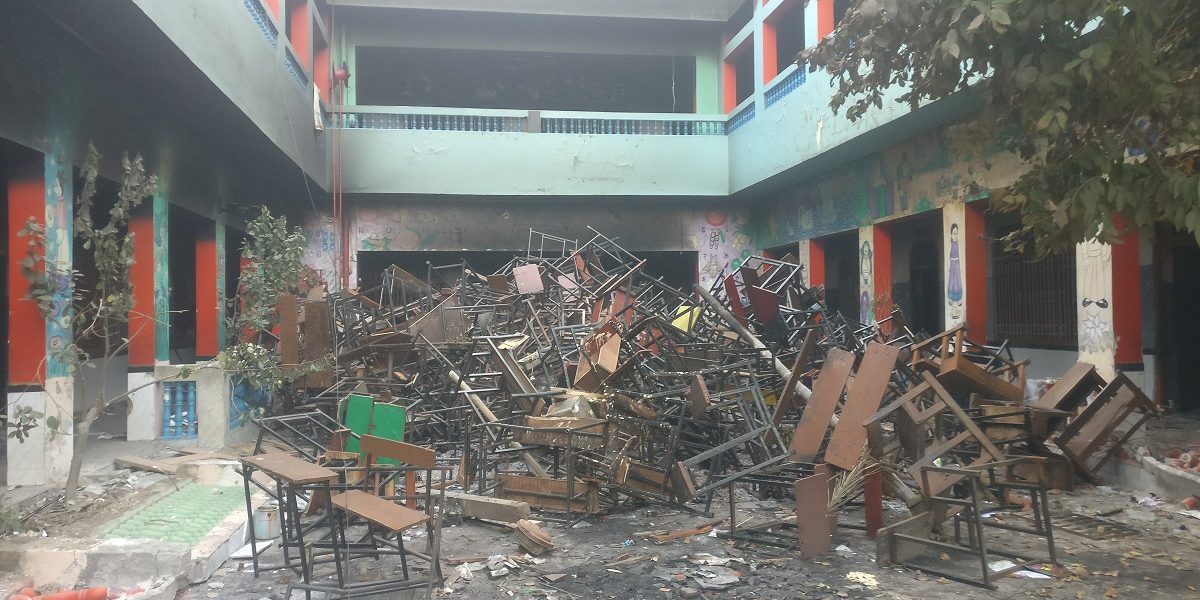 A school that was vandalised in Mustafabad. Photo: Ajoy Ashirwad/The Wire

New Delhi: The streets of Mustafabad bore a deserted look on Wednesday. Paramilitary troops and Delhi police personnel aggressively pushed onlookers back to their homes, even as a cloud of gloom pervaded the locality. It was clearly a curfew-like situation; shops were shut, most of them had anyway been burnt, people were worried about their food stock getting over. That tension was palpable would only be an understatement. Hindus and Muslims, who have stayed together in harmony for years, have suddenly become extremely fearful of each other.

Mustafabad, adjoining Brijpuri, Shiv Vihar and Bhagirathi Vihar, on the Loni border in northeast Delhi were few of the worst riot-affected areas. The scale of damage to property and lives has been much more than some of the other localities that witnessed mob violence.

At the Mustafabad-Brijpuri crossing, a mosque, named locally as Farooquiya masjid, which also functioned as a madrasa for orphans, had been set ablaze by a mob that rampaged through the colony on Tuesday evening. The acrid air was of the least concern for most residents who stood outside the mosque’s premises in shock and grief.


They claimed that many children were injured in the arson, while the maulana died of a bullet injury. Another imam of the masjid has been critically injured and is currently admitted at a government hospital.

At another end of Bhagirathi Vihar, a Hindu-dominated colony, the Meena masjid was entirely ransacked by Molotov cocktails, the smell of soot still wafting through the building. At another corner of the colony, an ironing outlet and a jeweller’s shop were also set on fire and were ransacked. Residents said that the owner of the jewellery shop must have lost property worth at least Rs 10 lakh.

Further ahead, two schools owned by Muslims have been ransacked. A few people were busy collecting pages from the school textbooks, destroyed furniture, shattered window panes and glass shreds strewn all over the building. “Nothing is left. They burnt down everything. We ran for our lives. They (the mob) did not care that this was a temple of education. What did they achieve by burning down a school, we don’t know,” one of the caretakers who was sorting out the mess said.

The two-kilometre stretch from Brijpuri to Shiv Vihar that passed through Mustafabad and Bhagirathi Vihar was full of bricks and stones, reminding the visitor of the mayhem that the locality may have seen on Tuesday. 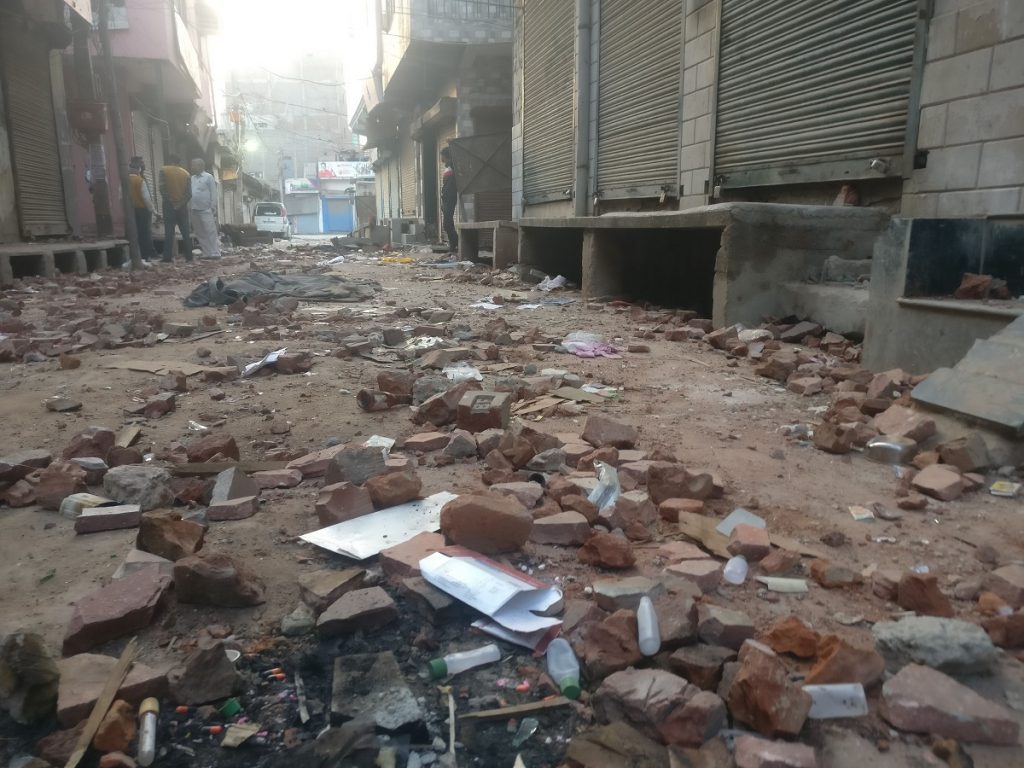 Just outside the Farooquiya masjid, the tent housed the protest against the Citizenship (Amendment) Act (CAA) for over two months had been entirely demolished. A hoarding that had leaders like Chandrasekhar Azad, Bhagat Singh, Mahatma Gandhi, Dr B.R Ambedkar printed on it had been torn to shreds.

“We had been protesting peacefully against CAA for so many days. But not once, a violent incident was reported. Those who disagreed with us could have just attacked the protest site. But they wanted to attack the whole community. What was the need to burn down shops, masjids and schools,” said Imran*, a bystander who claimed to be a witness to the rampant arson of the region. 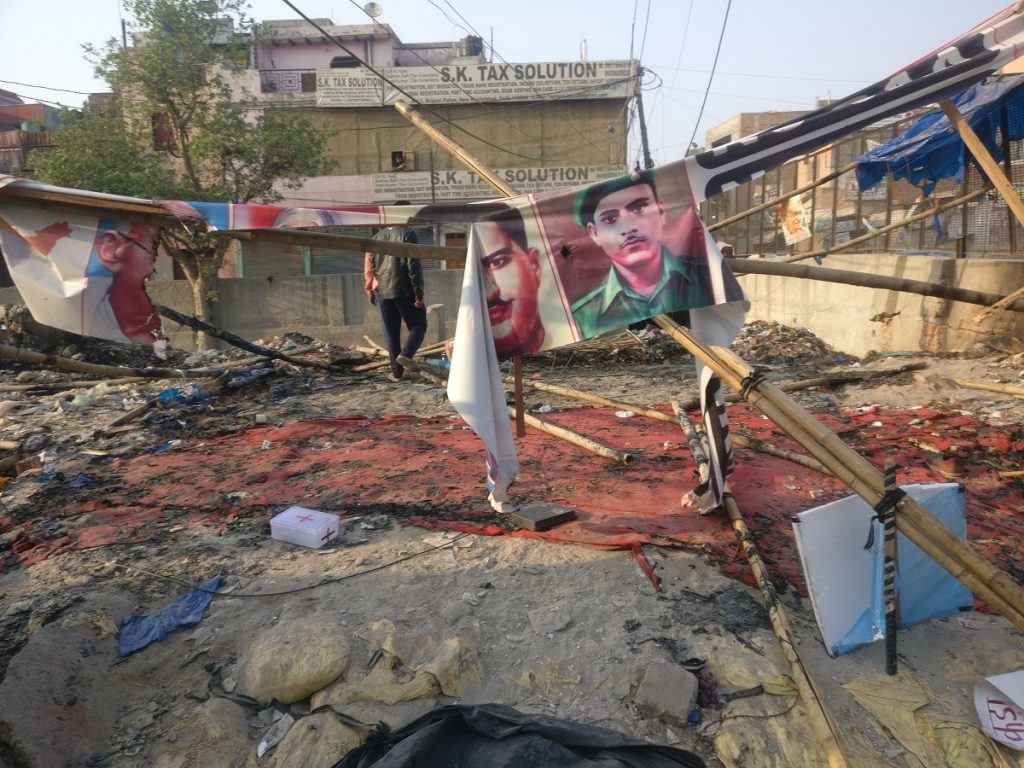 He claimed that the riot was engineered by the Rashtriya Swayamsevak Sangh (RSS). “Everyone in the mob was an outsider. They came from the main road, through Brijpuri, and went about beating everyone they found on streets and burning down properties they thought belonged to a Muslim.”

But some Hindu-owned properties were also damaged, I asked. “Yes, some among the Muslims also attacked the Hindu side of the area after the masjid was burnt. The RSS mob had guns, they fired and killed people. But the Muslims only pelted stones. They did not indulge in aagjani (arson). All the arson you see in this area was done by the mob. We could not recognise them as most of them were either wearing helmets or were wearing masks.”

“We had to defend ourselves. We did not intend to hurt any of our Hindu neighbours. You can come and see. There are three Hindu temples in our locality. We did not even touch them.”

In what was a rare oasis of hope in the hate-filled environment, the priest of the temple jumped in support of Imran. “We have been staying in Mustafabad for the last 28 years in perfect harmony. There are only two Hindu families in this street. When the mob descended into the locality, all my Muslim neighbours offered us shelter and gave us confidence that we need not worry,” said the priest.

He said that people of Mustafabad were scared but also relieved that the area did not witness any mob violence on the first two days of the riots (Sunday and Monday). “But everything changed on Tuesday. As all of us were preparing for our evening prayers, the mob suddenly attacked us. Many of us immediately left the main street and hid in the bylanes.”

“When we came out hours after the attack, our whole locality had been destroyed. Political parties are trying to encash the dividends from this riot, we will not let it happen,” he said, as he despondently looked at the mosque.

Both Hindus and Muslims claimed that despite their repeated calls to the police, no one turned up to save them. “The mob was full of people we had never seen. Probably, they were outsiders. We just waited and watched until they left. They were carrying bags full of bricks,” said Sushil Sharma*, a resident of Bhagirathi Vihar, as he pointed towards a sack that contained unused bricks.

But Sharma was one among the majority of Hindus who have become suspicious of Muslims. “I can’t trust them anymore. All of this has happened because of the anti-CAA protest,” he said.

“But the protest was peaceful,” I said.

“Yes, but this area had never seen any communal flare-up. This is the first time such a thing happened. And it is because of that protest,” Sharma said. 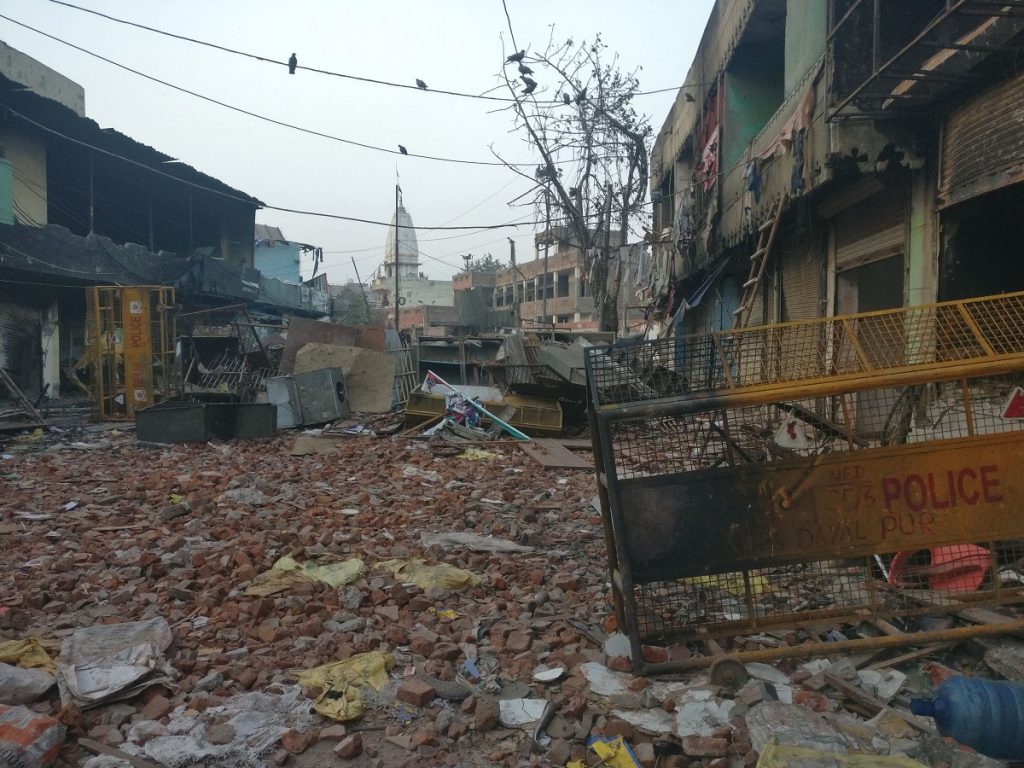 Meanwhile, since Tuesday, even as the paramilitary forces took over, scores of migrant Muslim workers have left the area with their families. “There is no milk to offer to our children. We do not have anything to eat. That is why we are going back to our native homes,” said one worker on his way to Anand Vihar railway station to catch a train.

The Wire caught up with another Muslim couple with a five-year-old and an infant from the Hindu-dominated Bhagirathi Vihar who were seen packing their belongings. When asked where they were going, Irfan* said, “We are shifting temporarily to (Muslim-majority) Mustafabad (which is on the other side of the street). It doesn’t feel safe here anymore. Most Muslim families from this colony have shifted to their relatives’ houses in Mustafabad.”

“We are scared. It is better to go and stay with our own people,” his wife Fathima* said.

Such temporary migration has become the order of the day in northeast Delhi. A narrow street separates Bhagirathi Vihar and Mustafabad. But the riots have distanced the two communities so much that even this 20-feet street seems too wide to traverse. 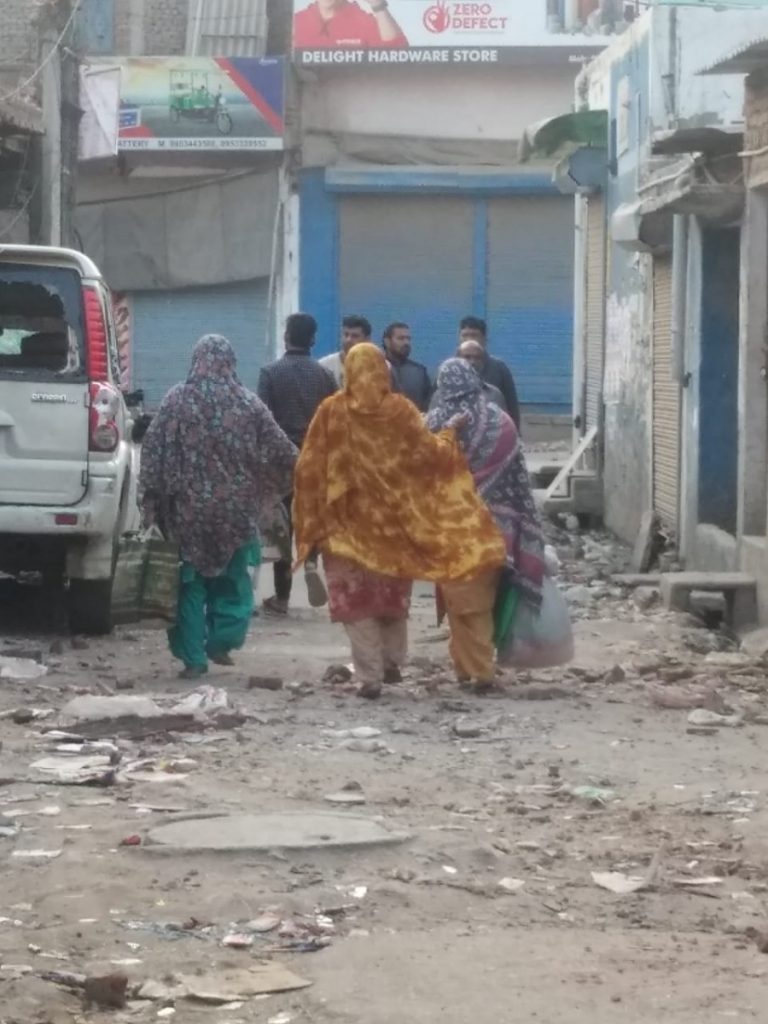 (Real names of people quoted in the story have not been used to protect their identities.)