Aqil Ahmed decided to try his luck and return home in Mustafabad. His last, panicky moments were relayed by phone to his friend.

As Mustafabad resident Aqil Ahmed’s body was wrapped in white and brought out for the burial on Sunday evening, family members wept and wailed, “Abhi Nahi (Don’t Go Yet).” Photo: Chitrangada Choudhury

New Delhi: On the afternoon of Wednesday, February 25, national security advisor Ajit Doval toured the violence-hit areas of north-eastern Delhi, and told residents and the onlooking media that “the situation is under control“. Later that evening, at around 6 pm, car washer and mechanic Aqil Ahmed (40) decided to set out from his in-laws’ place in nearby Loni, to get to his house in the affected area of Mustafabad.

Three days later, on Saturday evening, his family found his body among the ‘unknown’ corpses at the GTB Hospital. They told this reporter that a mob stopped Ahmed near the Bhagirath Vihar nallah, a kilometre or so away from his Mustafabad residence and lynched him that Wednesday evening.

On Sunday afternoon, in the warren of lanes in Mustafabad where Ahmed’s house is located in Galli Number 6, a large crowd gathered as his body was brought from the hospital and prepared for the burial. Family members shared with us a recording of a 2-minute call Ahmed made to his friend on Wednesday evening, while approaching Mustafabad. They said the call was probably Ahmed’s last.  In it, Ahmed’s friend can be heard telling him the situation is tense, and he should not have stepped out. Ahmed is heard telling his friend that he has entered the area, and it is up to God now. Ahmed then says “Hinduon ke beech mein phas gaya hoon (“I have been surrounded by Hindus”) and gets increasingly tense, asking the friend to just keep talking to him, and not cut the call. The call ends moments later. The friend could not reach Ahmed anymore, and his phone has gone dead since.

Also Read: Ground Report: ‘Normalcy’ Returns to a Corner of Delhi, But Fear and Grief Are a Step Away

Ahmed’s brother-in-law and car mechanic Mohammed Aslam said, “When we found Aqil at the hospital mortuary on Saturday evening, there were deep injuries on the back of his head and stab wounds all over the body.” A strained Aslam said, “Aqil was the family’s sole earning member, and they beat him to his death mercilessly. We want a criminal case to be registered and his killers to be brought to book.” As relatives brought the body wrapped in a white shroud out of the home to take to the burial ground, injury marks were clearly visible across Aqil’s face. Mustafabad resident Aqil Ahmed was lynched on the evening of February 25, hours after National Security Advisor Ajit Doval toured the area and said the situation was under control. Photo courtesy Mohammed Aslam

On Sunday, the neighbourhoods of Mustafabad, Shiv Vihar and Chand Bagh remained tense, as paramilitary and police personnel patrolled the main streets. As people opened the shutters of their burnt-down shops to gauge the extent of damage, municipal cranes towed away charred vehicles, and relief teams of civil society groups handed out rations. The unofficial death toll in the communal violence has now gone up to 49, including Ahmed. On the first floor of Ahmed’s house on Sunday evening, women and children gathered in mourning around his speechless mother, wife and children. “We are unable to sleep at night. We cannot think straight,” said a resident, Anjum, adding that her family’s shoe shop in Bhajanpura was ransacked by a mob. “My husband has a beard. He has not even gone to see the state of the shop – he is so afraid of what might happen, and if he might be murdered.” 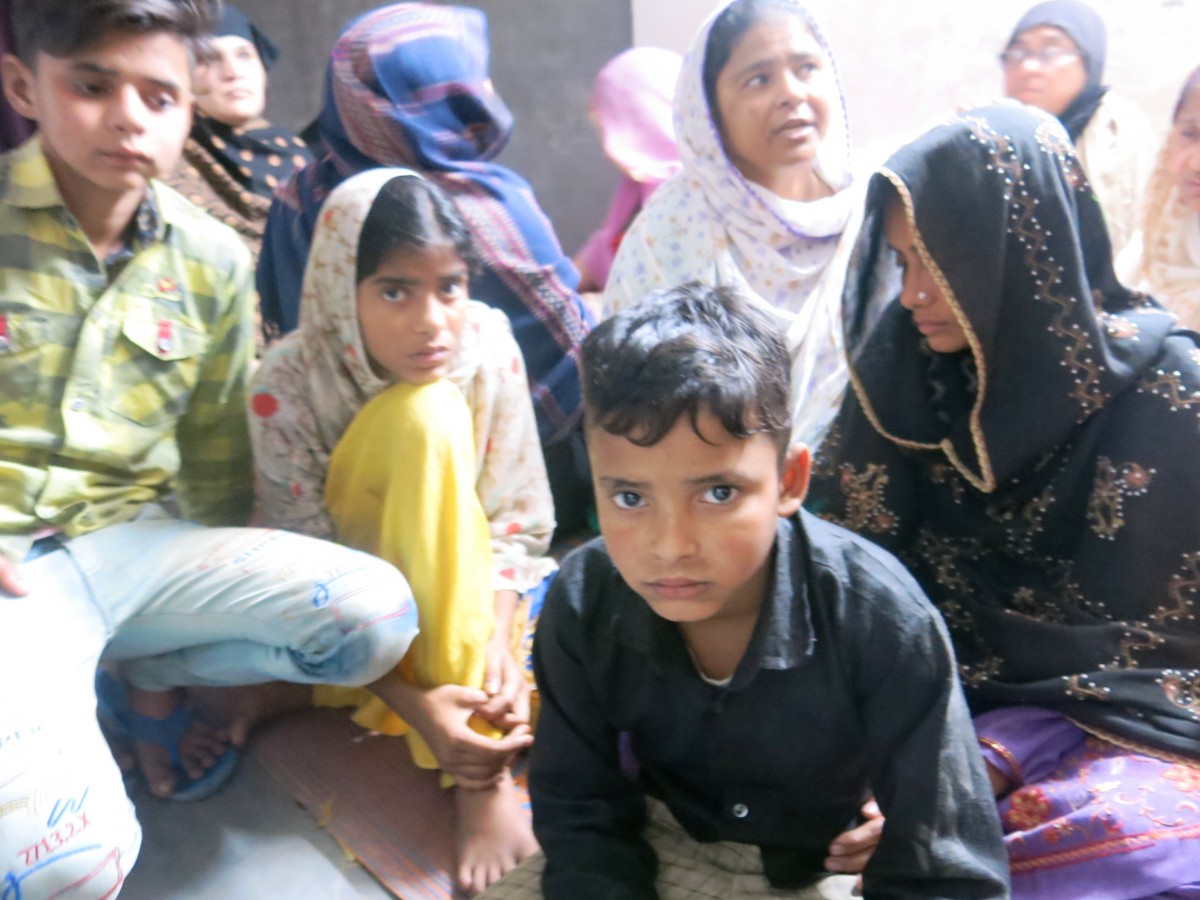 Ahmed is survived by his wife Zahira (in black) and school-going children, who last saw him on Wednesday evening, hours before he was lynched. Photo: Chitrangada Choudhury

Many men and women said that provocative speeches by BJP leaders like Kapil Mishra had led to the outbreak of violence. (See a detailed timeline from The Wire here.) “For two months we had been peacefully protesting against the CAA and NRC, and nothing had happened. Bhadkaau (incendiary) speeches by leaders like Mishra led to the attacks on Muslims, but even now the police has not arrested him,” said a resident, Noorjehan. Many seconded her as she said, “We do not want fights, we do not want violence. We have lost our men. At least now, there should be an end to this.” At the burial ground of the Mustafabad Idgaah, where Ahmed’s body was brought on Sunday evening, groups of men watched in silence. They counted out to us eight men who had been killed in the violence since Monday, and brought here to be buried.

Residents feared that the toll might be higher, given many families and establishments have people missing. The owner of a burnt-down godown Mohammed Danish, who was at the ground, said, “One of my workers, Mohammed Aftab, was at the godown when it was set on fire by a mob on Tuesday morning.” Aftab, who is a 21-year-old migrant from Bijnore district in Uttar Pradesh, has not been traced since, and his father has come to Delhi to hunt for him. Reports on Monday said he was fished out of a drain.

Also Read: The Laws That Could Ensure Police Accountability and How They’ve Been Ignored

Several residents said the drain running through the area should be dredged for corpses – the bodies of two brothers, Aamir Khan and Hashim Ali were recovered from here, as The Wire has reported.

“We are spending our days and nights in complete fear,” said scrap dealer Mohammed Shahid. He broke down as he narrated the violent events residents have been living through since Sunday. “Police bhi saath nahi de rahi – we cannot count on the police either.”