To say, as a serving police officer has done in a recent op-ed, that the “self-preservation of Muslims” hinges on their ‘denunciation of cow slaughter” is akin to issuing an outright threat. 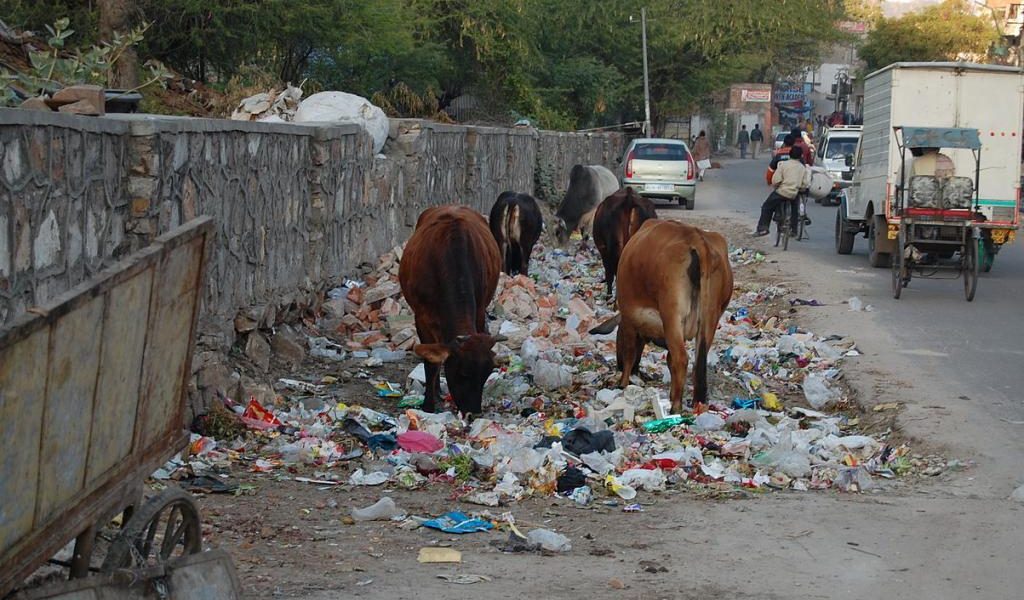 Cows at a garbage dump in Jaipur. Photo: Wikimedia Commons

In a recent article in The Hindu titled ‘Cow and Conciliation’, a serving Muslim Indian Police Service officer, Najmul Hoda, says that “a theological denunciation of cow slaughter is an imperative for peace and self-preservation of Muslims”.

His argument is wrong. It is also highly objectionable on several counts.

To say that the “self-preservation of Muslims” hinges on their “denunciation of cow slaughter” is akin to issuing an outright threat. It means that unless Muslims shun beef  and denounce cow slaughter from a theological perspective in order to propitiate the religious sentiments of Hindus, communal peace will never prevail and they, as a community, shall forever be imperilled.

In other words, Hoda would like Muslims to ‘concede’ that if Hindus worship the cow and do not eat its meat, then from a philosophical and theological perspective, as well as from the vantage point of rule of law and constitutional rights, this belief must transcend all other beliefs and views.

Further, that all Muslims who think Islam permits the consumption of beef must realise this is a fallacy or a product of their ignorance of ‘true Islam’, as defined by the likes of Hoda.

In any case, if they do not oblige, they should realise the physical safety of the entire community shall be in danger.

In a multicultural society, respecting the sentiments of others is laudable but respect cannot come with the threat of mass violence on an entire community. Communal harmony and peace must not be maintained at gunpoint.

Hoda’s threat presumes that all the horrors that Muslims in India are suffering at the hands of Muslim haters are because they eat beef and that there is no other reason.

Do Hindu-Muslim relations hinge only upon beef? Does peace and the preservation of a community in a country supposedly governed by a constitution and rule of law hinge on food preference? Does Hoda mean to tell the nation that the animosity against Muslims, which has been growing exponentially since the past few years, is solely because some of them eat beef? Is it possible for a senior police officer to be out-of-touch with the harsh realities of today’s India?

Hindu-Muslim relations are an extremely complex affair having their roots in many things – including history, culture, religion, relative societal and economic power equations, etc. Finally, there is the role of politics and politicians. Yet, shunning beef has been projected as the single-widow solution to all the woes of Indian Muslims.

Unfortunately, real life is not as simple as imagined by such propagandists of the majoritarian narrative.

Does he mean to say that if those Muslims who do eat beef resolve to stop eating it one fine day, it will be guaranteed that, in view of this magnanimous gesture of theirs, India’s entire 18-20 crore strong community will no longer be tormented by Muslim bashers any more on social media, over TV ads, in markets, on trains, near temples, everywhere?

Will they cease to be derided as ‘traitors’, ‘un-patriotic’ or ‘not Indian enough’ after that? Will they no longer be “recognised by their clothes” thereafter? Will their social exclusion and marginalisation become a thing of the past?

Does he mean to say that thenceforth, there shall never be any communal violence at all? Incidentally, I do not think that anybody has a case that the Delhi riots of February 2020 had anything to do with beef.

Does he mean to say that thenceforth, if a problem like COVID-19 strikes again, it shall not be unjustly blamed on the Muslims, as none other than three high courts were obliged to conclude? All such incidents have been witnessed in recent past and they had nothing to do with beef.

In fact, it can be argued that the kind of threat (or at best, condescending, paternalistic advice) Hoda holds out has an ulterior motive. The sinister design is that, through this, Muslim bashers can absolve themselves of any legal or moral responsibility for violent acts in the future. When violence is perpetrated on the Muslims hereafter, they can wash their hands off it claiming that none of this would have happened if Muslims had denounced the eating of beef.

I do not think there is any need to indulge in a theological debate on whether Islam approves of eating beef or not. As for what the prophet maintained on it, debatable interpretations are given by different scholars. Citing the Hadis Sahih-al-Muslim # 2486 and Sahih-al-Bukhari #3126, Allama Anwar Shah Kashmiri (in Faiz-ul-Bari vol. 3, p. 459) holds that he approved of partaking it. On the other hand, Maulana Abdul Hayy (in Majmua-ul-Fatawa, p. 407) says that it is possible that he himself did not eat it but he gave it to his wives to eat, and that Allah knows best.

Even in Hinduism, different schools of Vedanta, such as Dwaita and Adwaita for example, both cite different hymns from the same Vedas in their support.  Theological matters are always liable to be interpreted in a myriad contrasting ways and debated endlessly. Why stir a hornet’s nest by unnecessarily trying to reinterpret something in a certain way knowing well that there shall never be unanimity on this?

The fundamental question is why and under what authority should someone seek a theological denunciation of beef eating? In fact, this pointless exercise makes the intentions of its advocates suspect.

In July 2017, the Supreme Court suspended the environment ministry’s notification ‘Prevention of Cruelty to Animals (Regulation of Livestock Markets) Rules, 2017’ under the Prevention of Cruelty to Animals Act, which had banned the trade of cattle for slaughter, giving relief to the multi-billion dollar beef and leather industries that employ millions of poor workers.

It would be inherently illogical if we were to continue slaughtering cattle for export, while denying our own poor people the right to sell it and eat it.

India’s communal problems are not merely on account of what some people prefer to eat or not eat. If we are really keen to make India what our parents in 1947 had so fondly wanted it to be then, we must address those complex, unsavoury issues; and resist the concerted, unholy efforts to fan the communal flames.

Such blatantly defeatist and myopic advice, coming from a serving Muslim IPS officer, gives the majoritarian narrative an opportunity to typecast Muslims as ‘good’ and ‘bad’, and then justify persecution of the latter.

N.C. Asthana, a retired IPS officer, has been DGP Kerala and a long-time ADG CRPF and BSF. He is a vegetarian and amongst his 48 books, two are on Hindu philosophy.