Zafar Sureshwala, the Muslim face of the BJP, sees a Congress plot to spread fear but his brother was among those who alerted the police about the markings that were placed soon after posters warning of Paldi becoming another 'Juhapura' appeared. 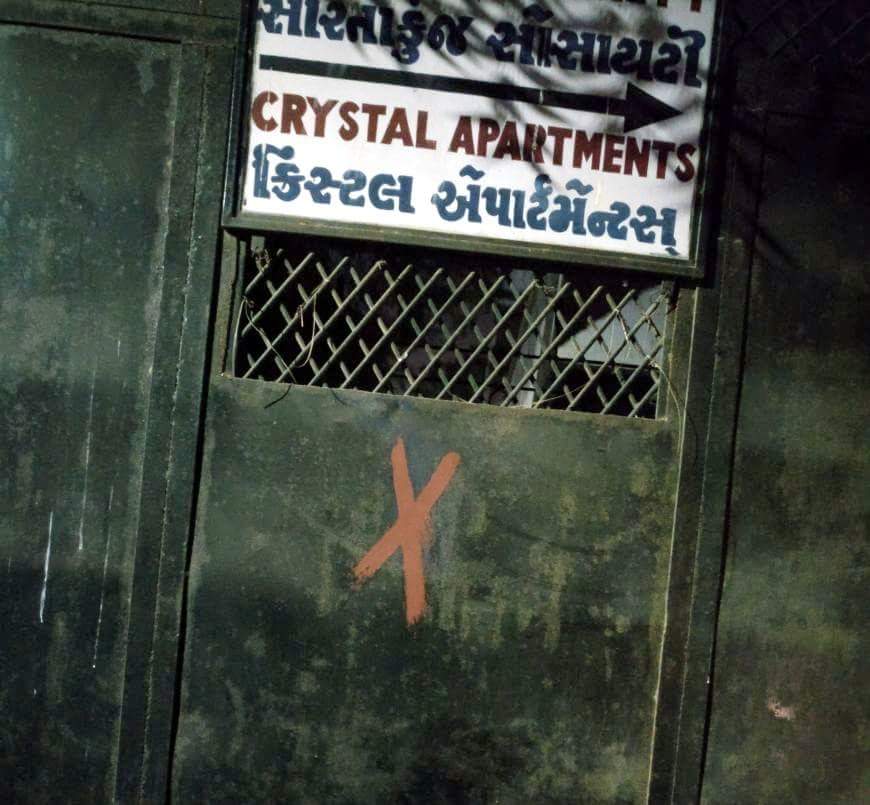 Ahmedabad: An apparent municipal plan to implement a GPS-driven garbage collection system created panic among the Muslim residents of the Paldi area when they found mysterious red crosses on the outer wall of their housing societies earlier this week.

Though 15 years have passed since the 2002 targeted attacks on Muslim neighbourhoods and dwellings in the city, the big red ‘X’ marks led many to imagine the worst. Several residents filed a written complaint to the Election Commission and the police commissioner. It was only then that the Ahmedabad Municipal Corporation (AMC) said that the cross marks were meant to be garbage pickup points and had been painted by its staff.

“We have been using geo-fencing technology for door-to-door garbage collection. The points from where garbage has to be collected are called points of interest or POIs and the latitude-longitude of the point is recorded in our system. This enables us to monitor if the garbage has been picked up through a GPS system. However, as the drivers of the garbage collecting vehicle are not so educated, they were having issues in understanding the exact locations of these POIs through the GPS system. They would deviate from the recorded point and even though the garbage would be collected, it wouldn’t show on our system. For the drivers to understand, the staff of the private contractor who works with Ahmedabad Municipal Corporation in this process, marked the POIs with a red cross,” said Chirag Shah, deputy health officer of the AMC’s west zone.

“Nobody thought it might create panic. The moment we realised this, we painted all the red marks with white paint. We have devised stickers that will have GPS chips so that the drivers can be tracked” Shah added.

“We have 484 garbage pickup points in the Paldi area and about 14 vehicles that take different routes. The JTC company has partnered with AMC in the process of implementing the geo-fencing garbage collecting system. One of the drivers for his better understanding marked about 20 points with a red cross, which was misinterpreted. Nobody did anything out of a wrong intention,” said Nitin Trivedi, an AMC public health supervisor who went with the police on the evening of November 13 to explain to residents of Muslim housing societies that they had no reason to worry.

However, Harshad Solanki, director of solid waste management at the AMC denied any knowledge of such activity. “I would know if the AMC has done any such marking. Usually, the AMC doesn’t mark houses like that,” he told The Wire.

Paldi is mostly inhabited by Jains and Hindus apart from a handful of Muslims. The area falls under the Ellis Bridge constituency which was once represented by BJP leader Haren Pandya, who was murdered in the March 2003. Over the years, Ellis Bridge has remained a BJP bastion.

The red cross marks appeared on about 10 Muslim housing societies in the area, spreading panic. Later, it was found that at least two Hindu societies also had similar markings. The residents of Delight, one of the Muslim societies, wrote a letter to the Election Commission and police commissioner on November 13 urging them to take “immediate action against marking and highlighting of Muslim community building premises in Paldi area”. The letter mentioned that Muslim societies like Aman colony, Nasheman apartment, Tagore flats, Ashiyana apartment etc situated between the National Institute of Design and Shantivan at Narayan Nagar road had identical cross marks in red colour. The letter further stated that “such markings have left the Muslim community in shock and fear as it is done by some unknown element which shows clear purpose of identifying Muslim living area”.

The fact that the red cross marks appeared three days after a poster saying “Don’t let Paldi become Juhapura” added to the sense of panic. Juhapura is a Muslim neighbourhood in Ahmedabad, and also the largest Muslim ghetto in India. The posters that were put up at Mahalaxmi Circle in Paldi, about one kilometre from the Muslim societies that had red cross marks at the outer wall, were removed after about 48 hours.

Delight Flats was one such Muslim residential area that was targeted and attacked by a mob during the riots of 2002. A Delight resident, Dr Yunus Bhavnagari, had opened fire in self-defence, killing one man in the mob. He was arrested and spent three months in prison until his eventual exoneration.

“Some residents noticed the marks on their society’s gate and informed me. Later some more people found similar marks and the information with photos of the marks began to circulate in WhatsApp groups. When everyone approached me, we sat together and decided we should apprise the concerned authorities about the matter before it is misconstrued through social media or WhatsApp,” said Uvesh Sareshwala, a resident of Delight society and one of the complainants.

“Our intention was to not create a communal divide or politicise the matter. We were worried about our safety. We handled the matter maturely, without blaming anybody, and just wanted the concerned authorities to act,” added Sareshwala.

However, Uvesh’s brother, Zafar Sareshwala – a businessman and chancellor of the Hyderabad-based Maulana Azad National Urdu University who is also considered to be close to Prime Minister Narendra Modi and a strong supporter of BJP – claimed on Times Now that the Congress was behind such incidents and was trying to communalise voters before polls.

“He (Zafar Sareshwala) is a public figure and he expressed his opinion. As residents of the area, we had just one concern – that of our security. I told the men from AMC who visited us with the police that they should have informed the residents if they were going to mark the societies. It would have saved unnecessary chaos and fear,” Uvesh Sareshwala told The Wire.

“The Hindus and Muslims of the area never had any issues within themselves. Whatever happened in 2002 was an act of outsiders, not of the local Hindus,” he added.

A.K. Singh, the police commissioner of  Ahmedabad has ordered an enquiry headed by K.L.N. Rao, special commissioner of police. And the red marks on both the Muslim and Hindu housing societies were painted white by AMC staff by the night of November 13.