The Hoshiarpur police are providing security but 10 days after the incidents of intimidation and even violence, they have yet to take action against the vigilantes who tried to enforce a communal boycott. 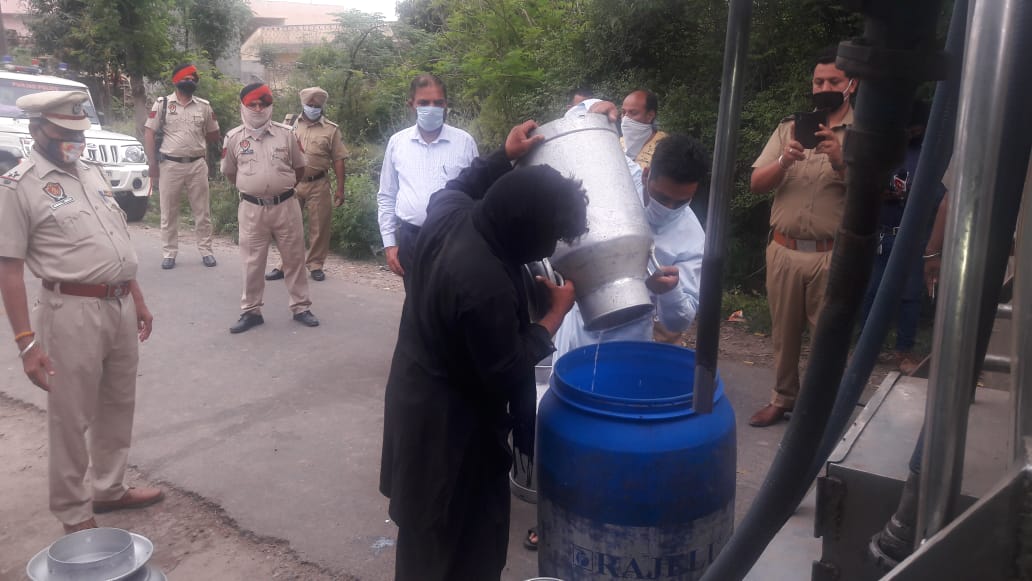 A Muslim Gujjar man supplies his milk to the local cooperative society under police protection near Hajipur, Hoshiarpur district, on the morning of April 14. Photo: Apneet Riyait, Deputy Commissioner

Hajipur (Hoshiarpur): Baaruddin is eight years old. The nail of his index finger is broken because he lay down flat on top of his father to save him from the blows of a lathi on the Hajipur-Talwara Road 10 days back. Their family is among the few Gujjar Muslim milk sellers in the area, and as politicians and a section of the media have communalised the spread of COVID-19, they are among those who have been attacked – both verbally and physically – by people from adjoining villages.

Baaruddin’s mother Jaanu was on the receiving end of both abuses and blows. “Their words were extremely dirty. They hit me on my arms and stomach and tore my shirt. It was more painful because our son was watching all this happen to his parents,” she said.

The assault occurred at the meeting point of the twin villages of Ramgarh and Bhatoli, under the jurisdiction of the Talwara police station.

The Wire interviewed at least three such families who were attacked and faced communal abuse in Talwara and Hajipur towns, and had difficulty selling their milk because of rumours. Most of the attacks took place on April 5 and 6, but the social boycott has not fully gone away.

While a section of the police had been quick to label the Gujjars’ claims “fake news” when they were first reported, the reality is that the situation on the ground is serious enough for district administration to order the police to stage a flag march on the morning of April 15 and invite the Gujjars to sell their milk to the local cooperative society under police protection. 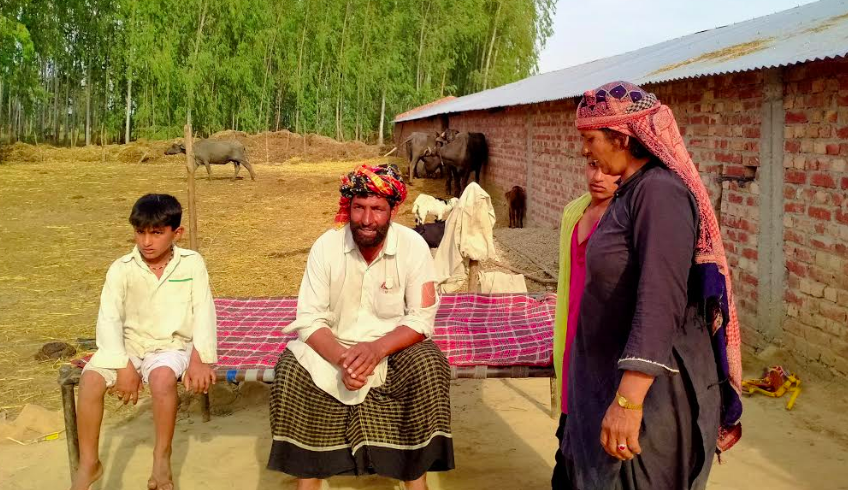 Meanwhile, Baaruddin’s family is still stranded in their mud-house dwelling on the outskirts of Naushera Shimbli village near Hajipur. The plan is to move, along with their cattle, to Himachal Pradesh for the summer.

“We wanted to go to Himachal, where we spend two months every summer. This makes it possible to give our cattle green grass. But now we are neither being allowed to cross over nor allowed to sell our milk,” said Jaanu’s husband, Bali Mohammad.

The shirt that Bali had on when this correspondent met him had been torn in the attack, his eight-year-old son pointed out.

“They said we were infected with the disease. They asked us to leave,” Jaanu said.

A video of two Gujjars pouring their milk into the Beas river near Bela Saryana village is equally telling of the prejudice at play.

“People are not taking our milk. A ban of sorts has been imposed on us after rumours spread that we are spitting into the milk we were selling,” said the man in the video. The video was sent to this correspondent by one Jummaddin, of Naushera Shimbli village, who said Gujjars have little choice but to throw the milk away.

No one booked for intimidation yet

Jaanu and her family were again attacked for the second time on their way back from Talwara.

“We are very poor and illiterate. When police saved us from the second attack near Talwara, that was enough for us,” she said.

Yet, if policemen from the Hajipur police station had been around to save them, the question arises as to why no one has been booked for the attacks yet at Chaudhary Bagh village.

When contacted, Dasuya deputy superintendent of police Anil Bhanot said, “We will surely take action if they [the victims of the assault] come forward with a complaint”.

When told that the victims were illiterate and scared, Bhanot said he would immediately ask the SHO of Talwara police station to visit them “to look into the matter”.

A third case, that of 17-year-old Shah Wali of Naushera Shimbli village, is remarkably similar. Wali was also assaulted at Ramgarh-Bhatoli.

In addition to Jaanu and Shah Wali’s families, locals say a total of seven families were assaulted at Ramgarh-Bhatoli. The Dasuya sub-division deputy superintendent of police assured this correspondent that action would be taken on all of them.

The Wire also traced the family of Farman Ali, who was quoted in this correspondent’s earlier story as amongst those Gujjars who had to throw away their milk. He and his family were among 7-8 such families of Gujjars who were camping on the outskirts of Hajipur without food and fodder for cattle. 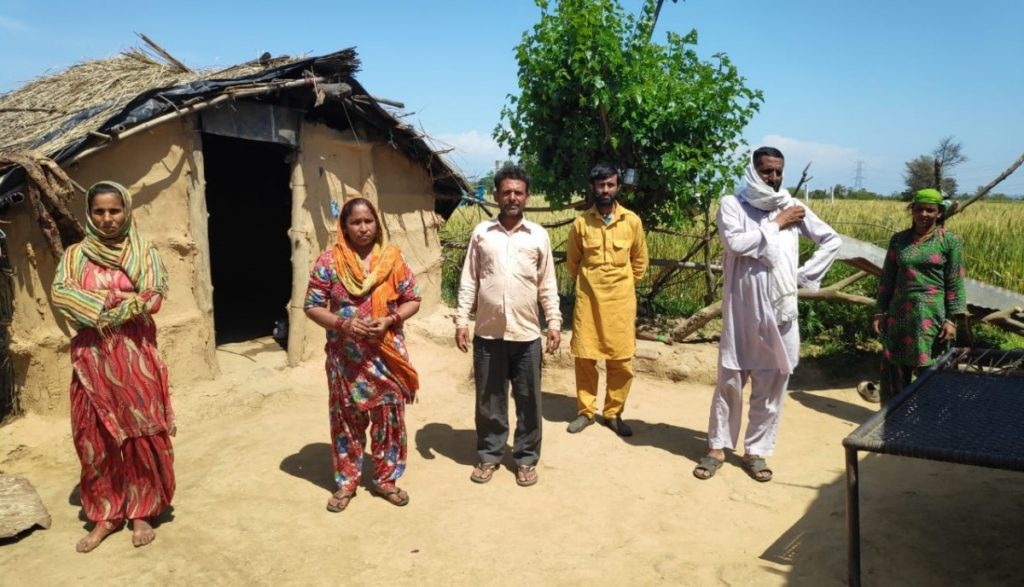 “Our cattle have not had fodder for many days and we are not allowed to move around for it. How will we survive?” Ali asked.

“We still keep hearing that we are sick and we will make others sick,” he said, while the women in his family showed their empty containers of wheat floor.

At another Gujjar settlement, a woman named Shaillu said that she was not allowed to reach out to a doctor in Kulian Luvana village. “They (the villagers) told me that we are suffering from coronavirus and that I can’t enter the village,” she said.

Ailing from a tooth ache, Shaillu was helped by contacts in the village who sent her medicine clandestinely.

Hoshiarpur deputy commissioner Apneet Riyait told The Wire that the SSP has been instructed to take action against any complaint.

“My officers send me pictures and videos whenever they go to the aide of those people,” the DC said.

She said the administration would act on further reports of violence, if there were any. “You must speak to the SSP also, as I have already asked him to act on this entire matter,” the DC said.

SSP Gaurav Garg did not take The Wire‘s calls. The queries sent to him centred around the progress in investigation done, if a case has been registered in the wake of the assault on Gujjar Muslims last week and if he had replied to the DC’s communique.

Similar stories have been reported from Sangrur and Ludhiana districts, said All India Gujjar Mahasabha’s Punjab president Shukardeen Rana. “Gujjar Muslims are facing this problem all over Punjab, and this is a fallout of the misreporting on Delhi’s Nizamuddin congregation by some TV channels,” he said.

Shukardeen said he raised a hue and cry in the Gurma village of Ludhiana district when some men of the village’s Milkfed Cooperative Society resisted the collection of the milk by Muslims.

“We had to argue a lot and my video on our milk not being purchased by the village society went viral,” he said, adding that police and administration have been very helpful.

On April 8, The Wire had reported on the plight of several Gujjar families here who had been prevented from selling milk by local vigilantes and had been forced to shift to the Swan river bed and spend one day without rations before the police came and provided them relief.

In response, the Hoshiarpur Police tweeted the next day that this was “fake news”.

As “proof” of this claim, the official Twitter handle of the Hoshiarpur Police posted a video on April 9 in which one of the Gujjars, Sirajuddin, says he is fine, that they have received rations, and do not face any problems. The police added a curious line along with the video – “Gujjars are good. Don’t spread fake news” – which seemed directed at this correspondent’s story instead of those spreading rumours about them being carriers of the coronavirus.

In the light of the police’s accusations, here is the relevant chronology of events:

On April 7, the Muslim Gujjar group of which Sirajuddin was a part was threatened by local vigilantes and forced to seek refuge in the river bed.

While following this story, this correspondent telephoned the deputy commissioner, Apneet Rayait at 1:28 pm on April 8 to discuss the plight of the Gujjar families on the river bed and again at 2:30 pm to follow up on their urgent need for food and fodder.

The audio recordings of the phone calls are being posted here in the light of the Hoshiarpur Police’s claims about “fake news” to establish that the DC herself had acknowledged the severity of the problem the Gujjar Muslims were facing.

In the first conversation, in fact, Rayait says she had received complaints from some Gujjar representatives, that the administration would not tolerate religious discrimination and that she had asked the police to identify those who had intimidated the Gujjars and file FIRs against them:

In the second conversation, she says the Gujjars have not yet been located but that she would be able to update this correspondent within half an hour, and welcomed this correspondent’s offer to send her their photos and videos:

At 2:38 pm, this correspondent sent the DC the photos and videos he had of the Gujjars in the river bed and their precise location near ‘Terrace Bridge’: 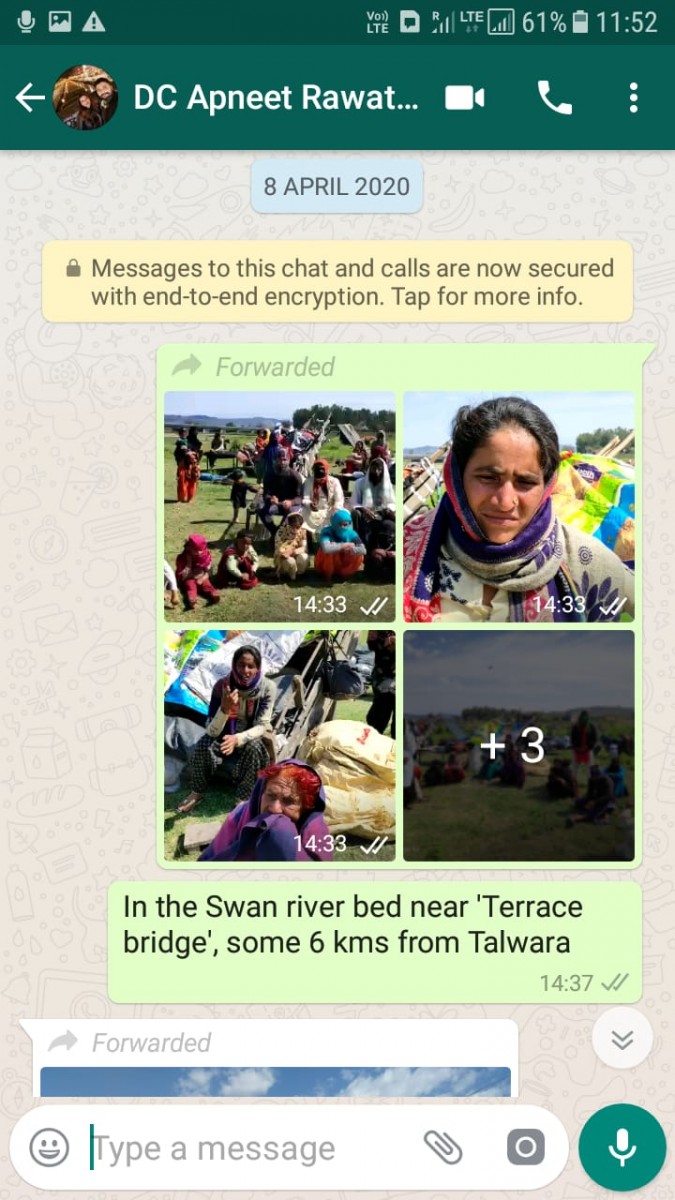 Photos and videos of the Gujjar families in the Swan river bed shared with DC Hoshiarpur, Apneet Rayait.

At 4:31 pm, Rayait messaged back with photographs of the Gujjars holding rations they had received from the administration: 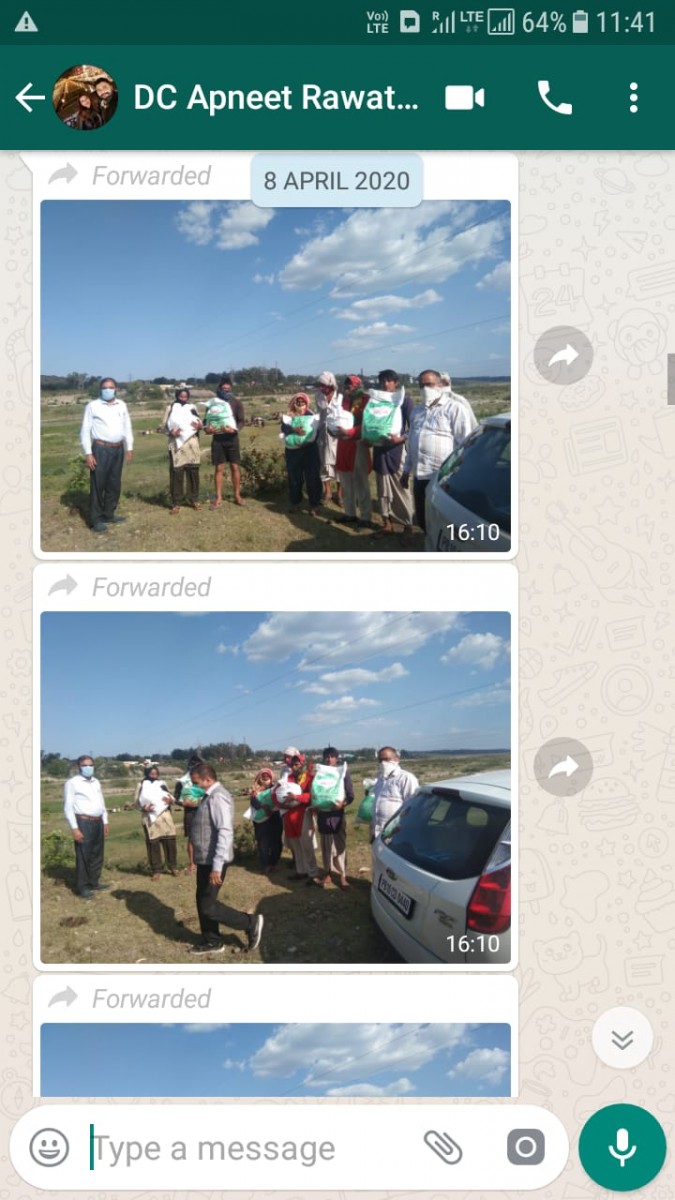 Photos of the Gujjar families in the Swan river bed with rations, shared by DC Hoshiarpur, Apneet Rayait.

The Wire’s story on April 8 duly quoted Rayait saying that rations had been provided to the Gujjars on Wednesday, i.e. April 8.

On April 13, this correspondent visited Sirajuddin and his family on the river bed. Speaking on camera, he recounted the intimidation they had encountered selling milk to local villagers and how they ended up in the khad, or river bed:

Sirajuddin said some of the problems they faced have now been resolved but not all of them. He said they are able to supply their milk to local cooperatives and some villagers were now also buying.