On August 29, a mob attacked the Ahmad family and vandalised a gym belonging to the younger brother. The family alleges that their neighbours, against whom they are fighting a property case, were among the attackers.

A screengrab from a video of the attack on August 29. Photo: Special arrangement

New Delhi: A Muslim family in Uttarakhand’s Jhabrera town have alleged communally targeted violence over a dispute with their neighbours.

On the evening of August 29, a mob allegedly attacked Parvez Ahmad’s family, causing injuries to his family members and others. They also vandalised a gym belonging to Ahmad’s younger brother. Ahmad’s family claims the mob consisted of their neighbours and several unknown persons with links to the Rashtriya Swayamsevak Sangh (RSS).

Reportedly, the conflict between Ahmad’s family and his neighbours started with an ongoing property dispute, the case of which is being heard by the courts.

An FIR has been registered by the family. However, they claim no arrests have been made so far.

The FIR, accessed by The Wire, was registered on August 29 and names six persons as well as 10-14 unknown persons. Those accused of the violence include – Puroshottam Saini, Arun Dheeman, Vinod Dheeman, Rajpal, Anshul Saini and Paras.

The accused have been booked under Sections 153-A, (enmity between different groups) 147 (rioting) 148 (possession of a deadly weapon)149, (unlawful assembly) 323 (voluntarily causing hurt) 504, (breach of peace)  506 (criminal intimidation) and 427 (mischief causing damage) of the Indian Penal Code (IPC).

The FIR states that a mob of 15-20 persons, which include those mentioned above, attacked the gym with sticks and weapons. It adds that communal slurs were hurled against the family and an attempt was made to communalise the issue and disrupt peace in the area. 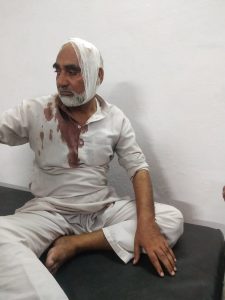 Speaking to The Wire, Parvez Ahmad explained what transpired. “On August 29 at around 6.30 pm, we were attacked. This attack was planned as they incited their people against us. My younger brother has a gym, which was attacked by a mob of people wearing saffron cloths. While some had their faces covered, we could recognise some members of the mob from their clothes,” he said.

“The gym was ransacked and there was firing also. After attacking the gym, they crossed the road and came over to our side. They had sticks with them, and tried to stop my brother from making a video. When Alisher, my father, tried to stop the mob, he was attacked with sticks. Cuss words were hurled at women in the house who were also targeted. As crowds gathered, the accused left the spot,” he added.

Alisher has suffered a serious head injury and is currently admitted at Roorkee’s Government Hospital.

Ahmad stated that the family no longer feels safe living in the area since no arrests have been made and their previous complaints have not led to any substantial action. “We feel unsafe, none of those who were participants in the violence have been arrested yet. My father has lost some of his hearing and is suffering because of the head injury.”

The Dheemans are reportedly neighbours of the family and have been fighting a legal case with Ahmad’s family over a dispute pertaining to property. Ahmed states that the Dheemans had put up a gate blocking an entry point to their house, which started the conflict.

Previously, another FIR was filed against Sonu and Arun Dheeman on August 19 under Sections 452, (trespassing) 354 (assault and use of criminal force against a woman) 504, (breach of peace) and section 506 (criminal intimidation).

Ahmad had alleged in his complaint that on the night of August 18, he had gone to the mosque to offer prayers at night. While the women of the family were standing outside their home, four-five people gathered and threatened and abused them. They were threatened that they would be killed off, reads the complaint.

The FIR accessed by The Wire goes on to state that if anything were to happen to the family, it would be the fault of the men named in the complaint.

Ahmad informed The Wire that they were threatened by the Dheemans earlier. “Prior to this, they tried to threaten us to take back the cases. On August 19th, they misbehaved with our women and threatened us. They said, ‘You are Muslims, you have no right to live here’. In a way, they tortured us. We had also filed an FIR in the case, urging the police to take action against them. However, nothing happened.”

Speaking to The Wire, advocate Salman, who is representing Ahmad, said, “Two FIRs were filed by our side, however the police has clubbed it into one. This included an instance of a complaint regarding the mistreatment of women. However, no action has been taken.”

The Wire reached out to Jhabrera Police station. Sub Inspector of Police Sanjeev Thapliyal, who registered the FIRs pertaining to the case, said, “We have registered the FIR and are investigating the issue. The accused are currently on the run.”

When asked about the dispute, the officer mentioned that it is an old dispute which has led to the conflict.

Local media outlets reported that the violence was a result of a conflict over payment of cash by two different shop owners belonging to two communities. However, this version could not be verified either by Ahmad’s family or the police.