No one should conclude from this one statement that the RSS is about to change its spots. But, for once, the RSS chief appears to have sized up the befuddlement at the heart of the Modi establishment and thought it imperative to send out a signal. 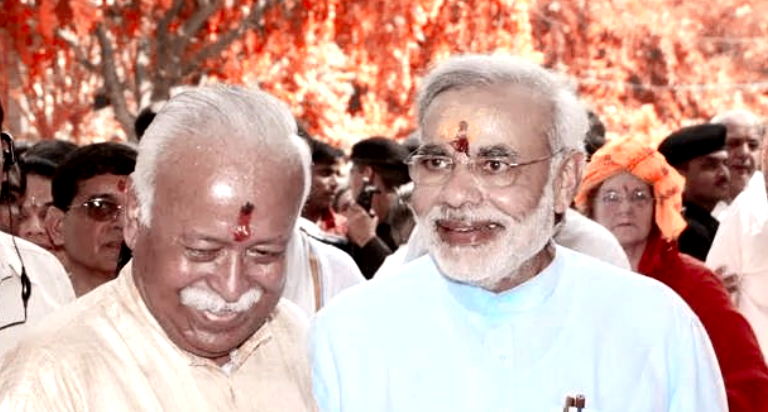 No one – not even the most empowered intriguers stationed in Nagpur – will be able to attest with any degree of confidence as to whether Rashtriya Swayamsevak Sangh chief Mohan Bhagwat was sincere when he spoke up the other day against radical Hindu groups looking for a “shivling under every mosque.”

Given the fact that inspired factotums in the media keep informing us about how closely and how comprehensively the prime minister spends every single minute of his time micro-managing the nation’s affairs, his silence on the mandir-masjid controversy in his very own constituency was read by various stake-holders as a kind of endorsement of the mobs gathering outside various mosques across the land.

Yet, no one can be faulted for wanting to assume that a prime minister who has taken an oath to uphold the constitution would feel himself bound by the laws of the land; in particular, the Places of Worship Act, 1991.

The prime minister’s silence was read as a signal. Of course, the English-speaking anchors and columnists, always over-awed by the Hindu mobs and their furies and passions, were falling over one another in arguing that social peace and tranquility can be secured only on the activist Hindu’s terms and on their reading of history and not according to any secular script or constitutional axioms. This habitual poison-darting was, of course, predictable; what was not anticipated was that even some lordships in the higher judiciary would have allowed themselves to be confused by the prime minister’s tactical silence on the whole Kashi-Mathura caboodle.

Given the current context of inflamed passions and stoked emotions, the RSS chief’s formulation can only be considered a strategic clarification. It is possible that the three designated Chanakyas – the magnificently “connected” Prime Minister, his very shrewd home minister, and his equally astute national security adviser – were all uncertain about Nagpur’s predilection in the matter. Someone like the chief minister of Uttar Pradesh obviously believed that he would endear himself to Nagpur’s medievalist establishment when he openly suggested that Kashi and Mathura could be the new sites of resurrection of Hindu glory.

It could still be a case of “good cop, bad cop” routine but, for once, the RSS chief appears to have sized up the befuddlement at the heart of the Modi establishment and thought it imperative to send out a signal before mobs overwhelm decision-making atop Raisina Hill.

Because the RSS is probably the only organisation that is well-versed in the idea of organised violence and is familiar with the dynamics of the street, the Nagpur commissars must have been alarmed at the how the country was being goaded into an unscripted anarchy. It is truly frightening for any one concerned with the stability and security of the nation to realise how easy it has been for a handful of low-level litigants and low-level judicial personnel to create social volatility and religious frenzy; not to speak of the digital-arsonists masquerading as anchors, spokespersons, and experts thoughtlessly fanning the flames of religious animosity.

An establishment that takes an exaggerated pride in smoking out conspiracies here and there and everywhere was clueless when radical Hindus began manipulating the judicial process in Varanasi towards an unholy end; these very “intelligent” men should have foreseen the mischief that was afoot in the matter of the Gyanvapi mosque.

The BJP leadership, at least, should have enough organisational memory to remember that a mob, once animated, acquires a momentum of its own. As it is, a number of assorted sadhus and sants see an opportunity to fish in the troubled waters at the Gyanvapi Mosque hauz. It would not be the first time that a political leadership will miscalculate its ability to control and command the religious entrepreneurs. The managers of our national security state cannot be unaware that the Yogi administration has already instigated an ecosystem in which it is normal and cost-free for anyone to insult the Muslim community. Perfect setting for a perfect storm.

It is ironic that an RSS chief should be invoking the Constitution of India. Of course, no one should be naïve enough to rush to conclude from Bhagwat’s one statement that the RSS is about to change its spots. It is too deeply entrenched in its concocted theology and manufactured history to fall in line with the letter and spirit of Ambedkar’s constitution.

All that can be inferred is that unlike the besotted bhakts, the Nagpur commissars have not been taken in by the ruling cabal’s tall talk and even taller claims of achievement from the PMO. Equally, what can be presumed is that Mohan Bhagwat seems to have seen more clearly how precariously India is placed geopolitically as well as how vulnerable the nation’s economy has become, than the Modi-Shah-Doval-Jaishankar quad.

Nobody knows better than the RSS top brass that India is about to cross the global community’s red lines. The US State Department’s latest report on rising religious intolerance in India carries with it a clear warning. All said and done, the RSS chief seems to have understood, at least, that this is not the time to open yet another front. Certainly not the time to light up fires of a civil war.

For all the obsequious tributes that were recently paid by the new durbaris to Modi’s s eight years of national stewardship, no one seems to have reminded him that the basic weight and measures of statecraft in India remain unchanged.

Any leader who appears to be oblivious to the fundamental imperative to govern by consensus finds himself or herself brushed aside by history. Prime Minister Narendra Modi needs to be grateful to Mohan Bhagwat for pulling his chestnuts out of the fire for him.