A Song of Love For a Time Filled With Hatred 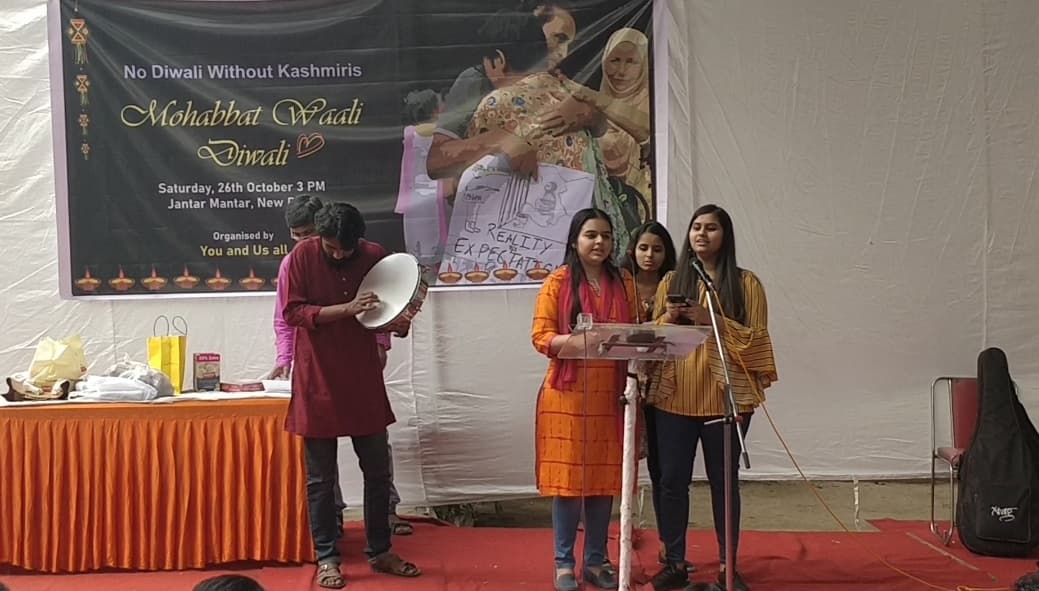 Khilkhil and her friends sing the song at Jantar Mantar. Photo: The Wire

New Delhi: School going Khilkhil Bhashanandini and her friends were surprised when they first heard the news that a headmaster had been suspended for allegedly making his students recite the poem, Lab pe aati hai dua.

“We were taken aback when we heard that a school headmaster has been suspended because of this poem. This was a poem we grew up listening to and reciting in our schools and elsewhere,” Khilkhil told The Wire, adding that “there is nothing objectionable in this poem. Instead, it emphasises peace and unity”.

She believes a poem like this is a symbol of light in the time of hate. Khilkhil, who is a Class 12 student of a private school of the National Capital Region therefore decided to sing this song during a Diwali celebration programme at Jantar Mantar on Saturday. Two of her friends, Sakhi and Sehar, studying in Class 10 and Class 7 respectively, sang along.

According to a report on Indian Express, the district administration of Uttar Pradesh’s Pilibhit suspended Furqan Ali, the headmaster of a government primary school in Bisalpur area earlier this month, following a complaint by local Vishwa Hindi Parishad (VHP) workers, alleging that the teacher made students recite a ‘religious prayer’ (Lab pe aati hai dua) during the morning assembly. The poem was written by Mohammed Iqbal, who also wrote the often-sung Saare jahan se achha, Hindustan hamara.

Protesting against the suspension of their headmaster, the students of the school walked out from their classes. Later, Uttar Pradesh basic education minister, Satish Chandra Dwivedi, told the newspaper that the suspension should not have taken place without the collection of all the facts. Dwivedi also said Ali’s suspension would be revoked soon.

When Khilkhil came to know that her mother will be attending the Jantar Mantar programme, she corralled and friends and decided to sing the very song that the poem gave birth to. “When everything is being seen either through the lens of whether one is ‘pro-Modi’ or ‘anti-national’, singing songs like these becomes very important because they symbolise unity and love,” she said from the sidelines of the event.

“This is important for creating unity as well as awareness in the society,” she added. 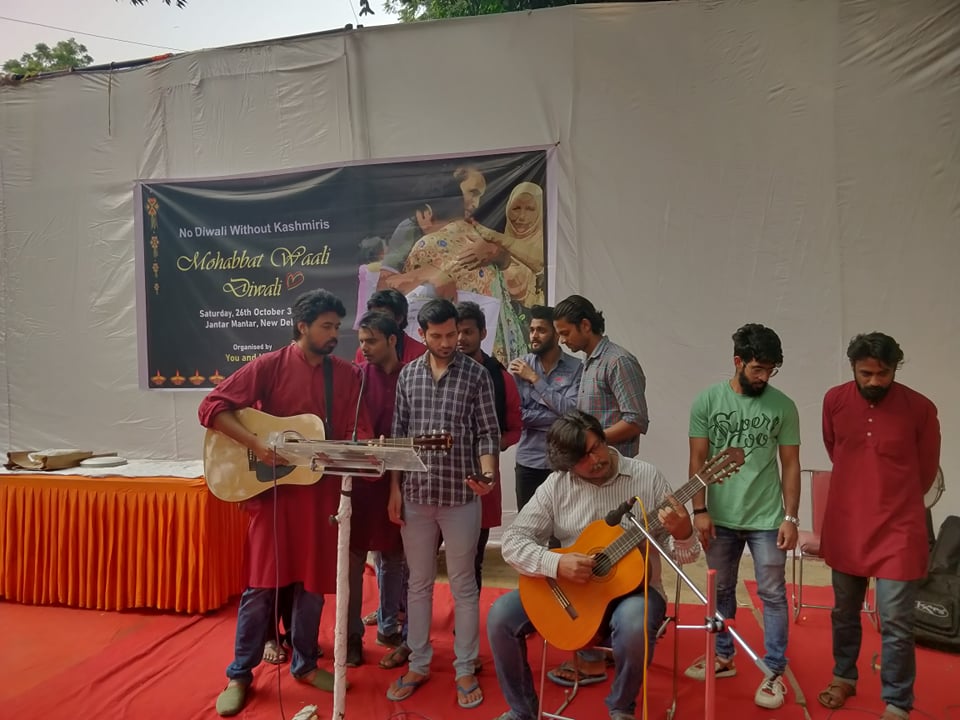 Saturday afternoon, more than a hundred people belonging to various religious communities and professions, gathered at Delhi’s Jantar Mantar to celebrate Mohabbat wali Diwali (‘Diwali of Love’). This was a continuation of Eid celebrations organised at the same venue in August. The idea behind both the programmes was the celebration of these festivals together and the extension of solidarity to the people of Kashmir, who have been under siege since Article 370 was read down. As they had for Eid celebrations, Kashmiri men and women also participated in Saturday’s events, though in far fewer numbers than last time.

“I am thankful to the organisers for this. Initiatives like these give us hope that insaniyat abhi bhi zinda hai (‘humanity is still alive’). There are people who still care about us,” said Areej Safvi, a Kashmiri student while speaking at the event.

Another Kashmiri, while adding that events like these affirmed their belief that there was a difference between the government and the ordinary people of India, said, “I can’t go back home as I fear that if I go back, I will be detained under the draconian PSA.”

Several Kashmiri people who spoke at the event said that all claims of normalcy in Kashmir were a farce.

Khilkhil was not the only one who sang this particular song. In fact, the event began with this very song sung by the Sangwari theatre group, led by Kapil Sharma.

Mohabbat wali #Diwali has just begun at #JantarMantar with the singing of #LabPeAatiHaiDua #Video pic.twitter.com/jOVThBKbrW

As a mark of how deeply the song pervades Indian culture, unlike Khilkhil and her friends, Kapil was not even aware that this poem had been written by Mohammad Iqbal. “Not that I had not heard of the poem but I wasn’t aware that it was written by Iqbal,” he told The Wire.

“I remember hearing this poem at least twice before. The first time I had heard ‘Lab pe aati hai dua’ was at a church many years ago and the second time was here at Jantar Mantar, but it was sung by students of a missionary school and hence I had assumed it to be a hymn.”

News of the headmaster’s suspension, however, stirred Kapil who instantly decided to include this poem in his theatre activities. When his group received an invitation to perform at the event, he told the organisers that their first performance would begin with a rendering of  Lab pe aati hai dua. For a few months at least, the group has decided to start with this poem wherever and whenever they perform.“We will make sure that this goes on to become a song of resistance,” he added.

One is reminded of a poem titled ‘Dharm hai’ by noted Hindi poet and lyricist, Gopaldas Neeraj.

The concluding stanza of this poem reads:

(‘When it is a crime to mutter and sing songs,
then it becomes our religious duty to do so’).

Perhaps this is what Khilkhil, her friends, and the members of Sangwari Theatre group are trying to do in their own way.