The trend, which clearly falls under the category of promoting enmity and hatred against a community, violates Indian law. The individuals using the hashtag advocated a range of discriminatory actions against Muslims.

These ranged from boycotting the buying of goods and services

Boycott and stop buying any goods and services from these converted ????

to advocating a ban on places of religious teaching:

मदरेसों के बंद कमरों मैं ऐसी ही नफ़रत पनपती है। So much of hatred from so early in life!!! By the time he will reach to adulthood, he will be an exemplary bigot spreading filth of hatred.
There should be nationwide ban of Madrasas. #मुस्लिमो_का_संपूर्ण_बहिष्कार #KamleshTiwari pic.twitter.com/VXgql4iNzi

Regrettably, the fact of bigoted hashtags reaching a nationwide Twitter trend is not an unusual occurrence – on October 18, the hashtags ‘#ProphetisGay’ and the translation, ‘#पै_GAY_म्बर’ trended, managing to be both homophobic and Islamophobic in one fell swoop, while on October the 19, the hashtag ‘#BoycottAllah’ was trending, with about 20,000 tweets.

I cancelled my Zomato order because the delivery boy was a Mulla. Every time starting from today #BycottAllah. Retweet if you agree.

However, Sunday’s trend clearly advocates active discrimination against a group of people on the basis of religion and falls under the category of promoting enmity and hatred against a community – something that is illegal under Indian law, with section 153A of the IPC stating that:

(1) Whoever—
(a) by words, either spoken or written, or by signs or by visible representations or otherwise, promotes or attempts to promote, on grounds of religion, race, place of birth, residence, language, caste or community or any other ground whatsoever, disharmony or feelings of enmity, hatred or ill-will between different religious, racial, language or regional groups or castes or communities… shall be punished with imprisonment which may extend to three years, or with fine, or with both.”

Given section 153A, the people using this hashtag can be held accountable for their speech if the authorities choose to take cognizance of it – something that the police is generally keen to do on matters concerning ostensible sedition, ‘anti-national’ behaviour and so forth.

However, till the time of publication, The Wire was not aware of any police department or ministry objecting to the promotion of religious enmity on Twitter and taking action, either against the individual handles or even Twitter, as an intermediary under the Information Technology Act. A recent report found the Indian government’s demands for takedowns from Twitter had propelled the country to fourth on the list of most censorious states.

It is possible the police is reluctant to act against the individuals currently promoting this hashtag with the intent of malice against Muslims since many of them are followed by prominent politicians – including Prime Minister Narendra Modi and various cabinet ministers.

The handle ‘@GovindHindu’ for example uses the hashtag to show an inflammatory picture. He is currently followed by four members of the BJP – the Prime Minister included. 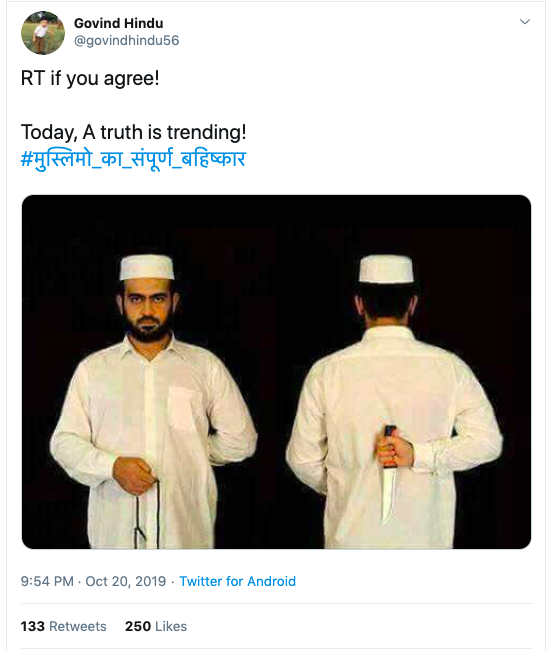 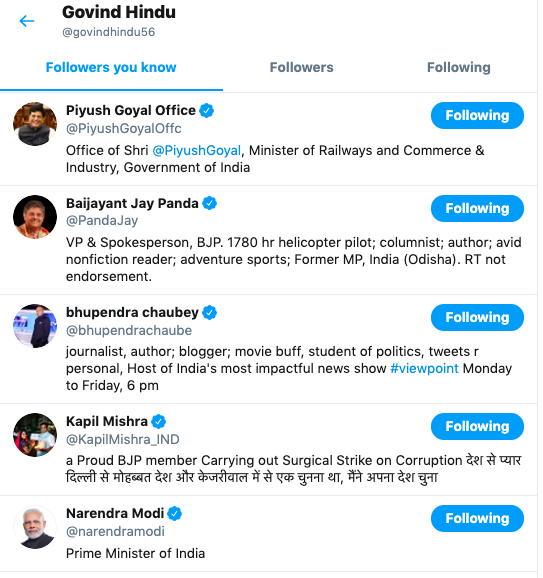 The handle ‘ExSecular’ put out a tweet in a similar vein, though without the hashtag, using a photoshopped image of actor Swara Bhasker to imply that she was calling for the hanging of the people accused of Kamalesh Tiwari’s murder.

She is also followed by Modi, along with Kapil Mishra and the office of commerce and industry minister Piyush Goyal.

While these two accounts were followed by a range of ministers, the Office of Piyush Goyal happens to have been following a significant amount more, including handles below. This is, however, not an unusual occurrence either – the ‘Office of Piyush Goyal’ Twitter handle was in hot water before for following inappropriate accounts, most recently the instigator of the Zomato fiasco.

We can’t live with terrorists, as simple as that. Let us live peacefully, we have given you 2 countries. Leave Hindus alone.#मुस्लिमो_का_संपूर्ण_बहिष्कार

The same video was also circulated by the journalist Abhijit Majumder (who is a verified account on Twitter), in a sardonic thread about how Muslim children are being radicalized.

Of all the Islamist murders, the murder of childhood is perhaps the most brutal and tragic. A short thread of child #jihad videos, starting with the most recent one.#MuhammadForAllpic.twitter.com/9wxKJ2yl9F

However, he sarcastically used the hashtag #MuhammadForAll – which had come up in response to the hate-filled hashtag that had filled the evening and which began an hour after the original hashtag emerged.

In a positive turn of events, at the time of writing, the hashtag celebrating the religion had 42,000 tweets – over 14,000 times more than the hate-filled one vilifying it.