While finding Kodnani guilty, a designated special court held in 2012 that she was one of the "principal conspirators" in the Naroda Patiya violence. 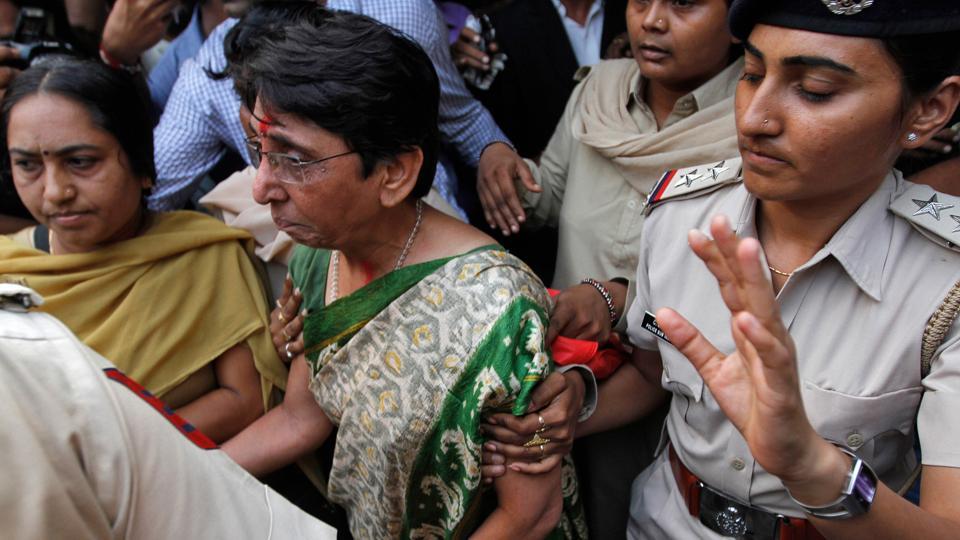 New Delhi: The Gujarat high court on Friday acquitted former BJP minister Maya Kodnani in the Naroda Patiya massacre case. She had earlier been found guilty of conspiracy by a trial court in the massacre in which 97 Muslims were killed during the Gujarat riots.

Kodnani’s assistant Kirpal Singh Chabda was also acquitted. He had also been convicted by a trial court. The court, however, found Babu Bajrangi, a Bajrang Dal leader, guilty, but reduced his sentence from life to 21 years.

According to the Indian Express, the high court found that there was no criminal conspiracy in the riots, and that the 11 witnesses who testified against Kodnani were “unreliable”. The witnesses had said that they had seen her exiting a car at the site of the violence, surrounded by a mob.

Ninety-seven Muslims died in the Naroda Patiya massacre of February 28, 2002.

The court was hearing 11 appeal petitions moved by the convicts, the Supreme Court-appointed Special Investigation Team (SIT) and the families of the victims of the riots, Indian Express reported.

The division bench comprising Justices Harsha Devani and A.S. Supehia had reserved its order in the case in August last year.

An SIT had earlier found that at around 9:30 am on the day of the massacre, February 28, 2002, “Dr Maya Kodnani, the MLA of the said area, after completing the mourn meeting in the Vidhan Sabha came near Noorani Masjid and as per the evidence on record she made some speech and said “Kill Muslims, destroy the property of Muslims.”

While finding Kodnani guilty, a designated special court held in 2012 that she was one of the “principal conspirators” in the Naroda Patiya violence. “Accused 37 (Kodnani) has been proved to be the kingpin of the entire communal riot and one of the principal conspirators who has actively instigated the rioters and has abetted them to form unlawful assembly to execute the conspiracy hatched under her leadership with other co-conspirators,” the judgment said.

In a separate case, Kodnani has also been accused in the Naroda Gram massacre that saw the death of 11 people. In September, Amit Shah, president of the BJP, deposed before the court providing her an alibi.

What is the Naroda Patya massacre?

On February 28, 2002, a day after the burning of a train in Godhra in which 59 people were killed, a mob of several thousand attacked the Muslim dominated locality of Naroda Patya in Ahmedabad. The mob armed with swords murdered 97 people. According to a report on the Gujarat riots, a 30-year-old pregnant woman’s belly was cut open, the foetus was pulled out from inside, and hacked, after which the woman was killed.

Kodnani was accused of criminal conspiracy, murder, rioting, arson, attempt to murder and unlawful activities. She was also charged with ‘leading the mob’, ‘giving hate speeches’ and ‘instigating the mob’ to avenge the killing of the karsevaks who died in the Godhra train burning.

Kodnani, who at the time of the incident was a BJP MLA, was promoted by then then chief minister of Gujarat in 2007 and became the minister for women and child development. She resigned in 2009.

In 2012, a fast track court in Ahmedabad, convicted Kodnani, Bajrangi and 22 others in relation to the Naroda Patya massacre. Kodnani was sentence to 28 years in prison, Bajrangi to life in prison, and the others were sentenced to 24 years in prison.

The judge, Jyotsana Yagnik, noted that Kodnani was the ‘kingpin of entire riots in the Naroda-Patiya’ area. “She led the mob and incited them to violence. She abetted and supported the violent mob,” Yagnik noted in the judgement.

The judge also observed, “As a representative of the people, Dr Kodnani was expected to serve the people and try to stop the riots. Instead, she has been found to be involved in plotting and planning the conspiracy along with Babu Bajrangi to attack the Muslims in Naroda-Patiya.”