Shamsher Ali and Sons: Peeling the Layers of Struggle that Define Lockdown for One Family

A host of pre-existing vulnerabilities and realities determine the depth of the crisis one faces. For this family in Uttar Pradesh's sugarcane belt, the realities exist in five layers. 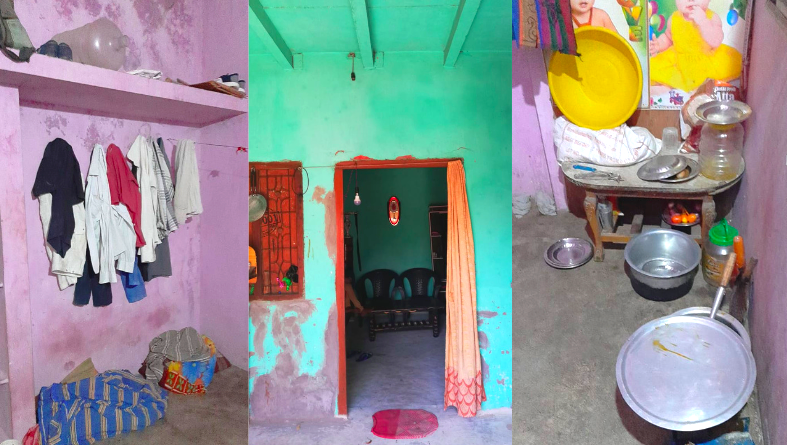 As we go through phase two of the lockdown due to COVID-19, the sufferings of a large number of masses living under precarious conditions multiplies many folds.

The pandemic and the subsequent lockdown has exposed our society to a difficult present and an uncertain future. But like any crisis, it has also split open the existing fissures in our society. So, while the virus potentially can find a host in any one of us, it goes without saying that the crisis does not affect us all in the same manner.

A host of pre-existing vulnerabilities and realities determine the depth of the crisis one faces. Here we will engage in an exercise of peeling these layers for just one Muslim family from Uttar Pradesh – that of Shamsher Ali and his sons Afroz, Jamal and Amjad.

The sugarcane belt of western Uttar Pradesh is largely dominated by landed peasantry – Gujjar, Jat, Tyagi and Rajput – both Hindus and Muslims.

Shamsher, however, comes from a caste that is largely landless. Hence, he, like others in his basti are either engaged in agricultural labour, or are part of the millions on the move, much like who Jan Breman calls the “hunters and gatherers of jobs”. One of Shamsher’s sons. Photo: By special arrangement

His eldest son Afroz is 28 years old and in his nearly 12 years of work life, he has already traversed across Maharashtra, Telangana, Andhra Pradesh, Rajasthan, Gujarat, and Madhya Pradesh. He has largely been a ferrywala (street vendor) selling sarees and salwars on foot in the villages and small towns.

Also read: Interview | ‘At the Stroke of Midnight, Migrant Workers Became Aliens in a Double Sense’

He is currently at Wardha and earns, on an average, Rs 500-600 rupees per day and shares a room with five others, paying Rs 500 rupees per head. Having sent home about Rs 25,000 in the last four months, he hardly has any cash left to sustain himself now that he is suddenly faced with a lockdown. With no support coming from the government yet, he has nearly exhausted even what he had borrowed.

Though the thekedar had promised to send money, he is not picking up calls now and the landlord has said that they can skip the rent, but would have to pay the electricity bill.

By the time we spoke to Afroz, the lockdown had already been extended. He said that even if the lockdown ended in another two weeks, hawkers like him would not have any income for months. The consumers they target are themselves lower-middle class, if not poor households.

With no income for weeks, they would be in no position to spend on clothes. 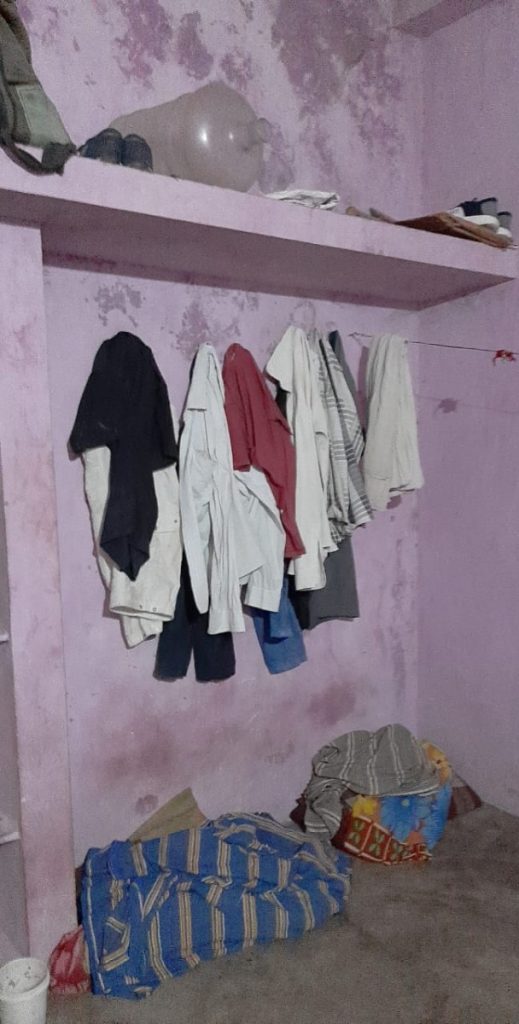 Clothes hand on the walls of Shamsher Ali’s house. Photo: By special arrangement

The coronavirus lockdown came too close on the heels of the worst communal violence that the national capital witnessed in decades. It left at least 53 people dead, thousands displaced and affected the livelihoods of many, including that of Shamsher’s elder son, Jamal.

Jamal also started working as a ferrywala like his brother, at a tender age. But he wanted to venture into something a bit more stable. It’s been four years since he started as an apprentice under an ustaad here in Delhi near Mustafabad.

For about two years or more the arrangement entailed an erratic payment of Rs 1,500-2,000 every two or three months while he stayed with the ustaad at his house. After his marriage, the amount became Rs 4,000 a month. He was just planning a leap to open a mechanic’s garage of his own when the violence broke out in February this year.

Right when the violence started, he somehow made his way back to his village. From his ustaad he heard that while several shops owned by the Muslims were set on fire in the vicinity, their garage was spared as a Hindu acquaintance had intervened.

Just when Jamal was contemplating his return, the lockdown began. So, he has had no work since February, nor payment. In debt already, he said that by the end of this, he would have no option but to postpone his dream to have a garage of his own.

Reality #4: Exposure to hate that is viral

The nature of their work – as street vendors – exposes them to a range of threats and vulnerabilities.

“Earlier people used to feed us while we went for ferri,” said Afroz, “but now we don’t even ask for water”.

In Burhanpur (MP), about a year and a half ago, he recalled how he was accosted while working on the streets and was threatened for having a Muslim name. Thankfully, a Hindu woman intervened and asked him to run away.

On another occasion, a woman who was buying clothes from him asked him to leave the moment she came to know his name. “Leave before my husband comes home,” she said. Months ago in Nagpur, he was charged Rs 500 for a Rs 20 auto-ride and when he protested, the driver said “This is not an area belonging to you people”.

The viral videos of lynching, he said, has led to deep-seated fear. Shamsher with one of his sons. Photo: By special arrangement

The lockdown has led to a sudden increase in the reserve pool of labourers in the countryside, desperately looking for work, any work. This has drastically depressed the already low wages in the villages and small town agrarian economy.

Jamal and his brother are both looking for work in their village. Under the lockdown, options are few. One among them is to go to work in Gujjar fields for the Rabi harvest. But they found no work as there are too many hands and too little pay. Their neighbours who were already working in the fields were in fact asked to leave as the owner had got cheaper labour.

Also read: Amidst the Lockdown, a Man Grieves for His Dead Wife From 1,400 Km Away

This is an aspect of exploitation that in fact is defined more by land, power and caste than by religion per se. Gujjar landowners – Hindus and Muslims alike – are making use of cheaper hands.

As the family ran out of cash and the grain received under the PDS depleted, his youngest son Ramzan, who had just finished his senior secondary education, had to go to a nearby brick kiln owned by a Muslim Gujjar, where after a lot of pleading he managed to get some work for 3-4 days.

Since it is hard labour, he and his brother Jamal are working in shifts for a single wage of Rs 300 per day which, before lockdown, used to be Rs 450. It remains to be seen if Ramzan would have to drop out from education by the end of this crisis. The refugee colony where Shamsher lives.

Finally, the very first and glaring reality. Apart from Afroz who is stranded in Wardha, the entire family now is housed in a congested basti in Kairana. The basti was set up to house those displaced in the Muzaffarnagar violence in 2013.

Most of those inhabiting this basti are poor, uprooted and largely belongs to the lower strata, i.e., Teli, Darzi, Dhobi, Naai, Ansari and Sheikh–Sarvari, in the Muslim community. Most of them work in the informal sector – as agricultural labourers, construction workers, mechanics, vendors, pillow-makers, and so on. A large proportion are migrants like Amjad, Jamil and Afroz.

“We lived in that village for generations,” said Shamsher, the father. “I spent my childhood there. But no one stopped the looting. No one even asked us to stay back”.

His wife even had a small sewing enterprise in the village. He had put his life’s savings to build a house of his own in the village just four years before the violence. And in one stroke, they were uprooted from a 900 square feet house to two 50 square feet kamras in a shelter. Like many others in the 2013 violence hit villages, he had no option but to undertake a distress sale at less than half the price.

So, whatever follows in their present, can never be fully fathomed without due acknowledgment of this past reality of displacement, betrayal and impoverishment.

The socio-economic trajectory of a community, the history of communal prejudice and the political climate, all combine to make a crisis, like the pandemic, a cumulative tragedy. They also inform the contours of the crisis itself.

We see that in the communalisation of the pandemic itself by viciously building upon the Nizamuddin Markaz.

In a nearby village, we were told, Muslim men were asked by Hindu landowners to first get the COVID-19 test done before working on their fields. Amidst reports of lynchings, the countryside seems to be rife with rumours in the wake of the communalisation of the coronavirus spread, so much so that Amjad had stayed up for three consecutive nights keeping vigil, apprehending attacks.

The family’s fate also demonstrates as to how communalism further pushes a minority to the margins of an economy affecting both their livelihood and social mobility.

The jolts of Muzaffarnagar, lynching, CAA, NRC, the northeast Delhi riots and the hate now being brewed in the name of “corona jihad” while we are locked down have been repeated and relentless.