"This is a Hindu colony, we don't need Muslims here," Bunty Upadhyay is learned to have said. Police have claimed they aren't shielding him. 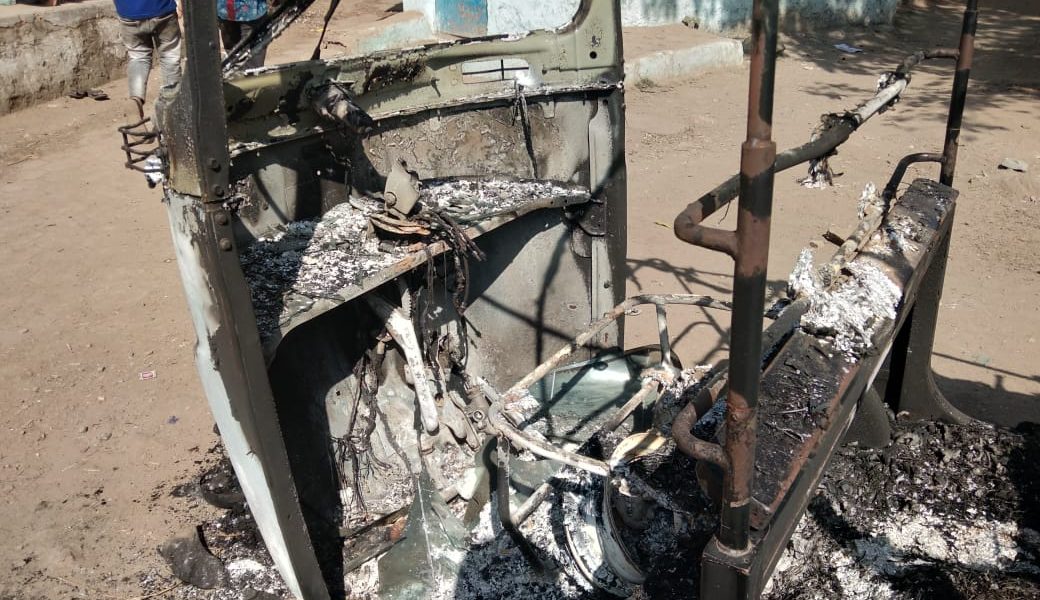 The auto belonging to Saleem Beg, charred after allegedly having been set on fire by Bunty Upadhyay in MP's Khandwa district. Photo: By arrangement

New Delhi: Police have been accused of invoking lighter charges to protect a serial offender after the latter allegedly set fire to property belonging to two Muslim families, assaulted a Muslim man, hit his sister and threatened two Muslim children to leave a locality in Madhya Pradesh’s Khandwa district.

“This is a Hindu colony, we don’t need Muslims here,” Bunty Upadhyay is learned to have told one Saleem Beg of the Kodiya Hanuman Mandir locality.

On the night of Thursday, January 20, Beg’s autorickshaw and the house of one Shoukat Ali were set on fire.

According to Khandwa superintendent of police Vivek Singh, Upadhyay is a habitual offender who had attacked Shoukat Ali, a painter, on January 5, 2022 and was arrested for attempt to murder. A day after he got bail on January 19, he allegedly threatened the fellow Muslims of the locality, demanding they move out. 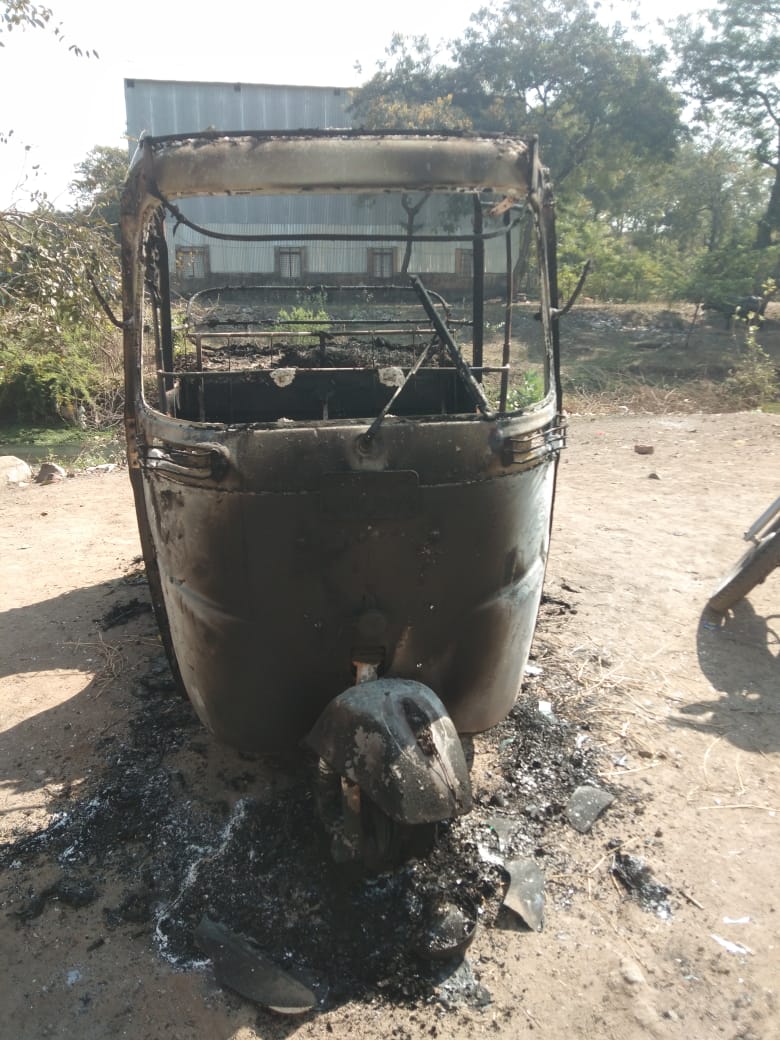 The auto belonging to Saleem Beg, charred after allegedly having been set on fire by Bunty Upadhyay in MP’s Khandwa district. Photo: By arrangement

The next morning, residents allegedly found Ali’s house and Beg’s auto rickshaw charred. Police have claimed additionally that Chandrakanta’s backyard had also been set on fire. The Wire could not reach Chandrakanta but managed to speak to Ali and Beg’s families over phone.

The Kotwali police of Khandwa district registered six separate FIRs against Upadhyay since January 5, 2022 based on the complaints made by victims.

Of six, three FIRs were registered on January 21 under sections 435 (mischief by fire or explosive substance with intent to cause damage to amount of Rs 100 or in case of agricultural produce Rs 10), 294 (obscene acts and songs) and 506 (punishment for criminal intimidation) of the Indian Penal Code for setting property belonging to three people on fire.

Two FIRs were registered on January 20, after Upadhyay threatened Beg and his family over moving out of the locality, and for assaulting Shaukat Ali’s sister Kamroon Bi when she was sitting outside her house alone.

The last FIR against Upadhyay was registered on January 5 under section 307 (attempt to murder) of the IPC for attacking Shoukat Ali with a beer bottle after the latter asked him not to abuse the Muslim community.

“A team has been formed to arrest the accused,” said SP Singh.

The two Muslim families have claimed that despite repeated complaints, police refused to register FIRs under sections having to do with communal targeting.

“He targeted us for being Muslims,” said Shoukat Ali’s wife, 48-year-old Akeela Bi.

On January 5, 2022, Shoukat Ali’s daughter and her husband came to Khandwa from Indore to meet their parents. When family was having dinner around 8 pm, Upadhyay, standing close to Shoukat’s home, begun making indecent remarks against the Muslim community while drinking beer with his friends. When Ali objected, Upadhyay attacked him with a beer bottle.

Ali was in hospital for four days and discharged on January 9 after the beer bottle attack. Ali’s family shifted to Indore fearing subsequent attack from Upadhyay’s accomplices, Akeela Bi said.

She further said, “When he got bail on January 19, the following day he attacked my sister-in-law who was sitting outside my empty house. He hit her on the face with a rubber pipe for not vacating the locality. Hours later, he went to Saleem Beg’s home and threatened his two teenage kids to leave the locality and hurled abuses. Subsequently, Saleem lodged an FIR against him at Kotwali police station. The next morning, he burnt my house and charred Saleem’s auto, parked outside his gate. We lost the earnings of our entire life.”

“If police would have arrested Bunty on January 20 upon hearing our complaint, everything would be normal. But the Police chose otherwise,” said Shoukat’s sister Kamrun Bi.

Kamrun and Saleem both reported the matter to police in the evening.

Speaking to The Wire, Saleem said, “On January 20, Bunty came to our house and threatened our two children aged 12 and 13 to leave the house, or else they would be burnt alive. This is a Hindu colony, we don’t want Muslims here, he said.”

“We lodged an FIR late in the evening and on the next morning, our auto rickshaw worth Rs 2.5 lakh burnt to ashes,” said the 51-year-old who added that his wife had recently had a surgery and all his savings have gone dry.

The victims alleged that Kotwali police took advantage of their illiteracy and registered an FIR on light charges.

“In all our oral complaints, we outlined that the reason why we were being attacked was because we were Muslim. I have even told them that before setting the house on fire, he tore apart pages of the Quran. I found the pages a day after the incident,” alleged Akeela, adding that she had no idea how else to impress on police that the intention of the attackers was communal.

Demanding strict action against Upadhyay and his accomplices, members of the Muslim community under the banner of Alpsankhyak Vikas Committee handed over a memorandum to the SP, raising objections against the police’s alleged inactivity.

Speaking to reporters after meeting with the SP, Sohail Khan of the committee said, “The way police have lodged the FIRs, it appears that the police is trying to protect the accused. Despite repeated oral complaints by the victim that they were attacked because of their faith, police did not mention it and suitably invoked light sections.” 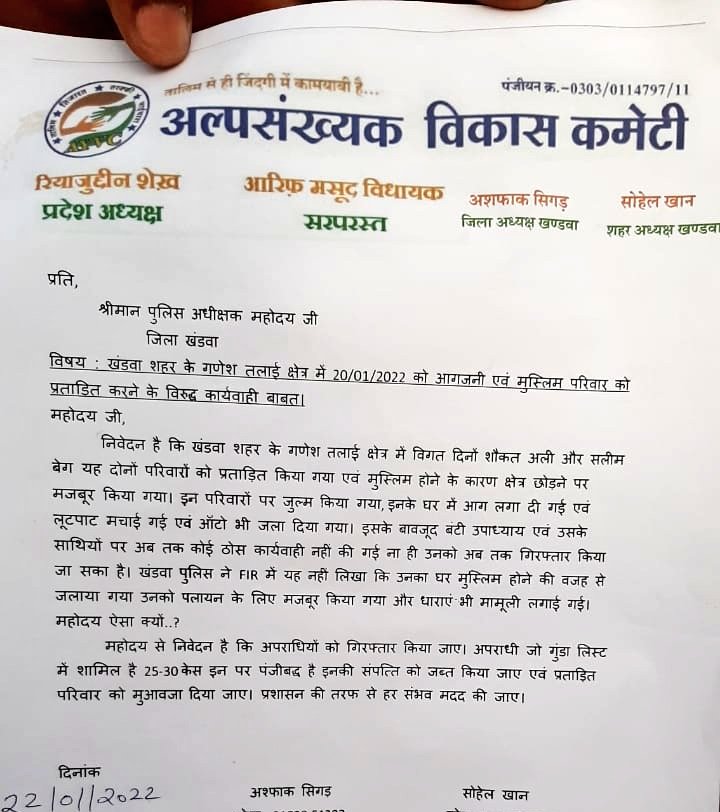 Demanding strict action against Upadhyay and his accomplices, members of the Muslim community under the banner of Alpsankhyak Vikas Committee handed over a memorandum to the SP, raising objections against the police’s alleged inactivity. Photo: By arrangement

He asked, “It has been two days, the accused are still absconding. When the police themselves are claiming that he is a serial offender, why not invoke the NSA or pressure his family to surrender?”

Ashraf Seegar, another member of the Alpsankhyak Vikas Committee said, “Where are the ruling party leaders who talk about sabka saath, sabka vikas (‘development with all, for all’)?”

When The Wire asked Director General of Police, Madhya Pradesh, Vivek Johri, about the victims’ allegation, he replied, “Why will police protect a habitual offender? The police have registered the case based on the complaints made by the victims. But, if the victim’s family feels that the police didn’t write their statement well, then they should complain to SP and I will make sure to add those points.”

Speaking over the phone, the DGP emphasised that it is a case of arson, that FIRs have been registered and that the culprit will not go unpunished.

Khandwa police additionally told The Wire that Upadhyay is a contractor has over 25 cases of assault registered against him in various police stations of the district.

Two days after the incident, in a joint letter to Khandwa SP Vivek Singh, the victims once again said that they were targeted owing to their religious identity.

They claimed that the Kotwali police is trying to paint a matter of religious persecution as a day-to-day fight by intentionally invoking light charges. “Officers if the City Kotwali police station are intentionally making the case weak by invoking light sections of the IPC. Hence, we urge you to add stringent sections of the IPC in the FIRs registered against Bunty and take strict action against his accomplice as well,” the letter said.

They urged for FIRs to be filed under the newly passed Madhya Pradesh Recovery of Damages to Public and Private Property Law, 2021, so that their losses can be recovered from the accused.

This could be the first application under the new law which was signed by the governor on January 6, almost a week after the bill passed in the assembly with voice vote.