Kashmiri Pandits Are a Pawn in the Games of Hindutva Forces 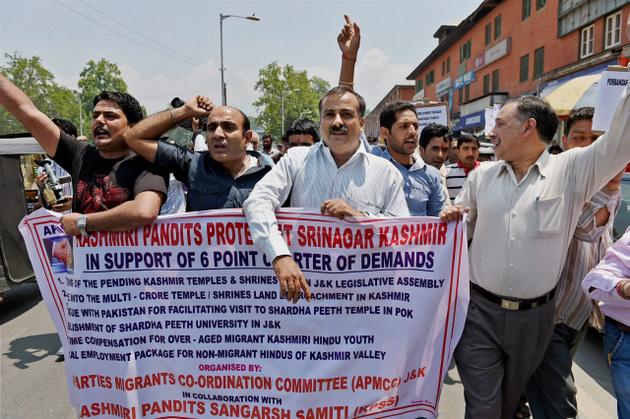 I recently appeared on the Al Jazeera Head to Head programme where I was a panellist for Mehdi Hasan’s interview of BJP/RSS veteran Ram Madhav. Among the topics discussed (relating to the BJP/RSS ideology of Hindutva), was the issue of Kashmir. I am a Kashmiri woman, a feminist, author of a novel called Residue (with Kashmiri protagonists), and an academic who has, for over a decade and a half, worked on issues of identity, political economy, Kashmir and Bhutan.

So, here’s my question – in contemporary Indian discourse, what does it mean for a Kashmiri Pandit woman to speak in non-communal terms about the history and politics of Kashmir? Like the eminent Malayalam critic stopped from writing on Ramayana because he was reduced to being “just a Muslim”, it means – in the climate of communalism – I can only be KP in the sense of “Kashmiri Pandit”, but not Kashmiri and Proud, or Kashmiri and Progressive.

As soon as I mentioned the internationally well-documented travesty of justice in Kashmir (militarisation, extra-judicial killings, rapes, enforced disappearances, draconian legislation such as the Armed Forces Special Powers Act or AFSPA), a fellow panellist on the show — academic Gautam Sen, a former spokesman, Overseas Friends of the BJP — accused me of being a “representative of the Pakistani Embassy”, a shockingly defamatory remark for which he refused to apologise. I objected to this, pointing out that this was about human rights and he would know my stance on Balochistan if we were discussing Pakistan. And before I had a chance to complete my intervention, Ram Madhav said that he expected me to focus on Kashmiri Hindus, to which I replied that all Kashmiris have suffered, regardless of their religion.

Some of these exchanges are not on the final programme, but anyone who has heard me speak or read my work on Kashmir would know that I stand for Kashmiriyat and oppose the communalisation of Kashmiri identity. As I said towards the end of the programme: Kashmir is not “owned” by India or Pakistan. Yet, both these postcolonial nations are interested in the territory of Kashmir, not the Kashmiris themselves, who have been made a pawn in the mutual power-posturing.

Since the programme aired, I have been at the receiving end of abuse on email, Twitter, Facebook and on the phone. I’ve been slandered variously (pro-Jihadi, ISIS supporter, blot on Hinduism etc), called and texted by trolls at 2am, received threats of death and legal action, been accused of being funded by West/ISIS/Sonia Gandhi/Pakistan/Arabs, and warned to expect a further campaign of hate speech. In addition, I’ve experienced the special subcontinental version of misogyny and sexism reserved for critical female commentators in the public sphere (called a prostitute, whore, daughter of a bitch, victim of Love Jihad etc).

Intimidation in Indian politics and society is not new. A long time ago, at Delhi University, when I stood in the college elections for the President of the Economics Society at Shriram College of Commerce (SRCC), I received phone calls suggesting that I withdraw my candidature if I didn’t want to be raped or physically attacked. But it is with my spoken and written work on Kashmir that I have come to be well-acquainted with (Kashmiri) Hindu right wing bigots who send numerous messages threatening, accusing and abusing me and my family in specific terms. The general gist of their venom is that Kashmiri Muslims need to be shown their place.

These trolls, the bhakts, the self-appointed ‘super patriots’ of an increasingly intolerant strand of politics have a special constituency among the Kashmiri Hindus who have been radicalised by Hindutva forces over the last two decades since they were forced to flee Kashmir in fear, due to killings and intimidation from Kashmiri militants. KPs have suffered trauma, poverty, forced exile and deaths in camps. But, should this make them unable to recognise what the Indian state has done to Kashmiri Muslims?

KPs and KMs, both of whom have become increasingly polarised, should recognise their common historical identity as Kashmiris (who, like Kashmiris of all religions and regions) have been let down by the postcolonial states in their pursuit of — at various times in post-independence British India — authoritarian-paternalistic/anti-communist/communal/militarist/mercenary agendas. The Kashmiri Pandit issue is used by Hindutva ideologues to bash and demonise (Kashmiri) Muslims. Ultimately, for the Hindutva forces, what they see as the inherently traitorous nature of Kashmiri Muslims qua Muslims is more problematic than even a Muslim majoritarian state such as a clearly ‘Islamic’ Republic of Pakistan. The Hindutva forces stand to gain from the simmering conflict by selectively timing the political leverage that they can gain from this communal divide of Kashmiris. Maybe this is why JeM (Jaish-e-Mohammed) attacks are attributed by Narendra Modi to “enemies of humanity” when they happen in Pathankot (and though a Union Minister claims there is credible evidence that they were planned in Pakistan), but similar attacks in Kashmir are the work of Pakistani terrorists that justify draconian laws and affect peace talks.

Apart from a selective reading of history (that ignores events like the 1947 Jammu Massacre or the 1987 elections), pursuing an inconsistent policy, and failing to challenge the buildup over time of a diverse array of vested interests, the Hindutva position has been to propose problematic policies (separate townships for the return of KPs) and project the constitutionally enshrined special status of Kashmir (Article 370, whose provisions have been progressively diluted) as appeasement.

The political expediency of the PDP-BJP alliance currently in power is just the latest in the series of ‘Mandarin- Machiavelli interactions’ engineered to enable Hindutva forces to make further inroads into J&K. This year a Muharram procession in Srinagar was once again banned while the RSS marched with weapons in Jammu. As Haseeb Drabu — who worked with Ram Madhav on forging the PDP-BJP coalition — has said, “nothing can prevent RSS from coming to Jammu & Kashmir“. The RSS-backed Muslim Rashtriya Manch (MRM) is planning a large convention in Srinagar in May 2016. Even after the terrible times Kashmiris have seen, there is more miserable politicking ahead.

The Indian government’s inability and unwillingness to face the facts on Kashmir was evident in Ram Madhav’s statement that the only outstanding issue for him was the status of Pakistan Occupied Kashmir. This is reflected in the maps in India which show J&K as including Gilgit-Baltistan (and areas under Chinese control), without so much as a reference to the the Line of Control; in the refusal to abrogate emergency laws after over two decades; the refusal to accept that Pakistan infiltrated militancy aside, there is a resilient indigenous demand for azaadi that has survived the quelling of the militancy and the promises of development. How can there be the political resolution of an issue through dialogue when there is no recognition of realities on the ground?

As a Hindu majoritarian, revanchist attitude gains ground, the space for honourable dissent in the Indian democratic public sphere is diminished in a thousand ways. The right wing populism of the BJP and its Sangh parivar affiliates has constructed and legitimated anti-minority resentment to create an idea of Hindus as “the people”; a virtuous, homogenous entity that is acting against a purported establishment and is justified in having a certain contempt towards the substance of a democratic functioning. In many significant aspects, the Hindutva understanding of the political follows Carl Schmitt, the influential German Nazi jurist and theorist, who supported political authoritarianism and saw the essence of the political as the antagonism of the friend/enemy distinction. This manufactured antagonism against the Other (us versus them) can be most sharply drawn in Kashmir where the Other combines Muslim with aggressor/threat/pro-Pakistani.

It is up to Kashmiris – in whose name the toxic Hindutva agenda functions – and all conscientious Indians  to continue to say ‘Not in my name’ when the organised state apparatus acts to polarise, oppress, and deny people their just aspirations.