Finding Hate, Despair and Hope on the 'Karwan-e-Mohabbat'

"I want those who lynched my husband to be punished, not for revenge, but to ensure that no one has to go through what my children and I have undergone." 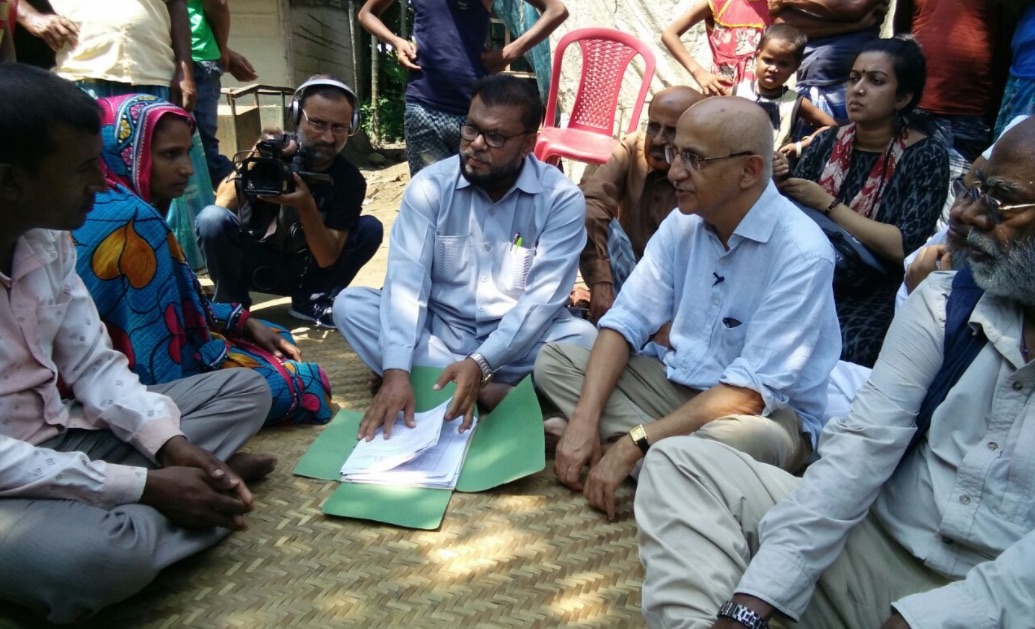 The Karwan-e-Mohabbat, or peace yatra, is a movement led by activist and author Harsh Mander that is making its way across the country, visiting places where lynchings and hate crimes have taken place and attempt to forge links between different communities.“It’s a call of conscience to India’s majority,” Mander said in a statement about the Karwan. Below are Mander’s notes from Day 3 and Day 4 of the yatra.

On a bumpy bus journey from Giridih to Ramgarh in Jharkhand, trying to type my short update for today.

My heart very weighed down in a day with many reminders of why this Karwan was important to attempt.

The cowardly killing of a fearless, charismatic, influential and uncompromising fighter against religious hatred and bigotry, Gauri Lankesh, of course cast a long shadow on our hearts. A sobering reminder that the climate of hate, intimidation and fear is mounted not just against minorities and Dalits, but also against those who defend their rights and fight for constitutional values.

We went to a village in Giridih and found a terrifying replay of the Akhlaq lynching, not just of the events but of communal rationalisations in the village to justify the lynching. The old man who was lynched – Usman Ansari – has just about survived the lynching, but is terribly broken both in body and in spirit. He is still in hiding months after the lynching. The organisers did not let even us know where he had taken refuge, and agreed to only a small group from the Karwan visiting him in secret.

The story that unfolded on July 28, 2017, had many echoes from Dadri. One Muslim household alone in a Hindu settlement. The rumour that he had killed a cow, when a decapitated cow was mysteriously found in the village dump yard. His neighbours attack him brutally in his home, beating him until he is unconscious. They take him for dead, and set on fire his home, reducing it to ashes. They are about to set his body aflame. His life is saved by seconds because of the arrival of the police and the district commissioner (DC).

The one silver lining of the story is the exemplary role of the young DC, and the police under his guidance. The crowd stones them and their vehicle. But they rescue the old man, and rush him to Hazaribagh hospital. He is unconscious for eight days, and treated in Ranchi hospital for two months. His scalp is still wounded, his hand bones crushed to pieces.

But none from his village tried to save him during the killing, and none have reached out to him since then. The state administration has also given no financial help. The old man wept often when he spoke to us About how his neighbours tried to kill him. About how his sons were out begging for money in the community to help his medical expenses and feed his family. About one son who has lost his mind after the trauma. About his resolve to return to his village, even if no one wants him, even if he may be attacked again, because there is nowhere else he can call home.

Our even greater sadness was in the village meeting that followed. Around 300 men had gathered. We spoke but there was no remorse. They were convinced that Usman was guilty. They asked why we did not express sympathy with the ‘innocent’ men who the police had arrested, and the man injured in the leg when the police fired to disperse the mob that wanted to burn alive the unconscious Usman. A replay of the same arguments that we heard in Dadri. That Muslims were guilty by definition, that Hindus were innocent and nationalist by definition. Our arguments appealing to justice, and to even elementary humanity, only led to anger and hostility among most who gathered there from the majority community, even members of progressive and left organisations. No compassion, no contrition of any kind.

Two reminders – the Lankesh killing and the absence of any compassion for the aged and broken survivor of the attempt by his neighbours to lynch him – of why this Karwan-e-Mohabbat needed to be done.

The fourth day of our Karwan began with an unexpected healing moment, when the local gurudwara in Ramgarh district headquarters in Jharkhand, where we spent the night at a dharmsala, invited the Karwan-e-Mohabbat to the gurudwara to endorse its call for solidarity and love. They quoted from Sikh scriptures verses of both Nanak and Kabir to underline its message of inter-religious unity and tolerance. Speakers reflected on how relevant this message was for our times of rising hate. The small local Sikh community settled there after Partition. We remembered the two storms of hate that twice destroyed their lives – in 1947 and then again in 1984 – and how they should teach them the consequences of hate violence today against other minorities.

We then drove to the village Manua in Manoa block of the district, and met there the strong unbroken widow Mariam Khatoon of a man who had been lynched two months earlier in the busy marketplace of Ramgarh town.

On the morning of June 27, 2017, coal trader Amiluddin Ansari leaves his home in his car. About an hour later, imagine the horror of his 17-year-old son Shahban when he receives a WhatsApp video of his father being lynched brutally by a mob of young self-styled cow vigilantes. He jumps blindly onto a motorcycle to drive to the town in a desperate bid to save his father, but his bike crashes a little distance from his home. He calls his 22-year-old brother Shehzad, who leaves immediately with his mother. When they reach Ramgarh, they find their car overturned and gutted in the centre of the market, and Shehzad’s father’s blood stains on the streets. People tell them that the police have taken Amiluddin for treatment to the civil hospital in Ranchi.

They drive in a rush to Ranchi. There they learn that he had died at the hands of the mob in the Ramgarh market. The police does a hurried secret postmortem without allowing the family to see the body, and to date have refused to share with them the contents of the report. It takes multiple visits to the police that long night before they were given the body late after midnight.

In many episodes of lynching, we are seeing this bizarre new social phenomenon of hate – of the lynching video. We watched in horror the video that Amiluddin Ansari’s sons saw on their phones, even as their father at that moment was succumbing to his attackers. These videos are typically taken by the attackers themselves. You watch them in Ansari’s lynching video laughing as the battered bleeding man begs for his life, as though this was a sport, a reality television show or a video game. At one point, a boy grabs the terrified man’s face and turns it to the camera, asking the videographer to take a good shot. There are pictures of piles of red meat on the streets, but none of these actually being taken out of the car. No one comes to the aid of the hapless man before he dies.

The state administration has done nothing to support the bereaved family. The younger children have dropped out of school. The meat was sent to check if it was cow meat. A group of local boys angrily protested when the police failed to arrest those of the attackers who could be easily identified from the video. The police has slapped a series of criminal charges against these protesters, who spent 25 days in jail. Some of the attackers were later arrested, but there are many others who eyewitnesses are willing to name. We saw the photograph of a young man beating Ansari with a fibreglass baton that closely resembles that of the police.

Mariam Khatoon was firm and composed as she spoke to us when we met her, breaking down only once when she recalled how difficult the police made it for them to get her husband’s battered body the night after he was lynched. “I only want justice,” she said to us again and again. “I want those who lynched my husband to be punished, not for revenge, but to ensure that no one has to go through what my children and I have undergone.”

In the aman sabha meeting that was organised in Ramgarh after we met Mariam Khatoon and her family, we took solace that there were at least no public rationalisations for the hate lynching as we heard in Giridih the night before (for the lynching of Usman by his neighbours on the charge that he killed his cow a day before Ansari had been lynched). A few senior speakers from the town soberly agreed with me and said that they should have broken their silences and condemned the lynching when it happened, and not remained silence. They concurred that their silences made them complicit in some way in the hate crime. They agreed to constitute an Aman Insaniyat Committee to prevent and respond to hate crime in their district, and to support its victims.

In the afternoon, we arrived at Ranchi. Here the Christian community had organised a massive meeting to coincide with the Karwan to protest the draconian anti-conversion law recently passed by the Jharkhand assembly. The law, they feared, was designed to instil fear in the hearts of the small Christian minority and to tear apart tribal society, in which in the same family, there may be people who worship by their traditional Adivasi Sarna faith, some who are Christian and some who identify themselves as Hindu. The gathering endorsed the importance of solidarity, of various oppressed minorities and castes and liberal elements, to stand together to fight violence and discrimination against any peoples, and to uphold and practice love, the call of the Karwan.

And now with a day for travel, we move to Mangalore in Karnataka. The Karwan there will both mourn and pay tribute to the fearless defender of justice and secular values Gauri Lankesh, and continue our sombre journey of atonement to the families who were traumatised by this new rising social epidemic of hate lynching.

The Karawan is crowdfunding the journey and is seeking donations here.