Anti-Muslim sentiment, already palpable in Karnataka ever since the Hijab row took off across the state, flared up further with the latest incident. 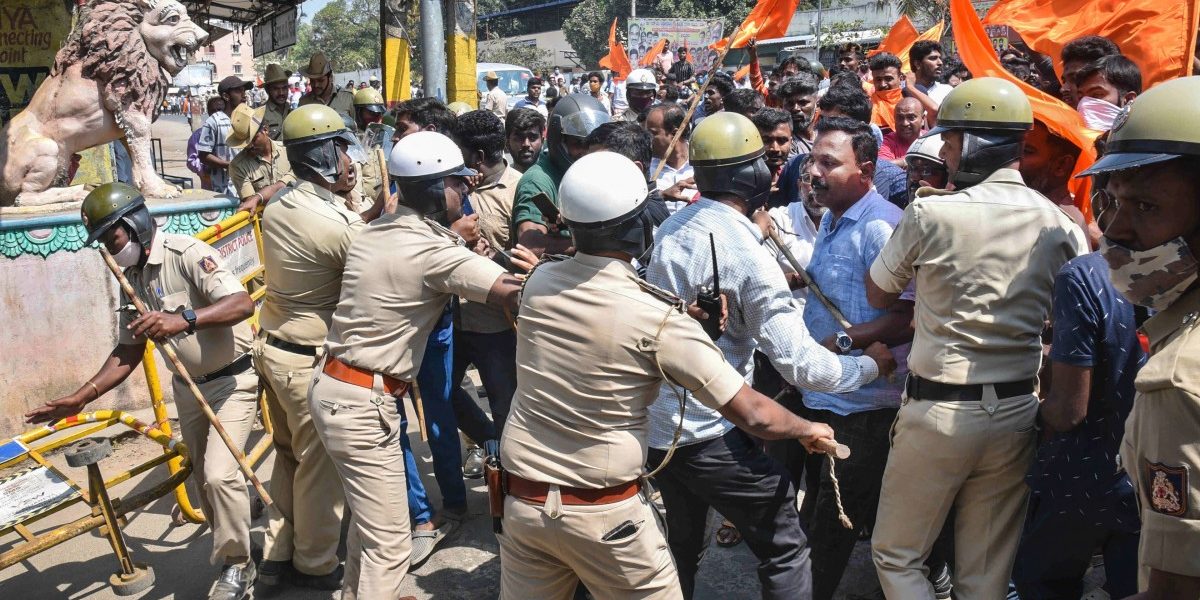 Police personnel attempt to maintain law and order as rioters pelt stones, amid tension over the murder of a member of Bajrang Dal on Sunday night, in Shivamogga, Monday, Feb. 21, 2022. Photo: PTI.

Mumbai: The atmosphere in Shivamogga has been tense since Monday morning after the town woke up to the murder of a Bajrang Dal activist. Thousands of Bajrang Dal activists from across the town and neighbouring districts gathered in the Segehatti area – where the deceased lived – to take out a procession. There have been instances of vandalism, including the torching of several private vehicles and public property. 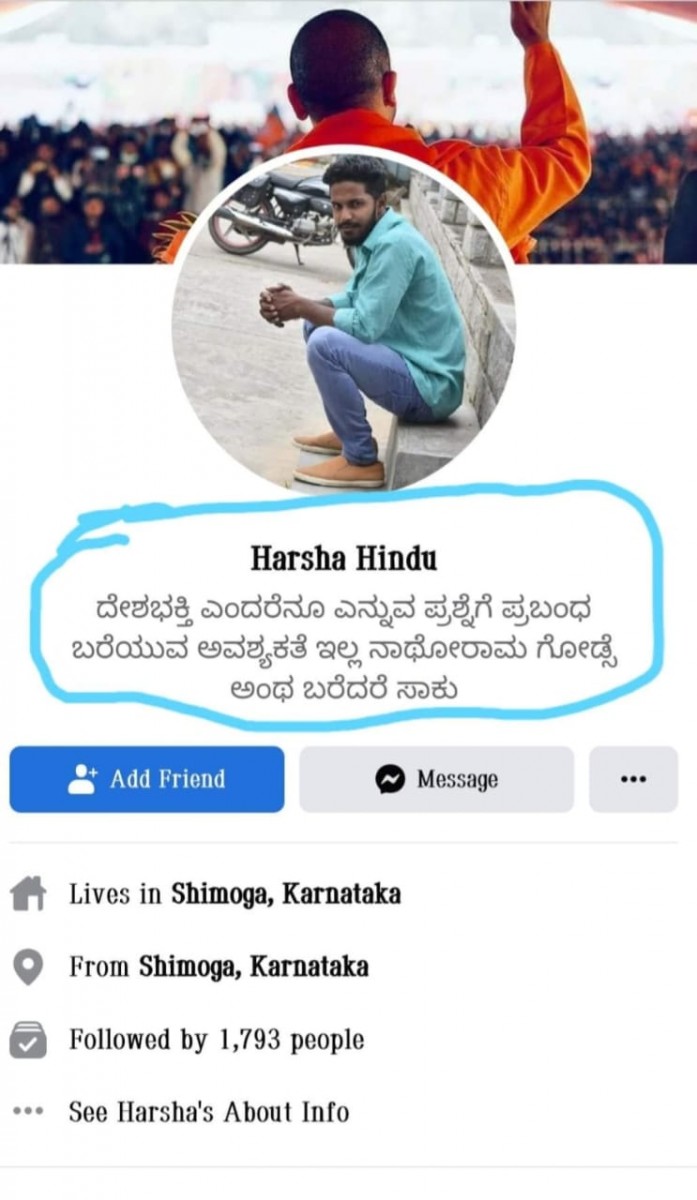 The deceased man, Harsha, who went by the name “Harsha Hindu” on social media, was allegedly killed by five people. Of them, three persons were arrested on Monday. The three men, all belonging to the Muslim community, have been taken into custody, and the police said they are yet to ascertain the motive behind the killing.

Despite the prompt action by police, the crowd went berserk. Anti-Muslim sentiment, already palpable in the state ever since the Hijab row took off in several schools and colleges across the state, flared up further.

According to the Indian Express, ‘Crime records for Shivamogga city reveal that Harsha Hindu was involved in at least five cases of assault and attempt to murder, including several communal incidents of attacks on rival anti-social elements from the Muslim community.”

Men associated with Bajrang Dal decided to take a public procession across different parts of the city. The procession began around 1:30 pm and continued for over five hours, said Chandrahasa Hiremalali, a senior journalist working with the leading Kannada paper Prajawani. Hiremalali was on the field and witnessed the vandalism and attack on his fellow journalists at several spots.

Hiremalali said it was the first time he saw such anger directed towards the press. “We were out there doing our jobs. But reporters and photojournalists were attacked, their bones were broken and their cameras were smashed,” he added.

Two journalists – Ningan Gouda of the Press Trust of India and Rafeeq from a local Urdu press Ajka Inquilab – are among those who suffered serious injuries while covering the violent procession in the town. Both have been hospitalised and are undergoing treatment for multiple injuries.

According to eyewitnesses, the crowd had gathered and was on the ground for over five hours. The police were present at the spot, but played a “passive role” in handling the situation.

“This procession was planned with the idea of causing commotion. It was an agitated crowd with clear anger towards one community. The police should have ensured that the procession did not take off,” said a journalist who was on the ground. Instead, the police allowed them to move from one area to another, and the violence spread across many parts of the city, he added.

The protestors attacked shops and establishments belonging to the Muslim community. Private property in local Muslim residential areas were also attacked. Eyewitnesses said that stones were pelted on garment stores and other commercial establishments. “And those filming the miscreants were attacked too.”

The violence that began in the Segehatti area spread in no time across Gandhi Bazar, Nehru road, Ramanna Shetty park and finally was brought under control at the Shivappa Nayaka Circle. A senior police official told The Wire that the police had to resort to tear gas to bring the mob under control.

“It was an unruly crowd and even lathi charge was not enough to bring them under control. A few rounds of bullets were fired in the air and then tear gas was used. Yet, it took over five hours to control the situation,” the officer, who is on the ground handling the situation, said.

Shivamogga district collector Dr. Selvamani R told The Wire that Section 144 of the Code of Criminal Procedure has been applied across the district.

“The situation as of now (around 9:30 pm) looks under control. But as a precaution, we have applied Section 144 in the district till Wednesday morning,” he said.