Across the state, women-only protests reiterated their constitutional right to wear a hijab in educational institutions.

Students of Sri Sharada College at Basrur in Udupi, after they were denied access to their classes and made to sit in a different room, on February 07, 2022. Photo: Special arrangement

Udupi (Karnataka): Muslim women on Monday held protest events at different locations in Karnataka demanding the protection of their constitutional rights, including religious freedom. The protests were organised in the backdrop of female students wearing hijabs being denied entry to various junior and graduate colleges in the state.

Women-only protests were held in several locations across the state, including Bengaluru, Mysuru, Hassan, Kolar, Shahapur, Shivamogga and Udupi.

During the protest in Udupi, hundreds of hijab-wearing women, including university students and housewives, demanded protection of their “constitutional rights”.

Hijab-wearing students in the state are facing challenges from Hindu extremists, the BJP-run state government and some college managements. Hindutva groups made Muslims students’ head scarves an issue in several Karnataka colleges in recent days, and organised their members and sympathisers among the students against young Muslim women. Many colleges saw Hindu students coming to the classes wearing saffron shawls, a cloth they usually don’t wear, “to protest” the presence of Muslim female students in hijabs. 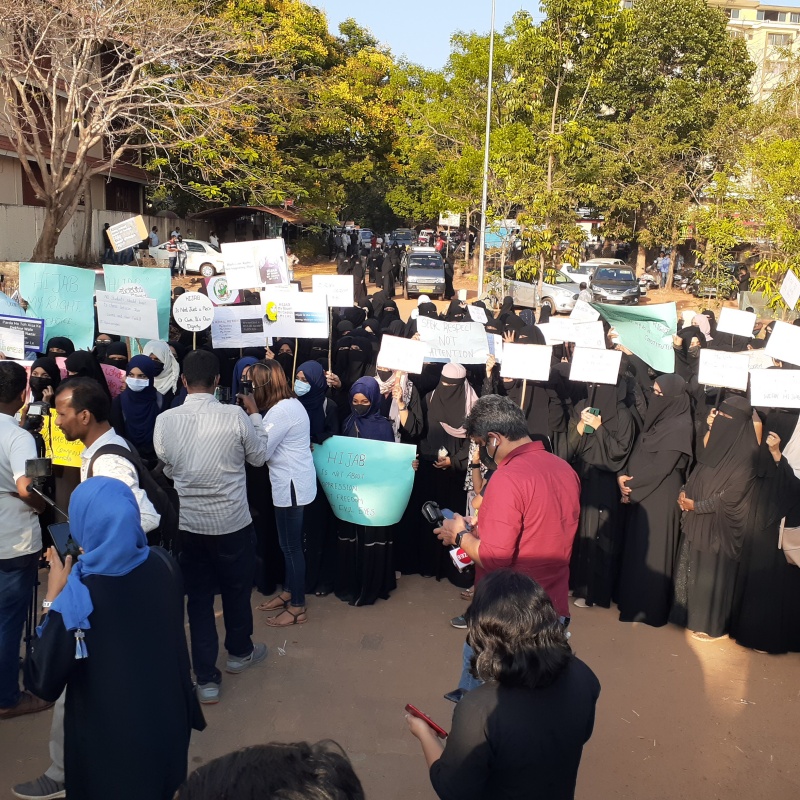 A view of the Muslim women’s pro-hijab protest in Udupi, Karnataka, on February 07, 2022. Photo: Muhammed Sabith

On Monday (February 7), Muslim female students continued facing problems at their colleges. While Muslim students did not even appear in some colleges, in other colleges, the management continued denying them access to classes and even made them sit in a separate room, sparking concerns about segregation.

Dr Chandravathi Shetty, principal of Sri Sharada College at Basrur in Udupi, where the Muslim students were allegedly made to sit in a separate room, refused to comment over the incident.

Professor K. Umesh Shetty, principal of Dr. B.B. Hegde First Grade College in Udupi’s Kundapur, said “no student came to the college with headscarf” on Monday. When asked about the college’s stand on the hijab, he said “we’re going as per the order of the state government as well as the management (sic),” he said. “They [female students] are not supposed to wear the headscarves inside the class.”

Meanwhile, there are reports of more intense and aggressive protests by Hindu extremist students and youth on Tuesday, including heckling of Muslim female students, stone pelting at a college and replacing the national flag with a saffron flag.

A Muslim woman activist who spoke at the protest event in Udupi said their struggle is “to protect our sisters’ education, our dignity, our religious freedom and our country’s Constitution”. “It’s not a hijab controversy, it’s a saffron controversy,” adding that the hijab-wearing women become “doctors, engineers and pilots”.

Rumana, 20, a student of Bachelor of Physiotherapy (BPT) at a university in the region, was among the participants at the pro-hijab protest in Udupi. “Wearing hijab is our fundamental right,” she told The Wire. “No one can snatch it from us.” Rumana said she wants the government “not to create divisions” among the students on religious lines. Rumana said her university, the Manipal Academy of Higher Education (MAHE), allows her wearing hijab and never discriminates against her for her clothing.

Another protestor, Azmi, a 41-year-old housewife, said she decided to participate in the pro-hijab protest because “hijab is our fundamental right”. 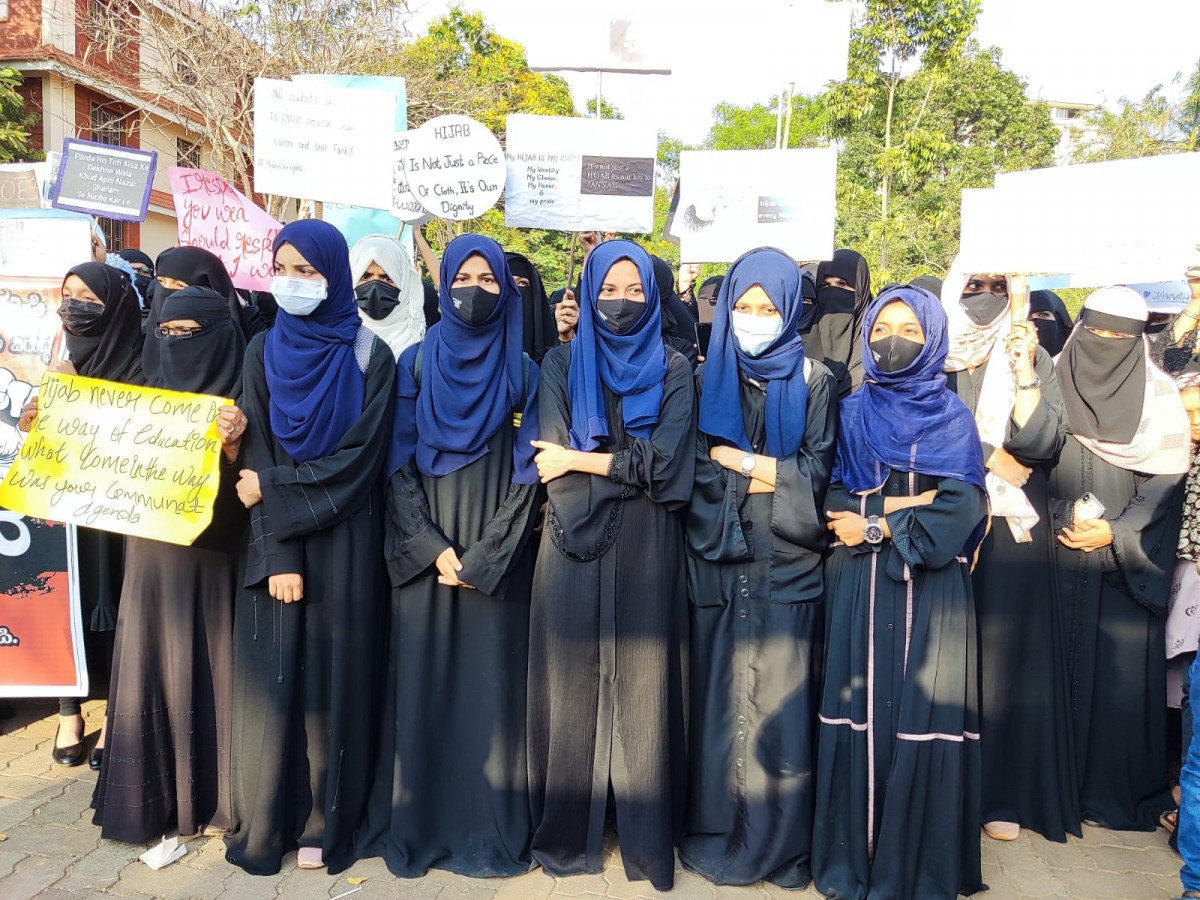 Students of the Government Pre University Girls College in Udupi, who first raised the issue of discrimination for wearing headscarf at colleges, during the Muslim women’s pro-hijab protest in Udupi, on February 07, 2022. Photo: Special arrangement

“We want our college respect our rights”

Students of the Government Pre University Girls College in Udupi, who first raised the issue of discrimination for wearing headscarves at colleges, were among the protestors gathered in Udupi on Monday. They said their non-Muslim friends and teachers turned hostile towards them after the issue attracted wider public attention. “Our [non-Muslim] friends were supportive in the beginning. They’re not supporting us now,” said Hazra Shifa, a student. “They even complained against us.”

The students also said they were subjected to online harassment after they raised their voice. “We are getting threats…our phone numbers, addresses and even the Aadhaar numbers have been leaked,” said the students.

Meanwhile, the state home department directed the police to probe the pro-hijab protests. “I have directed police to discover who is behind this development,” home minister Aaraga Jnanendra told reporters on Monday. Speaking to The Wire, the Udupi students said they and their parents approached Campus Front of India (CFI), a Muslim students’ organisation, for support. Masood Manna, a Karnataka state leader of the CFI, told The Wire his organisation is actively supporting the students. In a recent press conference in Bengaluru, the CFI leaders said the restriction of hijab in the colleges is “part of a larger conspiracy to dehumanise Muslim women”. Masood said the Muslim Okkuta, an umbrella group of different Muslim organisations in Karnataka, also supports the students’ cause. 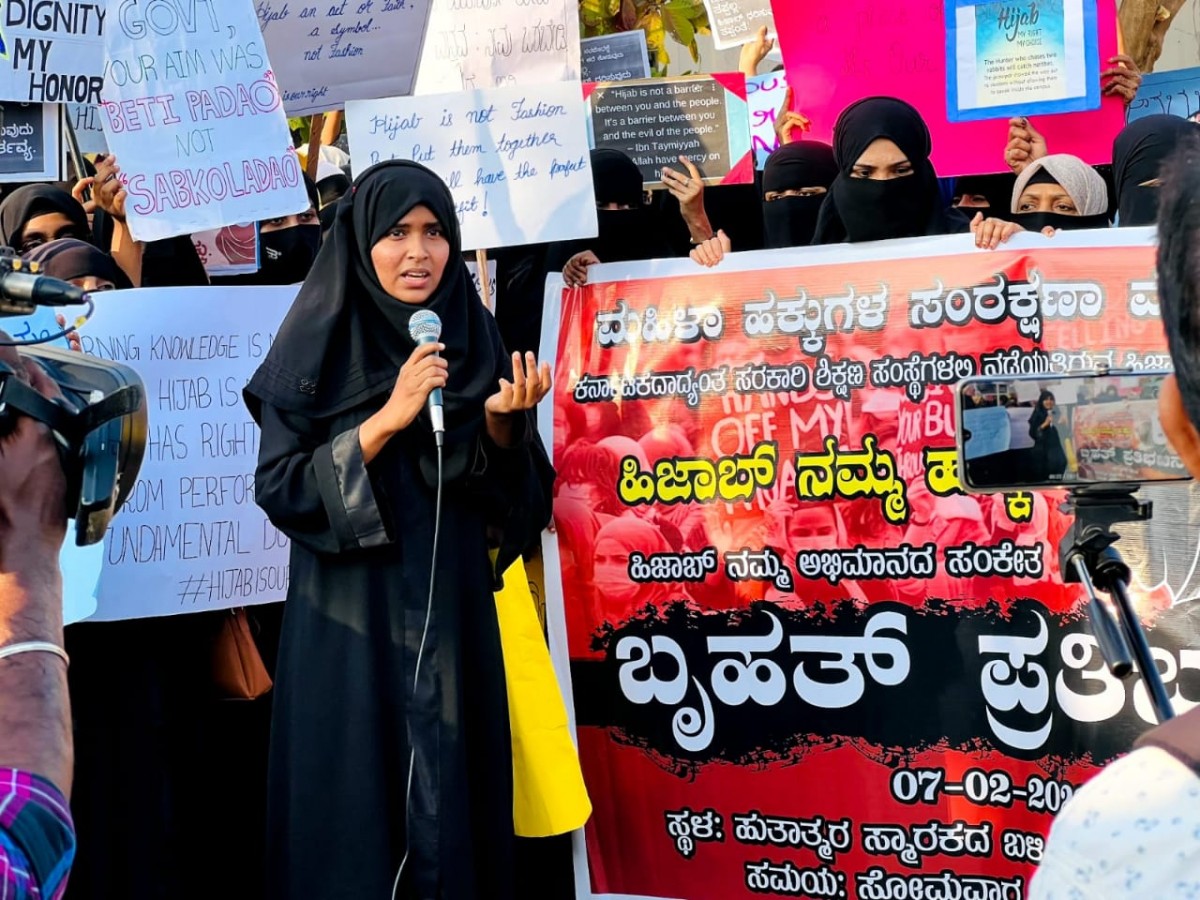 A Muslim woman activist speaks during the pro-hijab protest in Udupi, on February 07, 2022. Photo: Special arrangement

Just before Monday’s protest, the young Udupi girls told The Wire that their struggle is to protect their “constitutional rights” and for nothing else. “We have trust and belief in our country’s democratic system and judiciary. We hope our college will respect and value our rights,” they said. One of the Muslim students denied access to the classes recently wrote that her college was forcing her, and other Muslim women students, “to choose between studies and the hijab“.

The Karnataka high court is scheduled to hear a writ petition on Tuesday filed by a Muslim student who argued that wearing a hijab is her fundamental right guaranteed under Article 14 and 25 of the Constitution.

Former Karnataka chief minister and senior Congress leader Siddaramaiah said restricting the Muslim female students’ access to their classes is a violation of their fundamental rights. “This is an effort to prevent Muslim girls from getting educated. The head scarf is part of their religion … It is a violation of the fundamental rights of the students,” Siddaramaiah said. However, for the BJP, the students’ demand for hijab is similar to demanding the “Sharia law”.