When the BJP leader is under the scanner for his incendiary speech, it is telling that RSS mouthpiece 'Organiser' conducted an interview with Mishra, in which he gives himself a clean chit. New Delhi: Although the Rashtriya Swayamsevak Sangh (RSS) and the Bharatiya Janata Party (BJP) function more like conjoined twins, both have taken great efforts to be seen as independent of each other. Time and again, the RSS has said that its role in society is purely “Manushya Nirman”, and that it has neither any intention nor the drive to become politically active.

However, days after the national capital was left torn by one of the worst communal riots in India, it appears that the two have dropped this pretence.

At a time when the role of BJP leader Kapil Mishra has been universally panned for fomenting communal clashes in Delhi, the RSS’s mouthpiece has mounted a defence for him. Organiser published a long interview with the controversial leader who blames everyone for the riots except himself.

According to him, his incendiary speech – in which he openly threatened to disobey the Delhi police and forcefully evict anti-CAA protesters – did not trigger the riots. Rather, the “tukde-tukde gang”, those who are “upset about the hanging of terrorist Afzal Guru”, which incidentally happened in February 2013, and those who “want to separate the Northeast from the rest of Bharat” are responsible for the riots.

As bizarre as it may sound at a time when large sections of political leaders, including Prime Minister Narendra Modi and national security advisor Ajit Doval, have appealed for peace and harmony among communities, Mishra’s responses to Organiser, in fact, fuel greater communal anger.

He selectively points out sporadic incidents of violence over the past few months and looks to blame Delhi’s minority community for it.

Also Read: BJP’s Kapil Mishra Has Issued an ‘Ultimatum’ to the Delhi Police. But Who Is He?

“The reality is violence has been going on in Delhi since December 16. The buses were set ablaze in Jamia; an Assistant Commissioner of police was hit with stones in Seemapuri, and an attempt was made to spread riot at Turkman Gate in Delhi. At the same time, railway stations in Bihar and Bengal were burnt, and public properties were set on fire in different parts of Uttar Pradesh and in rest of the country. All this has been happening for last 100 days in the name of CAA. Anti-CAA people were preparing for major violence in Delhi for a long time,” he says.

“Their grudge against with me (sic) is that Kapil Mishra is coming in front, ready to see them eye to eye and giving a call to clear the roads. If one stands today, then thousands will rise tomorrow. Therefore, make Kapil Mishra a villain, crush him so that no one else dares to stand up tomorrow,” he adds. 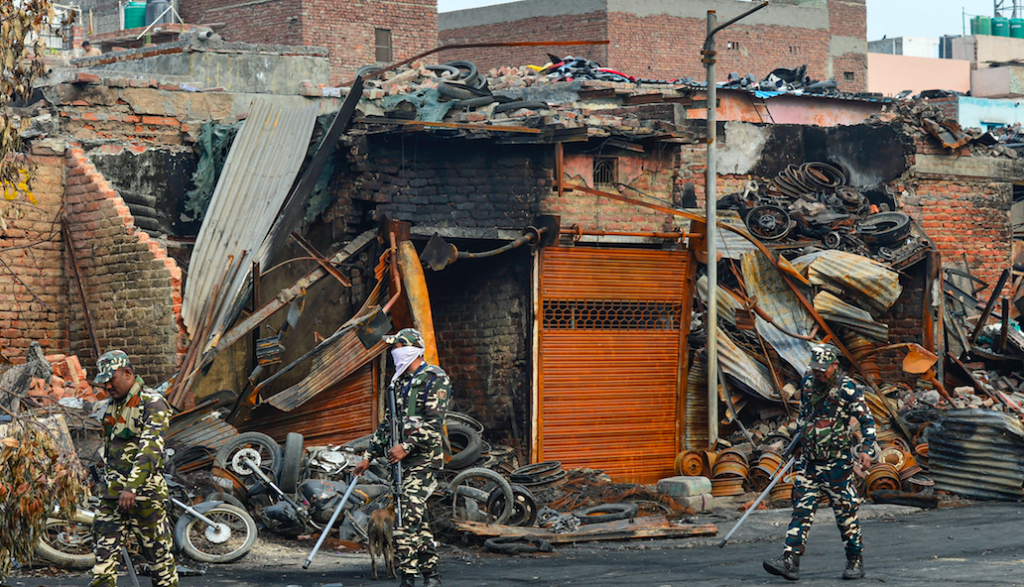 Mishra giving himself a clean chit is nothing new in this day and age. One may recollect that soon after becoming the chief minister of Uttar Pradesh, Yogi Aditynath prevented the state police from initiating prosecution against him in the 2007 Gorakhpur communal riots case. He was one of the primary accused persons in the case.

In his interview, Mishra, however, could not explain why these incidents of sporadic violence during anti-CAA protests happened only in BJP-ruled states, even as multiple protests elsewhere have carried on peacefully.

Such was his brazenness that he went on to make strong allegations against opposition parties and Muslims without producing even a shred of evidence.

Sample this: “There were no elections in Delhi when AAP leader Amanatullah Khan along with his people was setting fire in Jamia. There was no election in Delhi on December 17, when the Bangladeshi infiltrators were stoning ACP Rajbir in Seemapuri. When Turkman Gate was set on fire, then there was no election,” Mishra says to a question whether his loss in the recent Delhi assembly polls was somehow linked to the riots.

For Mishra, who is on a hate project perhaps, it wouldn’t be inconsequential to say that Khan wasn’t present when buses were torched near Jamia Millia Islamia, or the Delhi police’s indiscriminate action against students of the university has also come under scrutiny. Casting aspersions on the opposition without evidence has proven to be an instrumental tool for many like Mishra over the past few years.

If it was not the Organiser interviewing Mishra but an independent journalist, he would have perhaps been asked how he was so sure that those who pelted stones at ACP Rajbir were “Bangladeshi infiltrators” or those who set Turkman Gate on fire were anti-CAA protesters.

He went on accuse Bollywood personalities who have opposed the CAA of having links with “Dawood Ibrahim”. And added that those who are opposing CAA do not want to fight it out in courts but on the streets. One only wonders how Mishra or anyone else reached this conclusion, when protesters have for more than two months been trying to initiate a dialogue with the Union government, which has blatantly refused to engage with them.

The answer lies in Mishra’s prejudices against Muslims and their Indianness. Or, it may be a strategic line to perpetuate fear among Hindus against Muslims – to polarise Indian society further for political gains.

To a question on the government’s failure to open dialogue with protestors, Mishra says, “How will you explain CAA to those who did not understand in 40 years that polio does not cause sterilisation. They do not want to understand anything. There are videos of Muslim women claiming that they are being forced to sit on anti-CAA Dharna. At the site of the protests, instead of discussing CAA, they shout slogans of Kashmir independence.”

Each of his responses, however untrue, is dyed with a visceral hatred for Muslims. His whataboutery and Islamophobia aside, Mishra has also made it evident that the BJP, or the RSS, are in no mood to step back from their communal positions. And rather than repenting for such great loss to people and properties, their sole purpose appears to be fuelling communal angst among the majority community.

Lends weight to allegations against RSS

The RSS, in giving a platform to Mishra when his role in the Delhi riots is being examined, has made itself complicit. Scores of Muslims who were affected by the riots have been reiterating that the RSS is behind the riots. The RSS has lent weight to this allegation.

By inciting communalism, the Sangh parivar has made India a volatile ground for communal violence.

The Modi government has come as an able partner in this project. Despite several appeals by civil society, it has refused to book Mishra in a hate speech case. Rather, Mishra has been instrumental in collecting funds that would be used exclusively for Hindu victims of the riots.

Also Read: The Ideological Strategy Behind the Delhi Riots

And on Friday, the government even went an extra mile to ban two channels which, according to its own words, were “critical towards Delhi police and RSS.”

In its notice to Media One, the Information and Broadcasting Ministry had no qualms about stating their motive to ban the Malayalam language television channel. “Channel’s reporting on Delhi violence seems to be biased as it is deliberately focusing on the vandalism of CAA supporters. It also questions RSS and alleges Delhi Police inaction. Channel seems to be critical towards Delhi Police and RSS (sic).”

Mishra’s interview and the Union government’s notices to the television channels have made it amply clear that the only political model that the Sangh parivar has to offer to India is a blatantly communal one. The rest is a meticulously-curated PR act.