A detailed report finds that TV channels and newspapers were irresponsible in their coverage of the anti-CAA protests and the Tablighi Jamaat COVID-19 cluster.

Screenshots of Kannada TV media's reports from the report.

Mumbai: Campaign Against Hate Speech, a collective comprising lawyers, researchers, activists, students, and professionals, has found disturbing communal trends in the Kannada media’s coverage of the Anti-Citizenship (Amendment) Act protests and later the COVID-19 outbreak in the country. In a detailed report over 188 pages, it points at different incidents that were used to flare up communal tension and promote hate speech in the country.

The members of the drafting team of the report include Swathi Shivanand, Kishor Govinda, Manavi Atri, Mohammad Afeef, and Arvind Narrain. The team, along with a detailed analysis of news reports have also interviewed several senior journalists and political commentators in the Karnataka, the only state in southern India which has been amenable to the ideology of political right-wing forces to such a large extent that the BJP has been elected to power repeatedly.

Also Read: COVID-19: How the Kannada Electronic Media Is Baying for Blood

With the outbreak of the novel coronavirus, the report says the demonisation of Muslims in the country was in full swing. The process was a continuation of the media’s characterisation of the anti-CAA protestors as anti-nationals, the report states.

Ever since the CAA was passed in December last year and the Narendra Modi-led government indicated that the two other impending countrywide exercises such as the National Register of Citizens (NRC) and the National Population Register (NPR) will also be conducted nationwide, there have been protests across India.

In Karnataka, several individuals and civil liberties movement had intensified their protests against these laws. In Bangalore alone, several hundred protests were organised by students and civil society members. Amulya Leona, a 19-year-old undergraduate student, was one such person who was actively participating in these protests and was at the forefront of organising and mobilising people.

The media, however, painted a disturbing picture of her, condemned her as an “anti-national”. The report says, “In the case of Amulya Leone, the defaming was extensive. Not only were reports published/broadcast that revealed all personal information putting her life at risk, but the video footage of her father condemning her actions were also repeatedly broadcast.” Her father condemned her after receiving death threats, which was not provided as the context in several of these news reports, the report finds. “Her participation in protests was highlighted as part of a ‘dark’ history she supposedly harboured,” the report states. 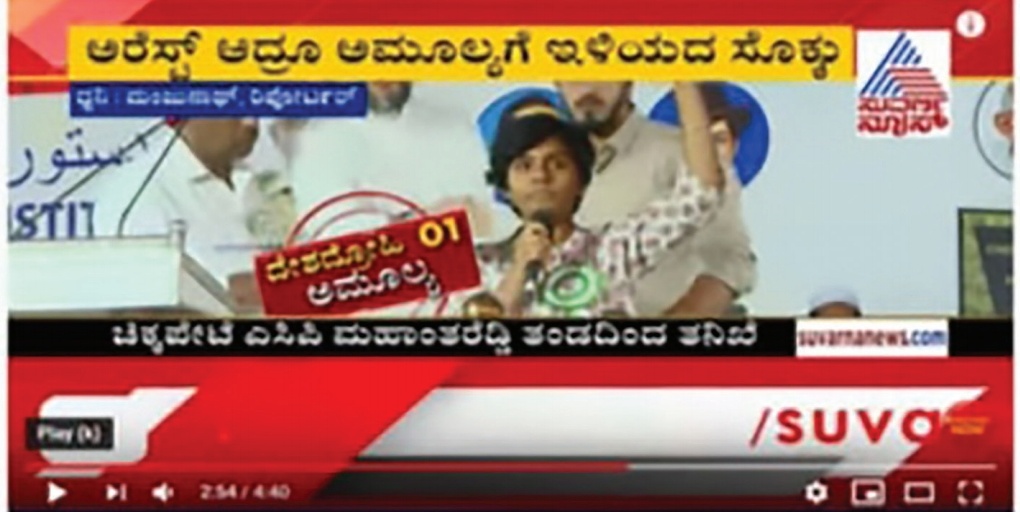 Screenshots of reportage on Amulya Leone, whose face is stamped with a seal that says
‘Deshadrohi’.

Another activist Ardra Narayan who had held a sign saying (both in English and in Kannada), ‘Muslim, Dalit, Kashmir, Trans, Adivasi, freedom, freedom, freedom, now’, was also met with a similar response. News reports on her focused on the presence of the word Kashmir in the title of the placard as well as the accusations against her that she raised the ‘Pakistan Zindabad’ slogan. This was despite the police’s clarification that Ardra had not raised such slogans.

At one point during the broadcast on the channel Public TV, having lost connection with the reporter on call, the anchor says in Kannada: “For many people, a house in Bangalore is what they desire. But here, even with a house, despite having grandfather and grandmother, despite having mother and father, [she has] left her house and staying elsewhere for two years. What is the meaning of this?”

In both these cases, the report states that “Patriarchal, gendered expectations from these two individuals form the premise of the narratives by many anchors.” While Leona was shown as a “daughter who had lost her way”, Narayan’s residence in a PG with friends was speculated as a possible reason for getting into ‘bad company’. 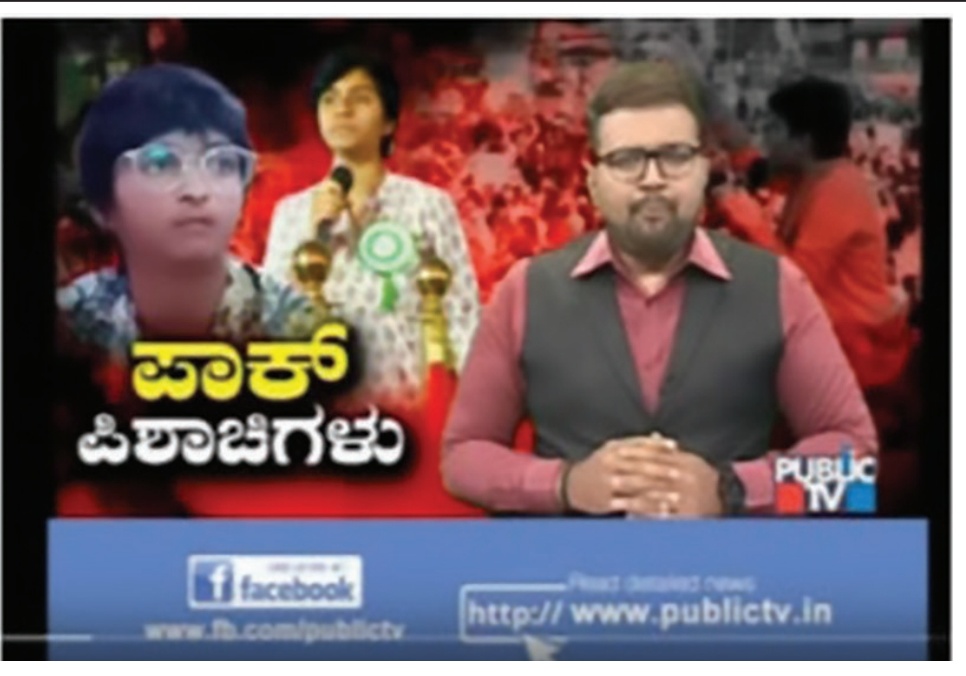 When three Kashmiri students—Aamir Mohiuddin Wani, Basit Aashiq Sofi and Talib Majeed Wani—were arrested in Hubli in February for allegedly recording a “pro-Pakistan video”, Public TV called them “freeloaders” and asked for them to be sent to Pakistan. “These are the real traitors,” the anchor had declared.

The Mysore-based newspaper Star of Mysore was more shocking in its approach. In an editorial titled ‘Bad apples in the basket’, the newspaper demanded the “elimination” of the minority community.

The report refers to an observation made by Preeti Nagaraj in her article for The Wire where she notes, “Today, a majority of the Kannada media is run by companies/persons with great interest in the ideology of the ruling dispensation. This is how fake news or fabricated news finds traction and validity in the mainstream media.”

This online reporting has had offline consequences, the report says. In most cases, the individuals and communities targeted have had difficulty in living in the state and also finding legal aide to defend themselves in case of arrest. In the case of Kashmiri students, the report observes:

“Media coverage of the Hubli incident included tire-burning in protest, open death threats, call for bounty, refusing legal representation, and heckling of any legal representation. Videos of rightwing demonstrators, including those who threatened violence as well as threw boots at the students when they were being transferred to Belagavi were repeatedly relayed.”

The presenters did not question the violence and in fact, there was tacit approval of such behaviour, the report claims.

The report analyses hate speech in two contexts, first the anti-CAA protests and then the emergence of the Tablighi Jamaat COVID-19 cluster. The report has found that vilification and persecution of the Tablighi Jamaat attendees during the pandemic resulted in numerous cases of boycott and physical violence against ordinary Muslims across the country. Suvarna News had gone to an extent of terming the virus as “Tablighi Virus”.

“The Tablighi Jamaat phase saw hate speech directed against one entire community-Muslims-with very visible impact on the ground such as calls for economic and social boycott and physical violence against Muslims. Hate speech in this period was in some instances clear incitement to genocide and sought to reduce Muslims to second class citizenship.”

In most Kannada media, the coverage of the Tablighi Jamaat cluster was saturated with hateful slurs such as ‘shaitan’, and ‘corona criminals’, provocative terms such as ‘Tablighi virus’ and ‘corona jihad’. These terms, the report observes, were amplified through constant graphics and by anchors, guests, and reportage of politicians’ statements.

Also Read: Why Flinging the Term ‘Corona Jihad’ at the Tablighi Jamaat Makes No Sense

Channels and newspapers also gave unbridled access to political leaders to make vile remarks without any accountability. In an interview to Suvarna TV, BJP MP Shobha Karandlaje claimed that the Tablighi Jamaat attendees were involved in ‘corona jihad’; in another media statement, BJP MP Anant Kumar Hegde compared the rapid and fatal spread of COVID-19 with Islam. These accusations were carried as “news reports” and no attempt was made to counter the accusations.

Screenshot of a show on Suvarna News where COVID-19 is termed ‘Tablighi Virus’.

The researchers have also analysed the caste composition of the owners and editors of these media houses and find that most newsrooms continue to be headed by editors belonging to one sub-caste of Brahmins—the Havyakas, a Kannada Brahmin community concentrated in the districts of Dakshina Kannada, Uttara Kannada, Shivamogga, Chikmagalur, Kodagu in Karnataka and Kasargod in Kerala.

This community, journalist and political commentator Shivsundar states, “has traditionally had deep linkages with the RSS and many of the community’s members in media have been espousing its ideology in Kannada media for years.”

The report concludes, “Stereotyping of Muslims as being pro-Islam is common while non-Brahmin non-Hindu male perspectives are treated as deviations from the norm. Reportage of this kind sets a narrative that can be hegemonic, making solidarity across non-mainstream vantage points impossible and leaving them vulnerable to many kinds of violence.”