A Journey to a Past that Will Not Pass 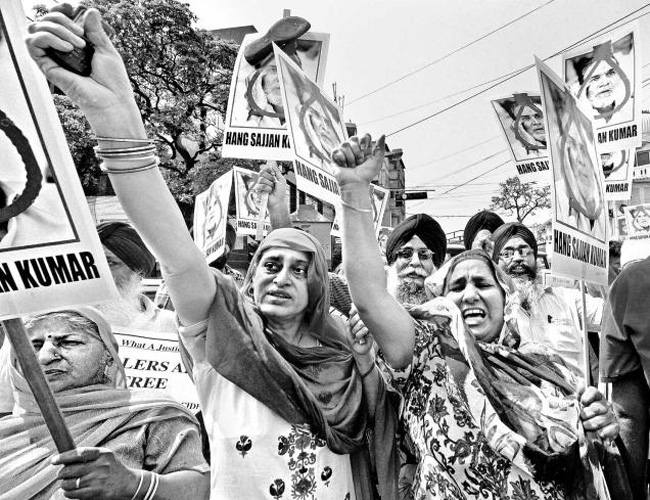 File photo of Sikh women demanding justice for victims of violence against Sikhs in 1984. Credit: PTI

Journalists come across many unusual, even violent situations in their jobs and after a while, it all becomes a blur. I have seen and covered riots and killings and the brutal aftermath of such violence, but some incidents remain seared in the mind, never to go away. I wrote about one particular incident then, almost in a cathartic outburst; more than 30 years later it is still painful to recall.

On October 31, 1984, as news of Indira Gandhi being shot by her Sikh bodyguards spread – the official Indian broadcast media hadn’t yet announced it – I remember even in distant Bombay there was a sense of shock. An assassination of this magnitude had not taken place in India for decades. Many people left work early to get home, fearful of what could happen. I got a call from the international news agency I worked for to ask if I could go to Delhi immediately to help with the coverage.

There was no way to get a plane ticket at such short notice but I went to Bombay Central to see if I could get one for a train. There was one available for the Rajdhani Express the next day – the man at the ticket window said a lot of cancellations had come in suddenly.

The train left, normally enough, in the afternoon but the mood was sombre. News of violence in the north had become known but since Bombay had not been affected, the full extent of the killings had not sunk in.

The train arrived at its second stop, Ratlam, on schedule at 1 a.m. Here, there were announcements that there was “trouble” ahead. Passengers were told they could disembark if they wanted to, but very few did.

The next morning, at around 8.30 a.m., the train made an unscheduled stop at Mathura. There were more announcements, and now a few more passengers got off. At Mathura, some locals on the platform mentioned that Sikhs were being targeted in Delhi and elsewhere.

There were a handful of Sikhs in our chair-car carriage. A teen-age Sikh boy, travelling alone and calmly listening to music on his Walkman, was advised by some passengers to get down; the soldiers on the station would ensure his safety.

He took the advice, but two other Sikhs in declined. One was alone, the other was travelling with his wife, son and daughter.

On the outskirts of New Delhi, the train stopped again at a small station, Tughlakabad. This time the announcement said that passengers should lock all doors and keep all windows curtained.

A few minutes later, it became clear why the announcement had been made. Scores of young men began beating against the train with iron roads and stones. The windows of the train did not break immediately; there was a crunching sound, a cheer and within seconds a few stick wielding youths came into the bogie. One looked at me, as if to gauge whether my beard meant I was a Sikh. It was a chilling look and even though he seemed satisfied I wasn’t one, it frightened me. They began shouting for all Sikhs to come out. Some of the other passengers tried to ward off the boys by saying there were no Sikhs left in the bogie any more, that they had all got off.

A few more young men from the mob outside entered the car, this time with iron rods. Outside, on the platform, was a pile of rubber tires. One shouted: “Here, we have got one of them.” There were sounds of a scuffle, a series of blows; I couldn’t see anything through the crowd. Two girls travelling with their mother screamed. No one else reacted; they just looked on, silently, cowed into submission by the frenzied and armed young men.

The group was pulling a Sikh man by his long hair, while others were hitting him with rods. His shirt was bloodied and he held on to his seat, his grip weakening with each blow. A girl screamed and one of the mob looked at her soothingly and said: “Don’t worry, sister. We will not do anything to you. We are after them. They are killing our womenfolk. We will not spare them.”

The old man couldn’t hold any longer. He was wounded and taken outside. From the glazed and dirty windows, we could only see a heaving scrum. No one got down onto the platform. After a little while, an acrid smell came into the car. The crowd moved back and we saw flames. The Sikh was nowhere to be seen through the windows.

None of us spoke. I heard some banging on the toilet and it slowly opened – a terrified Sikh man came out with his young son. They had shut themselves inside. Someone advised them to cut their hair and beard. The old man hesitated, then took the pair of scissors someone offered. When they re-emerged, the long hair and beard were gone; his son was wearing a cap. Some passengers were softly crying, others were too numb to react.

After a three-hour long wait in the train, much of it without lights, the train began moving. A few passengers who had been waiting at the station got on. They told us similar stories of violence against Sikhs. Delhi had seen unbridled violence for almost two days. At Delhi station, there were no cabs or autos to take passengers. Along with others, all equally traumatised, I began walking on the quiet, empty streets under a hot November sun.