Several neighbourhoods are refusing to buy milk from the community and alleging that they are carriers of COVID-19, though there has been no positive case. 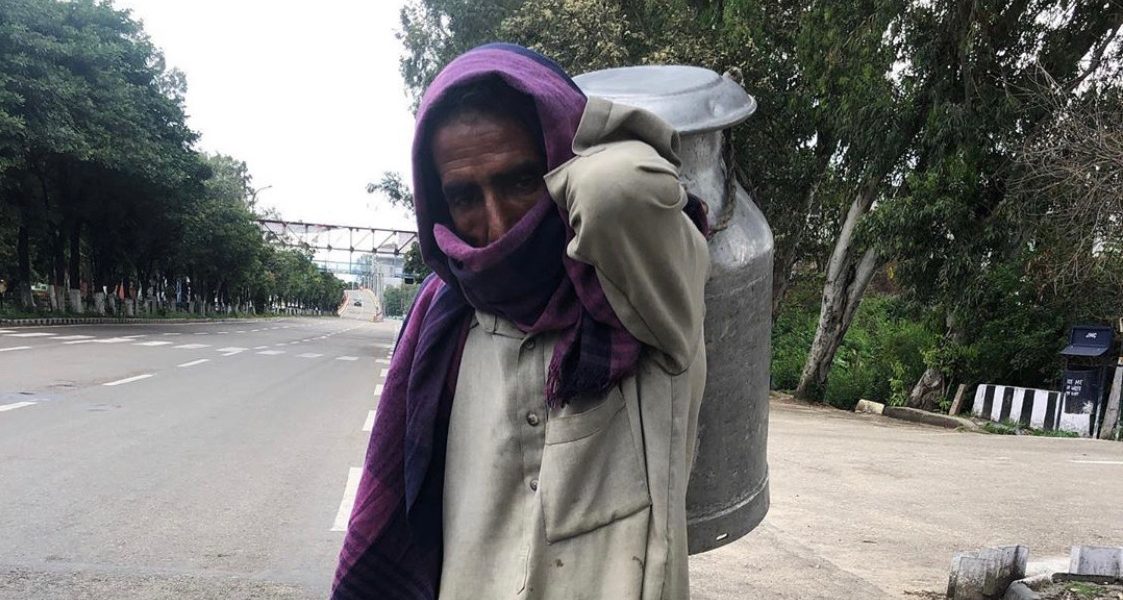 Mohammad Qasim with his milk can in Jammu city. Photo: Pallavi Sareen

Jammu: Mohammad Qasim would travel from R.S. Pura to Jammu city – nearly 34 kilometres – early in the morning, covering his face with a scarf, to supply milk to 40-50 households even amidst the lockdown. After his milk can emptied, he walked back to R.S. Pura, tired but satisfied that he was able to put food on his family’s table.

About a week into the lockdown, however, videos appeared on social media showing two Gujjars, on a bike, being stopped and beaten by the Jammu and Kashmir police for violating lockdown orders.

Advocate Shah Mohammad Choudhary said that the video is from Kathua and condemned the police action, saying, “We are a democracy and we are governed by the rule of law. If they have violated the lockdown, they can register an FIR, produce a challan and produce it in a court of law. Beating is not an option.”

A few more days passed by before the Dodhi Gujjar community approached their leaders with tales of boycott and hate propaganda.

“They say that people are not buying milk or other milk products from them since rumours are going on that the milk that these Gujjars are supplying is infected. I have information that in Vijaypur area, which falls in Samba district, in R.S. Pura and in some other areas, people have made announcements that no one should buy milk from them,” said Shah Mohammad.

“Rumour-mongering is happening all around. People are aware that there is no problem with the Dodhi Gujjars, yet they are being associated with the Tablighi Jamaat,” said Jameel Choudhary, president of the Dodhi Gujjar community.

Both Shah Mohammad and Jameel said that so far, not even one Dodhi Gujjar has tested positive for the novel coronavirus or been admitted to a hospital.

“Gujjar-Bakkarwals do not have time to go to Delhi or any other Tablighi meet because they are catering to their cattle all day. A majority of the sect follows Sufism, so I do not think that they have any association with the Jamaat,” said Shah Mohammad.

Jameel said the boycott was a result of “malicious propaganda”. “Maximum supply [of milk] in the city comes from Dodhi Gujjars, and people have been drinking that for ages. If they don’t drink the milk supplied by us, what will they drink?”

Instead of caving in to the social boycott, Dodhi Gujjars decided to supply milk free at quarantine centres in Samba, Jammu and Kathua districts, in coordination with the district administrations.

Jameel said, “I have talked in detail with the divisional commissioner and I have conveyed that we will be providing free milk to all the quarantine centres. The administration will inform us of the requirement in a particular quarantine centre and we will ensure the supply.”

But the boycott is hurting the Gujjars economically.

“We have quintals worth of milk, but consumption has become difficult. We are telling villagers to buy milk but due to the hate propaganda, they are neither buying the milk nor giving us fodder for our cattle,” said Fareed Ahmed, a Dodhi Gujjar.

But instead, according to Jameel, they have taken this opportunity to stand firm and strong with the government in fighting this pandemic by ensuring that the people who are quarantined at least get good milk supply.

He said, “We can tolerate everything that happens because our hearts are big.”

Authorities have not yet issued advisories or taken measures to safeguard the interests of the Gujjar community, Shah lamented.

He stated that though there used to be a Milk Federation in J&K, currently there was no such cooperative society that could procure the milk from these Dodhi Gujjars or other communities.

He urged the government to figure out logistics to safely procure milk from Joda Farm, Chinore Farm or other areas where Dodhi Gujjars or Jatts are producing milk in large quantities. He said, “If there are apprehensions of them being coronavirus carriers, then testing should be done instead of making them unnecessarily suffer.”

Another grave issue faced by the Dodhi Gujjars is the scarcity of fodder during the lockdown. Most of them are based in Marh, R.S. Pura, Bishnah, Akhnoor and a few other areas near the border. The fodder for their cattle has to be transported from Punjab.

Shah said, “The fodder that they had is nearly finished and though the district administration allowed some trucks from Punjab to pass, they never reached these border areas since the fodder was consumed in Narwal, Sidhra and Bathindi. But the problem is that the milk is not even selling at a price of Rs 10-20 per kg and the fodder, in turn, is expensive.”

The logic of the matter, says Shah is quite incomprehensible. “If a shopkeeper buys milk from the same Gujjar and makes cheese out of it and sells it in the market, then no one has a problem buying it. But if the Gujjar himself is selling it then no one buys it and says that he is infected.”

Leaders of the Jammu Kashmir Tribal United Forum, an organisation that works for the rights of Gujjar and Bakkarwal tribes, has also demanded emergency relief of Rs 7,000 per month to each nomadic and BPL household during the lockdown.

The Samba Police have come forward to resolve the issues faced by milk sellers in Vijaypur, Samba and Ghagwal areas, especially the nomads whose main livelihood source was impacted due to the ongoing lockdown.

Due to the difficulties they faced in selling milk, sales were affected badly and the vendors were facing a hard time getting fodder for their livestock.

Samba Police, after discussing the matter with Jammu-based Milk Plants, has sorted out their problems and Surya Milk Plant, Jammu has agreed to buy the milk from the sellers in the Vijaypur, Samba and Ghagwal areas.

It has agreed to buy large quantity of milk, especially during the lockdown period. This has come as relief to the Dodhi Gujjars in the district.