The NDMC has asked the Delhi Police to provide at least 400 personnel to maintain law and order during the drive. 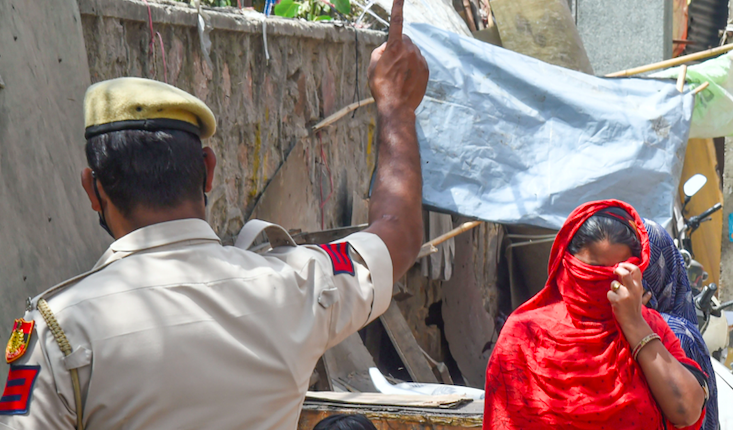 New Delhi: The Delhi Police has slapped the stringent National Security Act (NSA) on five persons arrested in connection with the April 16 Jahangirpuri violence. Meanwhile, the Bharatiya Janata Party-ruled North Delhi Municipal Corporation has scheduled an “anti-encroachment drive” for April 20, today, in the same area where the violence took place.

On the evening of Saturday, April 16, communal violence broke out in the north Delhi neighbourhood after a Hindutva procession allegedly attempted to wave a saffron flag in front of a local mosque. According to police, there was stone-pelting and arson during the clashes and some vehicles were also torched.

By Sunday evening, the police had arrested 22 people for the violence – all Muslims. Some Hindu men have been arrested since then, reports said.

According to police, by April 19, 25 people were arrested and two juveniles apprehended in connection with the clashes.

Police said that among those booked under the NSA are Ansar, the alleged “main conspirator” behind the violence, and Sonu, who was seen in a video opening fire during the clashes. The NSA allows police to detain alleged suspects without any charge for a year.

The other three are Salim, Dilshad and Ahir who are facing charges under the NSA for their alleged involvement in the violence, they said.

Delhi’s ruling party, Aam Aadmi Party, said on Tuesday that the 35-year-old Mohammad Ansar has been a “BJP leader”.

Police on Tuesday said that a man named “Gulli” has been arrested for allegedly supplying a pistol to an accused of the Jahangirpuri violence. Besides Gulli, one Dilshad has also been arrested in the case. They are both residents of Jahangirpuri.

Videos on social media have shown people brandishing swords in the procession.

The ‘s NDMC “anti-encroachment drive” over two days, Wednesday and Thursday, in Jahangirpuri, bears resonance with similar drives in Madhya Pradesh, Uttar Pradesh and Gujarat, in which buildings of those named as accused have been demolished by administration.

The NDMC has asked the Delhi Police to provide at least 400 personnel to maintain law and order.

Delhi BJP chief Adesh Gupta on Tuesday wrote to the NDMC mayor to identify the illegal constructions of “rioters” in Jahangirpuri and demolish it using bulldozers.

The copy of the letter was also sent to commissioner of the municipal body.

The north civic body in a letter to the Northwest deputy commissioner of police (DCP) said that a special joint encroachment removal action programme, comprising the public works department, police, works department, health and sanitation department, veterinary department and enforcement cell of the NDMC has been scheduled in Jahangirpuri.

“You (police) are therefore requested to provide at least 400 police personnel including lady police/outer force for maintaining law and order during the encroachment removal action on April 20 or April 21 (9.30 am onwards) as per your convenience for three days,” the assistant commissioner, NDMC civil lines zone, said in the letter to the DCP.

In a video message on Twitter, Okhla MLA Amanatullah Khan said demolition of the houses of a particular community just to harass them in the holy month of Ramadan on the pretext of an anti-encroachment drive will further spoil the atmosphere in the area.

He appealed to the home minister and the BJP leaders to refrain from resorting to such action, cautioning that the country’s atmosphere has already been vitiated.

Such cheap politics will ruin the country if not stopped in time, Khan, also the Delhi Waqf Board chairman, said.