Kolkata: Beginning with the vandalism of a Durga puja pandal in Comilla on October 13 following allegations of deliberate insult to the Quran by Hindus at a puja pandal, a charge that has since been found to be untrue by the Bangladesh authorities, a series of attacks on Hindu temples, Durga puja pandals and Hindu households have been reported from different parts of Bangladesh over the next six days.

Several prominent personalities and leading intellectuals, including those from the Muslim community, have protested the anti-Hindu violence. Civil society members since have been staging massive demonstrations on the streets of Dhaka against the persecution of religious minorities. Yet, Bangladesh remains tense.

The Wire spoke to Gobinda Chandra Pramanik, a Dhaka-based advocate and Hindu leader who serves as the secretary general of Bangladesh Jatiyo Hindu Mahajote, over phone, to learn about attacks on Bangladesh’s Hindu minority. Pramanik had also served as the head of the Bangladesh unit of Vishwa Hindu Parishad (VHP), an organisation affiliated to the Rashtriya Swayamsevak Sangh (RSS), during 2017-18.

Tell us how the series of violent attacks began and unfolded.

The Nanua Dighir Par area in Comilla where the first incident happened is a Hindu minority area. The Durga puja that takes place there happens with the support of the local Muslims – financial, logistical and moral support. Since it’s a Hindu minority area, organisers do not spend the whole night at the pandal. After the puja ends at night, the idol is covered and everybody goes home.

Sometime past midnight on October 12, or in the wee hours of October 13, someone put a Quran near the feet of a Hanuman statue that was installed at the pandal compound. Even before the puja organisers reached the pandal in the morning, someone had taken photos and informed the police. But when the officer-in-charge came to remove the Quran, the police allowed a local resident to go live on social media and give a commentary of the event.

He irresponsibly blamed the Hindus for deliberately insulting the Quran. It was this live video on Facebook that triggered the communal unrest, with a crowd coming down to attack and vandalise the pandal soon after.

What was the role of the police and the civil administration?

They had no role at all! Every year, the government deputes policemen for the protection of Durga puja pandals. But no such force deployment has happened this year and the police have only paid visits occasionally. All puja pandals had a list of contact numbers of police officers and magistrates displayed in the public for contacting in the case of an emergency. People called these numbers repeatedly but got no help. The police kept dilly dallying using various excuses.

The vandalism started at about 10 am on October 13 and the police entered the scene only after 4 pm. By that time, not only the said pandal but also a number of temples in the nearby areas had come under attack. What’s worse is that, in the absence of the police, when some local residents, including Hindus and Muslims, tried to put up a resistance against the vandalism, the police on their arrival beat up these very people instead of the vandals.

What was the role of the leaders of the ruling party, the Awami League?

Some of them were mute spectators as the violence unfolded, and others were complicit. In most incidents of violence against the Hindu minority in Bangladesh during the past few years, Awami League leaders of various ranks have been found to have a role, and this is one of the reasons that the administration has dealt with those cases softly and perpetrators have been often allowed to go scot-free. This is one of the reasons that communal and fundamentalist elements do not fear the government while attacking Hindus, or any other minority for that matter.

What happened after the Comilla violence?

Violence spread to Hajipur by October 13 evening. Several houses of Hindus were vandalised, women assaulted, their jewelry robbed. The next day, violence spread to Noakhali, where an ISKCON temple was attacked and a sadhus and a devotee were killed. The ISKCON authorities had requested the police since morning for protecting them, as they feared an attack. But the tragedy could not be avoided as the police did not heed to their pleas.

Overall, about a dozen temples were attacked in Noakhali, and about 20 business establishments owned by Hindus were vandalised and looted. On October 15, violence spread to the districts of Feni, Narail, Kurigram, Gazipur, Sylhet and Chapainawabganj where Hindus’ houses, temples and Durga puja pandals were vandalised. The very next day, it was the turn of Hindus in Khulna to bear the brunt and on October 17 as many as 46 houses, along with Durga pandals, were gutted at Rangpur. 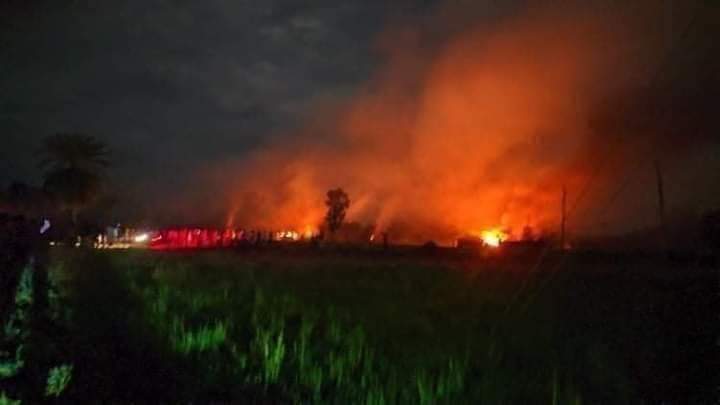 Arson and vandalism in Rangpur, Bangladesh, when Hindus were targeted during Durga Puja. Photo: By arrangement.

The Noakhali incident and the Rangpur violence seemed to have created significant pressure on the Bangladesh government, with the likes of former cricket captain Mashrafe Mortaza, actors Jaya Ahsan and Rafiath Rashid Mithila expressing shock and concern. The Bangladesh government has also transferred several police officers and made arrests. Did the situation improve thereafter?

Not much. Even on October 18-19, attacks in Hindu localities took place in Satkhira and Gaibandha, respectively.

Do you think the recent incidents of alleged persecution of Muslims in India had an impact on these attacks on the Hindus in Bangladesh?

Sheikh Hasina had hinted at this possibility in her address. She even gave India a veiled warning that injustice against Muslims in India could endanger the Hindus in Bangladesh. But I do not see this as an acceptable explanation. It is true that a strong campaign is going on in Bangladesh highlighting alleged atrocities on Muslims in India. But the Bangladesh government, rather than finding excuses to save its face, should have prioritised saving Hindus from becoming repeated victims of communal violence.

The Awami League has long had the reputation of being friendly towards India and enjoyed the electoral support of the Bangladeshi Hindus. Why is it now that Awami League leaders are not standing by the Hindus, rather facing the allegation of being complicit in the persecution of the Hindus?

First, the League has taken Hindu votes for granted. And second, the League’s leaders do not like India’s ruling party, the Bharatiya Janata Party (BJP) and its associated Hindu organisations such as the Rashtriya Swayamsevak Sangh (RSS) and the Vishwa Hindu Parishad (VHP). Besides, Muslim fundamentalist and communal elements have also been part of the League’s ranks. Most League leaders consider the BJP, RSS and the VHP to be terrorist organisations. In recent times, their repeated bashing of the BJP and RSS has also contributed to the growth of communal hatred against Hindus in Bangladesh.

There is a video clip going viral on social media that shows you delivering an indoor speech, espousing the restoration of Akhand Bharat (undivided India), which is essentially an RSS project, and expressing hopes that the BJP government in India returns to power time and again. What would you say about this?

When you are under the threat of persecution for years after years, it impacts the psychology of the persecuted. Therefore, strong words are sometimes needed to be used to boost the morale of the persecuted. The same is the story of the minority Hindus in Bangladesh. Can Gobinda Pramanik restore Akhand Bharat? It’s absurd. But certain things are required to be said in difficult times.

I said it to convince Hindus that they should not leave Bangladesh for India under any kind of threat and persecution. It’s our land also and we have to hold on to it. The Muslims also talk of Ghazwa-e-Hind, which is about capturing the entire land from western Afghanistan to Bangladesh. That is also Akhand Bharat. Muslims in Bangladesh regularly talk of hoisting the Islamic flag atop Lal Quila in New Delhi. You have to look at my speech from this perspective. 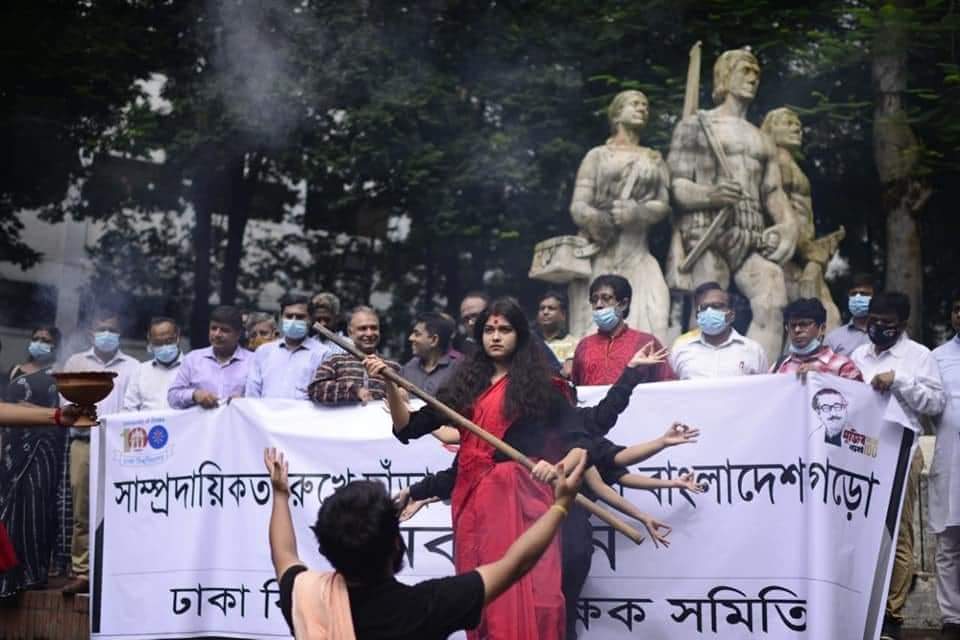 The Awami League MP from Comilla, AKM Bahauddin, has demanded your arrest alleging that you are creating provocation all over the country.

As an elected public representative, it was his responsibility to stop the violence from spreading. He is so influential that even the opposition parties, the Bangladesh Nationalist Party (BNP) and the Jamaat-e-Islami Bangladesh, failed to take up any protests in his area. And he could not stop this violence? It’s farcical that he would now be demanding my arrest for highlighting the truth.

Are you happy with the role of the Indian government?

On the contrary, the Hindus of Bangladesh are deeply upset with the role of India. While Hasina gave India a veiled warning, India did not condemn the incidents of violence or give any stern message to the Bangladesh administration. Instead, India’s foreign ministry statement was sugarcoated and it congratulated the Hasina government for taking appropriate actions. Even the United Nations issued a strong statement and so did Amnesty International. But India’s role, its stark silence, has been most upsetting.

Did the Hindu organisations of Bangladesh take up the matter with the government of India?

We have in the past urged the leaders of the BJP, the RSS and the VHP repeatedly to raise the issue of the protection of Hindus with the government of Bangladesh but of no help. We discussed the issue with several senior leaders, including Ram Madhav (senior RSS leader). Only (late foreign minister) Sushma Swaraj was empathetic towards our cause. None else. They don’t want to upset Bangladesh for some reason that we fail to understand.

So, you have no hope of getting any moral support from India?

It felt good to see that BJP leaders from West Bengal, including Dilip Ghosh and Suvendu Adhikari, raised the matter and that the RSS organised a deputation at the Bangladesh deputy high commission office in Kolkata. But we have no expectations left from the government of India.

You are praising Dilip Ghosh and Suvendu Adhikari, but both of them have been accused of spreading hatred against Muslims in West Bengal.

They may have said a few things against the infiltrators from Bangladesh and things like ‘Love Jihad’, but they only gave speeches, they did not engineer destruction of mosques.