The group projected several hate-filled videos made by the far-right priest and his disciples on the wall of the Peace Palace at the Hague on International Human Rights Day to raise global awareness of the Hindutva ecosystem and its virulence. 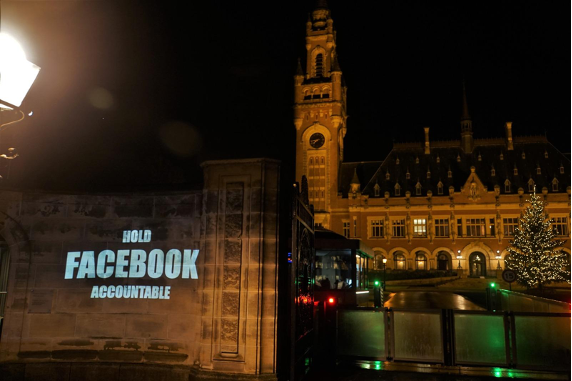 Projection on the wall of the Peace Palace in the Hague. Photo: Video screengrab

New Delhi: On December 10, 2021, activists from The London Story, an Indian diaspora-led non-profit rights foundation in the Netherlands, projected violent videos featuring the newly-appointed controversial Mahamandleshwar of the Juna Akhara, Yati Narsinghanand Saraswati, on the wall of the Peace Palace in the Hague to draw attention to the relentless hate speech by far-right Hindutva leaders in India.

In the video played by the activists, Saraswati was seen exhorting genocidal violence against Muslims. “I want to exterminate all Muslims and eradicate Islam from the face of the earth,” he said. This provocative video of Narsinghanand had been posted on Facebook in October 2019. Since then, it has been viewed 32 million times.

The video projected on the Peace Palace at the Hague also included clips from a video of child assault by one of Narsinghanand’s disciples. In March 2021, a video of a 14-year-old Muslim boy being brutally assaulted for ‘trespassing’ in the Shiv Shakti Dham Dasna temple in Ghaziabad, Uttar Pradesh, had gone viral. Later, Narsinghanand, the head priest of the temple, had claimed that the boy was a ‘jihadi’ and a thief who had entered the temple to defile the idols and harass Hindu women. Shringi Nandan Yadav, the man accused of assaulting the boy, was not only praised by Narsinghanand but justified his actions in online interviews. The Wire has extensively covered how young men like Yadav have routinely committed violence against Muslims after being linked to Narsinghanand.

Also read: My Encounter With Yati Narsinghanand Saraswati and What it Taught Me About Hindutva

An activist associated with the campaign at the Hague told The Wire: “We want to fix the accountability of the Indian government and big tech companies like Facebook who consistently fail to take action against hate speech and instead provide a megaphone and breeding ground to hate preachers and hateful ecosystems.”

The statement issued by The London Story, a copy of which was accessed by The Wire, alleged that the Indian government provides political patronage to hardliners like Narsinghanand and his disciples to stoke anti-Muslim violence.

“…due to his political affinity with the Indian Prime Minister Narendra Modi’s party leaders and party workers, Yati Narsingh Anand (sic) has not faced any legal repercussions for his dehumanisation and incitement to violence against Indian Muslims,” the statement said.

On two occasions earlier this year, the National Commission for Women had ordered the Uttar Pradesh police to arrest Narsinghanand, but in vain. In October 2021, the Ghaziabad police had moved the district magistrate’s office to book Narisinghanand under the Goonda Act, but nothing has come of it so far.

The London Story said that they had reported the videos of Narsinghanand and his disciples to Facebook. However, despite violating Facebook’s policy on hate speech, the videos continue to garner millions of views and potentially fuel communal violence in India.

In February 2021, The Wire had covered Narsinghanand and his Hindutva ecosystem’s role in inciting anti-Muslim violence in the run-up to the deadly riots in Northeast Delhi.

The group blamed Facebook for platforming and amplifying dangerous speech. In fact, despite several complaints filed in India against Narsinghanand and his disciples’ videos, Facebook continues to amplify their dangerous speech, the diaspora group alleged.

The London Story’s investigations have shown that Facebook in India is a virtual “lynch square”, with a complete lack of human oversight regarding the content that is posted and goes viral on the platform. The foundation’s statement said: “It is critical that, on Human Rights Day (November 10), tech behemoths like Facebook are held accountable alongside state leaders for failing to protect the human rights and dignity of minorities around the world.”

Of late, several human rights groups and whistleblowers from Facebook itself have accused the company of not taking action against hate speech by right-wing groups and leaders of the ruling party on the social media platform.

In November 2020, former Facebook employee Mark S. Luckie had testified before a Delhi government panel about Facebook’s role in the large-scale sectarian violence that had erupted in Delhi during the assembly elections earlier that year.

Luckie had claimed before the panel that despite several reports from users about hateful content, Facebook had failed to take action. He had pointed out that, in addition to having the capacity to remove or delete content, Facebook can also interfere with what people see and don’t see by altering its algorithm, which allows certain information to remain online while the rest is removed.

The Wire had reviewed some leaked internal reports from the social media giant which showed that Facebook had seen spikes in hate speech in India after the Citizenship (Amendment) Act protests in early 2020 and during the first COVID-19 lockdown.

A year earlier, an internal review meeting at Facebook had noted that India had a ‘comparatively low prevalence of problem content (hate speech)’, but by 2020, ‘inflammatory prevalence’ had shot up by over 300%.

Last year, Ankhi Das, a top Facebook India official, had come under public scrutiny for her alleged refusal to act against hate speeches posted by politicians from the ruling Bharatiya Janata Party.