At least 60% of the participants surveyed said they have come across content on digital platforms that incites violence against Muslims, the report found. 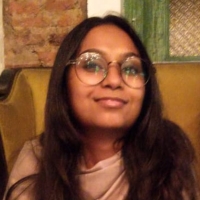 New Delhi: Digital platforms such as Twitter, Facebook, WhatsApp, Reddit, and GitHub have hastened the proliferation of anti-Muslim hate that forms the architecture of Hindutva crimes in India, the Culture-Centered Approach to Research and Evaluation (CARE) has said in its report.

At least 60% of the participants surveyed said they have come across content on digital platforms that incites violence against Muslims, the report titled Experiences of Muslims in India on Digital Platforms With Anti-Muslim Hate found.

The report – which involved in-depth interviews of Muslims and 213 hours of online participant observations on digital platforms – said that the digital infrastructure of Hindutva is organised around building disinformation and accelerating the circulation of hate. The data was gathered between November and December 2021.

CARE found that while 40% of the participants surveyed said that over the last year they had been called offensive names as a result of being a Muslim, 60% of the respondents reported coming across content on digital platforms stating Muslim immigrants will take over India.

It is worth noting that the period when the survey was conducted, and particularly the month of December, registered unprecedented levels of hate on digital platforms.

The report further said the narratives of hate are often centred on specific events and policy decisions made by the ruling Bharatiya Janata Party (BJP), and dissenting responses to Hindutva.

The report is released at a time when hate speech against Muslims in India has gained momentum, with several rightwing and Hindutva leaders calling for a Muslim ‘genocide’ amidst little to no backlash from the government. Many such militant rightwing leaders have direct connections with BJP. Additionally, it also comes against the backdrop of several other reports highlighting the lack of moderation policies by social media platforms against hate speech.

The Citizenship (Amendment) Act (CAA) became law on December 11, 2019, when the Upper House passed the Bill and the president gave his assent. Provocative speeches on social media followed, and in February, riots broke out in the national capital, which killed as many as 53 people, causing enormous damage, mostly to Muslims.

In 2019-2020, Facebook’s data scientists found that there were big spikes in the prevalence of inflammatory content in three languages – English, Hindi and Bengali – that coincided with the start of the CAA protests and the start of the first COVID-19 pandemic lockdown in India, The Wire had reported.

Between December 17 and 19, 2021, right-wing activists, hardline fundamentalist militants and Hindutva organisations came together at Haridwar for an event called the ‘Dharma Sansad’ or ‘religious parliament’. Over the course of three days, this event witnessed an extraordinary outpouring of hate speech, call for mobilisations to kill Muslims and other anti-Muslim sentiment.

BJP leader Ashwini Upadhyay, who attended the Dharma Sansad, has previously been arrested for an event he helped organise in Delhi’s Jantar Mantar where slogans were raised, calling for violence against Muslims. Another similar event, calling for Hindutva members to ‘kill and be killed’ to make India a Hindu Rashtra, was organised in the national capital too.

A few days later, on January 1, 2022, prominent Muslim women were put up for ‘sale’ on an app on GitHub.

The CARE survey found that 64% of the respondents reported coming across content on digital platforms that blamed Muslims for the pandemic.

The framing of questions around intentions of the Tablighi Jamaat gathering in Delhi held prior to the announcement of lockdown fuelled misinformation around Muslims’ plots to infect Hindus by spitting on food, and infiltrating respectable middle class spaces through their everyday jobs. The #CoronaJihad narrative projected the Muslim as a terrorist attacking Hindu communities with the COVID-19 bomb.

The survey asked the participants whether they agreed to this statement : “I have come across content on Facebook, Twitter, and WhatsApp that blames Muslims, suggesting that they are responsible for the spreading of the pandemic.”

Also read: Clubhouse and the Fantasy of Sexual Violence Against Muslim Women

According to the CARE report, the hashtag #LoveJihad is part of a broader global Islamophobic digital infrastructure that flows from far-right, white supremacist, anti-immigrant spaces in Europe to the Islamophobic discursive space in Myanmar, and the anti-Muslim hate in India. The circulation of the #LoveJihad trope has resulted in violence directed at Muslims, including contributing to the genocide in Myanmar. Moreover, the #LoveJihad conspiracy has been legitimised through the policy structures pushed by Hindutva.

The imaginary right-wing conspiracy of ‘love jihad’ claims that Muslim men ‘lure’ Hindu women into wedlock for the purpose of converting them to Islam.

Despite there being no evidence of a Muslim plot to convert Hindu women through marriage, right-wing groups have long been working to prevent interfaith marriages in India. The Special Marriage Act of 1954 provides a clear legal framework for marriages between adults from different religious communities. However, authorities often refuse to register such marriages on frivolous grounds.

Against this backdrop of the ‘love jihad’ conspiracy narrative, digital platforms are rife with content targeting Muslim women with sexual violence. 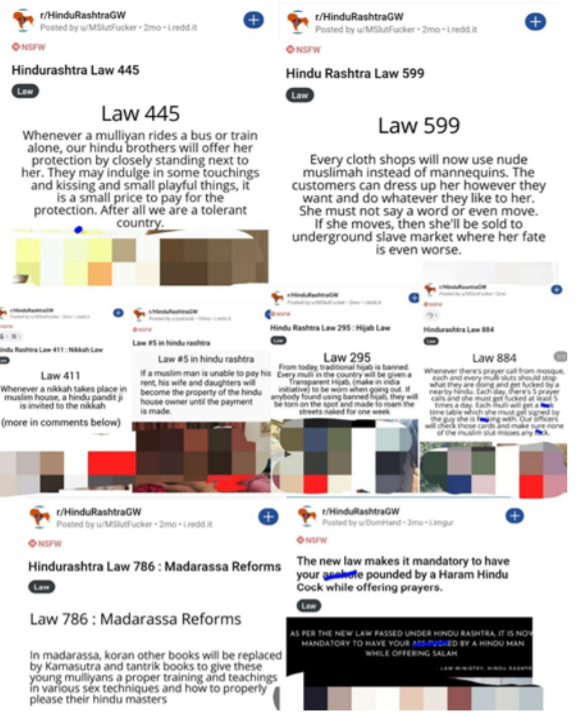 On January 1, ‘Bulli Bai’ app on GitHub targeted Muslim women – including journalists, activists and students – by putting them up for ‘auction’, in a similar fashion to the earlier ‘Sulli Deals’ app. It used images stolen from social media apps to ‘auction’ women, an act that has been compared to “online sexual violence” and promoting “the crimes of trafficking and sexual slavery”.

The threats of sexual violence targeting women are carried out alongside dehumanising content depicting Muslims as animals. Fifty-five percent of the participants surveyed said they have come across content digital platforms that compare Muslims to pigs and dogs.

Students, activists, civil rights groups and even retired service chiefs have called on Prime Minister Narendra Modi to speak out and take action against hate speech.

Note: A reference to The Wire’s Tek Fog findings has been edited out as the stories have now been removed from public view pending the outcome of an internal review, as one of its authors was part of the technical team involved in our now retracted Meta coverage. More details about the Meta stories may be seen here.