In Bijnor, Children Give Harrowing Accounts of Beating by UP Police After CAA Protest

The youngest victim of police brutality is just 13 years old, but the local police chief has brushed aside charges and demanded proof “on video”. 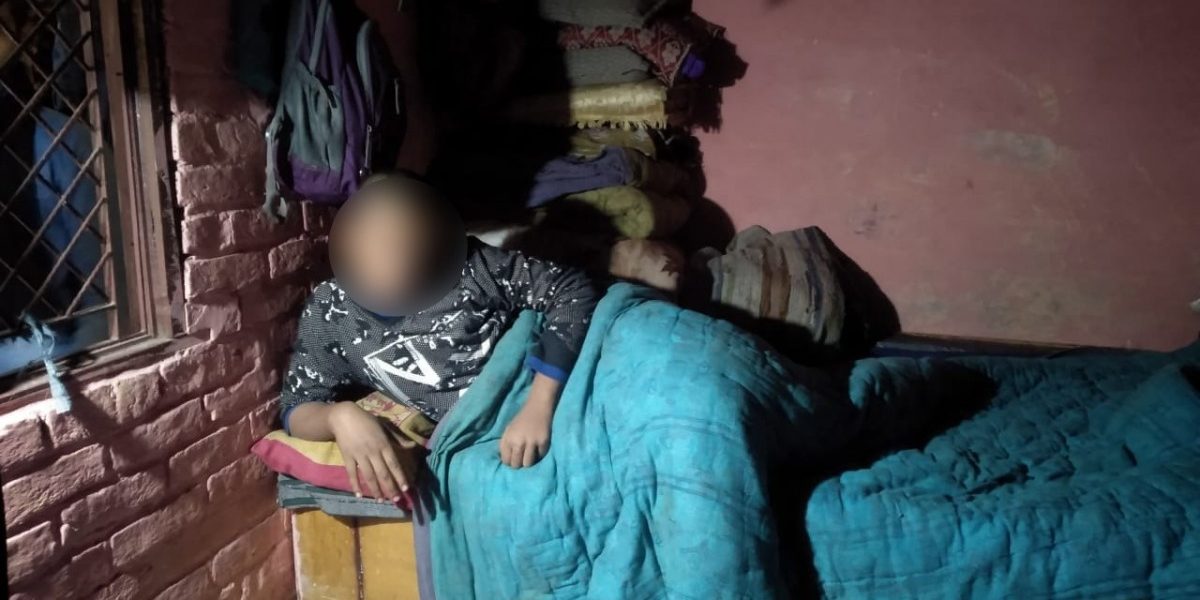 17-year-old Abdul (name changed) was detained and allegedly beaten by the police.

Nagina (UP): In the aftermath of chief minister Adityanath’s exhortation that the Uttar Pradesh police take the “strictest” action against those protesting the Citizenship (Amendment) Act in the state, this small town some 35 km from the district headquarters of Bijnor saw some of the worst instances of police violence with disturbing accounts of children being attacked and brutally beaten.

In Nagina, there is a palpable terror amongst the Muslim residents – who form the vast majority of the population of Bijnor district – following the detention of over a hundred people on the afternoon of Friday, December 20, when a protest was forcibly broken up and then followed by police brutality.

On Friday afternoon, after the namaz in the Jama Masjid, a large crowd had gathered outside the mosque. The previous Friday, a protest march had been planned which the police had given permission for only to withdraw clearance at 10 pm the night before. As a consequence, that protest never took place with the organisers swiftly informing the community about its cancelation. This Friday’s protest was different, however. It was unorganised and much larger, even though there had been no call to action from leaders within the community as before.

According to residents, there were anywhere between 10,000-12,000 people at the mosque that afternoon, a congregation size usually only reached on festive occasions. The crowd that had gathered had come to pray, and after prayers, wanted to walk from the masjid to a town square called Gandhi Murti where protests are usually held. Shahnawaaz, a prominent member of the community and the son of the current nagarpalika chair Tahira Beghum, said that on realising the strength of the crowd, the shahi imam along with the other senior members of the community convinced the vast majority of people to go home peacefully. That left between 200-400 young people still in the streets, who decided they would walk to their destination via the protest site. Gandhi Murti chowk where the protestors did not end up reaching when they left from Maulganj. Photo: The Wire

“They had just got it into their heads that they would reach Gandhi Murti. There was no unified plan, and no organisers,” Saeed, a lawyer who has been working with detainees, told The Wire.

This is where the narratives of the police and protestors begin to differ. The protestors say that a few hundred metres from their destination, the police came into the road and began a lathi charge, triggering chaos. The protestors dispersed, with people trying to run away into the narrow lanes within the area as well as into houses, shops, and ATM booths, with the police starting to catch and detain all of those who were in the area. In all, the police arrested over a hundred people. The youngest person detained was a child of 13.

From there, those detained were taken to Bijnor Police Lines, where they were held in a large hall through the night until they were presented in court the next day 24 hours later.

While they were beaten en route, many of the persons detained – bystanders as well as protestors – said the worst of the brutality took place while they were  in police custody at Bijnor. Policemen have been stationed outside the Nagina mosque. Photo: The Wire

Abdul*, 17, was in bed under a quilt on the freezing afternoon when The Wire’s reporters met him. He and his family insisted on their identity being hidden, torn between wanting the world to know about what happened and trying to keep themselves safe from a police force that was still keenly present in the locality.

At the Bijnor Police Lines, the police offered them water, which they drank. When some of them asked later to be allowed to go to the toilet, the police would take them out and beat them before letting them back in. People soon stopped asking for water, and soiled themselves where they stood.

Abdul showed us visible bruises of lathi marks across his legs. Atifa*, his six-year-old sister came shyly and sat beside us, and on asking her what happened that evening, just said. “They took him away. Ammi was crying.” 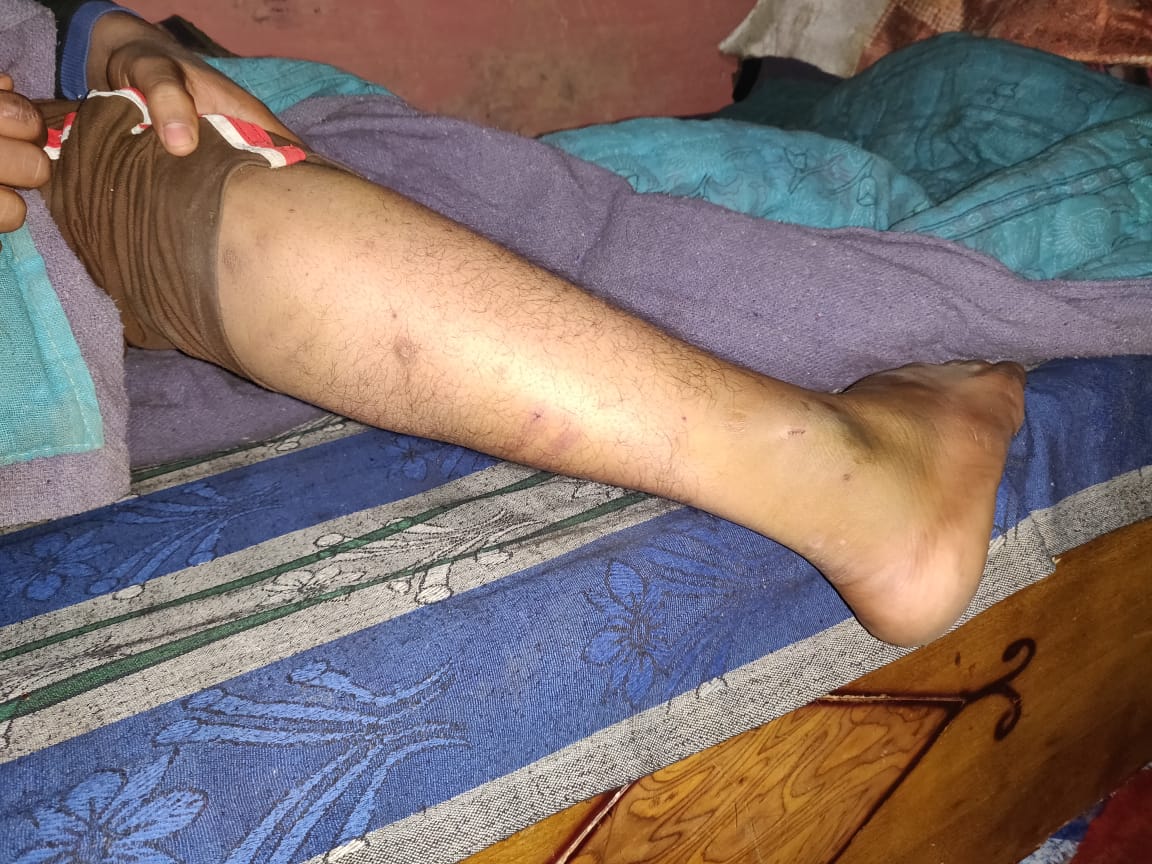 The wounds on Abdul’s leg.

Asim*, another child who was detained,  is only 13. He  has yet to venture outside since the police released him on December 22. When we went to meet him, he was trembling under his quilt while his mother recounted what he had said to her when he returned.

She said that he had told her the police had offered him water, and he had taken it because he was extremely thirsty. When shortly after he had to relieve himself, he was taken outside and brutally beaten.

His older sister, who was sitting in another room, cried out, “They did more than that. He didn’t tell ammi but he told me – two policemen held his arms and held him against a wall and a third one hit him on his back with his lathi. He told me that they shoved his face to the ground with their shoe and pulled his hair, saying that they would pull it out. They had been pulling the beards of the others.” Asim stopped drinking water then so he would not have to go to the bathroom. Water was the first thing he asked for when he reached home two days after being detained.

His sister is helplessly furious, and the only one in the home who has reached the stage of rage; the rest are all still terrified of what could come next. Asim’s uncle says, “Who do we go to? The police are outside our houses, they know where we live.”

Since he came back home, Asim has stopped talking. He does not eat, and does not leave the house. He wakes up at night with nightmares of police beatings, his family members say. When we spoke to him, he refused to let us see his face, terrified of anyone taking pictures which would then lead the police to him. The only thing he does is ask for water.

Some of the relatives of those detained by the police said some of the detainees have found blood in their urine.

The Wire asked if there were CCTV cameras within the Police Lines that we could access, and he said he would have to come back on that at a later time.

When being told that the children had been released and had testified to being beaten while in police custody, he asked whether they had been taken to a private or government hospital.

When we told him that we had seen the evidence of the bruising ourselves, he said, “The crowd was beating everyone, they could have beaten the children as well.” In fact, every witness we spoke to said that nobody was beating anyone from the crowd except the police.

When we told him that the children had said that they had been in the lockup, and had been released, he asked for their names so he could check, and said that this was the first time that he was hearing about it. Tyagi insisted he had not received any allegations of brutality, and so no investigation was taking place. If he got a complaint, he said, a probe would take place.

The Wire has learned that 104 people were detained on Friday, December 20, and that up to 21 minors who were part of this group were released by Sunday night. An FIR has been filed against the remaining 83 people, under 15 different IPC sections including Section 307 – attempt to murder. Tyagi pleaded ignorance about this information. The FIR against 83 detained in Nagina.

Tyagi’s line is that his force stopped a major riot from taking place by acting judiciously and swiftly to contain any violence. However, witnesses say that the only people who were committing violence were the police. Tyagi admits that his force detained whoever was on the street at the time, saying that as per Section 144 – which had been imposed – the presence of people in groups was wilful disobedience that gave cause for them to be detained. Mosque close to the homes of families The Wire visited. Photo: The Wire

The Wire has seen videos of people in the Nagina area where the violence took place, including those identified by local residents as non-Muslims, standing in groups larger than 4, watching as the protestors were being beaten. When asked why all the people detained by the police were Muslim if the protocol was simply that everyone in the area was being picked up, Tyagi deflected the question. He said that police action had prevented communal violence from taking place.

In fact, every family The Wire spoke to has stoutly denied there being any communal sensitivity in the area at all. There was no pushback against the Hindus of the area, just the police.

When asked whether he is happy with the way things have been handled in Nagina and elsewhere in Bijnor, Tyagi said he was. “You do not know what a daunting task it was,” he said, about controlling what he describes as a huge mob.

“Did you go to say this while carrying lathis?” we asked.

On being pressed further, he said, “Yes.”