From the CM blaming Muslims of Bengali origin for population rise to a popular TV serial making thinly-veiled fun of Muslims, Assam's othering of the community has got a new lease of life.

Guwahati: On June 10, an episode of the Assamese serial Beharbari Outpost caught the attention of some Facebook users not for its comedy but for what some said was an attempt to demonise a particular community without naming it.

The episode made an ostensible reference to the prime accused – who were found to be Muslims of East Bengal origin – in recent cases involving raids on drug traffickers and the brutal assault on a doctor in Hojai district of Assam.

Though the serial does not name any community, the prime accused in these cases are referred to as ‘sihote’ in Assamese (‘they’) in a particular Beharbari Outpost episode.

A section of Facebook users found the reference to be one that was clearly pointed at Assamese Muslims of East Bengal origin (locally, and sometimes derogatorily, called ‘Miya’). The Miya community is often held responsible for eroding what is perceived as a pure Assamese cultural fabric by Assamese ethno-nationalist hardliners.

The serial, which airs on Rengoni TV and has been on for more than 2,000 episodes, is on police personnel stationed in the eponymous outpost. Its protagonists comment on Assam’s socio-political, cultural and contemporary scenario through regular gags. It has a huge fan following.

In episode 2054, the police protagonists say the arrests of drug peddlers is an effective and powerful answer to “those who are hellbent on destroying ethnic and indigenous Assamese culture.”

They also comment on the assault case involving an Assamese Hindu doctor by some Muslim people who had alleged negligence.

“First they attack our doctors and now they are infusing drugs among the young generation. They are hatching this conspiracy to annihilate our Assamese culture and ethnicity and are attempting to uproot our indigenous people,” the dialogue runs.

“They are raping our daughters and daughters-in-law. They are making our youths handicapped through drugs. How can we tolerate this? We need to put an end to their nefarious designs. We have to be empowered,” it continues.

Another scene – intended to be a comic one – depicts a policeman telling his senior, “I am creating an atmosphere for an encounter and training him (a colleague) on what to do in such a situation. As they live in slums and listen to loud music, I am creating that atmosphere here.”

Sanjive Narain, the proprietor of the AM Television company which owns Rengoni TV, told The Wire that the serial was fictional work and intended to entertain.

“We do not intend to hurt religious or cultural sentiments. We are not biased or prejudiced against any community. We do not wish to hurt any community or religion. The serial is only people acting in a made-up story. If someone is hurt then we can apologise. There was never any intention to hurt anyone. Time and again we have clarified this for people complaining,” Narain said.

Narain’s words, however, has limited takers.

Aman Wadud, a lawyer at the Gauhati high court said the serial episode was an example of an ongoing spate of hatred towards Muslims and efforts to dehumanise them. “This was started by Bharatiya Janata Party to polarise the electorate. In the process, they have destroyed the social fabric of Assam. What surprises me is that there are no voices being raised against such nauseating hate mongering,” Wadud said.

Jyotirmoy Talukdar, a senior writing fellow at Ashoka University echoes Wadud in noting that there has been no outrage from the “comfortable middle-class” elite on what was shown in the serial.

“Instead, it received support including at least one cartoon drawn in endorsement of the vitriol. A community has been solely targeted and yet, people who certify the existence of a democratic and pristine Assam are conspicuous by their absence. Things will only go downhill from here, and this government will, for sure, not brake gently,” Talukdar said.

A few days ago, a group of Muslim men of East Bengal origin were arrested in the rape and murder of two tribal minor girls in Kokrajhar district.

The incident was severely condemned on social media. A section of users used this incident to claim that heinous crimes were committed by “Bangladeshis in Assam”. “Bangladeshi” is also a pejorative for Assamese Muslims of East Bengal origin.

Mridu Moucham Bora, an Assamese cultural activist from Nagaon district shared a drawing on Facebook. It depicted two characters from Beharbari Outpost with one saying, “They have raped and murdered two of our sisters in Kokrajhar.” 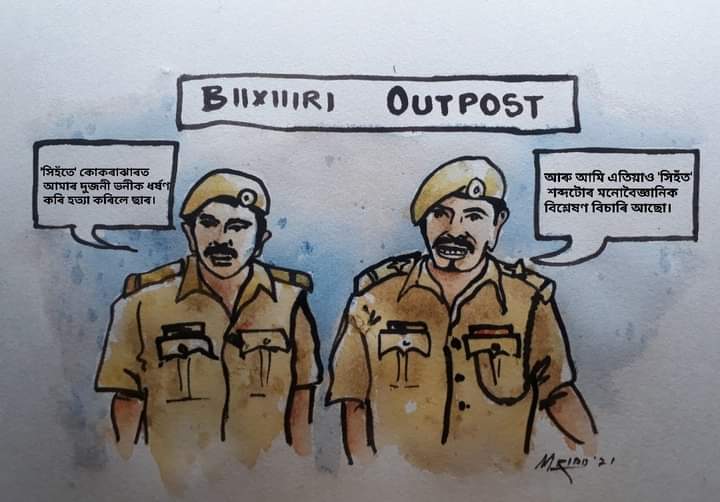 The other character says, “Now we are still searching for a psychological analysis to the word ‘they’.”

In Bora’s drawing of the assault of the Assamese doctor, two skull cap-wearing men are shown beating the doctor with sticks. 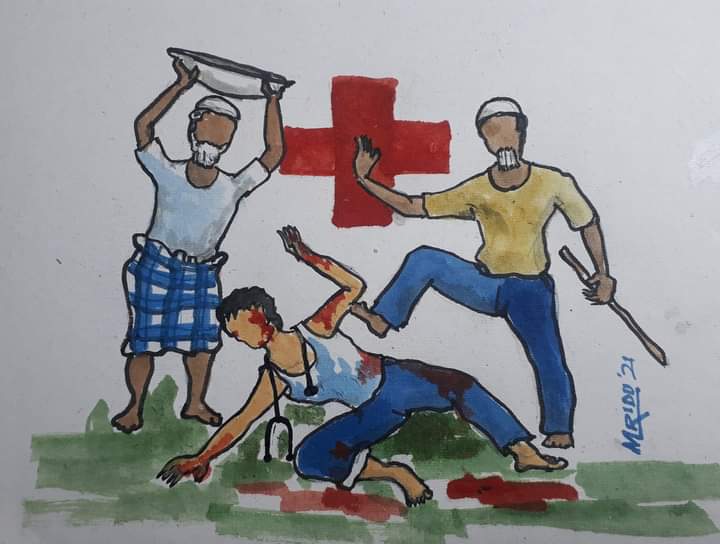 Bora tells The Wire that he is “an apolitical person”. He then says that “communalism” is something for which “that community” is responsible.

“What I have observed is that communalism quickly spreads in that community. We, the Assamese community, do not tend to absorb communal traits, but it is the opposite for them. I deliberately drew the two pictures to highlight the issue. When we question them about the issues, they try to be defensive about it and do not accept that they are to be blamed. I feel that as an Assamese we are in danger,” Bora says.

Notably, he does not mention Muslims by name.

Bora is complemented by BJP leader and new chief minister Himanta Biswa Sarma whose recent statements have only intensified the culture war against that category of Muslims in the state.

Sarma notably tweeted the names of all 22 Muslims accused in the doctor assault case.

Remaining culprits have also been identified

He did the same with the accused in the Kokrajhar incident.

Muzammil Sheikh, Nazibul Sheikh and Farouk Rahman arrested for rape and murder of 2 tribal minor girls in Kokrajhar dist.The heinous crime was allegedly committed with the girls first choked to death & their bodies hanged in a tree to hoodwink. @assampolice did a commendable job.

However, the chief minister did not mention the names of the accused in the Jorhat rape case, who were Hindus.

On June 10, addressing the media to commemorate one month as chief minister, Sarma minced no words to explain that a “population explosion” in Assam will lead to conflicts. “If the population rate of such Muslims is allowed to increase then one day there will be encroachment in and around the hilly areas of the iconic Kamakhya temple,” Sarma said.

On June 7 Sarma visited a temple in Darrang district to inspect lands that were allegedly encroached upon illegally. Prior to that there were eviction drives conducted in Hojai district and a couple of days before Sarma’s temple tour, the local police and district administration removed “encroachers” from around 120 bighas of land assigned to the temple.

Angshuman Choudhury, a researcher at the Institute of Peace and Conflict Studies, says that the dramatic escalation of anti-Muslim, specifically Muslims of Bengali origin, narrative is hardly surprising.

“The ruling party has dialled it up, particularly after its second mandate in May. For decades, this powerful elite had carefully nurtured a middle-class Assamese anxiety around “illegal Bangladeshis” taking over Assam, which slowly permeated all aspects of the public discourse. It even influenced the production of popular culture. The recent Beharbari Outpost episode is only the latest example of this,” Choudhury says.

Othering in Assam has been generational and not limited to Muslims either. Phrases like “Ali, Kuli, Bangali, naak sepeta Nepali” have been said in Assam for a while now.

Over time, with changing regimes, the main ‘other’ has varied while the main binary remains that of the indigenous and foreigner.

As the chief minister’s speech is evidence, the cultural war has also given way to discussions of population control and fertility as a method of justifying the forked vision of ‘them’ and ‘us’.

If one compares the Muslim and Hindu Total Fertility Rate at the district level in Assam during 2001 and 2011, it is observed that the difference has narrowed down significantly from 2.30 to 1.39. The relatively urbanised districts of Tinsukia, Dibrugarh, Sibasagar and Jorhat in Upper Assam exhibit a pattern where TFR among the Muslims is lower compared to the Hindus, whereas in Kamrup Metropolitan, the most urbanised area in the state, the difference is marginal.

On the other, over the census period, the difference between the TFR of both the communities has narrowed down significantly in the state. Contrary to the propaganda arguing for a coercive population policy aimed at the immigrant Muslims in Lower Assam, there appears to be a broader pattern of declining divergence between the Muslim and Hindu fertility patterns in the Muslim majority districts in the state.

Yellow indicates Muslim majority districts and in red are districts where the Muslim TFR is lower than that of Hindus.

The table was calculated with assistance from these sources: 1 and 2.

Thus the hype regarding demographic invasion as the comedy serial suggests is but a part of the perpetual phantasy fed into public imagination in Assam, which is only abated by the ideological construction of the regime in power.

Gorky Chakraborty is with Institute of Development Studies Kolkata.