In 2014, the Sikh Flag Flew at the Red Fort – And the Hindu Rightwing Had No Complaints

The 2014 Fateh Diwas demanded Indians remember and acknowledge Sikhs. It comfortably fed into the Hindu right-wing's claim that Mughals are foreigners who oppressed minorities. 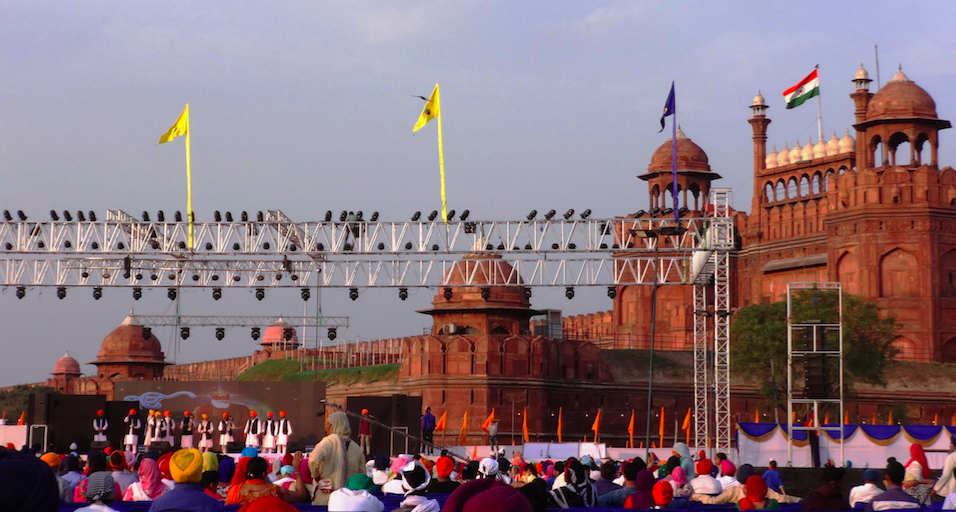 Sikh flags at the Red Fort on the occasion of Fateh Diwas in 2016. Photo: Kanika Singh

The raising of the Sikh flag on the Red Fort by some participants of the tractor march on Republic Day has gained much attention.

The image of the Nishan Sahib on the Red Fort and the Dilli Fateh (conquest of Delhi) has long been part of popular imagination in Punjab, particularly for the Sikh community. As the story goes, the Sikh army led by Baghel Singh, Jassa Singh Ahluwalia and Jassa Singh Ramgarhia, conquered Delhi in the year 1783. They defeated the Mughals, sat on the emperor’s throne and raised the Nishan Sahib on the Red Fort.

They led a victory procession through the streets of Delhi which was joined by Hindus, Muslims and Sikhs as they welcomed the Sikh forces for liberating them from Mughal tyranny. The Sikhs established their domination over Delhi, and Begum Samru and the Mughal emperor had to plead for their throne to be spared. This is a powerful story highlighting the Sikhs’ history of fighting for justice against oppressive rulers and their magnanimity even towards their opponents.

Popular paintings available in Sikh museums, popular literature and social media (for example, here) celebrate this victory of the Sikhs.

Politically, the idea of subduing Delhi’s arrogance has been a powerful motivator in Punjab politics. Through independent India, Akali politics, especially the Shiromani Akalai Dal (Badal), have organised their politics around alleged discrimination of the Central governments (led by the Congress for the longest time) against Punjab and the Sikhs.

Images of Dilli Fateh have been a part of popular visual culture at least since the mid-1970s and it is likely that they appeared in context of Akali challenge to the Emergency imposed by the Congress government at the centre.

It is worthwhile to pay attention to another instance in recent years where this imagery of conquering Delhi came into play and on a spectacular scale. On March 8 and 9, 2014, a grand event called Fateh Diwas (‘day of victory’) was celebrated at the Red Fort in Delhi by the Delhi Sikh Gurdwara Management Committee. This was a massive public function held on the lawns outside the fort, to mark the conquest of Delhi and the unfurling of the Nishan Sahib on the fort by the Sikhs.

The programme included a jarnaili march through the streets of Delhi with a large number of Sikhs on foot, vehicles, horses and elephants. Some were dressed as 18th century Khalsa warriors, others performed gatka (martial exercises with weapons).

The two-day celebrations included the performance of the play Raj Karega Khalsa (The Khalsa Shall Rule), kirtan and langar. The Fateh Diwas was organised for the first time in the year in 2014 subsequently becoming part of DSGMC’s annual celebrations. (see here, here, and here) 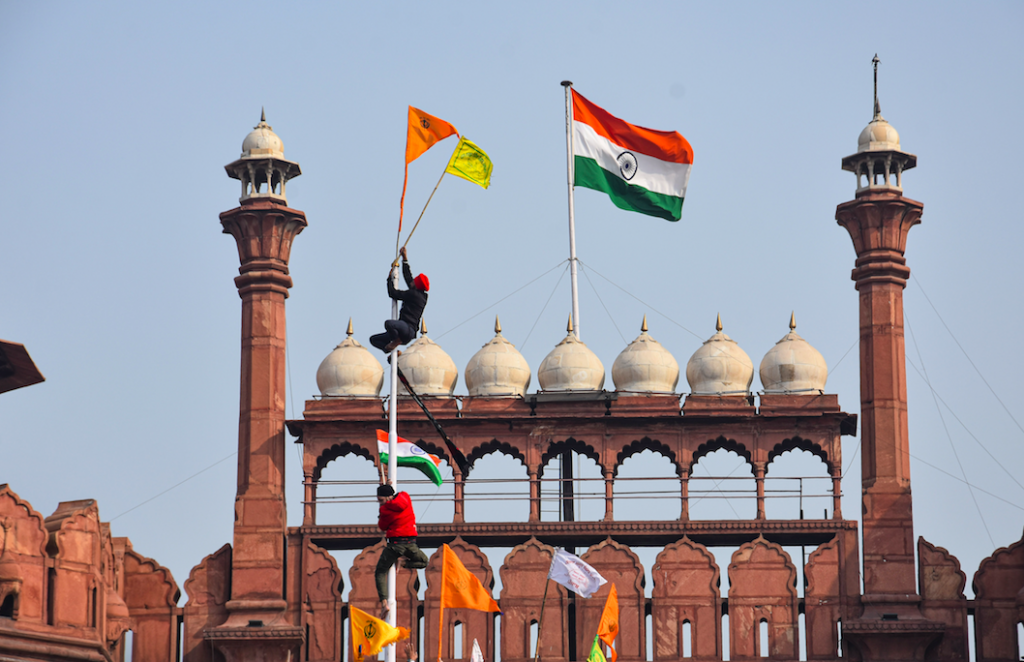 What makes the 2014 event so interesting when the story has been popularly known for years?

One, the first ever Fateh Diwas celebration was entirely at the initiative of SAD (Badal)-run DSGMC. SAD (Badal) wrested the DSGMC from the Congress-led Sarna faction’s long years of control after a bitterly fought election in 2013. In Punjab politics, this victory resonated as a regional political party’s triumph over traditional rivals at the Centre.

Two, the claim of Sikh flag over the Red Fort is a highly symbolic one. The tricolour over the Red Fort represents of the sovereignty of the nation; each year on Independence Day, the prime minister unfurls the national flag from fort and addresses the citizens of the country. In this sense, the Sikh flag may be seen as a claim of Sikh sovereignty. However, this is not a claim for replacing the Indian flag.

For in the Fateh Diwas, the Sikhs were not demanding a sovereignty separate from India (as was done in the movement for Khalistan). Instead, the celebrations demanded a kind of inclusion (through a degree of dominance) in the history of the Indian nation.

The DSGMC claimed in 2015 that Baghel Singh’s conquest of Delhi ‘paved the end of the mighty Mughal rule in India and beginning of war for Independence’. It therefore demanded that the Indian government announce the ‘conquest of Lal Qila by the Sikh forces in 1783 as a national event celebrated annually’.

This particular demand is claim for a place – a pride of place – in the larger narrative of Indian history.

The Fateh Diwas demands that all Indians remember this victory of the Sikhs and acknowledge their contribution to the nation. At the same time, Fateh Diwas comfortably feeds into the Hindu right-wing claim of Mughals being foreigners whose rule was characterised by oppression of the minorities.

However, the same right-wing has been highly critical of events of January 26 at the Red Fort and the call of “Dilli chalo” in the farmers’ movement. For, this time around, the one being conquered and vanquished is their own government.

Kanika Singh is a Delhi-based historian.