'I’m Scared to Tell You I Saved a Muslim': Hindu Man Who Rescued His Friend in Delhi Riots

During the North-East Delhi violence, while Hindus were rioting and setting ablaze mosques and shops, a few of them managed to rescue their Muslim friends, risking their own lives.

New Delhi: After more than a year, North-East Delhi has not yet recovered from the gory riots that have scarred the brotherhood that existed between Hindus and Muslims in the area. With the loss of 53 lives, those left behind have been left with fractured friendships. A few bonds have managed to survive – but under a cloud of secrecy.

Late at night on February 24, 2020, Naushad Akhtar, along with his neighbours watched a carnage unfold from their terraces. Akhtar claims that night he saw shops with Muslim names being burnt in the Mandi Gali in Mustafabad. The next morning, they woke up to realise bigger horrors were in store, with even homes being heavily vandalised.

When this mob arrived near Gadha Chowk, Akhtar says, “We told our Hindu neighbours, acquaintances that we can tolerate the mobs looting our houses but please ask them to not target our mosques.” Akhtar, who went to hide in the Tayyaba Masjid nearby, says that even when the masjid was being attacked and burnt, he had reached out to his Hindu friends in the area to get rid of the rioters.

The next day on February 26, Akhtar explains how after he had escaped the torching of Tayyaba Masjid, and rioters broke into his house, which also ran a two-room Madrasa, his Hindu neighbour Sunil had called him to ask a question. Sunil asked Akhtar whether he could write “Jai Shree Ram” on the main door of Akhtar’s house to save it from rioters. Without a second thought, Akhtar agreed.

Sunil says, “After the rioters left late that night, I painted my own name and Jai Shri Ram on Naushad’s door so that rioters stay away.” On being asked why he took this risk, he said, “Naushad is a very dear friend, and he has always been there for me.”

Sunil also explained how later, certain rioters realised this trick that Sunil had pulled off. He was threatened by the rioters and also asked to behave “like Hindus should” by the very same people who had arrived to wreak havoc on their simple lives. Akhtar recalls having a long beard back in 2015, now he says he’s not comfortable in it anymore. 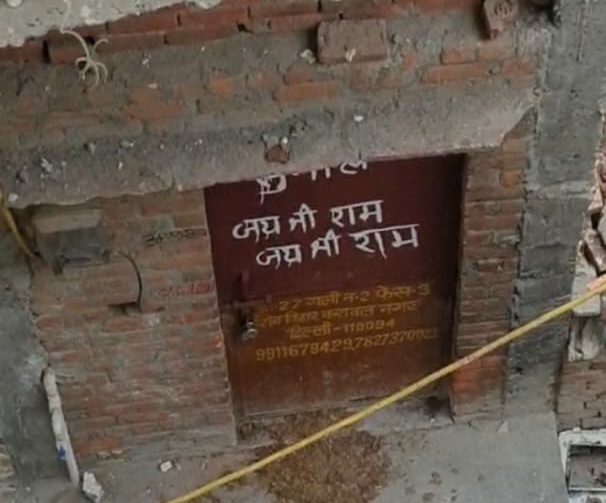 Akhtar says, “Bahut ajeeb manzar tha, Hindu tor bhi rahey they, jor bhi rahey they (It was a weird situation; Hindus were rioting but also saving victims).” While the riots have only strengthened Sunil and Akhtar’s bond, a year over, they say, the trauma has left indelible blemishes on many. Even now, they claim, for the littlest thing, like purchasing vegetables, locals prefer to buy from those ‘like them’. It has become blasphemous to engage with people not from your own religion.

On February 24, 2020, Afzal Khan was following his usual routine of arriving at his godown in Shiv Vihar. At 11:15 am, Khan says, he heard extremely loud voices chanting an unclear slogan from afar. As rods smashed the windows of his godown, the chants of Ram and the message of the mob became clear. Soon the rioters entered the godown and even before Afzal and his sons Ruhail and Tufail could move, the rioters locked them in a room, after which the rioters started setting the entire godown on fire with petrol bombs.

Soon the fire made its way to the room where the three were locked. As the rioters were leaving, the fire entered the plywood room and began burning the locked space. Afzal, who was trying to protect his sons and at the same time, break down the locked door, burnt his hands, face and hair badly during the ordeal.

After escaping from the room, just as Afzal was limping out of the godown, Lakhanpal (name changed) looked left and right to check whether the rioters had left and then rescued Afzal. Taking him home, Lakhanpal covered his wounds and drove an unconscious Afzal to his relatives’ house in Loni.

Talking to The Wire, Lakhanpal said, “It will be good if you don’t talk to me, I saved Afzal because he is my friend and neighbour. He didn’t do anything wrong. I’m scared to tell anyone anything more than this; my son is in the Delhi Police.” On being asked about why he didn’t intervene while Afzal’s godown was being vandalised, he said, “What reason would I give them? Would they understand my friendship with a Muslim? Please don’t ask me anymore questions; I don’t want to get into trouble.”

While Lakhanpal was quiet, wanting to retain his space among his family members and the society he didn’t want to upset, his anxiety of being perceived as a ‘Muslim sympathiser’ exposes the harsh truth of disapproval Hindus in the are receive, if they appear to be siding with the other.

Near the same area, in a narrow lane called Bhagat Colony, the Allah Waali Masjid stands newly rebuilt. The four-floor masjid, which was completely burnt during the riots and has reopened to believers only in March 2021, still houses burnt copies of the Holy Quran. This was the very masjid that was desecrated and a Hanuman idol was placed on the outer wall of the masjid. After this incident, many fled the colony, and the mosque now sees a very dismal number of believers in attendance. 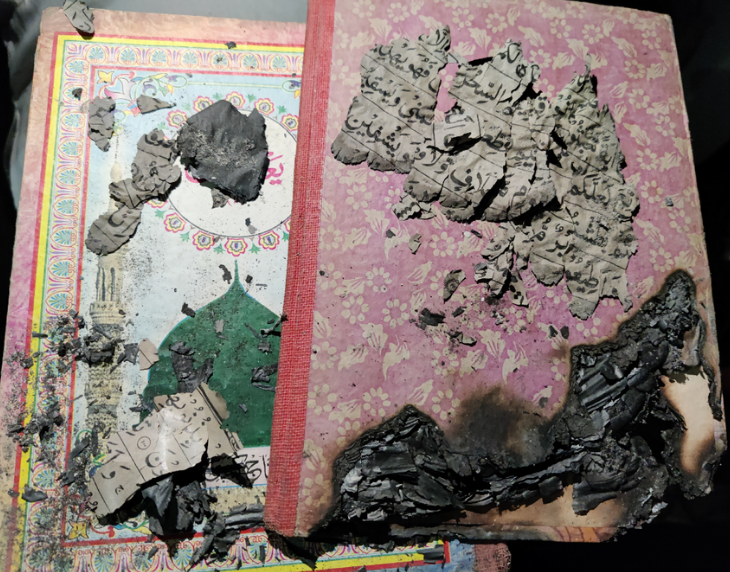 Haji Umar, a regular namazi at the Allah Waali Masjid, says that it was horrific to see the loot and desecration of the mosque, and even more disturbing to see bhagwa (saffron) flags and idols deliberately placed inside the mosque. He says, “In this lane of 43 houses, only seven to eight were occupied by Muslims till last; now the number is down to three.”

Imam Abdul Raheem, 38, has been through it all. From seeing the masjid in ruins and burying burnt Qurans and Hadith copies to re-opening the masjid to empty prayer mats, he feels the incident has robbed Muslims of the right to hold institutions accountable.

The priest from the nearby temple has always cooperated and been very supportive when times of Azaan (call to prayer) and Aarti (Hindu prayer) would clash, Raheem said. After the riots, the priest had assured them that he would discourage anybody who intended to harm Muslims or their mosques. But this hasn’t been enough to drive Muslims back to the mosque, or even to North-East Delhi.