If the State Merges Fully With Hindutva, Nothing Can Save India

Not just the political establishment – which has made its malicious intent clear – but the police and administration too have a duty to uphold the constitution. 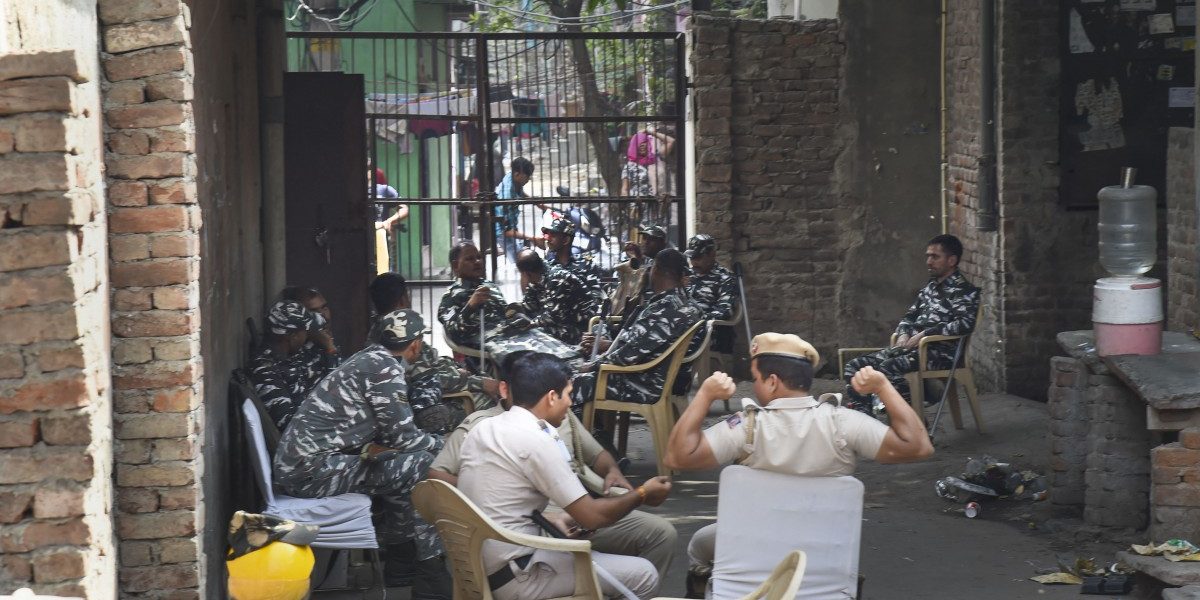 When we say ruling establishment, it does not mean the main ruling party, the Bhartiya Janata Party, which leads the Union government and many state governments. It also means it allies like the Janata Dal (United) or Apna Dal, as it is still a National Democratic Alliance government and not a BJP one, at least at the Centre and elsewhere too. These parties cannot say that they are not accountable for this violence.

This inevitably resulted in violence of varying degrees. Religious occasions like Chaitra Durga Puja, Hindu new year, Ram Navami and Hanuman Jayanti have been used to take out violent processions with open displays of lethal arms, slogans and songs abusing Muslims and threatening them with violence if they ‘don’t behave’, forcing their way into the Muslim localities and attempts to forcibly enter the mosques or planting saffron flag on them. It has led to angry reactions and clashes. Muslims have tried to repel and beat back the violent mob, which then becomes an excuse to claim that Hindus are not allowed to take out their processions in peace. The administration then claims that it is they who are the rioters. Muslims are booked, jailed and their properties are promptly bulldozed by the administration.

Also read: 13 of 38 Candidates Chosen For a Job Were Muslim – Enough for Sudarshan TV to Cry ‘Job Jihad’

The administration then becomes ultra-active. It arrests Muslims with a zeal that was missing when it was most required: that is to prevent violent processions to move through what are known in administrative parlance as ‘sensitive areas’.

The administration, despite working under a regime wedded to Hindutva, does have a memory of how such occasions are managed. Of carefully involving all communities, activating peace committees and being firm in not allowing processions to create violent situations. But increasingly we have seen the administration and police indulging the ‘Hindu’ masses and allowing them to express themselves emotionally which, to be precise, is abuses and threats of violence against Muslims.

This openly partisan attitude of the police and administration is a relatively new development in the history of the Indian state. Earlier, the administration at least wanted to ensure that such events pass off peacefully. They were always tense but the administration used to be on its toes. Alert and firm.

An example of such firmness and commitment for peace was the 2017 arrest — by the authorities in a BJP-ruled state (as Jharkhand was at the time) — of senior BJP leaders (including Yashwant Sinha, who has since left the party) who had sat on a dharna demanding their Ram Navami procession be allowed to pass through a Muslim mohalla.

District officials told the BJP leaders that two persons had died in violence along the route they wished to take in 1984 and that they would not be allowed to pass.

BJP supporters then resorted to stone-pelting, and the police had to use teargas to control them. Note how the BJP-led administration refused to relent and even resorted to detaining BJP leaders. This happened barely five years ago.

Now we see the administration giving way to the Hindutva forces who manage these events. It prefers to defer to the sentiments of the majority, while knowing well their intention.

It is this context which must be kept in mind when we react to what is happening in our country. In an unprecedented move, 13 political parties, some of which are competing with each other for power in different states and don’t share one ideology, came together to express horror at the state of affairs in the country. They criticised the prime minister for his studied silence while groups affiliated with the Hindutva network go on organising violence against Muslims, uninhibited.

In any democracy, such an indictment by the opposition would invite a response. But the prime minister continued to remain silent. This silence surprises many well-meaning people. But if we look at his record since he took over as the prime minister, there have been several occasions when people have demanded that Narendra Modi speak up. On a couple of occasions he obliged with vague statements, like “if you want to shoot, shoot me“. His constituency understands the message. But for others it gave them a cover: “See, the leader does not approve, now the followers have to be blamed for not listening to him. It is the fringe that is deviant.”

Also read: There Is More to Political Parties than Elections

Then elections would intervene. The leader, under the compulsion of making the right kind of ‘mahaul’ would be forced to resort to dog-whistles. Identify those protesting against the Citizenship (Amendment) Act by the “their clothes”. Or “shamsan-kabristan“ or “criminals are being put in the jail”.

His people have understood. He is now in a position where he has to say certain things for the world outside. Those words are not to be taken seriously by them. They know that he is one of them. Risen from the ranks.

The silence of the leader is understandable. It is his approval of what is being done. But more dangerous is the willingness of the state authorities, civil and police, to hand over the country to his people.

The mighty Delhi police allowed a Dharma Sansad in Delhi where calls were made for the genocide of Muslims. It allowed a congregation of the Hindu Yuva Vahini where pledges were made to take up arms to turn India into a Hindu rashtra and be ready to kill for it, if necessary. It rationalised and justified it by calling it an event to save the ethics of the Hindu community.

It also silently watched an open rally at Jantar Mantar in which calls to butcher Muslims were made. Its affidavit in the court admonishing those who complain against such slogans and speeches and its advice to them to be tolerant towards such expressions now makes it clear that Muslims cannot expect protection from them.

This is happening across India. The killing of Muslim farmers in Sipajhar in the state of Assam in the name of eviction forced an ex-police officer to compare the firing with the Jallianwala Bagh atrocity.

We know that the Indian police harbours prejudice against Muslims. But due to the dominance of secular politics, it was not proactively expressed. Now we see it out in the open. When the police and administration decide to join ranks with those who are ideologically against Muslims, then appealing to the good sense of the leader of this politics becomes irrelevant. We must remind the police and administration that there is still a constitution they are supposed to follow and implement. If they choose to allow it be trampled, nothing can save India.