The BJP's Defensiveness on 'Kairana Exodus' Exposes its Hindutva Agenda

Notwithstanding Modi's talk of 'vikas', the party's sustained politics of polarisation reflects its failure to move beyond Hindutva and its doublespeak. 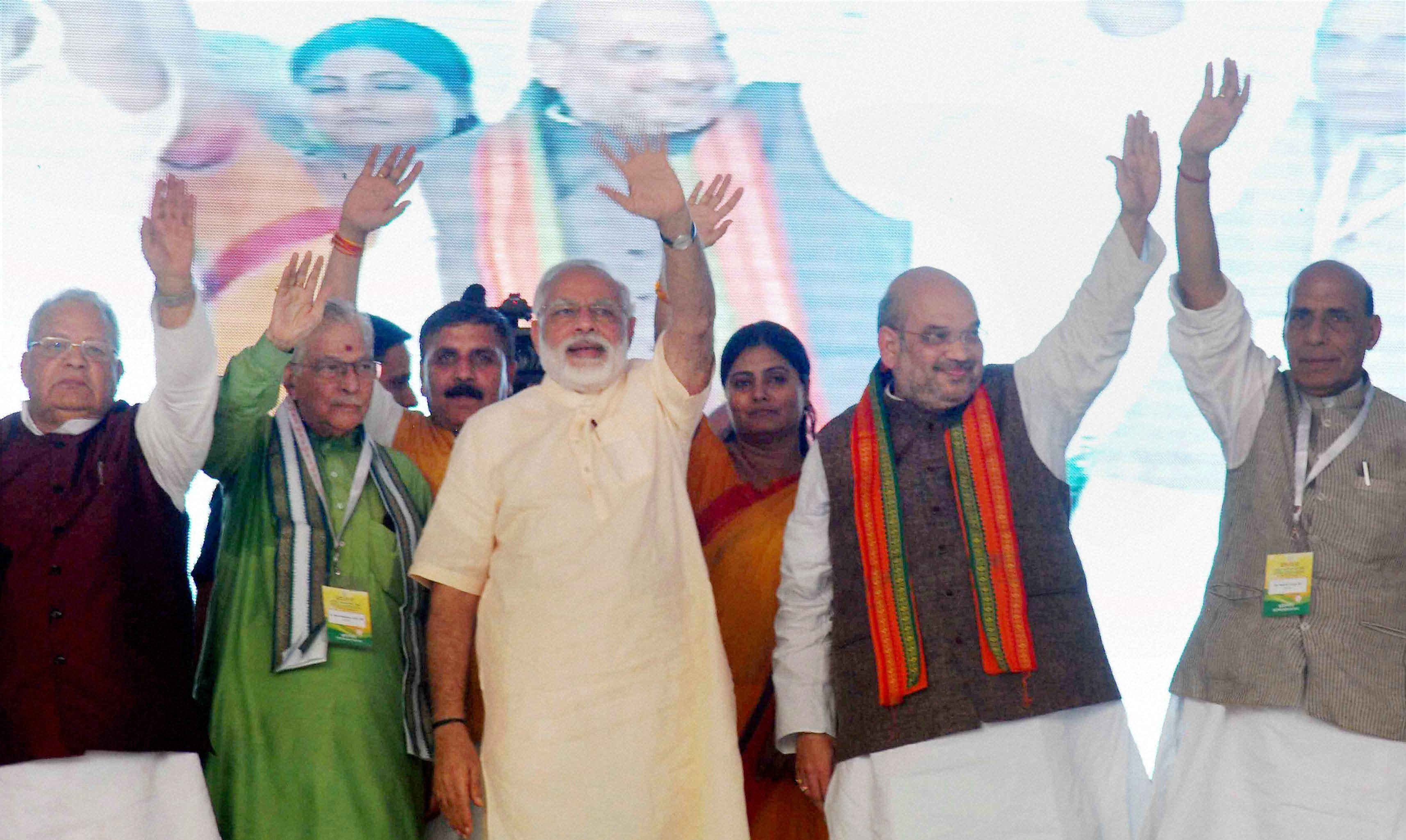 Vikas in one hand, communalism in the other: Prime Minister Narendra Modi and BJP’s national president Amit Shah during the party’s national executive meet in Allahabad on Sunday. Credit: PTI

Lucknow: When its veteran leader and member of parliament Hukum Singh spoke about an ‘exodus’ of Hindus from Kairana, his pocket of western Uttar Pradesh, it was evident that the Bharatiya Janata Party was up to its old games. The suspicion that his words were yet another attempt to arouse Hindu passions turned out to be true. Singh went on the back foot within the next 72 hours – shortly after the local administration and various media teams carried out a check.

“This is more of a law and order problem and not a Hindu-Muslim issue,” the 78-year old Singh conceded, three days after he had released a list of 346 Kairana residents, who, he alleged, were compelled by local Muslims to flee from their homes.

Singh did not stop there. He went on to claim that what was happening in Kairana was similar to the exodus of Pandits from the Kashmir valley, which naturally made the picture look very grim and  alarming.

Taking a cue from Singh, BJP chief Amit Shah made it a point to emphasise the issue at the party’s national executive in Allahabad, which was seen as a major build-up for the upcoming assembly elections in the country’s most populous state. UP’s importance stems not only from the size of its population (21 crore), but also from the fact that the ruling BJP bagged 71 of its 80 Lok Sabha seats in 2014, propelling Narendra Modi to the position of prime minister. No wonder Kairana figured quite prominently at the Allahabad meet, where the BJP bigwigs were busy drawing up a strategy to take UP’s currently low assembly tally of 41 to a minimum of 203 and thus control the state.

Even as Modi focused only on ‘development’ – which caused the unprecedented surge in his favour in the 2014 Lok Sabha poll – his man Friday, Shah, left no stone unturned in invoking Kairana, to the extent that the National Human Rights Commission (NHRC) issued a notice to the UP government.

On the flip side, the NHRC’s nudge made the otherwise lax UP government get down to business and do a door-to-door reality check. And this is what opened the Pandora’s Box of lies that was Hukum Singh’s allegation.

A report on the 118 residents, submitted on June 13 by the UP police and the Shamli district administration, found that five of them had been dead for a couple of years, while 55 had left Kairana between six and 11 years ago, and 46 had left five years ago, in 2011. A dozen of the names on the list were still in Kairana. All these facts blew the lid off Singh’s story. As the remaining names on the list were being checked, Singh hastily backtracked. “By mistake, someone in my team mentioned Hindu families. I asked them to change that. I stick to my stand that this is not a Hindu-Muslim issue. This is just a list of people who have left Kairana under duress,” he told mediapersons in Kairana on June 14. “I have asked my workers to re-verify… [A] few names may be off the mark, but largely it’s the same. It’s not a communal issue, but a law and order problem.”

Another check revealed that most of the people who had left Kairana had done so for personal, economic and social, reasons. While one individual left in search of better prospects in Haryana or Delhi, another left to better educate his children, since Kairana has no educational institutions of repute.

Furthermore, some of the people who fled did so because of unabated extortion by local criminal gangs, who have been enjoying the patronage of successive political regimes. Singh concedes this now, but he still insists that “the gangsters active in this area all happen to be Muslims and those who have fled on their account were Hindus.”

The problem was clearly criminal in nature, and demonstrative of what happens in large parts of the state, which is known to some as the “wild west”.  Extortion has been the mainstay of gangs operating in western UP. But the BJP gave the issue a communal colour, hoping to reap the benefits of polarisation in a few months’ time – namely, votes, when the state goes to the polls.

The BJP’s urge to engage in the politics of polarisation must be understood in the context of the Muzaffarnagar riots, which worked to its benefit in 2014. Over the past two years, while the party has been in power in the Centre, the flame of polarisation has been kept burning through issues like  ‘love jihad‘, ‘ghar wapsi‘  and ‘beef politics’, which were played up repeatedly in Dadri.

With the realisation that Ayodhya had outlived its vote potential, these ideas brewed in the saffron ranks. That the BJP has repeatedly taken these issues to the extreme reflects its failure to move beyond Hindutva – which Shah perhaps considers indispensable to the party’s poll agenda, even as Modi discreetly shuns it. The double-speak apparently aims to appeal to the multitudes who believe in Modi’s aspirational politics, while also keeping the party’s traditional vote bank in good humour.

Sharat Pradhan is a senior journalist in Lucknow