Suspended by the technology institution in Hubballi where they were studying, the three now have nowhere to go and live in constant anxiety that they will be attacked. 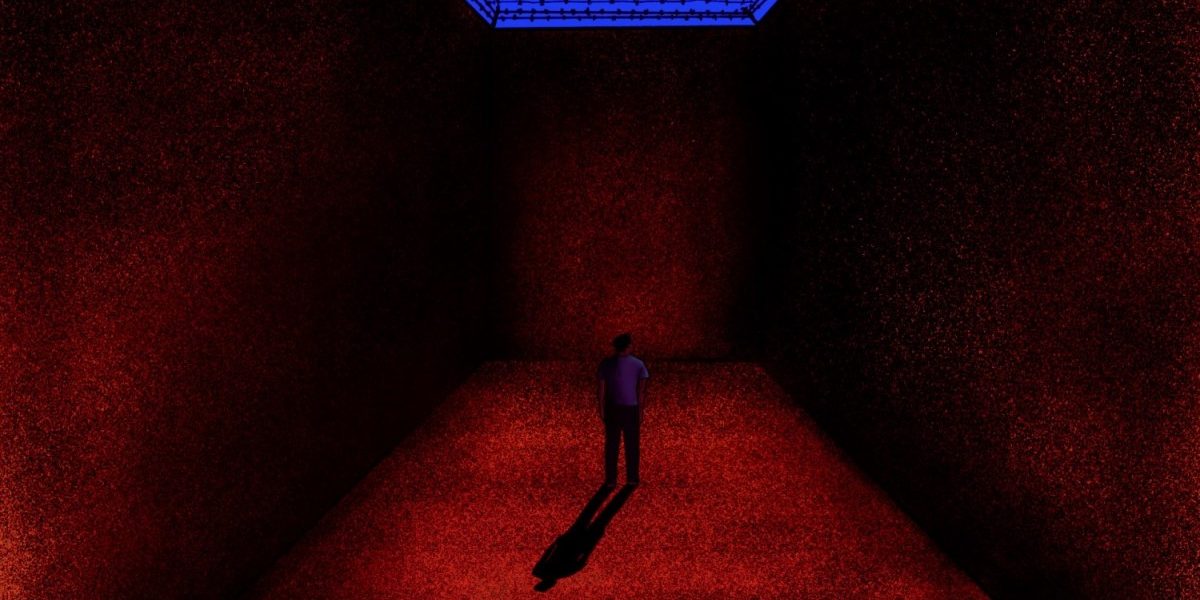 Mumbai: “The 109 days spent in Hindalga Central Jail in Belgaum were terrible but what followed after release has been inexplicable,” says 22-year-old Aamir Mohiuddin Wani, one of the three Kashmiri students who was arrested in February and charged with sedition Hubballi, Karnataka.

The three civil engineering students were studying at the reputed KLE Institute of Technology, in Hubballi, when they were arrested in February for allegedly creating a “pro-Pakistan” video. The three were attacked and publicly heckled on multiple occasions after the incident.

Now that they are out on bail, they live in fear and have since had little option but to shut themselves in a rented room in Bengaluru.

After police failed to file a chargesheet within the stipulated 90-day period, the district magistrate court granted them “default bail” on June 11. The initial bail condition restricted their movement just within the Dharwad district (Hubballi is a part of Dharwad district) limits. But after they appealed to the court and cited security reasons, the condition was relaxed. The students had then moved to Bengaluru and have been staying in a rented room in a locality where, according to them, several Kashmiri youths live.

Shifting to a big city has not really quelled their fear, they say. “We are afraid to even step out of our room. We just stay indoors hoping no one finds out about us. We have been attacked twice and somehow were lucky to have been saved, we won’t be lucky always,” Aamir told The Wire.

Aamir was in his sixth semester of engineering, while the other two—Basit Aashiq Sofi and Talib Majeed Wani—were in their second year at the time of the arrest. On February 14, this year, on the first anniversary of the Pulwama attack, a video suddenly emerged on their college social media group. The video, featuring all three, allegedly contained content that hailed Pakistan. Nationalistic sentiments were already at a heady high across the country at the time and the sudden emergence of a pro-Pakistan video put these students in a precarious spot.

The university, terming the video “anti- national”, immediately turned them in. 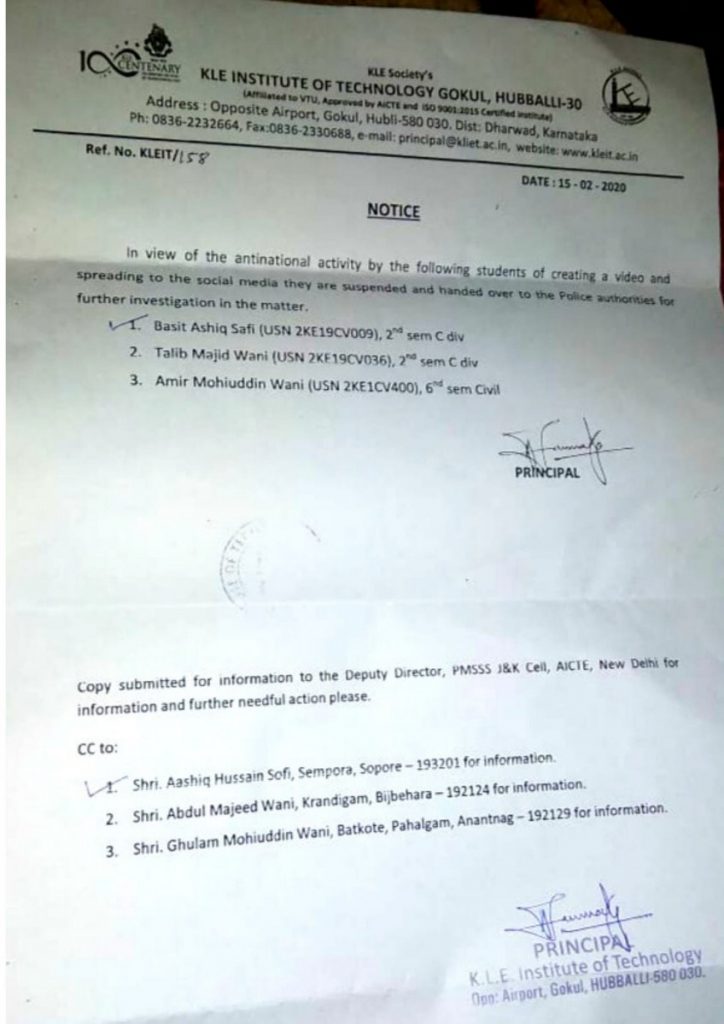 The notice by KLE Institute of Technology, announcing the students’ suspension.

A case was registered under Sections 124A for sedition and 153A (promoting disharmony, enmity or feelings of hatred between different groups on the grounds of religion, race, language, etc) of the Indian Penal Code. Even before the police could turn up, a large violent mob of local rightwing activists, including Bajrang Dal members, gathered inside the college and manhandled the three. 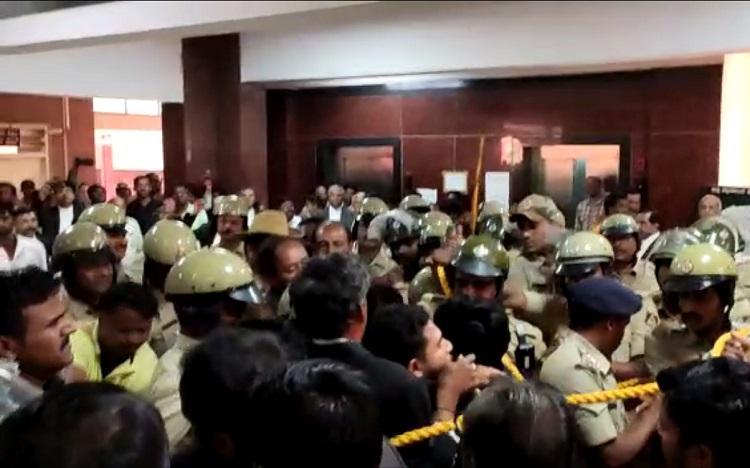 Lawyers were apparently roughed up at the Dharward court. Photo: Screengrab

A second attack followed in the court premises where several lawyers in black coats suddenly transformed into an angry Hindutva mob and abused and attacked the three students. They also cornered the defence lawyers and threatened them of “dire consequences” if they continued to represent these students. The bar association even went on to pass an unconstitutional resolution preventing lawyers from indulging in an “anti-national activity” by representing the Kashmiri students.

Following the chaos, a team of lawyers from Bengaluru took up their case pro bono and have continued to appear before the court amid extreme hostility and threats to their own lives.

The video, the students say, was recorded in October last year but was intentionally leaked by someone on campus in the month of February. “Around then [October 2019], Kashmir was under a complete communication blackout and we had not been able to get in touch with our family members. We would send our video messages to one local Kashmiri YouTube channel ‘Gulistan’ with the hope that it would eventually reach our families,” one of them told The Wire. Another student claimed that the video had been made in jest and never intended to be sent out.

“We were just goofing around. We had sung some Kashmiri songs and had spoken a few lines in our local dialect. Later somehow, the video was leaked. It was tampered with and some Pakistani song was overlaid. We have no idea how that happened,” they claim.

Aamir, Basit and Talib all come from poor families. Their parents work as daily wage labourers and have been struggling to make ends meet. “But they wanted us to study,” they say. The trio took admission to the KLE Institute of Technology through the Prime Minister’s Special Scheme Scholarship (PMSSS) specially designed for J&K students.

“Soon after our arrest, our families had to leave everything behind and come to Karnataka to ensure we are safe,” Aamir says. After Basit and Talib’s fathers fell ill last month, they had to return to Kashmir. Ever since, Aamir’s elder brother Adil has been the sole caretaker of the three. “The situation here was so tense that it impacted Basit’s father psychologically. Talib’s father developed a heart ailment. Since none of us had money to carry on with their treatment here, we decided that they would return home and I would stay back with the boys,” Adil says.

The students say their families have sought help from their friends and relatives and have now exhausted all options. “We even considered working while in Bengaluru. But finding a job here is difficult, especially considering the lockdown,” Adil says.

The only way the three youth can return to normal life is by returning to their education, Adil feels. Now that the house owner has asked them to vacate the room, the men have been in quandary. “If the college lets us back, we wouldn’t have to struggle to find accommodation. Also, our family members can return home and not worry about us like this,” Aamir says. 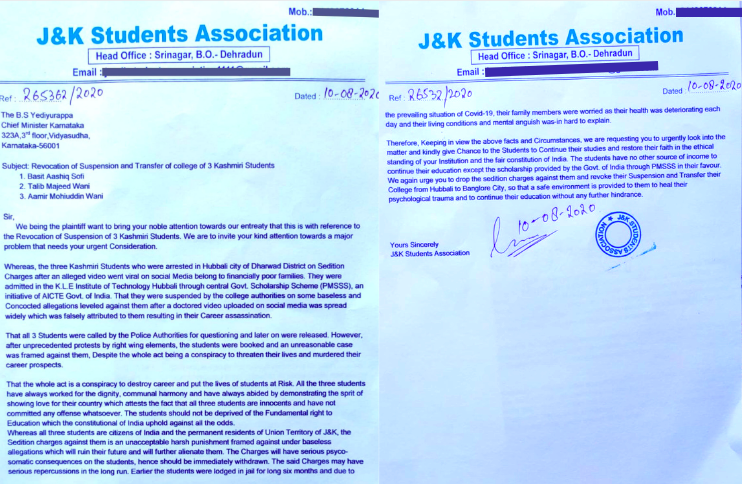 The letter sent to B.S. Yediyurappa by the J&K Students Association.

The Jammu and Kashmir Students’ Association based in Dehradun has offered to help. They have written a letter to Karnataka chief minister B.S. Yediyurappa requesting him to have all three students reinstated. “The case will go on at its own pace but their education shouldn’t suffer,” Nasir Khuehami, the national spokesperson of J&K Students Association told The Wire.

The three students have meanwhile also appealed to their college authorities to take revoke the suspension. The college had suspended them even before the matter reached court. But now the college authorities want the students to approach the court if they want to be let back in. “The case is still pending in court. We can’t take any decisions on our own. We will have to get a clear instruction from the court and we will accordingly proceed,” a senior college official told The Wire.