"Mediawaalon ho ya Mullahwalon?" an armed mob asked this correspondent. 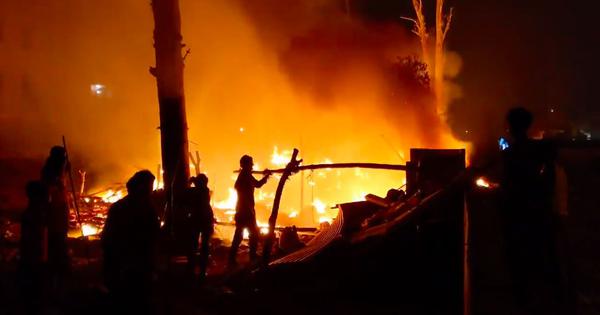 New Delhi: Late into the evening of February 25, armed and masked men were setting fire to jhuggis (slum dwellings) and vehicles in Mustafabad in North East Delhi, while the Delhi police looked on.

What had begun in the area as confrontations over anti-Citizenship (Amendment) Act protest sit-ins, then blew up into communal clashes, was continuing into the night as Hindutva mobs alone given license to run riot.

Near a group of burning homes, other residents of the slum – who identified themselves as Hindus from the Dalit Mahavat jaat – told The Wire that the jhuggis belonged to Muslims who had fled the area the previous day. They said the fires were started by men shouting ‘Jai Shri Ram’, and others said the men were members of the Bajrang Dal.

Further down the road, on the northern side of the Eastern Yamuna Canal, a new fire was started by groups of masked and armed men.

The area is on the border of Delhi and Uttar Pradesh, and UP police officers of the nearby Loni Road police station, with multiple jeeps and carrying carbines, stood at barriers but said they were unable to engage the mobs a hundred metres away, in Delhi. The Loni Road policemen believed the new fire was a burning tempo vehicle.

At least two Delhi policemen were standing by, close to the new fire and the mob. When the armed mob turned to approach The Wire‘s correspondent, jeering “Mediawaalon ho ya Mullahwalon?“, both the Delhi and police teams only said they could not offer protection and reporters present should escape on their own.