How Gujarat 2002 Turned India Into a Nation of Pathological Liars

Gujarat in 2002 was already living in the post-truth era, much before the world started using this term. And Gujarat then was a sign of what India, as a whole, was to become. 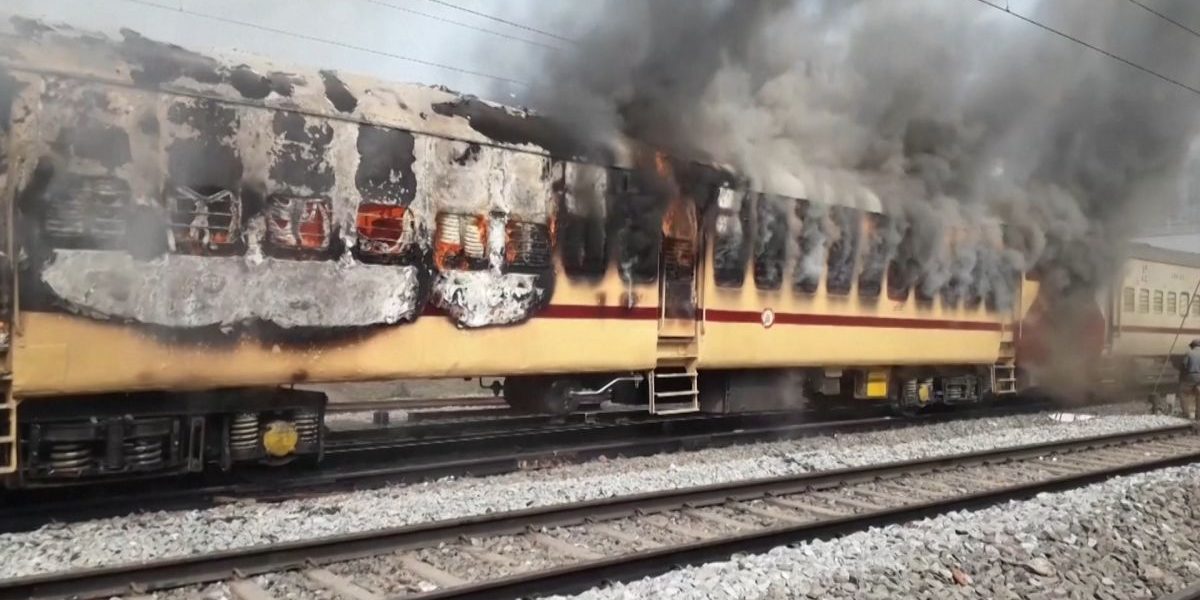 2002-2022. It has been 20 years; in a nation’s life, that is a short span of time. But for us mortal humans, it means the passing away of a generation, taking their memories with them to their graves; the coming of age of a generation with memories they don’t know what to do with; and the birth of a new generation, growing up with no memory of it at all.

We are, of course, talking about Gujarat in 2002; about the pogrom against Muslims. But while we talk about it, we have to also remember 1992 and the destruction of the Babri Masjid.

1992 fathered 2002. The demolition of the mosque was condoned as a spontaneous emotional outburst of Hindus which the mosque could not withstand; a reaction to some perceived action from medieval times. The action? The building of a mosque by Babar or his men, by demolishing a temple on the spot where Ram was purportedly born.

Similarly, the 2002 pogrom against Muslims in Gujarat was sought to be legitimised as a reaction to a perceived action by Muslims in Godhra. The action here was the burning of coach number 6 of the Sabarmati Express, carrying ‘Ram sevaks’ who had gone to Ayodhya, to visit the site where the rubble of the demolished mosque lay surrounding a makeshift Ram temple. Fifty-nine of them died in the fire in the coach.

No investigation was needed to reach the conclusion that the coach was burnt by Muslims. A meticulous plan was hatched to use the deaths of the 59 Hindus in the fire to launch mass violence against Muslims. The bodies of the dead, instead of being handed over to their families, were given to Vishwa Hindu Parishad (VHP) and Rashtriya Swayamsevak Sangh (RSS) leaders, to be paraded around in a procession in Ahmedabad.

And then, what was anticipated turned into reality. Muslim localities, houses, business establishments started getting attacked, looted, burnt, destroyed. Muslim women raped; Muslims maimed and killed. And then came their mass displacement.

Also read: The Soul-Wounds of Massacre, or Why We Should Not Forget the 2002 Gujarat Pogrom

This pattern was to be repeated in 2007, in the faraway land of Kandhamal in Odisha. The action? Unknown assassins shot dead Lakhmananand Saraswati, a hatemonger masquerading as a monk. His body was, again, handed over to the members of the VHP, paraded through the villages of Kandhamal. The reaction? Looting, burning, destruction of houses of Christians and churches; Christians slaughtered and then, again, the mass displacement of Christians.

What was the government of Gujarat doing when the Gujarat massacre was taking place? Two years after the incident, the Supreme Court, in its 2004 judgment, wrote: “Modern-day ‘Neros’ were looking elsewhere when Best Bakery and innocent children and women were burning and were probably deliberating how the perpetrators of the crime can be saved or protected.”

That ‘modern-day Nero’ was to graduate from the chief ministership of Gujarat to the prime ministership of India 12 years after the carnage. He, who had justified the pogrom by propounding the theory of ‘action and reaction’.

At that time, no questions were asked as to how and why the chief minister was allowed to visit the burnt coach, when it should have been cordoned off as evidence to be kept safe for forensic investigation. Why was a spectacle made of this burnt coach? Why were the people of Gujarat, especially Hindus, not interested in knowing the truth about the burning, which required investigation? Why did they prefer to believe in a truth that was given to them: that it was burnt by Muslims and that these Muslims had to be taught a lesson for having committed this crime.

Gujarat was already living in the post-truth era, much before the world started using this term.

Five years later, in 2007, I found that this culture of truth-making had become all-pervasive in the state. A much-decorated senior writer tried to persuade me to believe that the Muslims were so devious that they even conspired to send their handsome men on motorcycles to lure gullible Hindu girls into their ‘love-trap’. He, who is known outside Gujarat for his humanism, was convinced that Muslims needed to be punished for this crime.

His theory, later termed as ‘love jihad’, was widespread in Gujarat. There was a man called Babu Bajrangi who dedicated his life to the mission of saving ‘poor Hindu girls’. A friend gave me a leaflet in Gujarati by Bajrangi which said, “In every home, there is a live bomb. It can explode any moment. Who is this live bomb? Our daughters!”

The leaflet also asked parents to keep an eye on their daughters. If your daughter was missing, you could depend on Bajrangi’s services, which are absolutely free. “If you save one girl, you save a hundred cows,” the leaflet ends, exhorting the Hindus to start saving these bombs.

Bajrangi made it his life’s purpose to “rescue” these misguided and fallen Hindu girls from the clutches of the badmash (mischievous) and the lafange (the lumpen).

After my visit to Gujarat, I wrote in Tehelka in April 2007, “You’ll find large posters in the colleges of Ahmedabad bearing Bajrangi’s warning. The stories of very rare cases of Hindu–Muslim marriages have been woven into a pattern. The thought that their own girls are being used to increase the tribe of the badmash, that is, Muslims, makes the Hindu blood boil.”

Bajrangi was to be jailed for life for having participated in the massacre of 97 people in Naroda Patiya – an Ahmedabad locality which was part of the 2002 pogrom; a crime for which Maya Kodnani, a minister of the Gujarat government then headed by the present prime minister of India, was also sentenced to 28 years in jail. Both of them are now out of jail; Kodnani’s conviction was overturned. Not surprising, as the man then described by the highest court as a modern-day Nero was to be hailed as a ‘visionary’ by another lordship of the same court.

Gujarat then was what India was to become. After the 2014 election results, a Gujarati friend remarked, “You thought only we Gujaratis were so intellectually impoverished that we chose him as the leader. See, you have come down to our level. He is now your prime minister.”

India’s response to 2002 came in 2014; the 2014 election result would not have been possible without 2002. Why do I say so? Because there was something dramatically different about the violence of 2002 and the other instances of mass violence India had witnessed against Muslims and Sikhs before. Never had the leader of the state sounded so brazen about it.

Also read: Why Gujarat 2002 Is So Easy to Forget

The violence was called a shame for Gujarat. As a retort, Narendra Modi led a Gujarat gaurav yatra; apparently to restore the honour that was sullied by the ‘enemies of the state’. “What was there to be ashamed of?” he asked his people, leading them into active denial of the violence. In his speeches during the yatra, he made his people believe that the story of violence was a conspiracy of enemies who wanted to tarnish the image of Gujaratis.

Gujaratis loved this brazenness; this lie. They had discovered their ‘Dear Liar’. A decade later, we had to accept him as our own.

Modi had made Gujarati Hindus complicit in the crime; they knew about it, many of them had participated in it, and he was telling them that they had not done it. Their fate was tied.

One lie led to the other. In 2007, the devastating flood in Surat was much talked about outside Gujarat for its mismanagement by the government. In my old notes, I found my conversation with a Gujarati Hindu about it.

“Was not Surat flooded a few months back and did not the people of Gujarat suffer?” I asked my driver.

“No, Narendrabhai was there to take care of everything,” he replied. “How can anything go wrong when Narendrabhai is keeping watch?”

In 2013, a claim was made that Modi had rescued 15,000 Gujaratis stuck in the devastating flood in Uttarakhand in that year. The lie was debunked immediately, but it lived as a truth in the minds of his believers.

The lie about the train burning at Godhra or about the pogrom against Muslims thereafter; the lie about terrorists gunning for the life of Narendra Modi; about the encounter operation that killed Ishrat Jahan; the lie about a vibrant Gujarat, about the development model of Gujarat, led to bigger and bigger lies.

It is a cruel coincidence that the anniversary of the 2002 pogrom is preceded by the anniversary of yet another pogrom directed against Muslims; one done much later, in 2020, in Delhi; this time with Modi leading the entire country, not just the state. As the Gujarati Hindus were led into denial about 2002 by the then chief minister, so too are Indians being led into denial about the 2020 Delhi violence; by blaming it on Muslims.

We were exasperated and angry with Bilkis Bano, who would not relent in her pursuit of justice. She fought from 2002-2019, from Gujarat to Bombay to Delhi, forcing the Supreme Court to recognise the enormity of the injustice done to her.

We feel annoyed that Zakia Jafri has still not relented from her demand for justice and wants to put the man on trial for the conspiracy which led to the killing of her husband, Ehsan Jafri, and scores of Muslims in the Gulberg Society in 2002.

We ran away from 2002 too soon. However, it will not leave us. Without dealing with it collectively, we will not able to understand why we did what we did in 2014 and repeated in 2019, and why we have now turned into a nation of pathological liars.