Titled “Unpopular Stories: Narrating the Indo-Islamic Past and Navigating Present-day Prejudices”, the talk was scheduled to be held in Hyderabad on August 11.

New Delhi: In yet another attack on freedom of expression in India, right-wing groups have prevented American historian Audrey Truschke from delivering a scheduled lecture in Hyderabad. The historian on Wednesday said her lecture has been cancelled due to pressure from right-wing groups. Her talk, titled ‘Unpopular Stories: Narrating the Indo-Islamic Past and Navigating Present-day Prejudices’, organised by the Krishnakriti Foundation in association with History for Peace, was to be delivered on August 11.

Announcing the cancellation on social media, Truschke wrote: “Today is a sad day for the pursuit of knowledge and academic freedom, and it is a happy day for proponents of the Hindu Rashtra.” 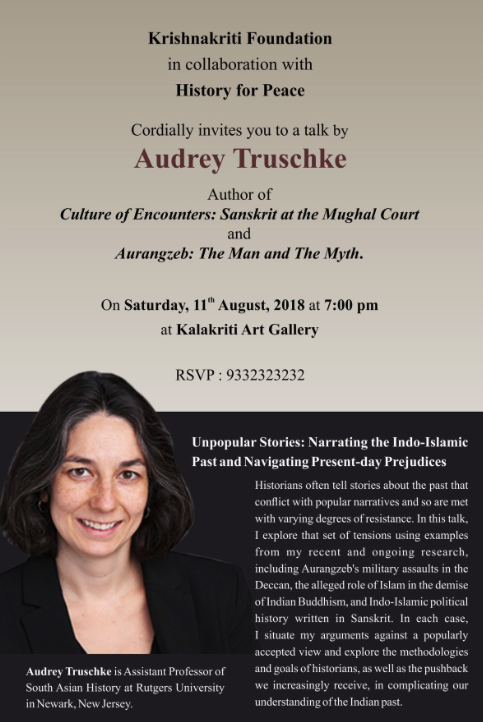 She said she was to speak on areas of her academic research including Mughal history and Sanskrit literature. “I was especially looking forward to talking with Hyderabadis about Aurangzeb’s brutal assaults on sultanates in the Deccan in the 1680s and debates concerning what brought about the end of Indian Buddhism in the early second millennium [CE]. I deeply regret that my presentation and the subsequent exchange of ideas will not occur.”

She said that the foundation which had invited her cancelled the event after being informed by the Hyderabad police that several individuals had written letters protesting her appearance at the event. “I saw only one such letter, and it was from an individual with self-admitted connections to the RSS, BJP and BJPM,” she wrote.

A member of the Krishnakriti Foundation, speaking to Deccan Chronicle, said the cancellation was ‘unfortunate’. “The organisers were unable to find a secure location in Hyderabad,” the official said. “A cycle of discussion was held among various city-based culture and heritage enthusiasts, who offered to hold the event, however, foreseeing trouble, the talk has been called off.”

Even before Truschke’s announcement, there were doubts that the lecture would be held as scheduled, since the venue had twice been shifted. The lecture, earlier to be held at Kalakriti Art Gallery, was later shifted to the Bhaskara Auditorium at the BM Birla Science Centre. The Daily Pioneer on Tuesday quoted the head of the Birla Science Centre, B.G. Siddharth, as saying that he had “politely declined” permission for the event fearing it may create a controversy.

“The cancellation of Audrey Truschke’s event in Hyderabad is not to be blamed on the Bajrang Dal alone. It is a result of the collective cowardice of the state government, the organisers, and self-appointed, self-certified cultural leaders of the city,” Jyotirmaya Sharma, professor of political science at the University of Hyderabad told The Wire.

Sixty-eight persons, including intellectuals and academicians, have signed a statement demanding the Hyderabad police to give permission for the lecture.

Truschke is assistant professor of South Asian history at Rutgers University. Her books Culture of Encounters: Sanskrit at the Mughal Court and Aurangzeb: The Man and the Myth have been widely appreciated by scholars, even as they have been criticised by Hindutva groups. Culture of Encounters won the American Historical Association’s  John F. Richards Prize in 2017.

In April, Truschke was trolled online after she tweeted that in Valmiki’s Ramayana, during the agnipariksha, “Sita basically tells Rama he’s a misogynist pig and uncouth” and during the golden deer incident, “Sita accuses Lakshmana of lusting after her and setting up Rama.” Although she called the tweets ‘loose translations’, she was attacked on Twitter, with some also threatening her with physical harm. In a subsequent piece in The Wire, she wrote about the reaction:

“Several days ago, I pointed out on Twitter that Valmiki’s Ramayana contains episodes where Sita criticises Rama, whereas representing Sita as chiding Rama today – as did a recent cartoon – often leads to extreme controversy. I soon found out that many now find intolerable even criticisms preserved within Valmiki’s text, especially when rendered into idiomatic English.

“After offering a colloquial summary of Sita’s admonishment of Rama during the agnipariksha(fire test) episode, I found myself engulfed in an avalanche of hate. I received – on Twitter, Facebook, and private e-mails – death threats, rape threats, anti-Semitic messages, misogynistic comments, racially-charged attacks and so forth. Some of the death threats were notably graphic in their detail.”

Truschke is currently on a speaking tour in India. The Hyderabad lecture was to be the third in her tour after Kolkata and Delhi.