A large mob consisting of men from various Hindutva outfits created a ruckus outside the bride’s home, clashed with police. 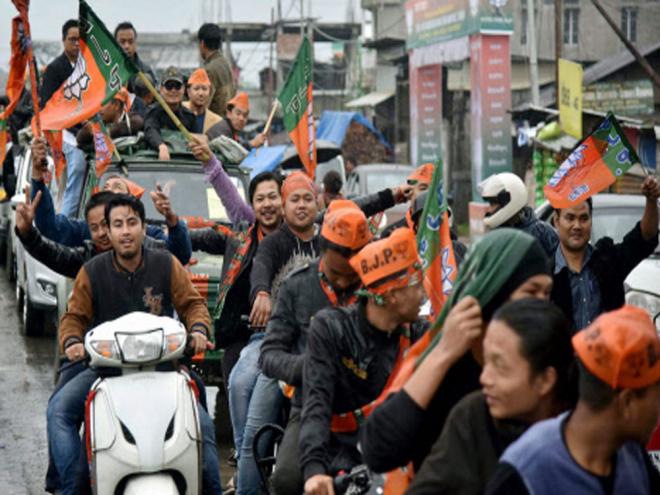 New Delhi: Bharatiya Janata Party and Bajrang Dal workers on Friday clashed with the police in Ghaziabad over the marriage of a Muslim boy and a Hindu girl which they claimed was an act of ‘love jihad‘.

Thirty-year-old Mansoor Harhat Khan, an MBA, married 28-year-old Nupur Singhal, a doctor at a Ghaziabad court under the Special Marriage Act and held a reception at the girl’s house at Raj Nagar in Ghaziabad. By afternoon, a massive group consisting of various Hindutva outfits, led by BJP Ghaziabad city president Ajay Sharma, created a ruckus outside the woman’s home. They staged a sit-in protest outside the house and disrupted traffic.

‘Love jihad’ is a term coined by Hindutva groups to project inter-religious romance or marriage between consenting adults as an “attack” on “Hindus”.

The police first tried to pacify the protesters, asking them to move out of the area, but when they refused to relent, the police lathi-charged them.

The police even tried to organise a dialogue between the Bajrang Dal members and the family, but the protesters refused to budge. The family too was not interested in any such dialogue, insisting that the marriage was their private business.

Pushpendra Kumar, the father of the bride, told IANS, “I had been receiving phone calls for last two days to stop this marriage. But both are major and mature enough to know what’s wrong and what’s right.”

“They have decided to live together, so they have registered their marriage under the Special Marriage Act in Ghaziabad. We had arranged a reception party today (Friday). I don’t see any love-jihad in their marriage,” Kumar said

The BJP’s Sharma told the Times of Indiathat the families had not taken “permission” to hold the marriage and it was a case of forced conversion.

Bajrang Dal Meerut province convenor Balraj Dungar told the Times of India, “We will not tolerate this at any cost. We will see how long they hide behind the police”.

“I was expecting something of this sort and was well prepared. It does not matter what people think. It was our decision,” the bride told the Times of India.

The police said they used mild force to disperse the crowd. “How can the police allow people to barge into someone’s house? We got a distress call and we performed our duty,” said SSP H.N. Singh.

The family has filed a complaint at Kavi Nagar police station and an FIR is expected to be filed soon.