'Hindu Who Doesn't Vote For Me Has Miyan Blood in Veins': BJP MLA Threatens Muslims With Violence

In a video that has been shared multiple times on social media, Raghvendra Pratap Singh uses numerous expletives towards Muslims, promising to get them beaten if they "insult Hindus and look at Hindu girls". 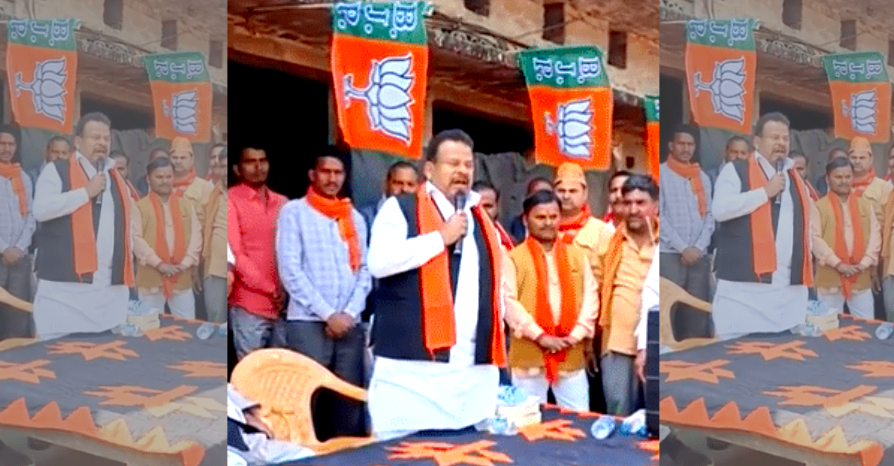 New Delhi: A video has surfaced on social media showing a Bharatiya Janata Party MLA, known for making communally divisive campaign speeches, threatening violence on Muslims and saying that any Hindu who does not vote for him in the Uttar Pradesh assembly election has Muslim blood in his veins.

Filmed in Uttar Pradesh’s Dumariyaganj on February 19, according to journalist Alishan Jafri, the BJP candidate Raghvendra Pratap Singh uses numerous expletives towards Muslims, promising to get them beaten if they “insult Hindus and look at Hindu girls”.

Singh is heard speaking in the video in a Hindi dialect. Jafri translates a key section of this speech thus:

“Any Hindu who doesn’t vote for me has Miyan blood in his veins. He’s a trait0r. He is a bastard son of Jaichand. He’s a sinner son of his father…I am warning you this time…traitors of Hindu religion will be destroyed.”

“Any Hindu who doesn't vote for me has Miyan bl0od in his veins. He's a trait0r. He is bast@rd son of Jaichand. He's a haramkh0r son of his father…I am giving warning this time…trait0rs of Hindu religion will be destroyed.”

Singh then continues, “Even after so many atrocities, if a Hindu goes over to the other side, he should not be able to show his face on the streets. Even after being warned once if you do not understand, then I will tell you who Raghavendra Singh is.

“It doesn’t matter if you insult me or betray me, but if you try to humiliate our Hindu society, then I will ruin you,” he also says.

Various clips from Singh’s speech have been circulating online. In other sections of his speech, Singh is more direct with the anti-Muslim component of his rhetoric.

Singh claims that the “terrorism of miyans (a pejorative for Muslims) has decreased since he took office.” He also warns Muslims that he will send them to Pakistan if they look at Hindu women.

“Listen Muslims, if any Hindu is insulted and if you look at any Hindu girl, then I’ll get you beaten so much and cut so much…that…” he says, the latter part of his warning drowns out amidst ‘Jai Shri Ram’ chants.

The sparse audience is seen and heard clapping enthusiastically at various points of Singh’s speech. Minors are visible in the crowd.

Siddharthnagar Police has replied to a tweet by journalist Deepak Sharma, in which the latter has attempted to catch the Election Commission’s attention, and said it has taken cognisance of the case was taken and that the “inspector-in-charge of Dumariyaganj was directed to register the case under relevant sections.”

Later in the day an FIR was registered at Dumariyaganj police station against Singh, under Indian Penal Code sections 153A (promoting enmity between different groups on grounds of religion, race, place of birth, residence, language, etc., and doing acts prejudicial to maintenance of harmony), 295A (deliberate and malicious acts, intended to outrage reli­gious feelings of any class by insulting its religion or reli­gious beliefs), 505(2) (statements creating or promoting enmity, hatred or ill-will between classes) and 506 (punishment for criminal intimidation).

Jafri has written earlier for The Wire that Dumariyaganj has a strong Muslim presence constituting around 37% of its population.

Singh is contesting against Samajwadi Party contender Saiyada Khatoon, whom he had defeated by the narrow margin of 171 votes in 2017, when she had contested for of the Bahujan Samajwadi Party.

In a live video uploaded to Facebook on February 11, 2022, Singh is heard saying, “Since I became an MLA, they (the Muslims) have stopped wearing skull caps. If you vote for me again, they will start wearing tilaks.”

Singh continues in the video: “Will there be ‘Jai Shri Ram’ or ‘Walekum Salam’?” As his supporters respond with slogans of ‘Jai Shri Ram’, Singh asks them to swear on Goddess Durga that they will support the saffron party. “Durga ji is here with us, promise once in front of her,” he says.