"Non-Hindus are prohibited from visiting the Ganga's bank in Varanasi," the posters read. "This is a warning, not a request." 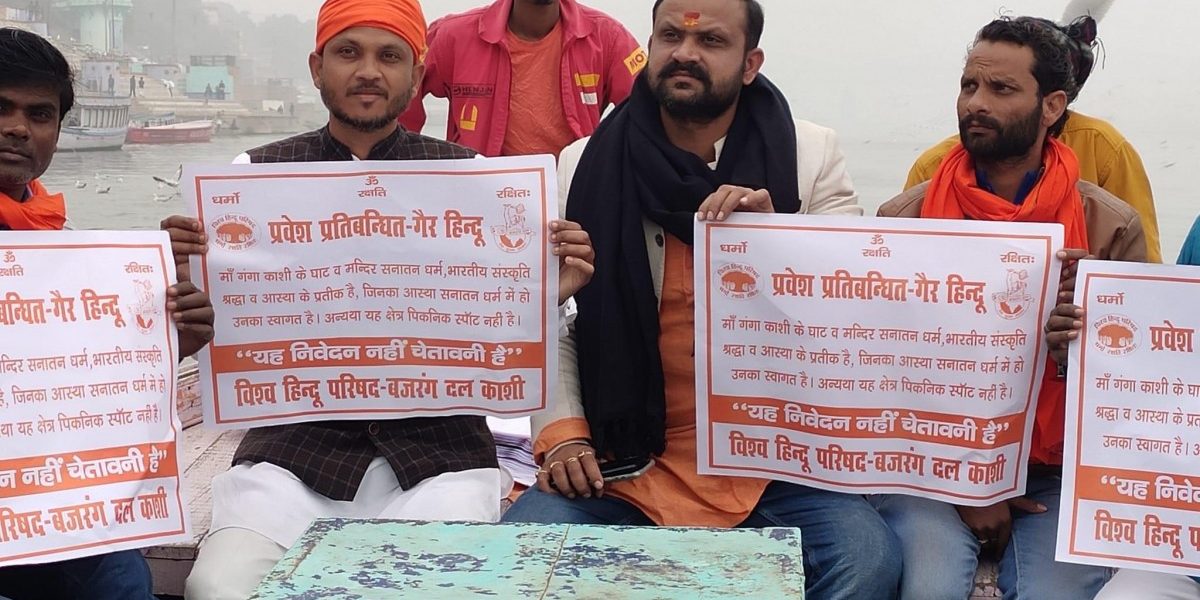 Lucknow: Alleged members of two right-wing Hindu groups, the Vishwa Hindu Parishad (VHP) and Bajrang Dal, have been putting up posters around the ghats of Varanasi that read, “Non-Hindus are prohibited from visiting the Ganga’s bank in Varanasi.” Leaders of these groups also shared photos of themselves putting up these posters on social media.

The posters read, “This is a warning, not a request.”

Varanasi is the parliamentary constituency of Prime Minister Narendra Modi.

These posters, which photos show were put up by saffron-clad individuals, can be seen at various ghats across the city – Panchganga Ghat, Ram Ghat, Dashashwamedh Ghat, Assi Ghat and Manikarnika Ghat included. 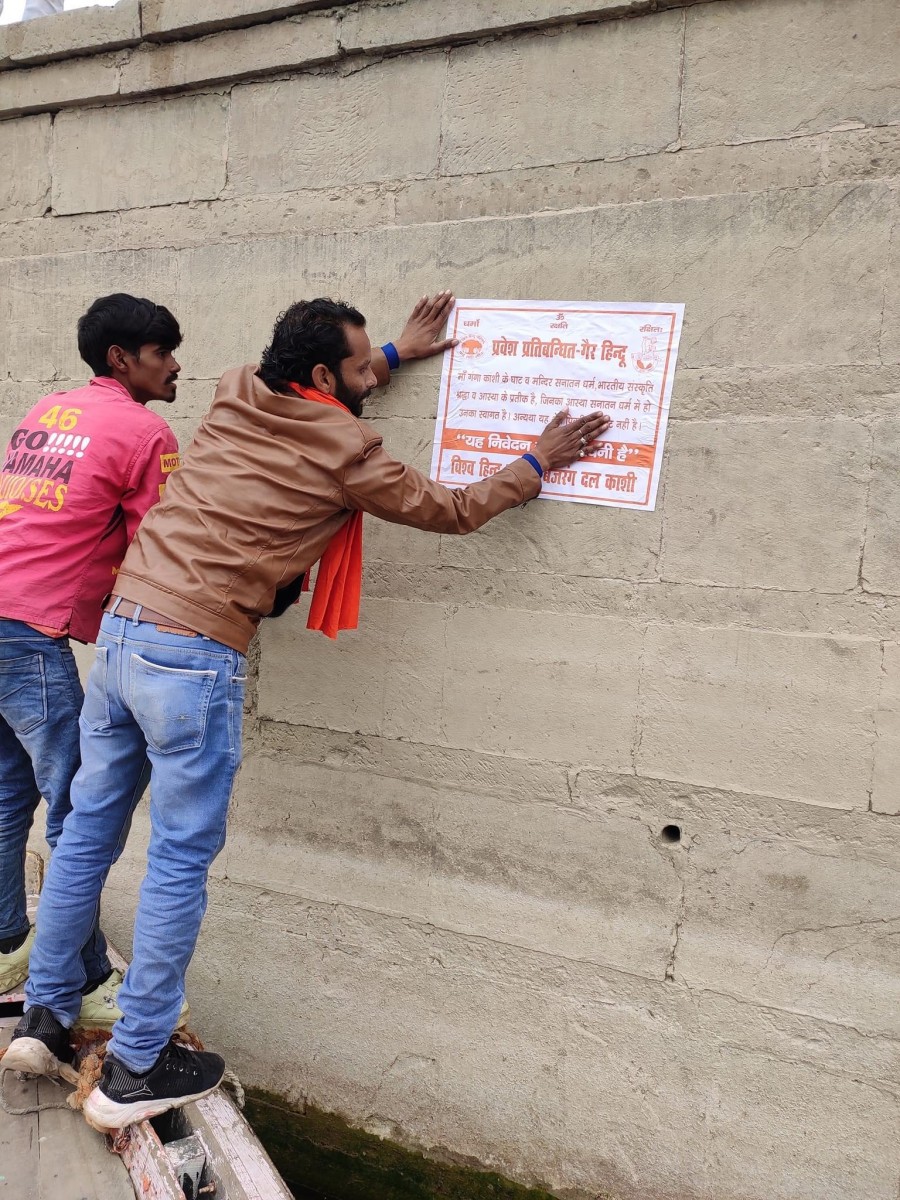 As the assembly elections in Uttar Pradesh near, many believe the Hindu right’s anti-minority campaign has been intensifying. Bharatiya Janata Party leaders – including chief minister Yogi Adityanath – have been accused of not just turning a blind eye to this campaign, but actively supporting it.

These posters appear to be part of a Hindu-led anti-minority campaign that has been going on in various parts of the country for the past few months. Many people believe that these posters, which are being erected in the context of Uttar Pradesh’s upcoming assembly elections, have political significance.

After putting up the poster at the ghats, they are also planning to put it up at the temples of Varanasi, where Prime Minister Modi recently inaugurated the Kashi Vishwanath Corridor. Hundreds of these posters have been put up on Panchganga Ghat, Ram Ghat, Dashashwamedh Ghat, Assi Ghat, and Manikarnika Ghat. In social media posts, leaders have said that similar posters will also be placed around Hindu temples in the city.

VHP’s Varanasi wing secretary, Rajan Gupta, has said that “these posters are not an appeal but a warning to those who are not followers of the Sanatana Dharma”. The ghats of the river Ganga and the temples of Kashi are symbols of the Hindu religion and culture, he continued, and others should stay away. Gupta went on to say that if visitors to these places have a faith in Hinduism, they are welcome, and if not, “we will send them away from our sacred places”.

Bajrang Dal’s Varanasi coordinator, Nikhil Tripathi ‘Rudr’, also used a similar rhetoric. “River Ganga is our mother, it is not a picnic spot. Those who consider the Ganga a picnic spot should stay away from it. If they do not, Bajrang Dal will make sure they do. ” 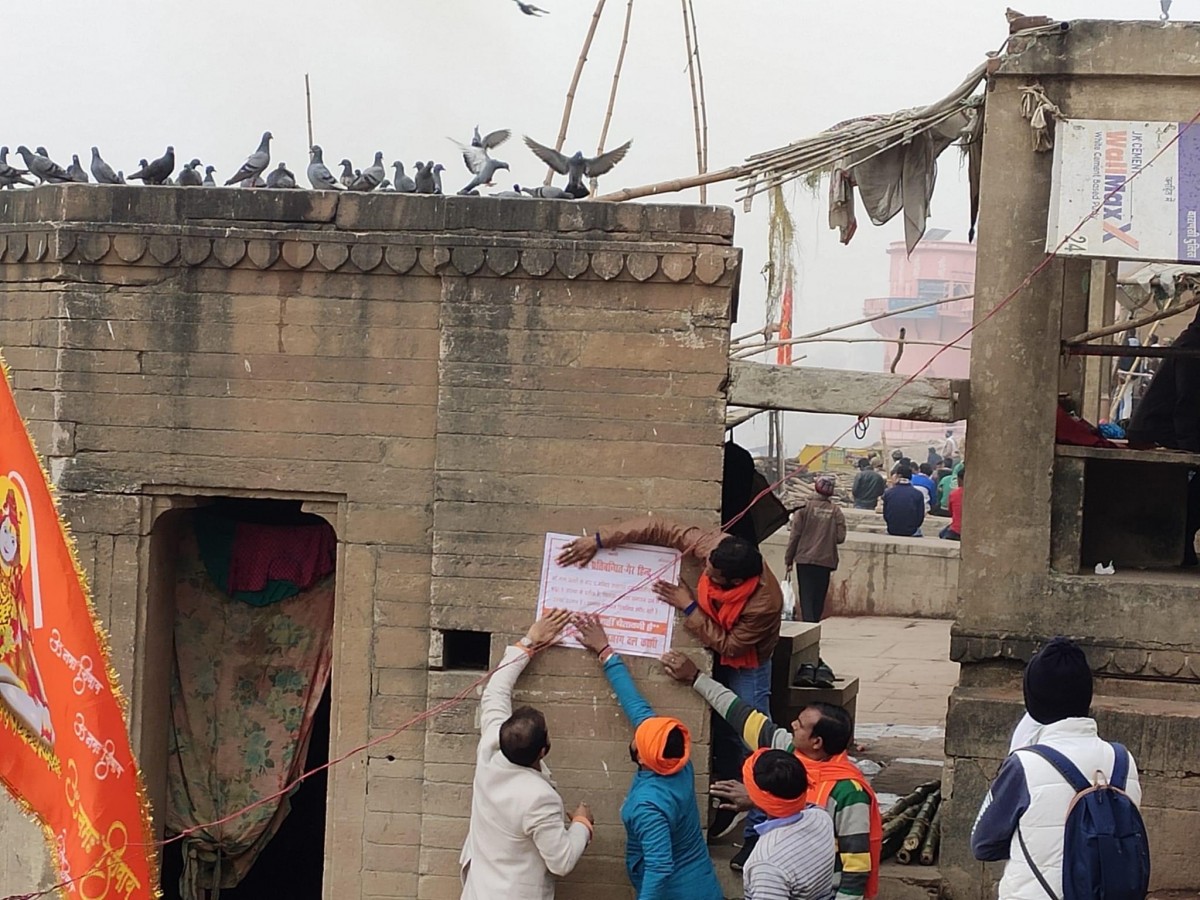 The Congress party saw this development as a well-orchestrated conspiracy by the BJP to polarise society further ahead of the assembly elections. Raghvendra Chaubey, a local Congress leader, told The Wire that his party informed the police about the “mischievous acts” of the right-wingers.

“I telephoned the DCP of Varuna Zone to inform him about the hate campaign that has been started in the town by saffron-clad youth,” Chaubey said. The Congress leader added that a delegation would meet the district authorities, as these types of acts can disturb peace and tranquillity and also influence the electoral atmosphere.

Also read: Suresh Chavhanke’s ‘Kill and Be Killed’ Oath and the Mystery of Shivaji’s Letter

A local political analyst opined that these hateful posters are an assault on Varanasi’s composite culture. Senior journalist Vijay Vineet told The Wire over the phone, “How can anyone divide Varanasi in the name of religion, to take political advantage?” 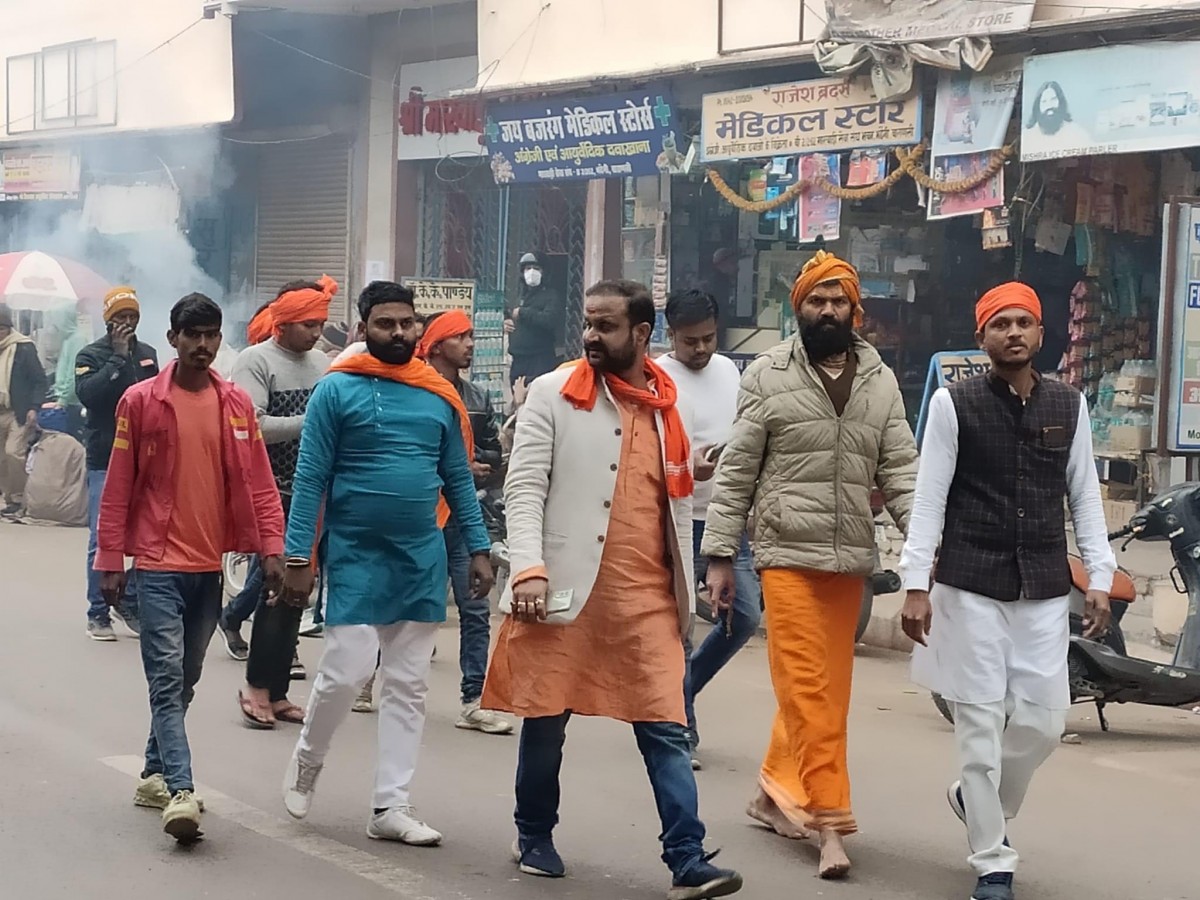 Members of the group putting up posters. Photo: Special arrangement

The Ganga and its ghats, Vineet continued, have never belonged to followers of one religion. He brought up how Bharat Ratna Ustad Bismillah Khan used to offer namaz after bathing in the Ganga. 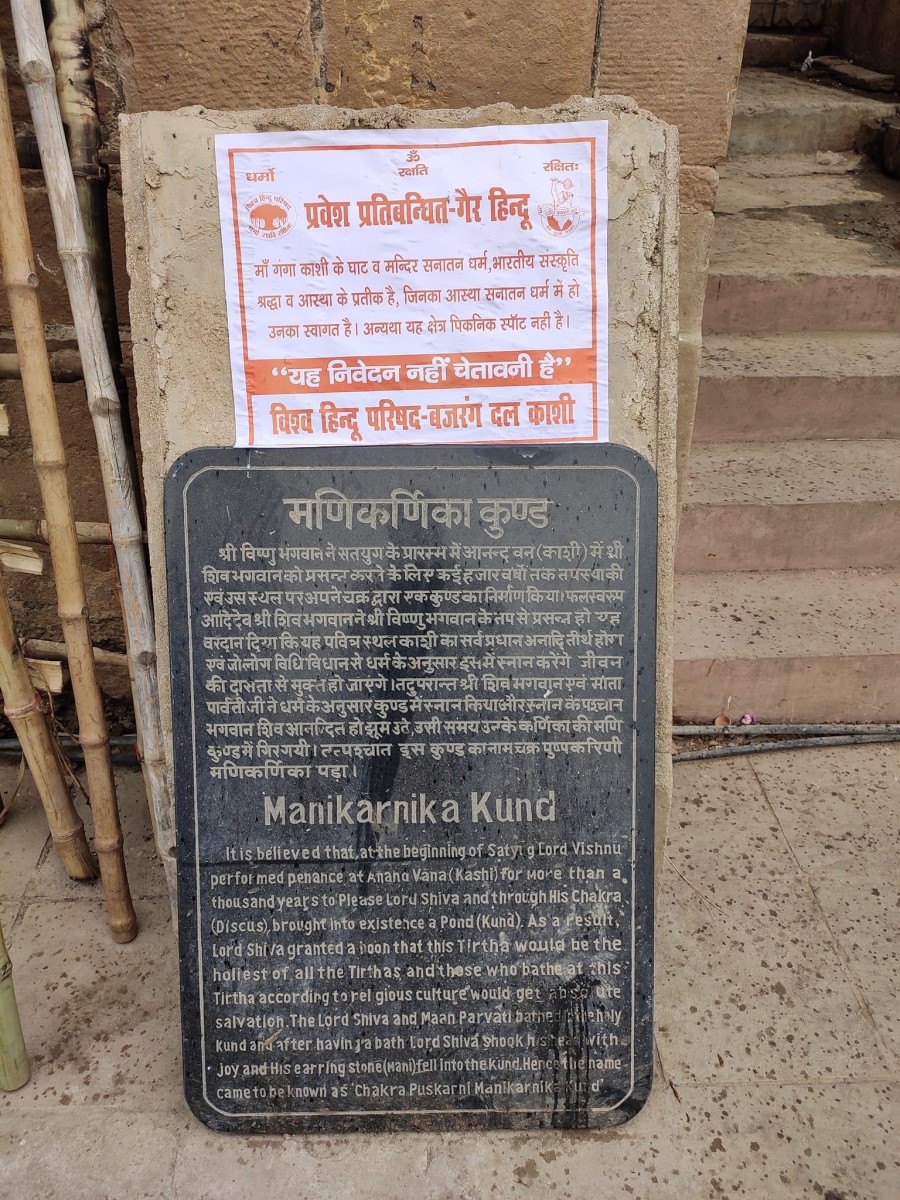 According to Vineet, who has written several books on Varanasi, “The real conspirator is the BJP. It wants to divide society on communal lines, as the saffron party’s prospects are very bleak this time in the crucial eastern UP area.”

The BJP, meanwhile, has claimed that the right-wing organisations cannot be held responsible for the incident. Party spokesperson Rakesh Tripathi gave a clean chit to the VHP and Bajrang Dal for putting up the controversial posters; he told the media that it had been done by some “mischievous people”. However, the posters carry the names of both organisations.

Tripathi partly endorsed the poster’s message, saying that the Ganga and temples of Varanasi are sacred places and should not be considered a picnic spot. However, he added that no one has the right to stop anyone from visiting these places.

The police have not taken any action so far against those who put up these posters, despite the photos available which show the faces of those involved. A staff member at the Varanasi DIG’s office said that information about the controversial posters had been given to top officials. The police had taken note of the matter, the staff member added, and action will be taken if required after a probe.