What Hemant Karkare's FIR on Malegaon Says About Hindutva Today

Two schools of Hindutva in India have converged.

Traditionally, the Hindu Mahasabha and RSS have represented two variants of Hindu nationalism. The former, under V.D. Savarkar, decided to contest elections and then to support terrorist groups like Godse’s Hindu Rashtra Dal, whereas the latter preferred to work at the grassroots level with a long-term perspective.

The career of Abhinav Bharat suggests that in spite of the differences, both schools of thought have converged, as evident from the fact that ex-AB members, Pragya Singh Thakur and Ramesh Upadhyaya, have been nominated to the Lok Sabha election by the BJP. This article, based on the FIR that Hemant Karkare had drafted in 2008, is made of excerpts from the author’s article Abhinav Bharat, the Malegaon blast and Hindu Nationalism: Resisting and Emulating Islamist Terrorism, published in the Economic and Political Weekly in September 2010.

Himani Savarkar, the daughter of Gopal Godse and the wife of Veer Savarkar’s nephew, claimed that Abhinav Bharat (AB) had been started by Sameer Kulkarni, who had asked her to be the chairman of the organisation. At that time, Himani was the president of the Hindu Mahasabha. She had had become a full-time worker in the party and returned to Poona after retiring in 2000 – till then she was an architect in Bombay.

She told the police that she was elected president of AB in April 2008 during a meeting in Bhopal. She also said that Madhya Pradesh was the place where Kulkarni was developing the organisation. This meeting was also attended by Swami Amritananda Dev Tirtha (a man also known under the names of Sudhakar Dwivedi and Dayanand Pandey, and whom she calls the “Jammu and Kashmir Shankaracharya”), Sadhvi Pragya Singh Thakur, Major Upadhyaya, Sudhakar Chaturvedi and Colonel Purohit whom, she said, she knew for two years, their two families being related for a long time.

According to others testimonies, the real architect of Abhinav Bharat was Purohit himself. He initiated the Abhinav Bharat Trust in June 2006 by taking about 16 people to Shivaji’s Fort in Raigarh. One of the participants remembers: “We took the blessings of Shivaji Maharaj’s throne and decided to name the trust Abhinav Bharat and prayed for its success”. The group then met on December 16, 2006 when the members celebrated the victory over Pakistan in the Bangladesh war. But the first official meeting of the Trust took place in February 2007 in Poona.

Another meeting, at least, took place in Deolali, in September 2007, again with Mumbai people and Purohit, but also, a new recruit, B.L. Sharma, the former BJP MP of East Delhi. Sharma, apparently, had met Amritananda Dev Tirtha in Delhi in 2004 while touring his constituency where he was popular among the Pandits refugees who had fled Kashmir. Responding to the police during his interrogation on December 26, 2008, he said: “…the Swami opened his laptop and showed us videos. They showed Muslims slitting the throat of Hindus.”

According to the police, the plot regarding Malegaon was decided and fine tuned during four meetings which all took place in 2008. On January 25-26, 2008, Purohit, Upadhyaya, Kulkarni, Chaturvedi and Amritananda Dev Tirtha met in Faridabad, where the latter was staying in a building of the Save Our Soul organisation. On April 11-12, 2008, the same people met with Pragya Singh Thakur in Bhopal and “conspired together to take revenge against Muslims in Malegaon by exploding a bomb at thickly populated area. Accused Purohit took the responsibility of providing explosives. Accused Pragyasingh Thakur took the responsibility of providing men for the explosion. In this meeting all the participants agreed and consented to commit the explosion at Maleagaon.” 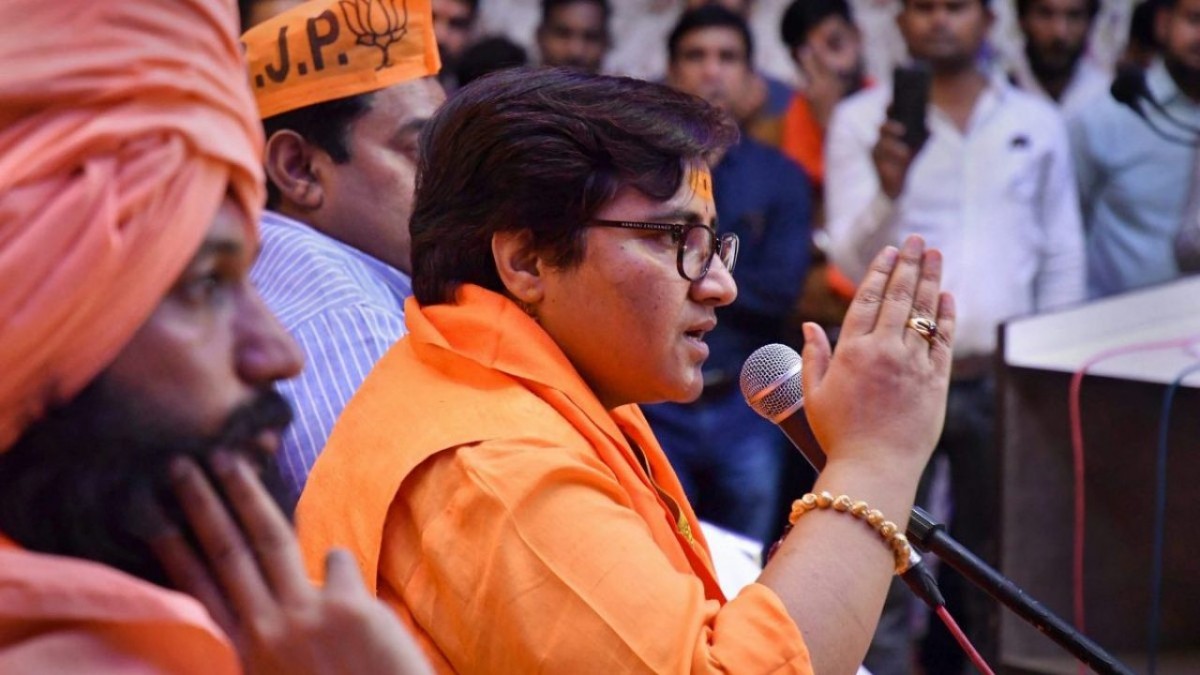 On August 3, 2008, in a meeting held at Dharmsala of Mahakaleshwar temple in Ujjain, Purohit was given the responsibility to procure RDX fro Kalasangra and Dange. Purohit then asked Rakesh Dhawade “a trained expert in committing explosions and assembling Improvised Explosive Devices” to provide explosives to Kalasangra and Dange at Ponna where they met on August 9 or 10.

Major Ramesh Upadhyay, a former defence services officer, was arrested first, and immediately admitted that he had taken part in three meetings with Pragya Singh and her accomplices on the Nasik BMS premises to plan the Malegaon blast. Ajay Misar, the public prosecutor, declared, “Upadhyay, who was posted in the artillery department while working with the Indian military, is suspected to have guided the arrested accused on how to assemble a bomb and procure RDX.” According to some press report, Ramesh Upadhyay was the acting president of AB when the president was none other than Himani Savarkar.

But the key figure of the group was another serviceman, Lt Col Prasad Purohit, who had approached Upadhyay when he was posted at Nasik as liaison officer. Purohit and Upadhyay imparted military training to young activists – including bomb making – and were instrumental in procuring arms and explosives. Purohit forged documents during his stint in Jammu and Kashmir – where he was posted in 2004-05 – to obtain arms licence for others.

After shifting to Panchmarhi (Madhya Pradesh) in July-August 2008, Purohit organised training camps in which 54 people took part and where they were taught the handling of arms and explosives. He had also organised similar camps in Pune. However, most of the training camps took place in the BMS, which had been directed between 1973 and 1988 by Rtd Major P.B. Kulkarni who had been associated with the RSS since 1935. In fact, the Bajrang Dal organised training camps in the BMS (Nagpur) as early as 2001. Two years later, the school started to provide firearm training to the students in the 10-15 age group.

Upadhyay once headed the BJP’s Mumbai unit of the party’s ex-servicemen cell. But he was not the only AB leader with strong Sangh parivar connections. Pragya Singh had been an ABVP leader in Ujjain and Indore until 1997, before becoming member of the National Executive of the ABVP and embracing sannyas. Even more importantly, Sameer Kulkarni, who had apparently initiated the Madhya Pradesh branch of the AB, was an RSS worker. During her interrogation by the police on December 26, 2008, Himani Savarkar said:

“I met Kulkari some 1 and a half years ago when he was working as a full time member of the RSS. Since my house is next to Savarkar’s, he would come often and I came to know him very well. Then he told me he would be in Madhya Pradesh to work for the Abhinav Bharat.”

The best example of the disillusioned Sangh parivar workers who had been attracted by the AB, however, is B.L. Sharma. An RSS worker since 1940, Sharma was seconded to the BJP by the Sangh during the Ramjanmabhoomi movement in which he was taking an active part on the VHP side. He won the Lok Sabha seat of East Delhi in 1991 and 1996 but resigned from his seat and from the BJP in 1997.

He then concentrated on VHP work as state secretary of the organisation but was obviously disappointed by the Sangh parivar’s work regarding the Akhand Bharat issue. He wrote a very telling letter to Advani on this question that he read out to the other AB people who took part in the Faridabad meeting in January 2008: “Akhand Hindustan was a lost phrase until Savarkarji revived and propagated it. But the Sangh kept this idea limited to itself. Jana Sangh adopted it but with the formation of BJP it was sidelined.”

In the long run, Purohit aspired to have the AB replacing the RSS by attracting his best people.

“When an organization gets ready with an ideology it is normally because of a single person’s leadership but soon after the exit of that person those who do not even have the same vision occupy that position of importance, which eventually leads to the downfall of the organization. In today’s date this is the situation of the Sangh Parivar. I said this once, that the day Abhinav Bharat will become strong I will eat it up. In army there are three steps which should also correspond to the growth of any organization: Raising: together, all five of us are involved in raising Abhinav Bharat. Similarly the Sangh, RSS was raised and mobilized. The third step of the army is to land the operation on the ground. RSS was raised and mobilized but could not be landed on the ground. Reason being the lack of leadership. Such a big Hindu organization, with so many principled and valuable people but just because of leadership their car wouldn’t be able to go further and this we wouldn’t be able to see, they will have to take a beating. We do not have so much time that first we get the men ready and then the men will get the organization going. It is advised to take men from there.”

The AB people have been in contact with several RSS top leaders, including “Mohan Bhagwaji”. But the component of the Sangh parivar they value the most is the VHP. Purohit has been in touch with Togadia, one of the VHP leaders from Gujarat. He suggested to him that the AB could organize bomb attacks and the Sangh parivar claims its responsibility for it. In the Faridabad meeting, he said: “I asked Praveen bhai [Togadia] that I would make the action happen but will you come forward to claim it? Will BJP come forward? He told me clearly that neither would come forward.”

The AB leaders have come to the conclusion that in the short run they could not expect anything from the Sangh parivar, even from the VHP which was forced to tone down its ideology by the rest of the organisation. But in the long term, they’ll be able to attract the VHP people in a big way. In the Faridabad meeting, Purohit said:

“The Vishwa Hindu Parishad has a different identity, a serious leadership of Praveen Togadia. Those who are talking about removing this leadership are saying this because of some a barrier within the BJP in today’s date, which is faulty for their political aims. The religious people in VHP are all ‘fighter people’. If and when Singhalji will be removed from VHP it will become a headless chicken. A body without a head will remain and this is what BJP wants. This wing should become ours. Do not oppose me on this. This will be our main weapon. This non-political organization will definitely turn into a political organization. Which means that BJP will be Shiv Sena at the national level and this is what is wanted.”