In the video, Madhu Sharma is seen to be pulling the Muslim man by his hair and slapping him. The only sentence the Muslim man is heard saying is, "Maine to dekha bhi nahi. (I didn't even notice.)"

Video grab from the viral video of a Hindutva leader, Madhu Sharma, assaulting a Muslim man, in a train. Photo: Facebook/Madhu Sharma

New Delhi: Hindutva leader Madhu Sharma, known as Maa Madhura, was seen assaulting a Muslim man in a train and made him touch her feet for allegedly pushing her while passing through the railway coach gallery.

In the video, Sharma is seen to be pulling the Muslim man by his hair and slapping him and does not let him speak. She threatened to take his life while forcefully asking him to touch her feet. “I will kill you. Touch my feet. (sic),” the woman is heard telling the Muslim man.

In the 41-second video, Sharma slapped the Muslim man over a dozen times and forced him to wear the skull cap while filming the act.

The only sentence that Muslim man is heard saying is, “Maine to dekha bhi nahi. (I didn’t even notice.)” He was trying to respond to Sharma’s allegation that he pushed her while crossing the alley.

The video was shared by Sharma on her Facebook page on October 18 (Monday). Facebook has put a “sensitive content” label on the video, but has still not made any effort to take action against it. On Twitter too, the video has been shared and glorified by a considerable number of right-wing influencers.

The video caption reads, “Friends, this is your Maa Madhura, thrashing a Jihadi snake because he had hit my shoulder while passing through the gallery. So, he had to face the consequences!”

Sharma is a disciple of far-right priest and militant Hindutva leader Yati Narsinghanand, who has described all of India’s Muslims as the ‘jihadist enemies’ of Hindus and that members of the community do not deserve the right to life. His role in stoking the violence that shook Northeast Delhi last year is well documented by The Wire.

She can also be seen with several BJP leaders like Kapil Mishra and Suraj Pal Amu.

Kapil Mishra’s speech, according to the Delhi Minorities Commission, led to the Northeast Delhi riots in February 2020. In 2017, Suraj Pal Amu, leader of the Karni Sena, had announced a bounty on Deepika Padukone’s head for Padmaavat’s release. He is currently Haryana BJP spokesperson and has made a series of incendiary communal speeches at mahapanchayats recently.

Sharma can be be seen with BJP leader Ashwini Upadhyay, who was arrested in connection with the raising of anti-Muslim slogans during a demonstration at the Jantar Mantar. Upadhyay had claimed the Delhi Police framed him, and was later granted bail. She can also be seen with Preet Singh, one of the organisers of the event at Jantar Mantar event, who is accused of creating enmity between different groups and inciting youth to propagate against a particular religion at the rally on August 8. 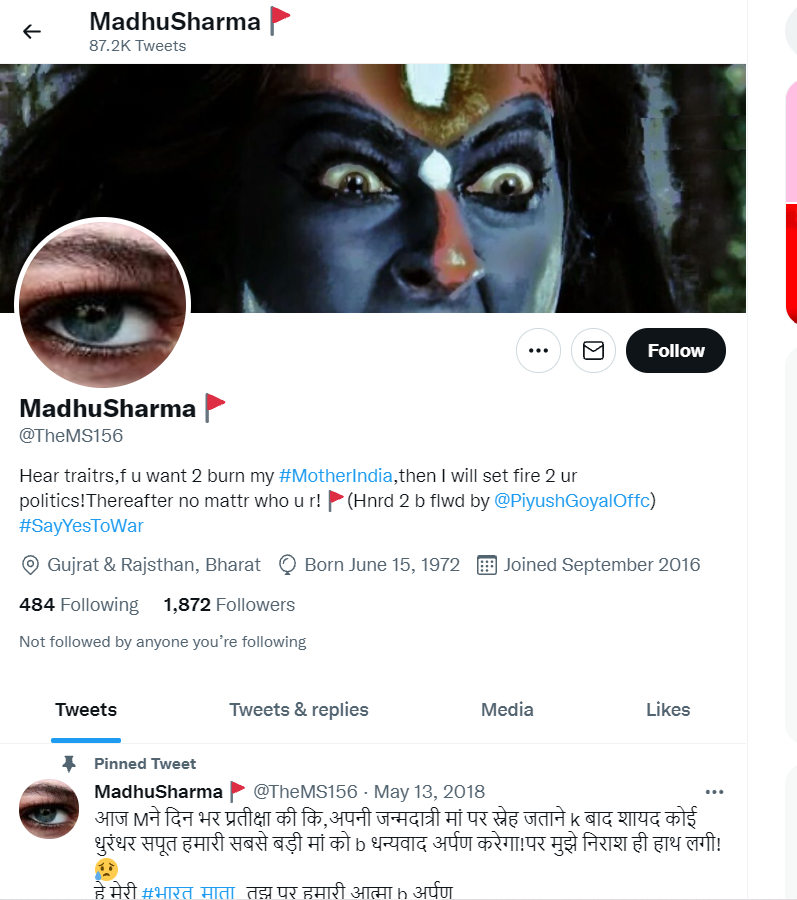 Sharma’s video was also shared and glorified by Sandeep Vasistha, national coordinator of the Rudra Sena, another right-wing group. The Wire reached out to Vasistha, who praised Sharma for attacking a man because he allegedly pushed her. He then made a straw man argument, asking, “If Muslims rape our [Hindu] sisters, then what else are we going to do, this is what will do. She did the right thing.”

Sharma had joined the Rudra Sena on September 7, according to the appointment letter shared on Facebook by Vashisht on October 18. When asked if he could share Sharma’s number for an interview, he said, “Hum beheno ka number nahi dete. (We don’t give phone numbers of women.)”

On August 29, Sharma shared a hate video calling Muslims Mlecchas — a word varyingly used to mean non-Vedic people or barbarians in Sanskrit that has become a derogatory term for Muslims used by far-right Hindutva leaders. In her video, she is instigating her audience to use violence (in the form of fear) against Muslims, and become a “Super Hindu”.

She claims to be the writer of Vande Gau Mataram WhatsApp messages, a series of viral far-right WhatsApp forwards glorifying communal hatred and anti-Muslim violence. In one such text posted on her Twitter account, she glorified the Jamia shooter — another disciple of Narsinghanand.

The Wire contacted the Railway Police and a divisional railway manager (DRM) of the Western Railways for their comments on the matter. The DRM’s phone was picked up by the officer on special duty, who said, “Since it’s still unclear in which train this incident took place, and we haven’t yet come across the video, we are not in the capacity to comment on this issue. If you could find out the details about the train and its location, then the officials of that particular region can help you with the details on whether a case has been filed or not.”

Similar acts of violent hate speech and physical assault against Muslims by other followers of Yati Narsinghanand have been extensively documented in a series of reports on the right-wing groups in Uttar Pradesh and NCR. The Wire has covered more than a dozen instances in which Narsinghanand’s followers have assaulted Muslims. However, they seem to invoke little, if any, action from the state or the Union government.

The Wire spent several months investigating Narsinghanand’s network. We managed to assemble several pieces of video evidence that link Narsinghanand and many of his followers to the anti-Muslim violence that took place in Northeast Delhi last year. The militant Hindutva leader had also used offensive language against Mohammad and Islam and called the former president of India, A.P.J. Abdul Kalam, a ‘jihadi’ and lamented the fact that India’s Muslims were not expelled or exterminated at the time of partition.

In March, a video of a 13-year-old Muslim boy being brutally assaulted for ‘trespassing’ in the Shiv Shakti Dham Dasna temple in Ghaziabad, Uttar Pradesh, had gone viral. Later, Narsinghanand, who is the priest of the temple, claimed that the boy was a ‘jihadi’ and a thief who had entered the temple to defile the idols and harass Hindu women. Later, the accused, Shringi Nandan Yadav, was not only praised by Narsinghanand but justified his actions in online interviews. In another video, Shringi Yadav can be seen intimidating the man with a deadly knife.

The Wire reported that Narsinghanand is somewhat of a serial offender. He has even earlier uploaded a video that records him attacking a young Muslim man he holds captive.

In April, a mob of Hindutva men vandalised a Sai Baba temple in Delhi’s Shahpur Jat. The main attacker, Padam Panwar, a south Delhi businessman, was reportedly inspired by Narsinghanand. Later, he also appeared in a video with Narsinghanand, who congratulated him for breaking the “jihadi’s idol” and said, “If I had my way, such ‘jihadis’ would never be allowed in our temples.”

A few months later, on August 18, various Hindutva groups vandalised a Muslim man’s dosa stall in Mathura’s Vikas market over naming the stall after Hindu Gods. The owner had to change the stall’s name from ‘Shrinath Dosa’ to ‘American Dosa Corner’.