The families of those killed by the police in Hashimpura in 1987 have waited 30 years for justice, but all they have been promised so far is compensation. 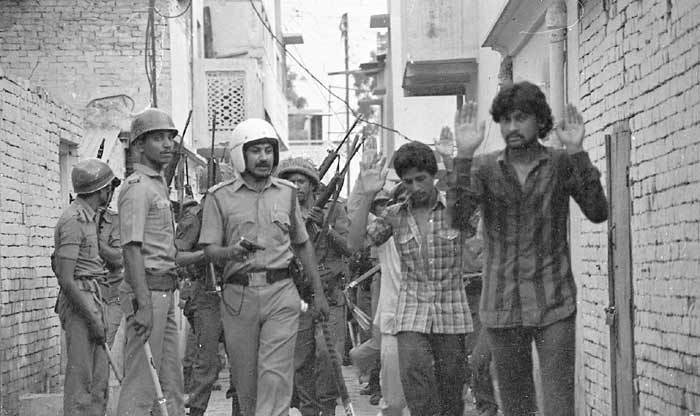 On May 22, 1987, India witnessed the worst case of custodial killings at Hashimpura. Credit: Praveen Jain

Hashimpura (Meerut)/New Delhi: An unnerving silence engulfed the locality as news of the acquittal of all surviving accused in the Hashimpura massacre by a trial court in Delhi came trickling in on March 21, 2015. “The silence was jarringly similar to the one that proceeded the massacre”, recalls Yaqoob Saifi, whose younger brother Mehtab was one of the 42 unarmed Muslim men who had allegedly been killed by the Uttar Pradesh Provincial Armed Constabulary (PAC) Force on May 22, 1987. “We were shocked and shattered by the verdict. We felt as if our family members had been killed again,” says Saifi, who is now in his early fifties. Like his brother, he was also picked up from the locality by the PAC, but was lucky to have been part of the group that was sent to the police line and eventually to jail, instead of where his brother was taken. He, thus, lives to witness the twists and turns that the judicial machinery throws at survivors.

“Thirty years have passed but it’s still very difficult to forget what we had to go through then,” he says, controlling his tears. They could not trace his brother’s dead body.

“My wife fainted when there was no trace of our son even after three days”, recounts Jaffer Saifi, Mehtab’s father, adding that “for many months, we kept thinking that he would come back again.” Like Yaqoob and Jaffer, there are dozens of families who have either lost their dear ones or had members who were beaten up badly and put in jail.

While acquitting all the accused, the court in its judgement noted that, “It is not clear from the record as to on what basis the names of the accused persons have been short listed.” In less than two months after the trial court’s verdict, the victims and the survivors filed an appeal before the Delhi high court arguing, “the judgement of the trial court is contrary to law and the facts on record.” Presenting grounds of appeal, the appellants, through their lawyer Rebecca John contended that, “while passing the impugned judgement, the trial court has mis-appreciated critical pieces of evidence, and consequently, the impugned judgement is liable to be set aside.”

It has been two years since the appeal was filed but the high court is yet to start hearing the matter and examine the merits of the judgement, as well as the points raised by the victims. Meanwhile, the court had on October 6, 2016, ordered additional compensation for the 40 identified as deceased and the five survivors. While the family members of those killed have received cash in the form of ex-gratia and compensation from the state government earlier, this is the first time that the survivors have been granted compensation. Some of the survivors had already received a compensation of Rs 1 lakh.

“With the compensation money, I have started a business of selling cloths in weekly markets since my earlier business was ruined following involvement in the litigation and campaign for all these years,” says Mohammad Naeem, who is one of the five survivors. He looks happy and thankful. But it wasn’t a very easy battle for him. Even after the court order, they had to face red-tapism and hostility from the local administration. In fact, the family members of the deceased are yet to receive the additional compensation of Rs 2 lakhs per person. “We have submitted all the required documents but don’t know when we are going to receive the money,” says Zareena whose husband and son were killed in the massacre. The Uttar Pradesh state government has to file the compliance report on July 13, which is also the next hearing of the case. Before that, the state has to disburse compensation to all the victims.

However, not everyone is happy with compensation alone. “Mere compensation is not enough, we want punishment for those responsible for the crime. Until and unless that is ensured, we will not rest,” insists a 72-year-old Hajara whose son was killed in the massacre. Zareena, who is sitting next to her nods in agreement. “They should be hanged,” adds the agitated Hajara. Expressing her dismay she explains how only they know of what they had to go through in the last 30 years. “In all these years, we have spent a lot of money despite being daily wage laborers. We are under debt. This is all for the sake of justice,” she asserts.

Naeem is hopeful that justice will prevail one day. “As a citizen of this country, I have full faith that justice will be delivered and those responsible for the heinous crime will be punished for it one day. If not by the high court then at least by the Supreme Court,” he says adding, “even if the judiciary fails, as a Muslim, I believe that Allah will grant justice on the day of judgment in the life hereafter.” He also says that those killed in the massacre are martyrs. Both Zareena and Hajra agree fervently to this.

Human rights lawyer and activist Vrinda Grover, who has been associated with this case as the victims’ lawyer for over a decade now says, “This is not an ordinary criminal case. There was a nexus between the state and those responsible for the crime”. Grover, who is currently representing the National Human Rights Commission (NHRC) in this case states, “until and unless we contextualise the crime and the state’s role in the crime is not taken into consideration, it is almost difficult to deliver justice in cases like this.” To illustrate her point, she cites the case of Bilkis Bano. “In Bilkis’s case, justice was ensured because the case was contextualised and the court recognised the deliberate delay on the police’s part in registering the FIR.”

“In a similar manner, the court has to recognise the role of the state apparatus in the Hashimpura case and its aftermath, which led to the subversion of the process of justice,” says Grover. “There is a high chance of not just tampering with the evidence but also to discard and eliminate the evidence,” she adds. Therefore, she is of the view that a special set of guidelines for investigation should be laid out for the case in which the state is the prime party to communal and custodial killings. Appellants’ lawyer John, in her appeal, has also requested the Delhi high court for the same. “Hon’ble court lay down enforceable guidelines for investigation of custodial killings to be mandatory followed by the investigating agencies in the case of such offences…,” reads the appeal petition.

Like Naeem, Grover is also hopeful that sooner or later justice will prevail in the matter. Also, because recently, with the intervention of the NHRC, she has got hold of some new documents, which she believes can lead to conclusive evidence for the case. Thirty years have already passed and all the victims of Hashimpura have got is compensation. They are still waiting for justice. In the coming months and years, it will be interesting to see where the case goes. Only time will tell if the victims will get justice in court or in the afterlife.

Mahtab Alam is an activist-turned-journalist and writer. He writes on issues related to politics, law, literature and human rights, and tweets @MahtabNama