At the largest mahapanchayat, in Indri village, about 50,000 people were reportedly present despite the ongoing lockdown in the state. 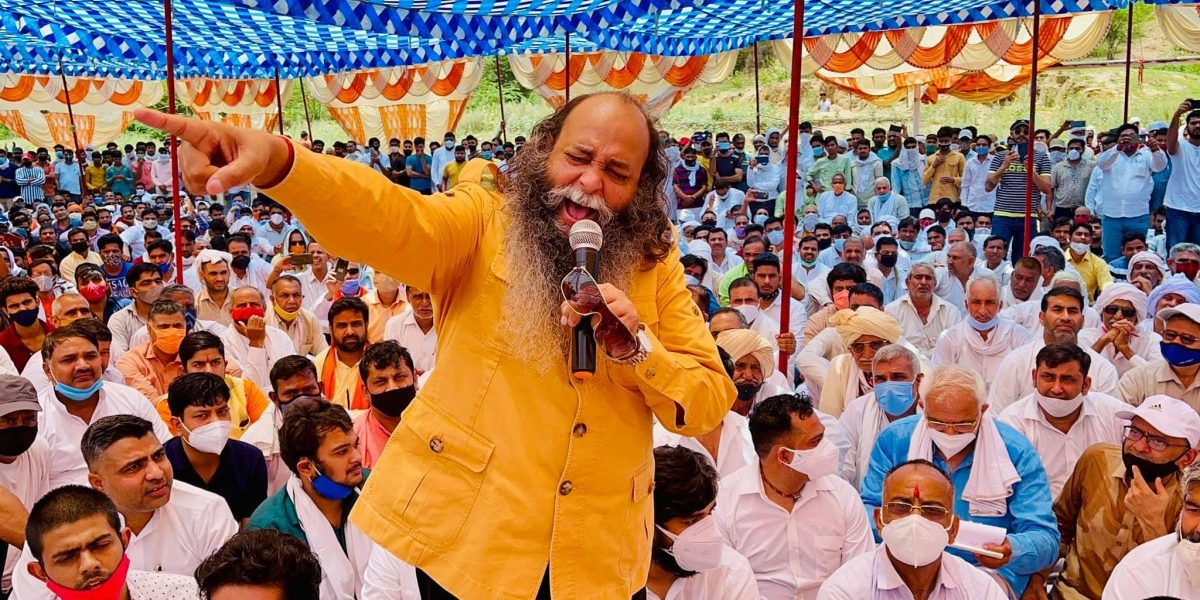 New Delhi: Despite the COVID-19 lockdown in the state, mahapanchayats were held in multiple Haryana villages in support of those arrested for lynching a Muslim man, Asif Khan.

Before the big mahapanchayat in Indri, smaller ones had been held in other villages. One mahapanchayat was held in the Kira village of Nuh tehsil; another was in Badoli village of Faridabad district. In these small mahapanchayats, people were informed about the planned event in Indri.

All these mahapanchayats were held to demand the release those arrested for the Asif’s murder, with attendees claiming the accused are “innocent”. Asif, a 27-year-old gym trainer and resident of Khalilpur Kheda, was lynched by a group of people on May 16 when he and his cousin Rashid were going to buy medicines in Sohna. Rashid escaped after being beaten up, and later told the media that the mob was asking him to chant ‘Jai Shri Ram’ and talking about killing all Muslims. Asif’s family members said that it was a lynching, but the police maintained that Khan was murdered due to personal animosity.

“Such hateful speeches have created fear in the Mewat region and its surrounding and put the relations of Hindu and Muslims, who are living in harmony for centuries, at risk. The above mentioned speakers have organised the mahapanchayat against Muslim society as part of a planned conspiracy at a time when Section 144 was imposed by the Haryana police. By holding the panchayat, these above-mentioned people have broken laws,” said Tauqeer in the complaint.

He requested the police to take action against those who are involved in the mahapanchayat and arrest the main accused in Asif’s murder. “Patwari, Advani, Nathu, Balla, Kala are the main accused who are absconding. Arrest them as soon as possible and prevent such incidents from happening,” he said in the complaint. Isha Khan, Asif’s cousin, told The Wire that they lodged a complaint after they saw videos in which the mahapanchayat attendees were abusing Muslims. He said that an FIR was lodged on the basis of their complaint.

Isha also shared a video clip which shows some people abusing and threatening Muslims while talking to a local reporter. In the video, one Bittu Bajrangi called Muslims ‘pigs’ and himself ‘jihadiyon ka jija (brother-in-law of jihadis). “This Indri panchayat is a small panchayat. If any Muslim troubles my Hindu brothers, then people from the whole country will gather in this village. At present, only people from Delhi NCR have gathered…The people who killed Asif to send him to 72 hoors have done a good job. We stand with their families,” said Bittu, who came from Faridabad.

Karni Sena president Suraj Pal Amu too posted a video of the speech he gave in Indri, supporting those who killed Asif. Before starting his speech, Amu asked the attendees if they were all “true Hindus” or whether any “Pakistan ki aulad (child of Pakistan)” was in the crowd.

“Asif was killed by neither Patwari nor Advani. He was murdered because of his deeds. Everyone should have the courage to say this. Catch the culprits and release the innocents. We are not culprits. Our children are not culprits. They click nude pictures of our mothers and sisters, we can’t even murder them…We will shoot them let’s see who has drunk milk of his mother to stop us…It is said that Hindu-Muslims are brothers. Whose brothers? These people are butchers,” thundered Amu, while levelling unsubstantiated allegations against Muslim community.

When Amu was contacted by The Wire to ask about the mahapanchayat, he refused to talk about it. He said he was not the organiser but was invited to address the mahapanchayat, so he went to attend it. “It’s my right. If you would invite me, I would also go there,” he said.

Hindutva outfit Bharat Mata Vahini’s chief Dinesh Thakur is also demanding the release of the accused, and even took out a rally to this effect. He posted a video of his rally on May 27 on the Vahini’s Facebook.

Thakur also attended the Indri mahapanchayat. Talking to a reporter, he levelled unsubstantiated allegations against Asif and warned AIMIM chief Asaduddin Owaisi against visiting Mewat. If Owaisi visits Mewat, “I will welcome him with shoes and chappals,” Thakur said. His organisation, he continued, works wherever Muslims are in the majority.

When The Wire asked about his demand to release the accused, he said, “I just demand a fair probe into the incident. The one who was killed was not an honest man. Why did this incident happen and how did this clash happen? It’s also a matter of investigation that Asif used to make obscene viral videos.”

He claimed that the mahapanchyat was organised to demand the release of innocent people; it never said that the culprits should not be punished.

When asked about the mahapanchayat’s organiser, he said, “I don’t know about the organiser. People from all biradaris and parties are in this panchayat.”

Sunil, district president of the BJP’s IT cell in Palwal, also posted photos of a mahapanchayat held in Basalat, saying that people from 36 biradaris in 40 villages participated. In the Basalat panchayat, attendees had decided to turn up in large numbers at the Indri mahapanchayat.

When Mewat SP Narendra Bijarniya was asked by The Wire about the mahapanchyat being held in support of the accused, he did not comment. With regard to the arrests and investigation, he said the police is putting out information through official press notes. “Let them demand what they do. The investigation will take its own course,” he said.