Many Times Over, Haryana's BJP Govt Has Shown it Stands With the Extremist Hindu Right

From disallowing namaz in public spaces to not acting against – or even supporting – those who deliver hate speeches, Manohar Lal Khattar's government has a lot to answer for. 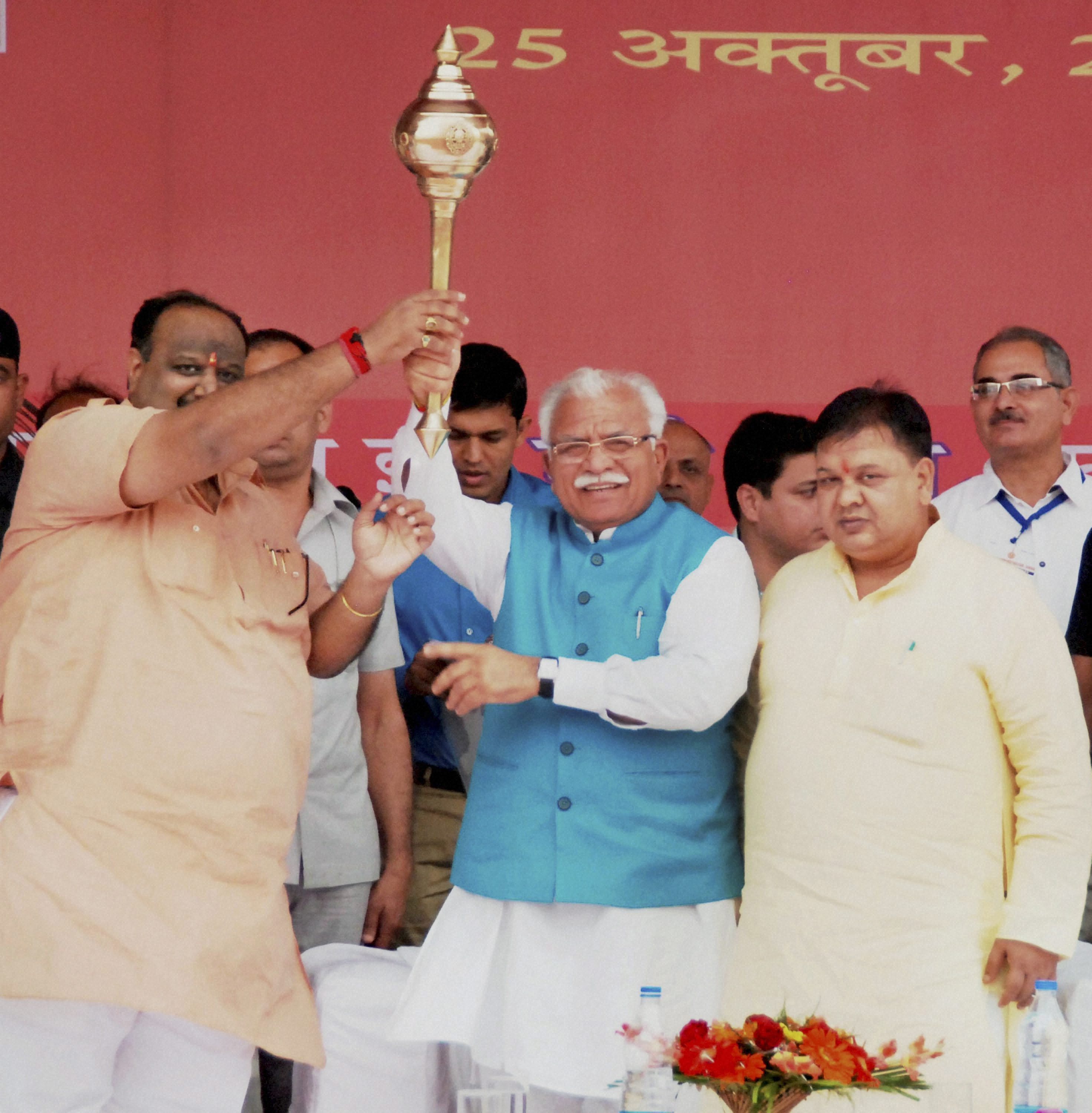 Haryana Chief Minister Manohar Lal Khattar raising a mace at a function to commemorate the first anniversary of the state government in Sirsa on October 24. Credit: PTI

New Delhi: Over the past two years, politics around religion in Haryana has been becoming increasingly violent.

While socio-religious groups have organised mahapanchayats in support of those accused of lynching, objected to namaz in open spaces and supported the calls for making India a “Hindu rashtra (nation)”, the Bharatiya Janata Party-led state government has played along. It has withdrawn agreements for allowing prayers in open spaces and passed an anti-conversion legislation after demands were made by its leaders to check “love jihad” – a bogey use to stop inter-faith marriages involving Muslim men.

While Muslim legislators in the state have called upon chief minister Manohar Lal Khattar to protect the secular fabric by clamping down on extremists, these demands have largely gone unnoticed.

The line between BJP’s politics and that of the hardcore Hindutva leaders appears to be blurring at a rapid pace. While several party leaders at the national level have tried to give the impression that they are not in sync with the demands raised by the extremists, recent developments in Haryana prove otherwise.

Earlier this week, the BJP MLA from Ambala, Aseem Goel, took an oath to make India a “Hindu rashtra” and even vowed to “make or take sacrifice for it” at an event that was attended, among others, by Suresh Chavhanke of Sudarshan News, who is facing trial in a hate speech case in Delhi.

Podcast: India Might Be Entering the Stage of Pogroms Now

The event, as per media reports, was organised by the Samajik Chetna Sangathan on the issue of a Uniform Civil Code, but Goel used it to take an oath, which was administered by Chavanke, and in which people were heard repeating: “We pledge to make Hindustan a Hindu rashtra, let it be a Hindu rashtra and take it forward. If needed, we will make or take sacrifice for it but at any cost, we will declare Hindustan as Hindu rashtra. May our deities and ancestors give us strength to achieve this goal.”

Clearly, the oath went against the secular principles espoused by the country. However, Goel later told the media that he took the oath “as a Hindu” and not as a BJP legislator and that he was “proud to be a Hindu”.

At a time when Haryana has witnessed multiple instances of right-wing groups trying to impose their writ on the minorities, such events pose questions on whether the ruling government and its legislators’s intentions.

Early last year, several mahapanchayats were organised in the state to support those arresting for lynching a Muslim man, Asif Khan, where hate speeches were alleged to have been made. In Mewat, police complaints were filed alleging that calls were given at these events to instigate riots and to target the Muslim society.

Then in several parts of the state, an in particular Gurugram, the issue of holding namaz in open spaces was stoked by the right-wing and found support from several BJP leaders.

Among the first to speak on the issue was Haryana minister Anil Vij, who insisted that religious activities should be organised within the premises of religious places and not on roads or public places, unless permission is obtained for them.

His statement at the time of the raging namaz controversy showed the government’s open support for the demands raised by Hindutva groups who had been campaigning against namaz in open spaces, despite the fact that there were only 19 mosques and eidgahs in Gurugram district, of which most had been encroached upon. Following start of protests in 2018, the administration had designated 37 sites for namaz but even these were opposed by the Hindutva groups, some of whom launched direct action to prevent the conduct of prayers.

And then, instead of taking a neutral stance, the Khattar government late last year withdrew its order that allowed Muslims to offer Friday prayers on government-allocated land. The chief minister went ahead and urged Muslims not to offer prayers in open spaces in Gurugram. Defending his action, Khattar had stated that Gurugram administration would renegotiate with all involved parties to work out an “amicable” resolution to the problem.

Also read: Modi Will Be the Only Loser in the Game of Communal Polarisation from Jahangirpuri to Jodhpur

At the time, it was felt that his supporting the demands of the Hindutva elements would further embolden the forces that have been trying to alienate Muslims from the mainstream polity and economy.

Following Khattar’s remarks, two Congress MLAs, Maman Khan and Mohammad Iliyas Khan had urged him to protect the minorities in the state.

They took exception to the chief minister’s remarks. Ilyas was quoted as saying in the Haryana Assembly that “Hum Hindustani the, Hindustani hai aur Hindustani rahenge (We were Indian, we are Indians and we will remain Indians) . Government should protect our freedom of religion. Statement made by CM was not appreciable. He should ensure our security and minorities should be allowed to offer prayers in Gurugram and other places as well.”

He had also recalled how at the time of Partition, senior national leaders had urged the large number of Muslims living in the Mewat region to not leave for Pakistan. Along with Maman, he urged Khattar to “not divide the state on the basis of religion”.

Earlier this year, the Haryana government once again showed which side of the fence it was when in the wake of demand from several of its leaders, it tabled the Prevention of Unlawful Conversion of Religion Bill in the Assembly. Prior to Haryana, 10 other states – most of them BJP-ruled – had brought in similar legislations.

In November 2020, Vij had announced that the state government would be setting up a three-member committee to draft a bill against ‘love jihad’.

However, as the deputy chief minister and leader of alliance partner Jannayak Janata Party, Dushyant Chautala, had last year stated that his party would not back a bill which carries the term “love jihad” in it, the government brought the Bill without using it.

But a month prior to the introduction of the legislation, Vij had without naming any religion stated in a meeting of the “drafting committee” that the “enactment of this law will prevent any attempt to get religious conversion by force, inducement, bluff of marriage or by any other unethical methods by anyone in the state” and that “strict action will be taken against the culprits”. Who the government perceived the `culprits’ to be was made clear.