Haryana CM Manohal Lal Khattar has claimed that “there is no mention of any religion in the bill" and that its purpose is to stop forcible conversions. Opposition politicians have claimed this is little more than divisive politics. 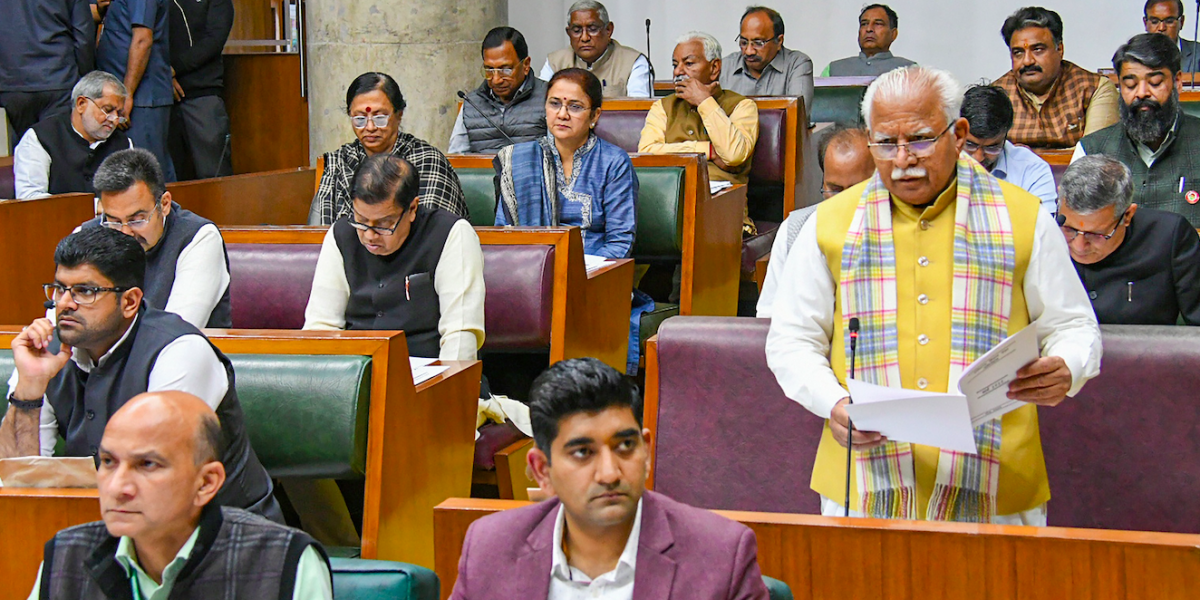 New Delhi: The Bharatiya Janata Party-led Haryana government on Friday, March 4, introduced an ‘anti-conversion’ Bill in the state assembly, becoming the 11th state in the country to bring such a law.

The Prevention of Unlawful Conversion of Religion Bill was introduced in the House by Haryana home minister Anil Vij.

‘Freedom of religion’ or ‘anti-conversion’ laws are dubbed ‘love jihad’ laws. In November 2020, Vij had announced that the state government would be setting up a three-member committee to draft a bill against ‘love jihad’.

Last year, the inclusion of the term ‘love jihad’ in the Bill had led to disturbance in Haryana’s ruling coalition, with deputy chief minister Dushyant Chautala saying that his party would not back a bill which carries the term in it, causing Vij to declare that the term would not be present in the Bill.

The term is popularised by the Sangh Parivar and the laws made invoking it attempt to offer legal credence to rightwing Hindutva’s unfounded claim that there is a conspiracy among Muslim men to convert Hindu women through marriage. The Union home ministry has earlier said it has no data on such cases and in the 10 states where this law has been brought recently, reports have it that it has affected women’s freedom in various ways.

Then last month, while presiding over a meeting of the “drafting committee”, Vij had stated that the “enactment of this law will prevent any attempt to get religious conversion by force, inducement, bluff of marriage or by any other unethical methods by anyone in the state” and that “strict action will be taken against the culprits”.

‘No mention of religion’

According to the tabled Bill, the onus of proof lies with the accused.

If conversion is done by allurement, use of force, fraudulent means or coercion, then there is a provision for imprisonment of one to five years and a fine of not less than Rs 1 lakh.

However, Haryana chief minister Manohal Lal Khattar appeared to soften the government’s stance on the issue by stating that “there is no mention of any religion in the bill. The purpose is to stop forcible conversions. No person shall be allowed to use coercion, threat or marriage as a means to convert people.”

He said the Bill – which prohibits “religious conversions through misrepresentation, force, undue influence, coercion, allurement or by any fraudulent means or by marriage, by making these actions an offence” – was not designed to discriminate against any religion and only deals with forcible conversions.

“If a person wants to change religion at will, then its provision is written in the Bill,” he added.

The Bill provides for declaring marriages, which were done solely for the purpose of conversion from one religion to another religion, null and void.

If religion is concealed with an intention to marry, then the person shall be punished with imprisonment of three years to 10 years and shall also be liable to pay a fine, which shall not be less than Rs 3 lakh, according to the Bill.

The mass conversion, contravening to the provisions, shall be punished with the imprisonment for a term which shall not be less than five years, which may extend to 10 years, and shall also be liable to pay a fine not less than Rs 4 lakh, as per the Bill.

However, the Congress has decried the move. In the absence of Leader of Opposition Bhupinder Singh Hooda in the House, party MLA Raghuvir Singh Kadian charged that by bringing the legislation, the BJP had shown that it indulges in “divisive politics”.

He also tore apart a copy of the Bill for which he was suspended from the House by the Speaker. All Congress legislators then walked out in protest.

Prior to Haryana, 10 other states – most of them BJP-ruled – had brought in similar legislations. These states are Karnataka, Uttar Pradesh, Gujarat, Chhattisgarh, Odisha, Madhya Pradesh, Arunachal Pradesh, Uttarakhand and Jharkhand. Many of these laws have also been challenged in courts.

The Gujarat Freedom of Religion Act was enacted in 2003 when Prime Minister Narendra Modi was the chief minister. The state government last year brought in an amendment to the Act, titled The Gujarat Freedom of Religion (Amendment) Act, 2021, which sought to bring the existing law in line with several similar laws enacted by other BJP-ruled states, including Uttar Pradesh, Madhya Pradesh and Himachal Pradesh.

The amendments sought to seek an end to conversions through unlawful means and provided for prohibiting any conversion for marriage, even if it was with the consent of the individual, except when prior sanction was obtained from the state. The 2021 amendments also shifted the onus of proof of a lawful religious conversion from the converted to his/her partner.

The Act also gave powers to the state government to conduct a police inquiry to verify the intentions of the parties to convert for the purposes of marriage.

In August last year, the Gujarat high court stayed the operation of several sections of this amendment Act including the provision that termed interfaith marriages as means for forceful conversion.

A Division Bench of Chief Justice Vikram Nath and Justice Biren Vaishnav granted interim stay on certain provisions of the amendment, while observing that “prima-facie inter-faith marriages between two consenting adults by operation of the provisions of Section 3 of the 2003 Act interferes with the intricacies of marriage including the right to the choice of an individual, thereby infringing Article 21 of the Constitution Of India”.

The Gujarat government appealed to the Supreme Court. It argued that the apex court has in the past ruled that “there is no fundamental right of any person to convert another person to one’s own religion because if a person purposely undertakes the conversion of another person to his religion, as distinguished from his effort to transmit or spread the tenets of his religion, that would impinge on the ‘freedom of conscience’ guaranteed to all the citizens of the country alike.”

The apex court had subsequently issued a notice in the matter.