Their versions also indicated that the Hapur police may have deliberately misled the family members to sign on the FIR that claimed the attack on Qasim and Samiuddin was a case of road rage. 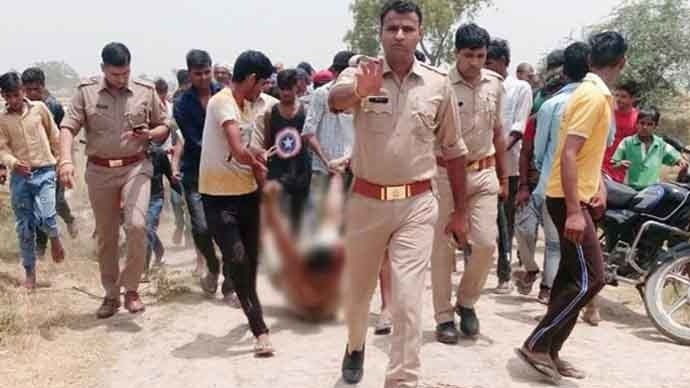 New Delhi: Three days after the 45-year-old cattle trader, Qasim, was lynched to death and the 65-year-old farmer Samiuddin was brutally beaten by a mob in Hapur, Uttar Pradesh, the members of their families narrated the sequence of the events that led to the mob attack, strengthening the widespread perception that the violence may have been pre-planned. Their versions also indicated that the Hapur police may have deliberately misled the family members to sign on the FIR that claimed the attack on Qasim and Samiuddin was a case of road rage.

The lynching of Qasim took place on June 18 at Bajhera Khurd village in Hapur district in broad daylight. Samiuddin, who was working on his farm, tried to intervene and stop the violence but the mob did not spare him too. Currently, he is the ICU of a hospital in Hapur. Videos of the violence have gone viral on social media. The videos clearly shows that the attack was carried out as part of the infamous cow protection campaign run by the Hindu Right.

As Qasim was attacked, several minor boys, who formed the mob, kept abusing him for being a Muslim and indulging in cattle slaughter. But the FIR, which was lodged later, and bore the signature of one of Samiuddin’s brothers as the complainant and one of Qasim’s brothers as a witness, made the case as one of road rage.

The discrepancy in the FIR was highlighted by many speakers at a press conference, organised by a civil society group, United Against Hate, in New Delhi. “My brother was a cattle trader. He used to buy cattle from different villages and then sold it in weekly cattle markets in the area. He got a call from someone about one such possible purchase at around 11:30 am. He rushed to buy it with around Rs50,000,” Qasim’s brother, Nadeem, said. “Then, our family was informed by the police at around 3:30 that my brother was admitted in a hospital as there was a fight between him and some people. The police asked us to come to the police station. They kept us waiting until 6:30 pm before we were told that Qasim was admitted in Nandini Hospital,” he added. He further said his family could only see Qasim’s dead body at the hospital and that only Rs 14,000 was found in his pocket when he saw his dead body at the hospital. 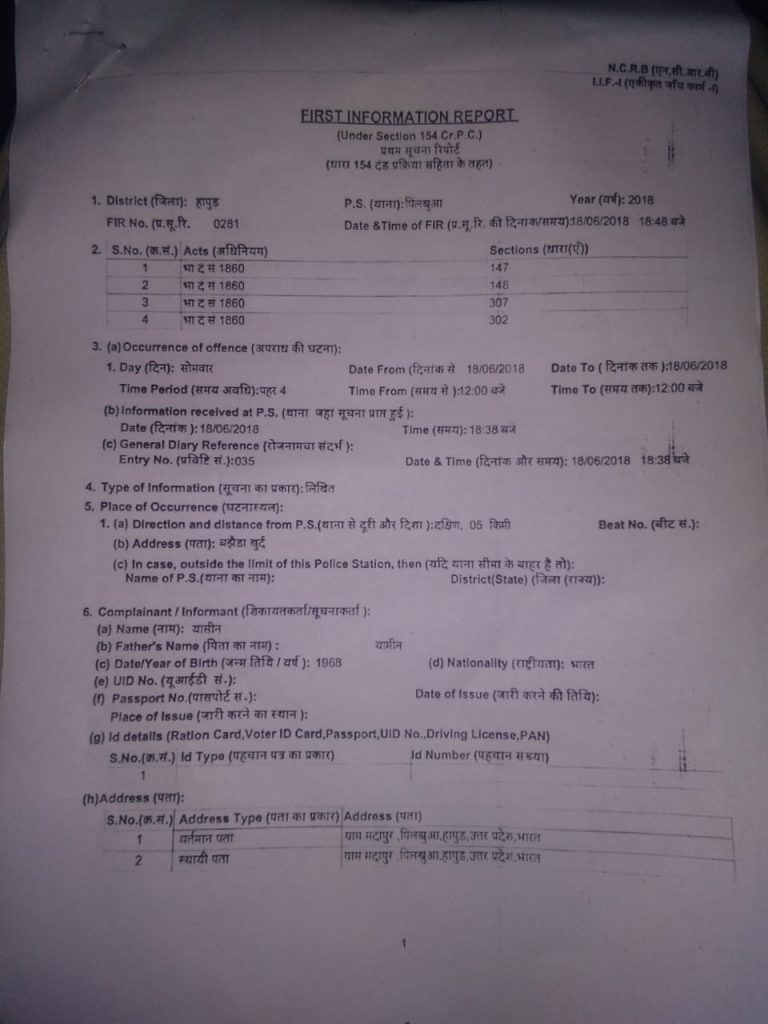 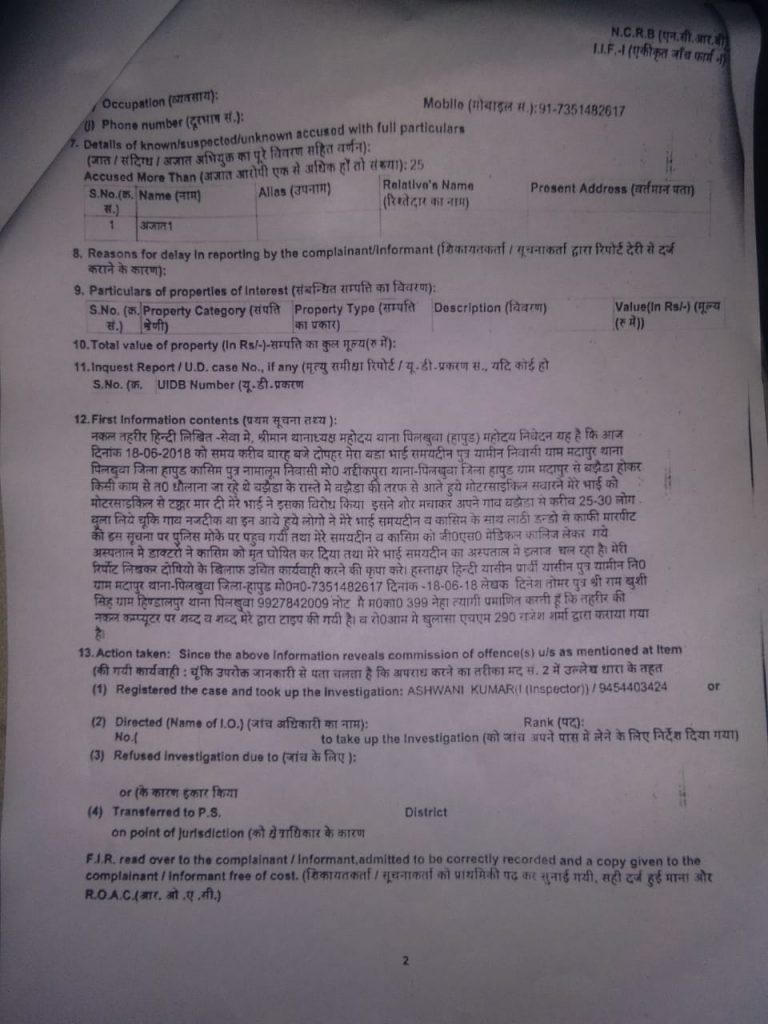 Similarly, Samiuddin’s brother, Mehruddin, too said, “My brother had gone to our farm to collect fodder for our cattle. When he saw a mob of around four-five boys beating up one person, he tried to intervene, but got brutally attacked as around 35-40 men had gathered by then. We were informed by the police at around 3:30 pm that he has been admitted to the hospital but were not allowed to meet him until 6:30 pm despite our constant requests. There is no part of his body which is not injured. He has multiple fractures and deep bruises.”

It is between 3:30 pm and 6:30 pm, Nadeem Khan of United Against Hate told The Wire, that the police insisted Samiuddin’s family to sign on the FIR that was already written by someone. “Only after signing on the FIR, were they told about the whereabouts of the two. When they reached, Qasim was already dead and Samiuddin injured.

This was confirmed by family members of Qasim and Samiuddin but they added the police has told them that they would follow up the case rigorously. “We do not know the legal procedures but all we want is justice. The culprits to be punished immediately. The police has assured us that they will look into the case well,” said Mehruddin, adding that the videos show that all the boys, who formed the mob, were residents of Bajhera Khurd, a village comprising people from mostly the Hindu Rajput caste group.

The village had garnered attention in 2006 when farmers of the village had violently protested against forcible land acquisition. In the last few years, following the 2013 Muzaffarnagar riots, the area has seen large-scale communal polarisation and distrust between Hindus and Muslims has gained a lot of ground.

Mehruddin said that the family learned that Samiuddin was later dragged to a Hindu temple closeby and beaten again. Some of the panelists, who visited Hapur to meet the families, said that the Qasim’s lynching reminded one of the Mohammad Akhlaq’s lynching in Dadri. 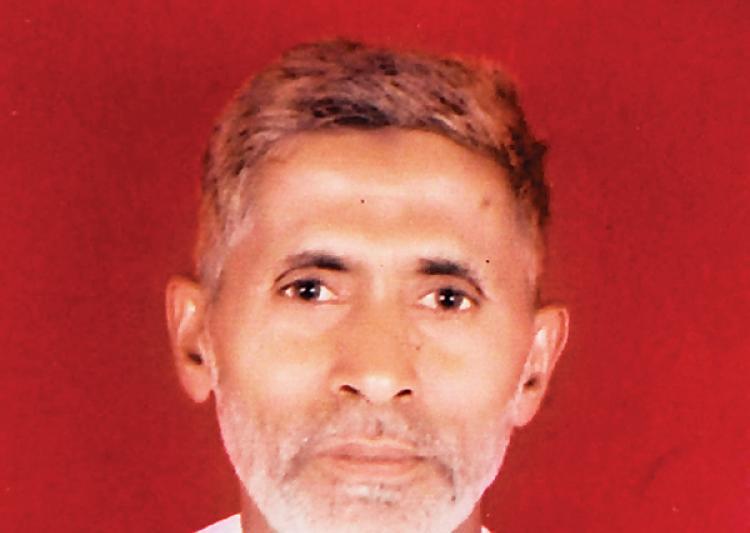 “Exactly like Dadri, some people decided at a temple that a cattle smuggler had come to the village and went in a group to attack Qasim who was visiting the village to buy cattle. The way the events unfolded make the lynching appear as a pre-planned attack,” Salim Engineer, secretary-general of Jamaat-e-Islami Hind, who visited Hapur.

Almost on the lines of the protest by the Jammu Bar Association in support of the accused in the Kathua rape case, the Hapur Bar Association also took out a march immediately after the arrest of two individuals in the Qasim murder case. It demanded that the two should be released it believed that they were arrested wrongly.

Responding to such adverse circumstances of both the family to secure justice, eminent lawyer Colin Gonsalves said, “The FIR is really weak. We must ensure a plan of action, given all the institutions have acted in a partisan manner. One, we should get the investigation transferred outside UP as it happened in Mirchpur killings. Two, the families should get a separate FIR registered in Delhi high court. The law has these provisions. Since such incidents are on the rise, there needs to be a concerted effort to ensure justice.”

Apoorvanand, a Delhi University professor, said, “Today is the first anniversary of Md.Junaid murder. (Junaid was killed in a train before Eid in a similar incident.) In that case, too, it was being said that it was not a communal murder and that a small fight for a train seat escalated into a bigger one. Here, too, it is being said that the lynching was a case of road rage.”

He added that in the Hapur murder, it must be noted that the murderers themselves filmed the attack and then circulated it to make it go viral on social media. “What is this if not a clear message for the minorities? The Hindu Right is telling the minorities that we will kill you, film the killing, get pleasure out of it, and you will not be able to do anything. The murder is being transformed into a theatrical spectacle.”

Senior journalist Arfa Khanum Sherwani said that the regular incidents of lynching and violence against the Muslims indicate a clear political plan to alienate the minorities from the agrarian economy of rural India.

In the last week, four such communal lynching incidents – three in Jharkhand and one in Hapur – have rocked the country. While some panelists believed that such incidents are being planned to polarise the country on religious lines ahead of 2019 polls, almost all said that these will have much longer-term impact on Indian society. “There will be anarchy in society as violence against minorities is getting normalised, attaining legitimacy slowly. This happens when the government forgets its rajadharama, practice divisive and partisan politics, and work towards strengthening politics of hatred. This will kill us all.”