Protesters who had gathered under the aegis of radical Hindu right-wing groups claimed they were opposed to the construction of a Haj house for reasons that had nothing to do with "a particular religion." Their own words suggested otherwise. 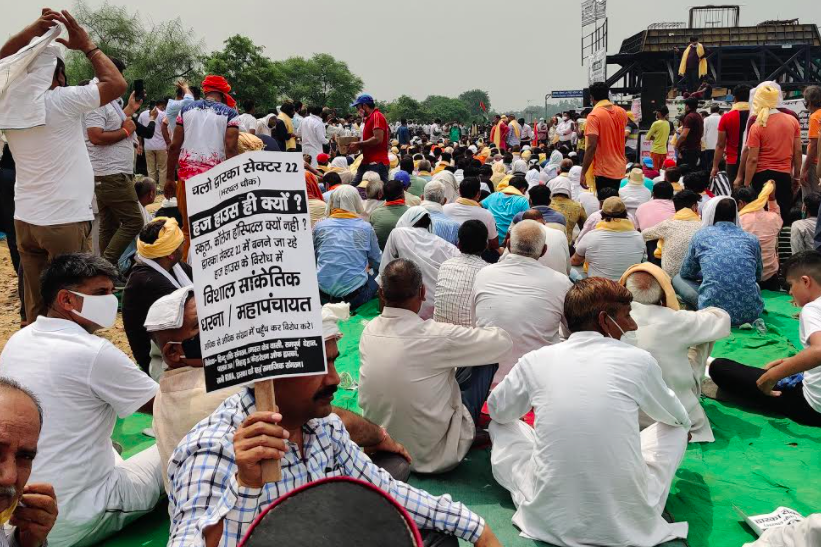 The Dwarka protest against the construction of a Haj house. Photo: Ismat Ara/The Wire

New Delhi: More than 1,000 people gathered in response to a call given Friday by Hindu right-wing organisations to protest against the construction of Delhi’s first Haj house at Dwarka’s Bharthal Chowk in the west of the national capital.

The project had been envisioned in 2008 by Delhi’s then chief minister Sheila Dikshit.

With roughly 20,000 pilgrims going on Haj every year, Delhi is the largest departure point for the pilgrimage in the country.

Dikshit had laid the foundation stone of the Haj house and allotted a plot for it measuring around 5,000 square metres in Dwarka’s Sector 22.

A decade later, in 2018, the Arvind Kejriwal government allocated Rs 94 crore for the project.

The building was supposed to be centrally air-conditioned and with state-of-the-art facilities, separate dormitories for men and women, VIP suites, immigration counters, prayer halls, a library, kitchen and dining area.

The library was to display a history of the Haj pilgrimage from India.

Though work on the building has still not begun, radical Hindu right-wing groups are protesting against its construction, claiming it would “disturb” the peace of the area.

Friday’s protest, or “mahapanchayat” against the construction of the Haj house was organised by several groups, including Hindu Shakti Sangathan, Samast Chetra Vaasi, Sampoorn Dehat and Federation of Dwarka. 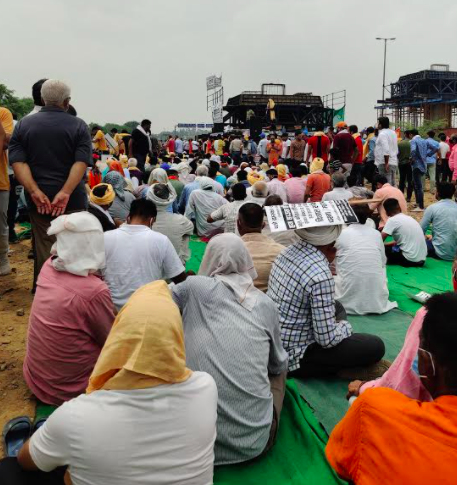 Residents of nearby villages participated in the protest, held near the Cluster Bus Depot Photo: Ismat Ara/The Wire

Residents of nearby villages such as Palam, Dhool Siras, Bharthal, Pochanpur and Bamnoli, as well as people living in DDA colonies in the area participated in the protest, held near the Cluster Bus Depot.

At around 10 am, people began to gather at Bharthal Chowk, chanting “Jai Shri Ram.” Within an hour, nearly a thousand had gathered. Some of the banners they held said, “Why a Haj house? Why not a school, a college or a hospital?”

Speakers at the gathering said that the construction of the Haj house would “translate into terrorism and Muslim domination” in the country. Some also objected to taxpayers’ money being used to build a religious site.

Delhi, unlike other states, does not have its own Haj house. There is, however, a dilapidated building near Turkman Gate on old Delhi known as the Haj Manzil, which is entrusted with helping Indian Haj pilgrims with submission of their documents, distribution of passports, camping arrangements, and other necessities, before the annual Haj pilgrimage to Saudi Arabia every year.

The Haj Manzil, operating out of the first floor of the Delhi Urban Shelter Improvement Board building, is little more than a shelter and does not have enough space to accommodate the tens of thousands of pilgrims who make their way to Mecca. All year round, DUSIB uses this space as a community centre, but during the time of the Haj, it is used for operations related to the pilgrimage.

In the absence of a Haj house, pilgrims, along with their family members, are made to stay in transit camps that are built at the Ramlila Maidan and Dargah Faiz Ilahi every year.

Mukhtar Ahmed, chairperson of the Delhi State Haj house, while speaking to The Wire, said that there is an acute shortage of space.

“People from Delhi as well as nearby states go for the Haj pilgrimage via Delhi, and we always have trouble in managing the crowds due to lack of space,” he said.

Also read: How the Haj Committee of India Managed Applications During COVID-19

But the protestors who assembled in Dwarka are adamant.

“They will have to kill us first if they want to construct this Haj house,” he said.

When asked why he was so opposed to the idea, he said, “It is unfair to the Hindu community, it is torture for us. If Muslims need a Haj House, why can’t it be constructed where they live, in places like Nizamuddin or Okhla?” 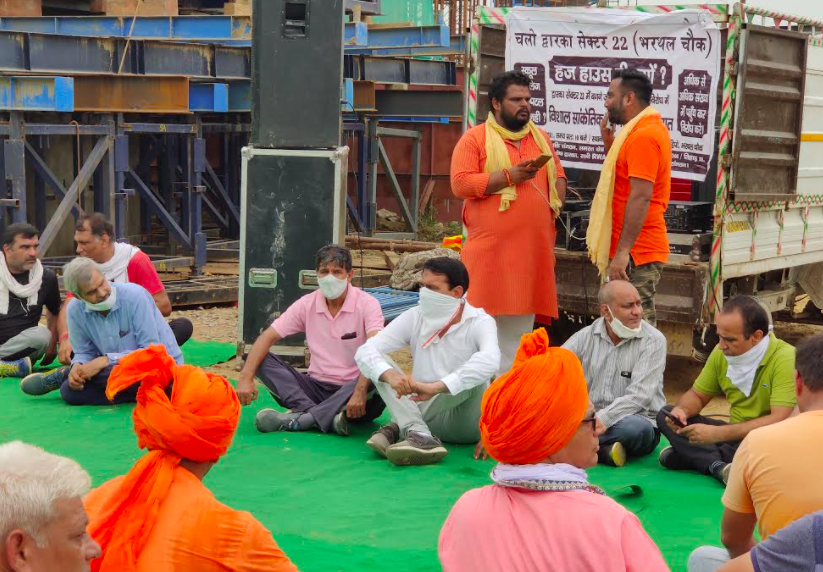 ‘On Thursday, a residents’ federation in Dwarka wrote to Lieutenant Governor Anil Baijal, who is also chairperson of the Delhi Development Authority (DDA), asking him to cancel the land allotment.’ Photo: Ismat Ara/The Wire

The choice of place, according to a politician close to the late Sheila Dikshit, was prompted by its proximity to the airport, from where Haj pilgrims could easily depart for their journey.

A few hundred metres, near the stage of Friday’s protest, one of the organisers announced that the protest is completely “non-political” and that they have no hatred towards the Muslim community. “But a Haj house should not be made near our place of residence, where 99% of the population is Hindu,” he added.

On Thursday, a residents’ federation in Dwarka wrote to Lieutenant Governor Anil Baijal, who is also chairperson of the Delhi Development Authority (DDA), asking him to cancel the land allotment.

“There is strong apprehension that the brotherhood, harmony and peace in the society, apart from law and order will be disturbed, if the said HUJ HOUSE is allowed to construct (sic) in Dwarka and further more there will be every possibility of riots, migration of Hindus and repetion of situation like Shaheen Bagh, Jafrabad and Kashmir,” B.P. Vaishnav, secretary of the All Dwarka Residents Federation wrote in the letter to Baijal.

‘Answer them with the same brick’

While Friday’s protest was on, Dharmendra Singh, a member of the Bajrang Dal, stood in a corner asking Hindus to “unite.” The Bajrang Dal is affiliated to the Vishwa Hinndu Parishad, which, in turn, is linked to the Rashtriya Swayamsevak Sangh (RSS).

When asked what he will do if the government does not stop the construction, Singh said, “Let them try and put even one brick here, we will answer them with the same brick.”

About 100 metres away, another man announced over a microphone that this is a peaceful demonstration and symbolic protest. “We are only requesting the administration to listen to us,” he said.

Hundreds of police personnel sat or stood in the area. As the crowd swelled, the police remained oblivious to the violation of COVID-19 protocols.

Dharmendra Singh continued, “We Hindus cannot keep suffering. Slowly, demographics will change and Muslims will dominate the country. Besides, this place is close to the airport, so it is sensitive. If a Haj house is constructed here, terrorists will hide in it…” 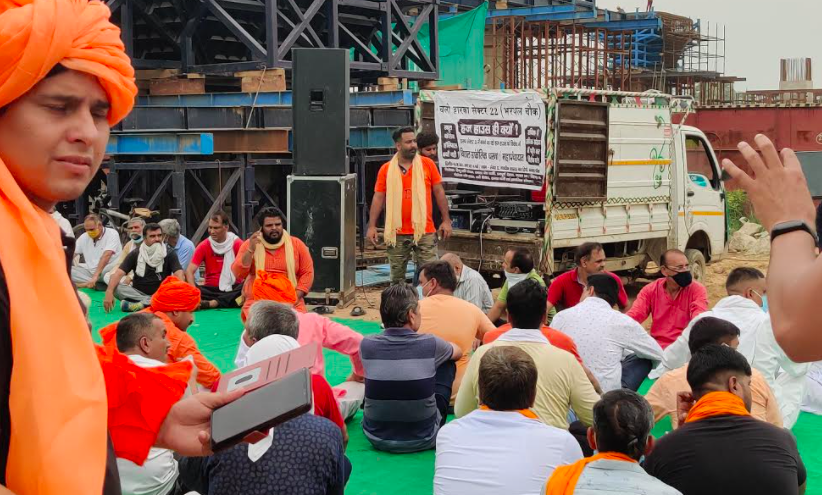 Dayanand, another Bajrang Dal member, said that the main problem was not with the construction of the Haj house, but the “intention behind it.”

Referring to Manish Sisodia’s statement on building a university on the disputed Ram temple spot in Ayodhya, Dayanand said, “What is the need for a Haj house? Why not make a university here? Or a hospital?” He added that this was an attempt by the Aam Aadmi Party to “appease” the Muslim community.

“Haj house is an excuse, they want to breed terrorists,” another protester shouted.

‘Not about any religion’

Geeta Nayak, among the handful of women at the protest, held a banner saying ‘Why a Haj house?’

While most people at the protest had come from nearby villages, she came from the DDA SFS flats in Dwarka. “All the people who live in the DDA flats are against the construction of this Haj house,” she said.

Also read: Behind the Social Media Face of a Violent Hindutva Activist Lies an Entire Ecosystem of Hate

Her husband, Prakash Nayak, insisted on speaking. “Make a hospital, college, school, laboratory, anything but a Haj house. We don’t want to plant a tree that will later give us thorny fruits,” he said.

When asked what this meant, he elaborated, “It will give birth to terrorism in our otherwise peaceful area.”

He then added quickly, “It is not about any religion.”

Besides “breeding terrorists,” said Nayak, the roads will see more traffic if a Haj house is constructed here. “What if Muslims capture this area and start protesting here, like they did in Shaheen Bagh? Even the administration was unable to clear it for many months…” he said. 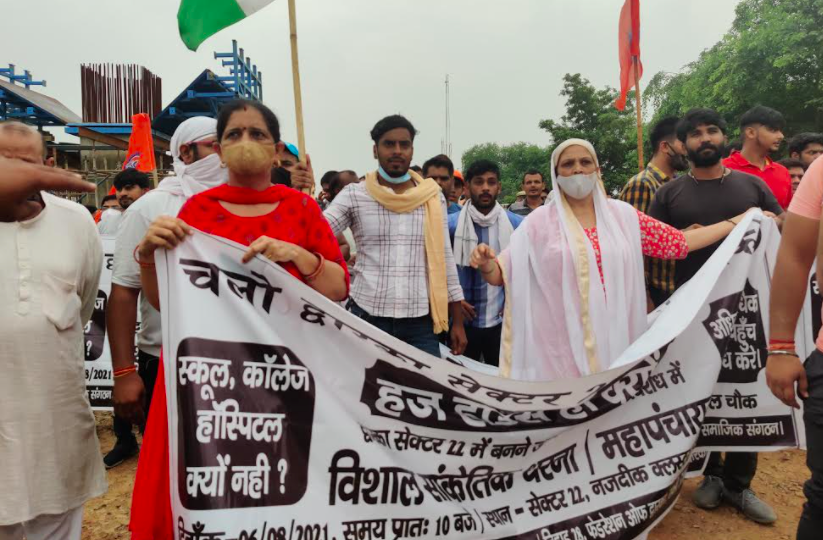 “All the people who live in the DDA flats are against the construction of this Haj house.” Photo: Ismat Ara/The Wire

A man, listening to Nayak’s words, jumped in. “It’s not just that. Do you not realise that almost Rs 100 crore of taxpayers’ money has been allocated for this Haj house? This is our money, not the Delhi government’s money,” he says.

“Why should the government make a Haj house for the Muslims? They themselves should contribute money and get it constructed in their own area, such as in Okhla or Nizamuddin. Our area is peaceful, we want it to remain peaceful,” he added.

Over a loudspeaker, a woman said, “Ram is Allah, and Allah is Ram…we don’t have any objection to the Haj house, but they should make it somewhere else, not in our area.”