The report claims that the violence was anti-Muslim in nature, led by right-wing organisations and conducted in the presence of the police. 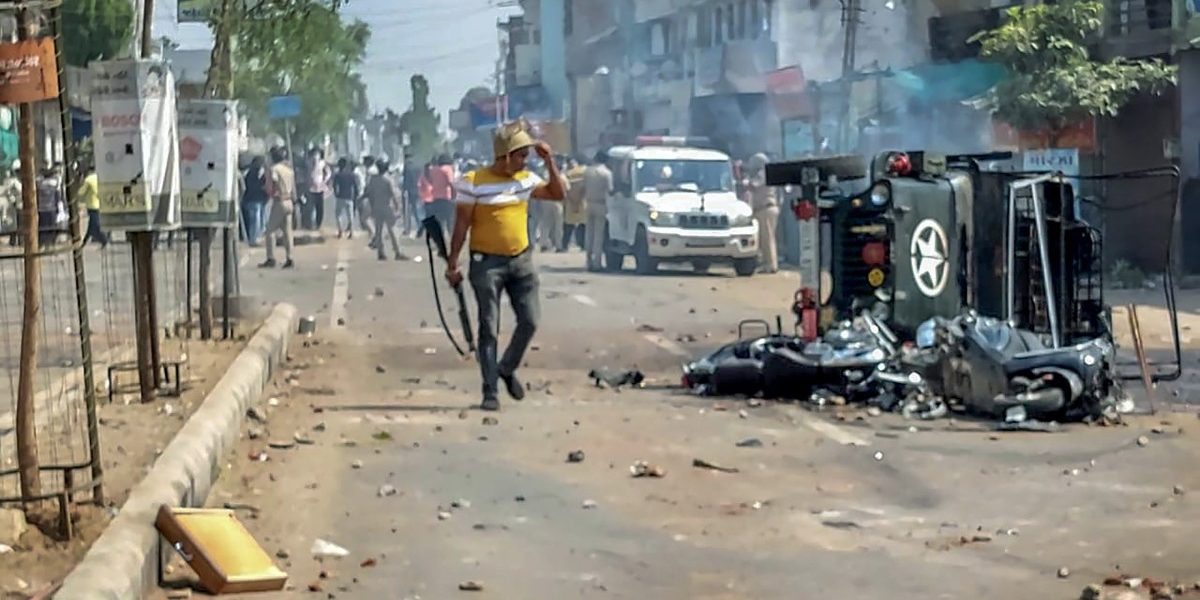 FILE IMAGE: A policeman near a burnt vehicle as police try to control the situation after a communal clash during the Ram Navami procession, in Himmatnagar, Sunday, April 10, 2022. Photo: PTI

New Delhi: A recently released fact-finding report on the communal riots that broke out in Gujarat’s Himmatnagar and Khambhat towns during the Hindu festival of Ram Navami on April 10, 2022, places the responsibility for the violence squarely on the Hindu community. The report claims that the violence was anti-Muslim in nature, planned by the Hindu community and took place in the presence of the police.

The report is based on interviews conducted by the fact-finding team of Neha Dabhade, the deputy director of the Centre for Study of Society & Secularism, and Hozefa Ujjaini, a social activist and the director of the NGO Buniyaad, who  visited Khambhat and Himmatnagar between July 25 and 27, 2022.

As The Wire had reported on April 11, on the afternoon of Ram Navami in Himmatnagar, some Hindus reportedly celebrated their festival by wielding swords as part of their processions. When the processions entered Ashrafnagar, a Muslim-dominated area located between two Hindu localities, Shakti Nagar and Mahavir Nagar, the Hindu men apparently provoked the local Muslims, leading to communal violence.

While the incident appears to be random in nature, the fact-finding report shows that the violence had been planned by the Hindus in the procession. The report also dismantles the modus operandi employed by the Hindus to create the sense of communal tension as the Ram Navami procession entered Ashrafnagar area.

When the fact-finding team interacted with locals in Ashrafnagar, they learned that while the Ram Navami festival in Himmatnagar has been celebrated with processions for close to three decades, this year it was planned differently.

For one thing, the locals told the team, the procession, which had usually been scheduled for about 4 pm over the past 28 years, was scheduled this year for 1 pm, about the time for the Muslim zuhrnamaz.

There was another change this year. In the past, the organisers of these processions had always been local Hindus. But this time, there were two processions, one organised by the Antar Rashtriya Hindu Parishad and Bajrang Dal and the other by the Vishwa Hindu Parishad, both right-wing Hindu organisations.

The processions this year also had a large number of non-local participants, unlike in previous years. Witnesses of the violence told the fact-finding team that on April 10, 2022, at least 1,200 to 1,500 Hindus had arrived at around the time of namaz, with tractors carrying speakers that blared Hindu religious songs and the participants of the processions chanting slogans like “Hindustan mein rehna hoga, toh Jai Shri Ram kehana hoga (If you want to stay in India, you will have to chant Jai Shri Ram)!”

As the processions neared a mosque in Ashraf Nagar, these provocative slogans were chanted louder, the witnesses said. Given the fact that the processions had arrived during namaz, the slogans instigated a scuffle between the two communities.

According to some of the witnesses who were quoted in the fact-finding report, the participants of the procession, many of whom were armed with swords, according to Kanak Jhala, leader of the Antar Rashtriya Hindu Parishad (ARHP), began pelting stones at the locals. In the violence that exploded, 18 stalls and two houses, all belonging to Muslims, were set aflame.

The report suggests that the police had been present when the violence broke out and had in fact accompanied the processions. Witnesses claimed that the police personnel did nothing to stop the violence. Further, the report says, the police did not allow the fire brigade to douse the fires that burned Muslim properties.

Video screengrab of a shop after it was set on fire at Himmatnagar in Gujarat during a Ram Navami procession.

The violence caused by the processions in Ashraf Nagar led to clashes in other areas of Himmatnagar, such as Hasan Nagar, which has a mixed population of Muslim and Vanjara residents.

Hasan Nagar had earlier been occupied solely by the Vanjara community, but in 2011, the government allotted houses to low-income groups under the Awaas Yojana or housing scheme, changing the composition of the neighbourhood to Muslims, Vanjaras, Devipujaks and so on.

Since that time, the neighbourhood has been tense, though the tension was not communal in nature. However, the Vanjaras have recently been demanding a separate area for themselves and when the violence spread from Ashrafnagar to Hasan Nagar, it suggested to the fact-finding team that, using the Ram Navami processions as a cover, several avenues had been found to attack the Muslim community.

Rafique Qureshi, a resident of Hasan Nagar, told the fact-finding team that on April 10, a couple of the Vanjara residents of Hasan Nagar, including one Chagan Vanjara, had participated in the Ram Navami processions in Ashrafnagar and then returned to Hasan Nagar and abused and hit Muslims in the neighbourhood.

According to Qureshi, when the Muslims called the police to stop the violence, the police lobbed tear gas at a Muslim boy instead and arrested some local Muslims, returning them to their homes the same evening.

Meanwhile, members of the Vanjara community told the fact-finding team that Muslims had attacked their houses with petrol bombs on April 11. Chagan Rupa Bhai Vanjara told the team that he immediately called the police and received a prompt response.

During their visits to Khambhat to document various aspects of the communal tensions which had led to at least 40 arrests in April, the fact-finding team learned that on the night of April 10, the police had brutally beaten Muslim women, injuring them on their thighs and chests. According to the report, the police had also beaten one Zakirbhai Shabir Memon, a 50-year-old muezzin and a patient of cancer, the same night while dragging him out of his house. Memon’s son, Gulam Sarvar, 23, who is partially visually impaired, was also beaten and arrested at the same time. Another local, Dr Altaf Gulamnabi Menon, 36, was also arrested that night. 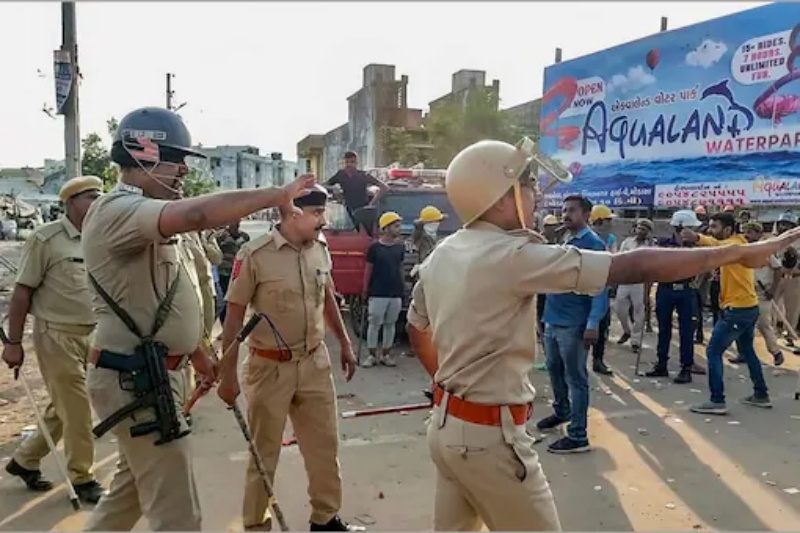 These three men were detained for four days by the police and were warned not to inform the court about the injuries they had sustained while in detention. They also shared with the fact-finding team that they had been publicly humiliated by the police, as they were taken to court in ropes while the Hindu accused were discreetly taken to the judge.

While the riots were clearly identity-centric, designed to display the dominance of the Hindu community and send a message of violence and fear, the slogans did more than just vilify the minority community. Rather, the slogans aimed to force Muslims to convert to Hinduism, according to the locals who spoke not just to the fact-finding team, but also to The Wire.

Also read: Amidst the Spate of Demolition and ‘Anti-Encroachment’ Drives, What Does the Law Say?

Despite the violence that took place on April 10, the Muslim residents of Ashrafnagar have continued to live amicably with their Hindu neighbours. According to the report, the local Hindus do not hold the Muslims responsible for the violence and understand that the riots were the result of politics. The two communities are doing business again and interacting every day in market places.

In Hasan Nagar however, the relationship between the Muslims and Vanjaras has hit a new low. The Vanjaras refuse to coexist with Muslims, citing stereotypes like polygamy and fundamentalism to support their dislike of the community. The report quotes Chagan Vanjara and his neighbours Dushyant and Badu as saying that Muslims are supported by their wives to marry multiple women and that Muslims in India receive funds from Islamic countries, nurture separatist tendencies and build schools and madrasas to promote fundamentalism.

The fact-finding report also points to the questionable nature of the first information reports (FIR) filed against the rioters. In Himmatnagar, for example, divisions A and B of Ashrafnagar police station filed FIRs that named only Muslims for rioting, though members of both the communities had thrown stones, the Hindu processions had included armed men and only Muslim-owned properties were torched.

Coincidentally, similar communal riots had taken place in the states of West Bengal, Rajasthan, Madhya Pradesh and Jharkhand on Ram Navami this year.